• Tua in trouble: Dolphins quarterback Tua Tagovailoa is in the NFL concussion protocol for the third time this season after suffering a head injury late in the first half against the Packers.

• Joe Burrow is on a roll: The Bengals quarterback earned his second-best single-game grade of the season (91.6) and was the highest-graded quarterback of Week 16. He recorded a season-high six big-time throws and averaged 7.2 yards per attempt. 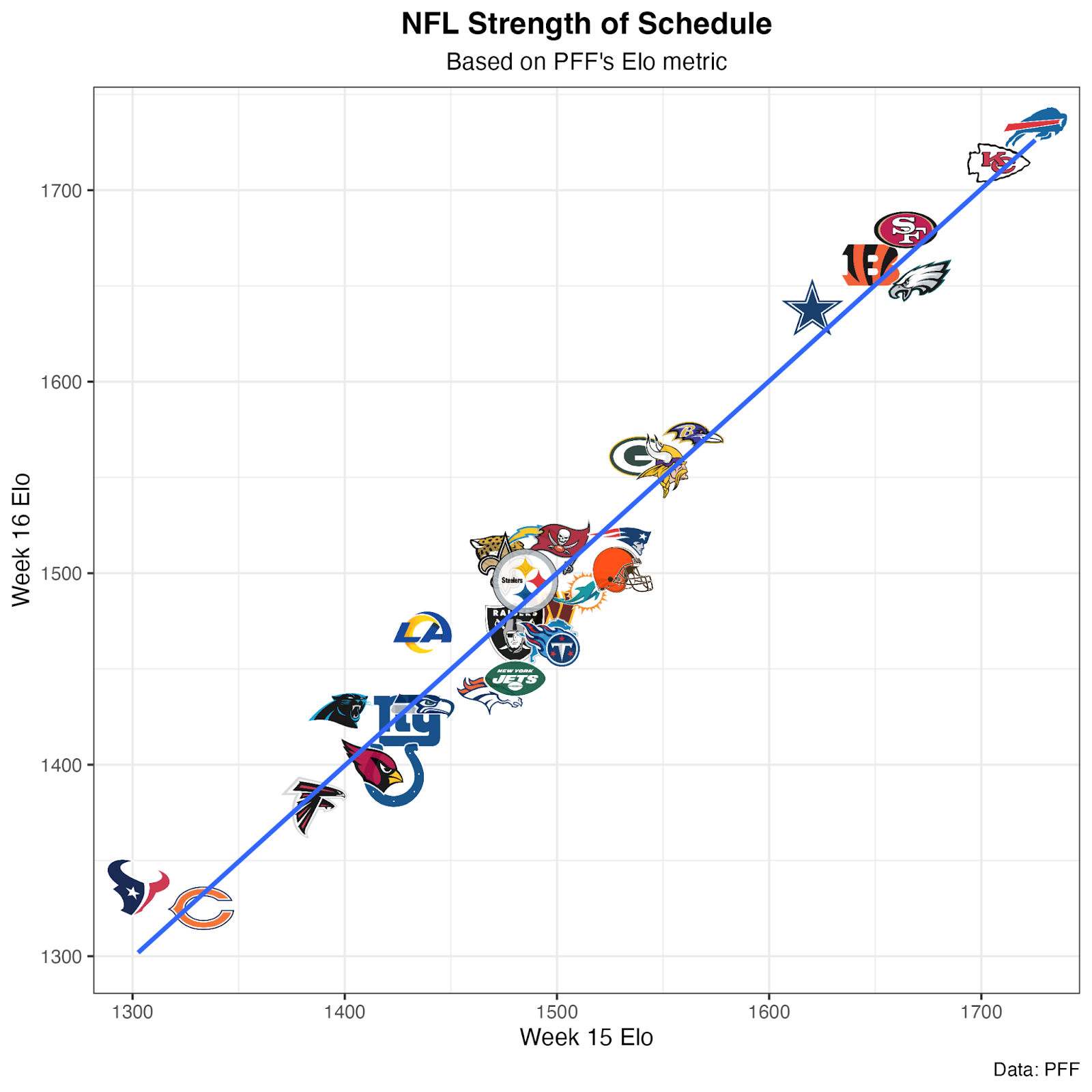 The Falcons, Browns and Colts were eliminated from playoff contention, joining the Texans, Broncos, Bears, Cardinals and Rams.

Joe Burrow is on a roll: The Bengals quarterback earned his second-best single-game grade of the season (91.6) and was the highest-graded quarterback of Week 16. He recorded a season-high six big-time throws and averaged 7.2 yards per attempt.

Nathaniel Hackett fired: The Broncos head coach was relieved of his duties after the blowout loss to the Rams. Quarterback Russell Wilson threw three interceptions, posting his lowest passing grade since Week 10 (50.4) and the second-highest turnover-worthy play rate of his season (8.3%).

T.Y. Hilton emerges: In the Cowboys' Week 16 win over the Eagles, Hilton’s 52-yard reception set up a game-tying CeeDee Lamb touchdown catch. The veteran pass-catcher played just 12 snaps — and ran just five routes — but he earned his best PFF grade since Week 11 of the 2018 season (93.7).

Texans' second win of the season: Quarterback Davis Mills earned just a 54.0 passing grade, but he posted a season-high average depth of target (11.6). His receivers didn't drop a single pass for the third consecutive game. His defense allowed -0.283 EPA per play, the seventh-best mark of the week.

The Packers rank sixth in the NFL in EPA generated on offense since Week 10, and QB Aaron Rodgers has quietly crept into the top 10 in PFF grade.

Central to the Packers' rise has been the emergence of wide receiver Christian Watson, who ranks 27th at the position in PFF grade (73.7) and has caught seven touchdown passes since Week 10.

The rookie out of North Dakota State is top-five in yards per route run against man coverage and yards after the catch per reception. He has added a new explosive dimension to the offense.

The Titans have now lost four straight, and their season arguably hit rock bottom when they lost to the lowly Texans this past week.

Malik Willis’ 39.8 passing grade would be the worst in the NFL had he played enough to qualify for a ranking — and that's a serious issue for Tennessee's playoff hopes, considering Ryan Tannehill is still nursing an ankle injury.

The Broncos' Christmas Day display might have been the worst performance by any team this season, and it sparked the firing of head coach Nathaniel Hackett. Nothing new needs to be said about the Russell Wilson experiment — upcoming NFL drafts can’t come soon enough for Broncos fans.

Loss to the Eagles OL: A week after losing QB Jalen Hurts to a shoulder injury, the Eagles lost right tackle Lane Johnson to an abdominal injury in the Week 16 loss to the Cowboys. The veteran lineman ranks fourth among tackles in PFF WAR this season (0.317).

Tua in trouble: Dolphins quarterback Tua Tagovailoa is now in the NFL concussion protocol for the third time this season after suffering a head injury late in the first half against the Packers.

The Dolphins passer looked in complete control in the first half, completing nine of his 12 attempts for 229 yards (19.1 YPA) and one score. Despite his 13.3-yard average depth of target, he recorded an adjusted completion percentage of 81.8% and just one turnover-worthy play.

It was an entirely different story in the second half, where he went 7-of-13 for 81 yards (6.2 YPA) and three interceptions. Over the final 30 minutes, his average depth of target shrank to 8.8 yards, but he put up an adjusted completion percentage of just 58.3% and three turnover-worthy plays.

The Miami offense generated just -0.184 EPA per play, the third-worst single-game mark of the season. They couldn’t score or stop the Packers from scoring in the second half.

The former No. 2 overall pick finished with the highest turnover-worthy play rate of his career (9.5%) and a 30.2 PFF grade. Mercifully, Mike White will return to the starting lineup for Week 17.

49ers are on a hot streak: Amid the eight-game win streak, Elijah Mitchell and Deebo Samuel could return for the 49ers' game against the Raiders this week. Since Week 9, the Niners rank sixth in the NFL in EPA per play on offense. According to PFF Greenline, Kyle Shanahan's squad has the eighth-easiest remaining schedule. 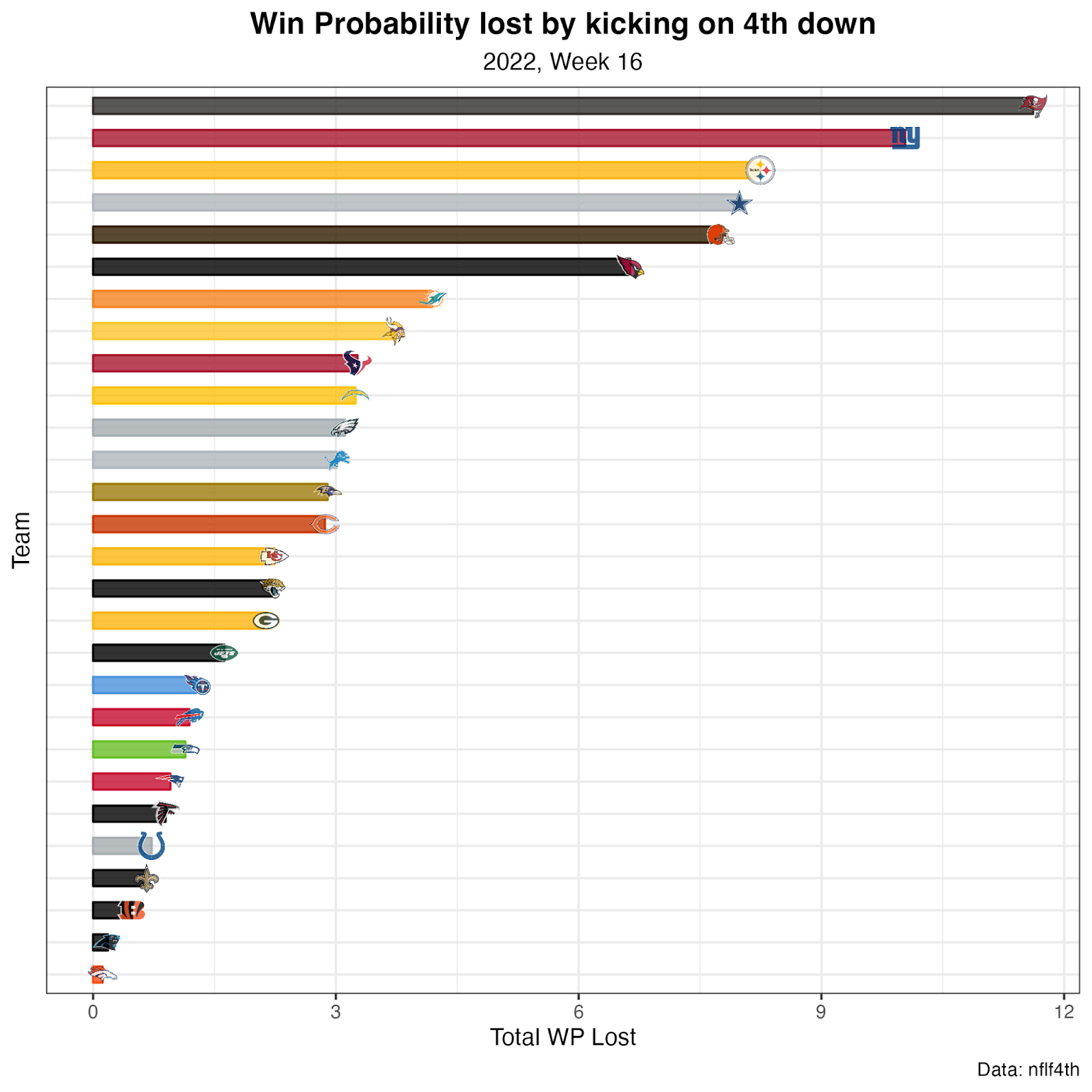 A Christmas miracle: The Buccaneers barely beat the Cardinals in Week 16, ultimately settling for an overtime field goal to win the game. The two teams combined to attempt seven field goals and 11 punts this week.

No punts in Dallas: The Eagles-Cowboys game featured just one punt and six field-goal attempts. This is not surprising, given that the Cowboys (44.4%) and Eagles (43.6%) are third and fourth, respectively, in successful drive rate this season.

Colts' failure on third downs: The Colts were the only team not to convert any third downs last week. Jeff Saturday's team ranks second league-wide in drives per game at 11.7, but only 29.1% of their drives have ended in a score, which is 30th. 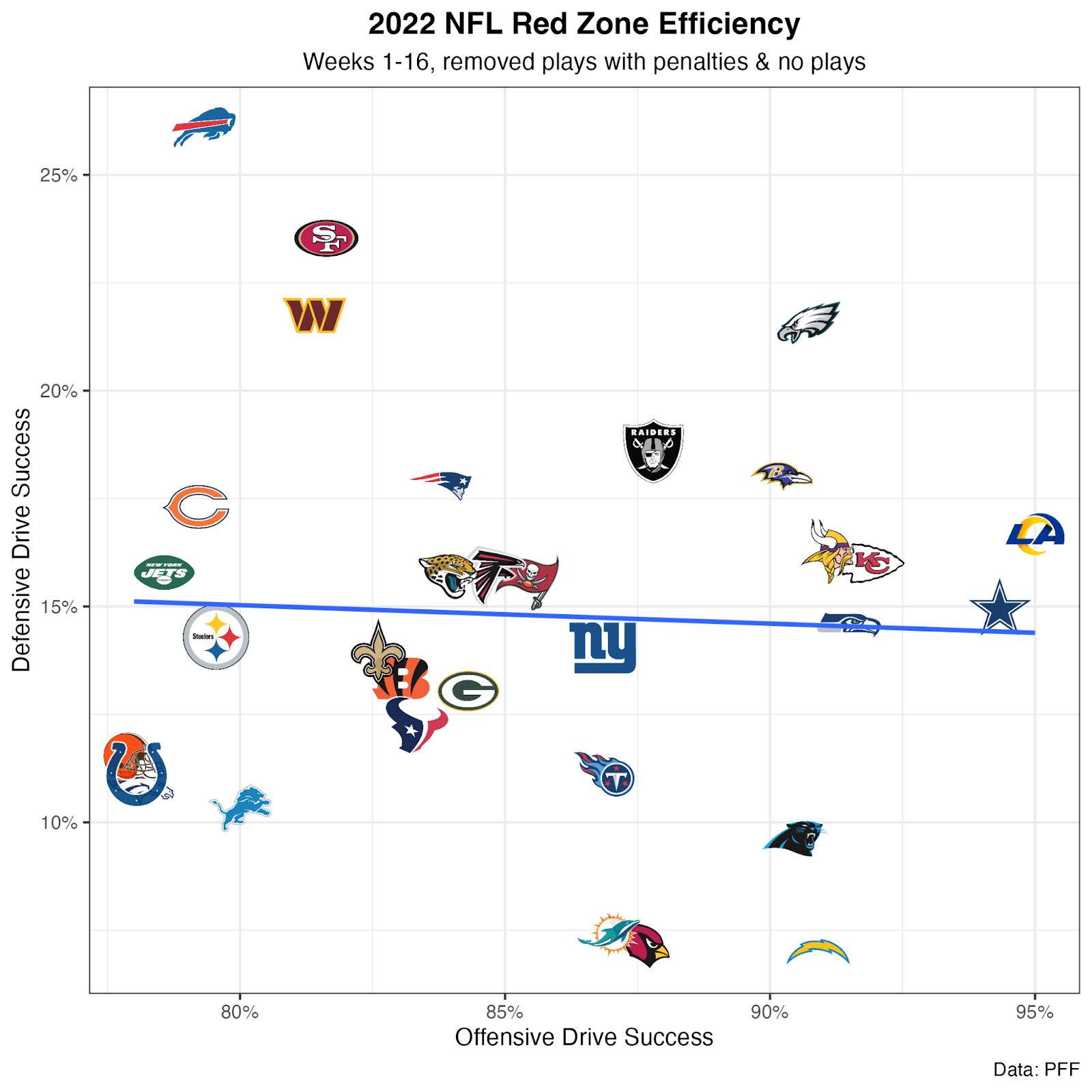 The Panthers' prowess: In their win over the Lions, the Panthers were successful on 44.1% of their plays and converted the highest percentages of first (40.5%) and second (52.4%) downs this week.

Bottom of the barrel: The Colts are 30th in the league in successful drive rate this season (29.1%), better than only the Titans and Broncos. This is not elite company to be in.

Rams getting by: Even with their quarterback change, the Rams continue to be first in the league in offensive success rate (44.6%). They’ve been able to convert to a new set of downs at about a league-average rate since Stafford’s departure (29.7%, 18th in the NFL) and convert fourth downs at a rate higher than the league average (85.7%).