PFF Senior Analysts Sam Monson and Steve Palazzolo reviewed the film, advanced stats and grades to offer their key takeaways from Week 17 of the 2019 NFL season.

Gilmore has been one of the best defenders in the NFL this season. He had been talking up his own Defensive Player of the Year candidacy, and heading into the game against Miami was allowing a passer rating roughly the same as just throwing the ball at the dirt all season. Parker though didn’t care. With Ryan Fitzpatrick happy to give him a chance to make a play against anybody, Parker caught eight passes for 137 yards, more than 100 of which came against Gilmore. That marks the first time all season anybody has taken Gilmore for more than 100 receiving yards and was also the most catches he’s surrendered all season. Gilmore’s had a phenomenal season, but that was a big blow to his DPOY case. 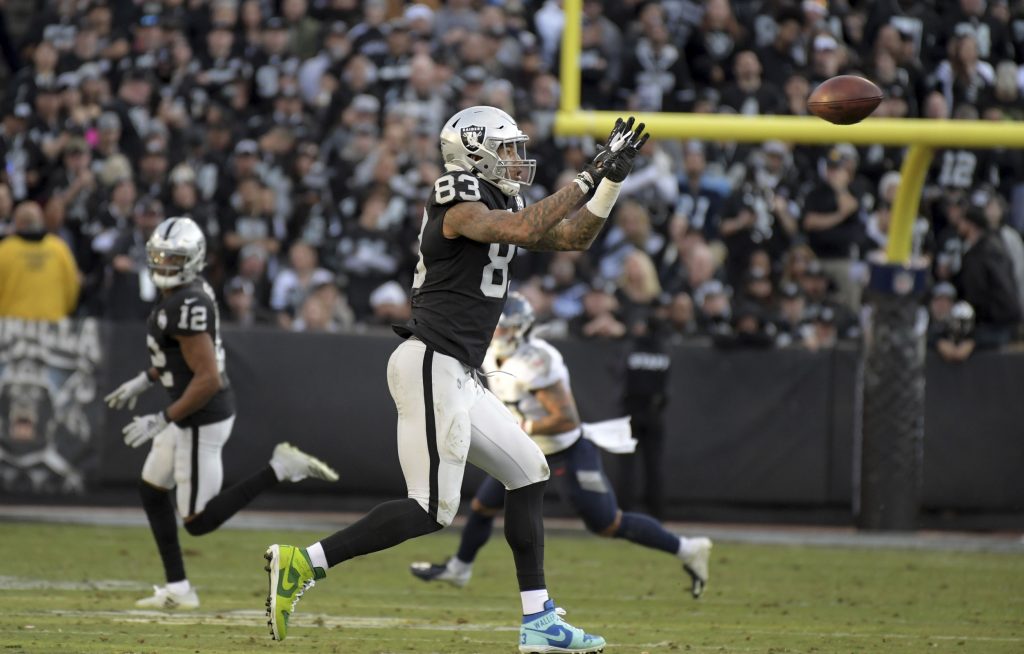 Darren Waller has become a legitimate matchup problem for defenses

One of the most surprising stories of the entire season has been Waller — a former college wide receiver in a triple option offense that barely ever passed the football — turning into one of the most dynamic receiving tight ends in the game. Waller, a sixth-round pick back in 2015, had been suspended multiple times during his time with the Ravens, but the Raiders signed him from their practice squad last year, and this year turned him loose as a game-changing weapon. Waller topped 1,000 receiving yards from that position, leading the team in targets, catches and receiving yards, and saved his longest catch of the season for Week 17 against Denver, breaking loose for a 75-yard gain.

All it took was the Bucs running out of receivers and Jameis Winston going down swinging to turn former first-round pick Perriman into a superstar over the last few weeks of the season. This week he posted the highest receiving total of his season (134 yards), marking the third time in as many weeks he topped 100 yards and posting what will likely be the best grade of the year for him once games are reviewed. Perriman made several huge catches including an insane jump-ball score in the end zone to show the kind of talent that made him a first-round pick in the first place. Perriman may be on his fourth team in the NFL already, but he’s just 26 years old and showed that he still has significant talent if a team gives him a chance.

Carlos Dunlap had a career year, and nobody noticed because he played on the Bengals

Aided by playing Cleveland’s disastrous offensive line, Dunlap had his second three-sack performance of the season in the second win the team managed all year. Dunlap will finish the season with the highest grade he has managed since at least 2012, and depending on how the grades are finalized on All-22 review, may have posted the best year of his entire career. His run defense was phenomenal this season, and he has had excellent games of pass rushing, but the second half of the year was one of the best-graded of any edge rusher in the league, he just did it almost completely without notice because the Bengals weren’t winning.

From Titans WR A.J. Brown taking over games to 49ers WR Deebo Samuel being used as an offensive weapon all over the formation, rookie wide receivers will have a major impact in the playoffs. Brown finished the regular season averaging 20.2 yards per reception, including an incredible 8.9 yards after the catch per reception. Samuel is right there with him with 8.5 YAC/reception and he’s added 186 yards and four scores on the ground. Ravens WR Marquise Brown caught 46.7% of his deep (20-plus-yard) targets as an outside and slot vertical threat while Seahawks WR D.K. Metcalf must be accounted for in the vertical and back shoulder game. It’s a great year for rookie wideouts and they will have a huge role as the playoffs unfold.

We are used to seeing the Packers start off strong before tapering off, but this was the opposite against the Detroit Lions. Green Bay was down 17-3 well into the third quarter, QB Aaron Rodgers was missing throws all over the field, but he stayed aggressive and continued to take downfield shots that eventually paid off. Rodgers finished just 3-for-17 for 81 yards on 20-plus-yard throws, but two of the three completions were touchdowns that brought the Packers back to tie the game at 17. The Packers have showed that they can win games in a variety of ways, despite Rodgers’ decrease in efficiency, but perhaps an aggressive, downfield-throwing Rodgers is what they’ll need during the playoffs. 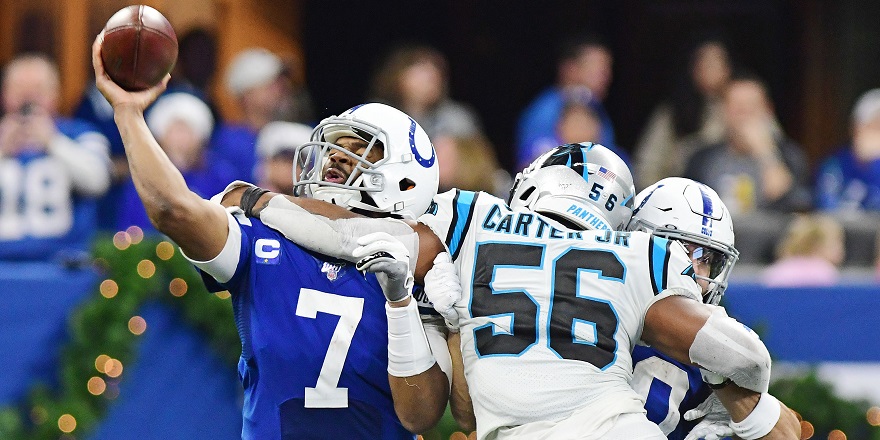 They hype was real for Brissett early in the season as he got off to a great statistical start, though the PFF grades were not bullish on it continuing. His stats regressed down the stretch to match his actual level of play, and the Colts are faced with a decision at the quarterback position moving forward. Brissett was thrust into a difficult situation as QB Andrew Luck retired just before the season, but in two years as a starter (2017 and 2019), Brissett has posted PFF grades of 62.4 and 58.7, certainly not enough to instill confidence that he’s the signal-caller of the future in Indianapolis.

Outside of a blip against the Atlanta Falcons a few weeks ago, the 49ers continue to handle every challenge. They went on the road to defeat the Seahawks with a goal-line stop, earning the No. 1 seed throughout the playoffs. Their road to the top has also included a shootout win against the No. 3-seeded New Orleans Saints and a dismantling of the No. 2 Green Bay Packers. Previous performance may not be a great indicator of what is going to happen in the playoffs, but the 49ers have answered the call against the league’s best all season, and the No. 2-graded overall team in PFF grading will be difficult to beat at home in the playoffs.