NFL Week 11 Team of the Week

Calvin Ridley and Mark Andrews both turned in outstanding performances in Week 11, joining several other NFL standouts on PFF's Week 11 Team of the Week in the process. 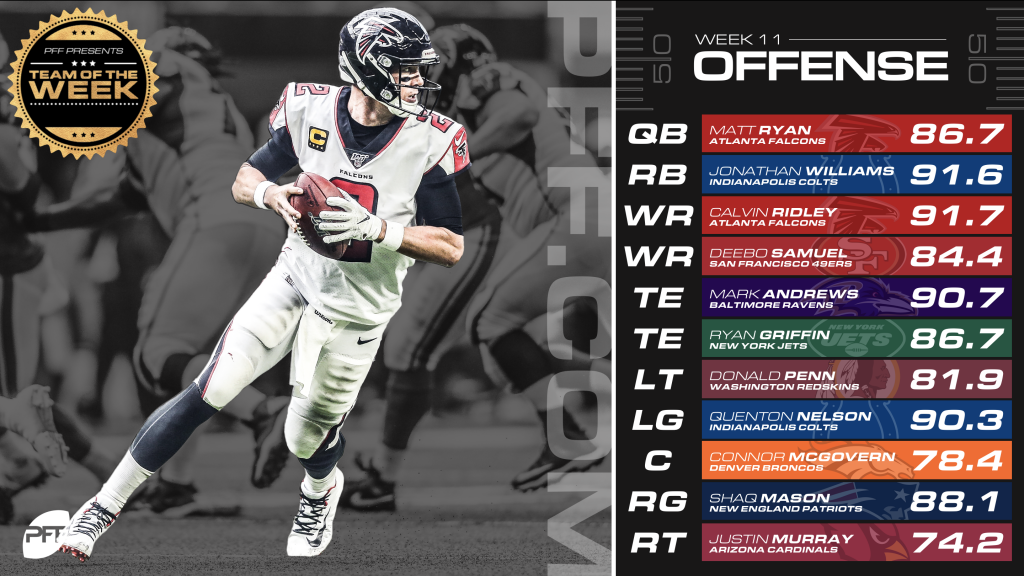 Ryan completed four of his five targets of 20-plus air yards for 144 yards on his way to an impressive 84.0 PFF passing grade in Week 11. He was also near-flawless under pressure, completing 10-of-13 passes for 205 yards and a touchdown on pressured dropbacks.

Williams forced six missed tackles and gained 107 yards after contact on the ground. He logged a 31-yard reception, as well.

Ridley caught all eight of his targets for 143 yards and a touchdown against Carolina on Sunday. He also finished the game with five first-down receptions and a perfect 158.3 passer rating when targeted.

Samuel caught eight of his nine targets for 134 yards, including 49 yards after the catch, against the Cardinals on Sunday. He also forced two missed tackles and hauled in an absurd contested catch through defensive pass interference on the sideline.

Andrews caught all four of his targets for 75 yards and a score in the Ravens' blowout win over the Texans on Sunday. He also forced two missed tackles and gained 49 of his yards after the catch.

Griffen caught all five of his targets for 109 yards, four first downs and a score against Washington on Sunday. He earned an elite 91.2 receiving grade for his efforts.

Penn allowed just one pressure in 26 pass-blocking snaps against New York on Sunday. He also earned an impressive 81.3 run-blocking grade.

The keg stand celebration was special, but Nelson put on an even better display between the whistles in Week 11. He recorded a 90.3 overall grade and an 88.5 run-blocking grade against Jacksonville while also allowing zero pressures across 31 pass-blocking snaps en route to an 87.6 pass-blocking grade.

McGovern earned a 74.2 run-blocking grade and allowed zero total pressures across 48 pass-blocking snaps against Minnesota on Sunday. His 78.4 overall grade led all centers in Week 11.

Mason led all Patriots players in overall grade at 88.1 in the team’s 17-10 win over the Eagles in Week 11. He earned an 84.5 run-blocking grade and allowed just one pressure from 50 pass-blocking snaps. 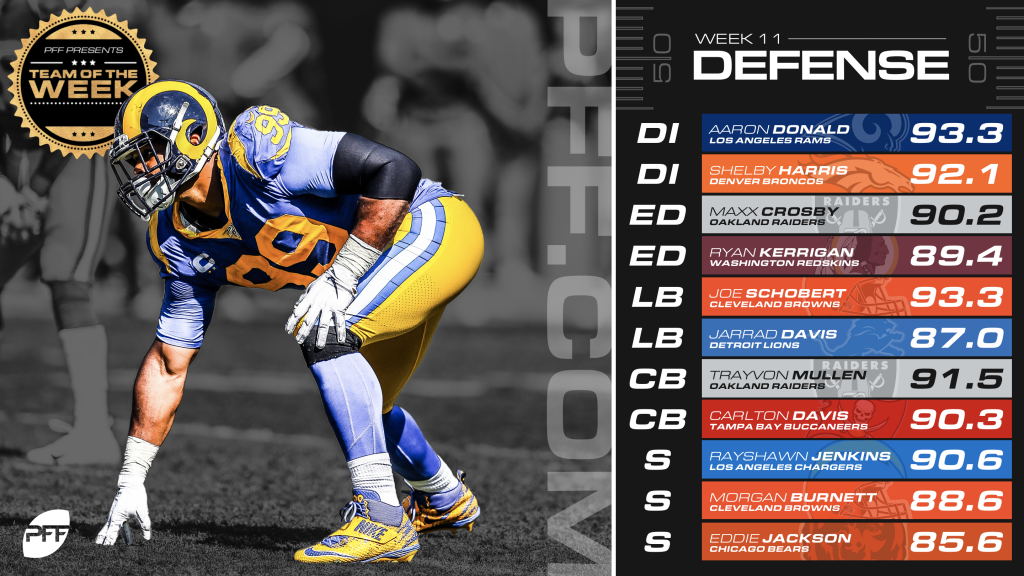 As we’ve come to expect, Donald was a one-man wrecking crew against Chicago on Sunday Night Football. He totaled eight pressures, including two sacks, and finished the game with a 92.6 pass-rush grade.

Harris was fantastic in the trenches against Minnesota. He recorded three sacks from 24 pass-rush snaps en route to a 90.8 pass-rush grade.

Kerrigan recorded three total pressures and a 90.9 pass-rush grade against the Jets on Sunday. He also earned an 89.4 overall grade for his efforts.

Schobert's standout performance on Thursday Night Football was the best we graded from an off-ball linebacker in Week 11. He totaled five pressures, made five defensive stops and allowed four receptions from seven targets for 20 yards and two picks.

Davis was dominant in run defense against Ezekiel Elliott and the Cowboys on Sunday. He recorded three defensive stops, zero missed tackles and a 94.9 run-defense grade.

Mullen allowed just four receptions from seven targets for 17 yards against Cincinnati on Sunday. He also recorded three defensive stops, one interception and a pass breakup.

Davis allowed just two receptions from three targets for 11 yards against New Orleans. He also recorded a pass breakup and a 90.7 coverage grade.

Jenkins intercepted a Patrick Mahomes pass intended for Demarcus Robinson while playing the middle third in cover-3 on Monday night. He also recorded two defensive stops on the night.

Burnett allowed just three receptions from five targets for 26 yards against the Steelers on Thursday night. He also recorded an interception and a pass breakup in coverage.

Jackson wasn’t targeted in coverage, but he was a force against the run. He recorded three defensive stops and a 90.1 run-defense grade against the Rams on Sunday night.