For two weeks in a row, our No. 1-ranked NFL team has changed.

The Philadelphia Eagles‘ Week 10 loss to the 4-5 Washington Commanders moves Jalen Hurts & Co. down the rankings. Their struggles on offense — highlighted by three fumbles — allowed the Commanders to take control and end their perfect record.

Nick Sirianni's squad earned their second-worst team receiving grade of the season (58.5) and generated a season-low -0.125 expected points added (EPA) per play. They were also held to 98 rushing yards, their second-lowest mark of the year.

Elsewhere around the league, the Buffalo Bills‘ Week 10 loss to the Minnesota Vikings meant their chances of making the playoffs decreased from 95% to 92%. Conversely, the Detroit Lions‘ recent results have increased their playoff chances from 1.5% to 4.8%.

Jeff Saturday's first win as an NFL coach increased the Indianapolis Colts‘ playoff odds from 16% to almost 25%. They’ll face the 8-1 Eagles this week, so we’ll see if their good fortunes continue. After the Eagles, they take on the Pittsburgh Steelers and Dallas Cowboys, which could be winnable games.

The Commanders and Dolphins each move up four places after decisive wins in Week 10.

Dolphins passer Tua Tagovailoa seems to have found his stride in Miami and earned his fifth 80.0-plus PFF grade of the season (91.1). He didn't take a single sack, averaged just 2.35 seconds from snap to pass and left a zero in the turnover-worthy play column for the third consecutive week.

The Rams' loss to the Cardinals moves them to 3-6 and down to No. 22 in our power rankings. They’ve struggled on both sides of the ball this season. And with WR Cooper Kupp — their best player in terms of PFF WAR — suffering a high-ankle sprain on Sunday, their season may just be over. They have about a 10% chance of making the playoffs heading into Week 11.

No options for Justin Herbert: The Los Angeles Chargers just can’t seem to get healthy and are particularly thin at wide receiver. Down arguably their three top pass-catchers (again) this past week, Herbert is being forced to throw to third-stringers, and it’s cost the Chargers a great deal of WAR.

A huge loss for the L.A. Rams: Star wide receiver Cooper Kupp suffered a high-ankle sprain and will be placed on injured reserve. Kupp led the team's non-quarterbacks in PFF WAR through 10 weeks (0.367), and losing him may put the dagger in the Rams' season. They also lost two integral offensive linemen in Alaric Jackson and Chandler Brewer. Now, Stafford needs all the support he can get. 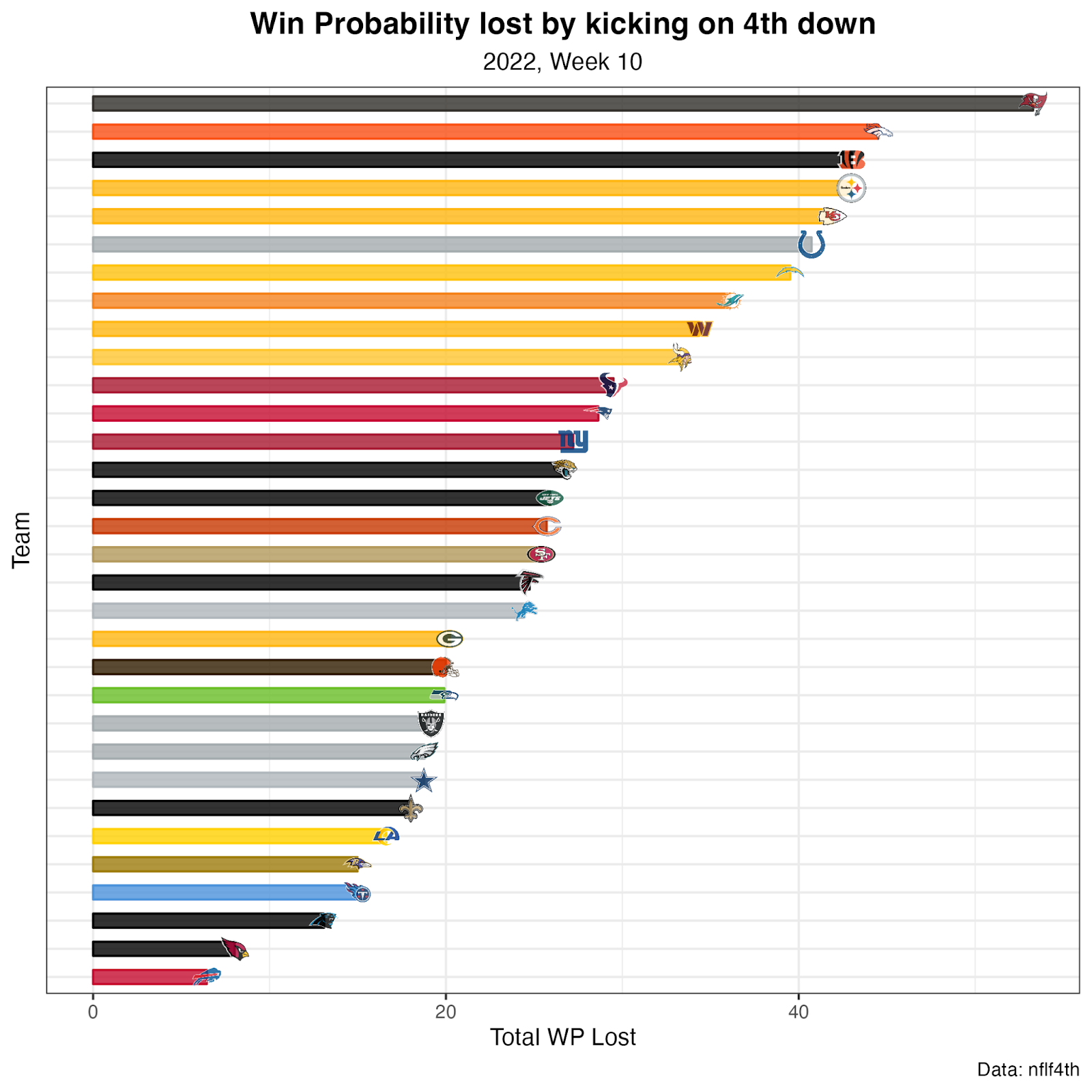 Put the ball in Tom Brady‘s hands: The Tampa Bay Buccaneers continue to leave points on the board by kicking on fourth downs. They seemed to be struggling before their Week 10 bout with the Seattle Seahawks but slowly seem to be figuring things out.

Todd Bowles should have confidence in his offense and QB to pick up these fourth-and-short situations rather than punting or kicking the ball away. 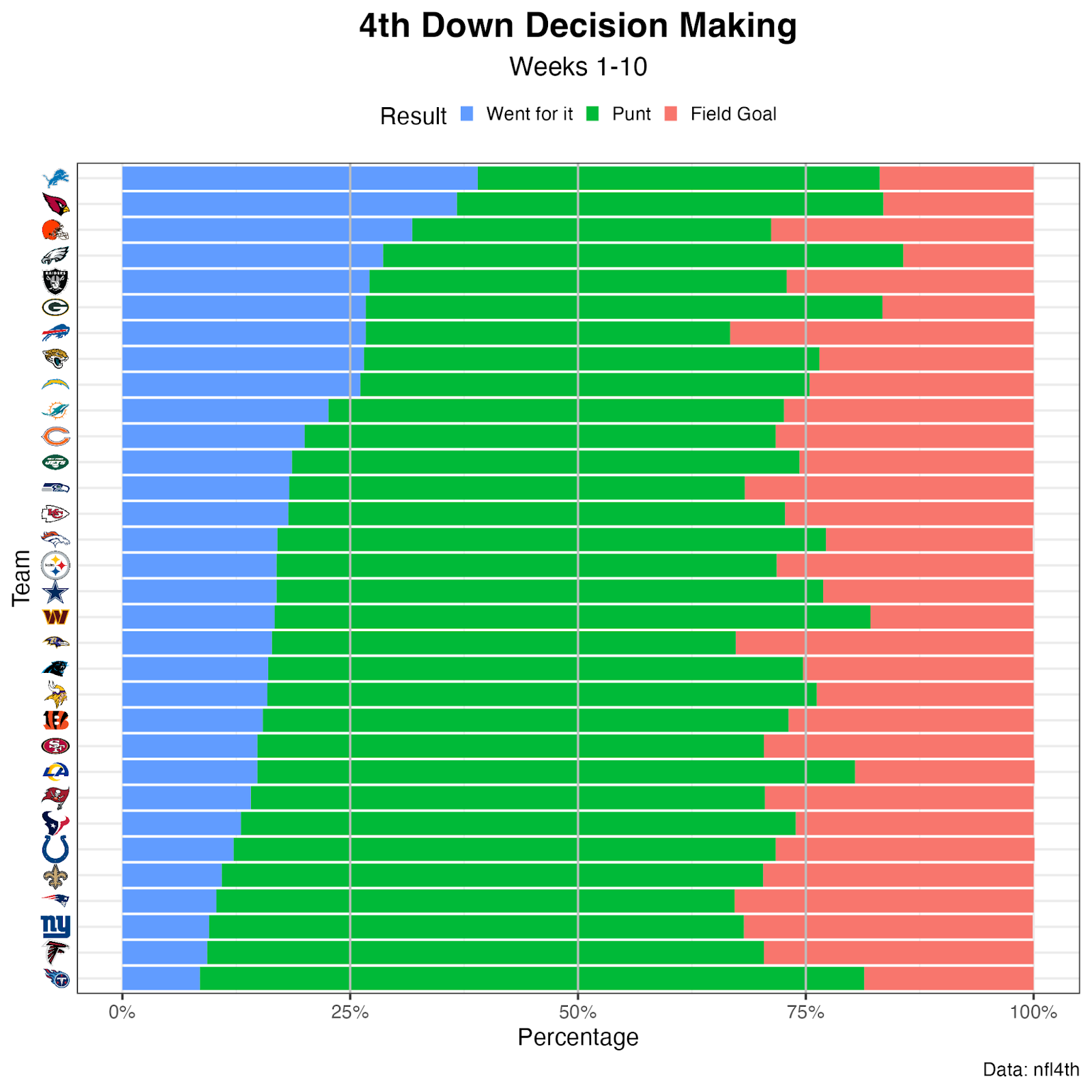 A day in the life of a Bills punter: The Bills have punted less than any team in the league this season, and no team has been better at retaining win probability by going for it on fourth down.

Sure, it helps to have a big-bodied QB who can throw and run for a first down in these situations.

How a team finishes can tell you a lot about their tenacity and ability to close out important games. So, we looked to quantify this facet of the game using play success, or the ability to convert to a new set of downs and score.

Unsurprisingly, our top three teams — the Bills, Chiefs and Eagles — lead in offensive success in both halves. In Week 10, the Vikings were successful on only 24.1% of their first-half plays against the Bills and 31.6% in the second half.

Despite losing to the Lions this week, the Bears were successful on 60% of their plays in the first half but only on 33.3% in the second. 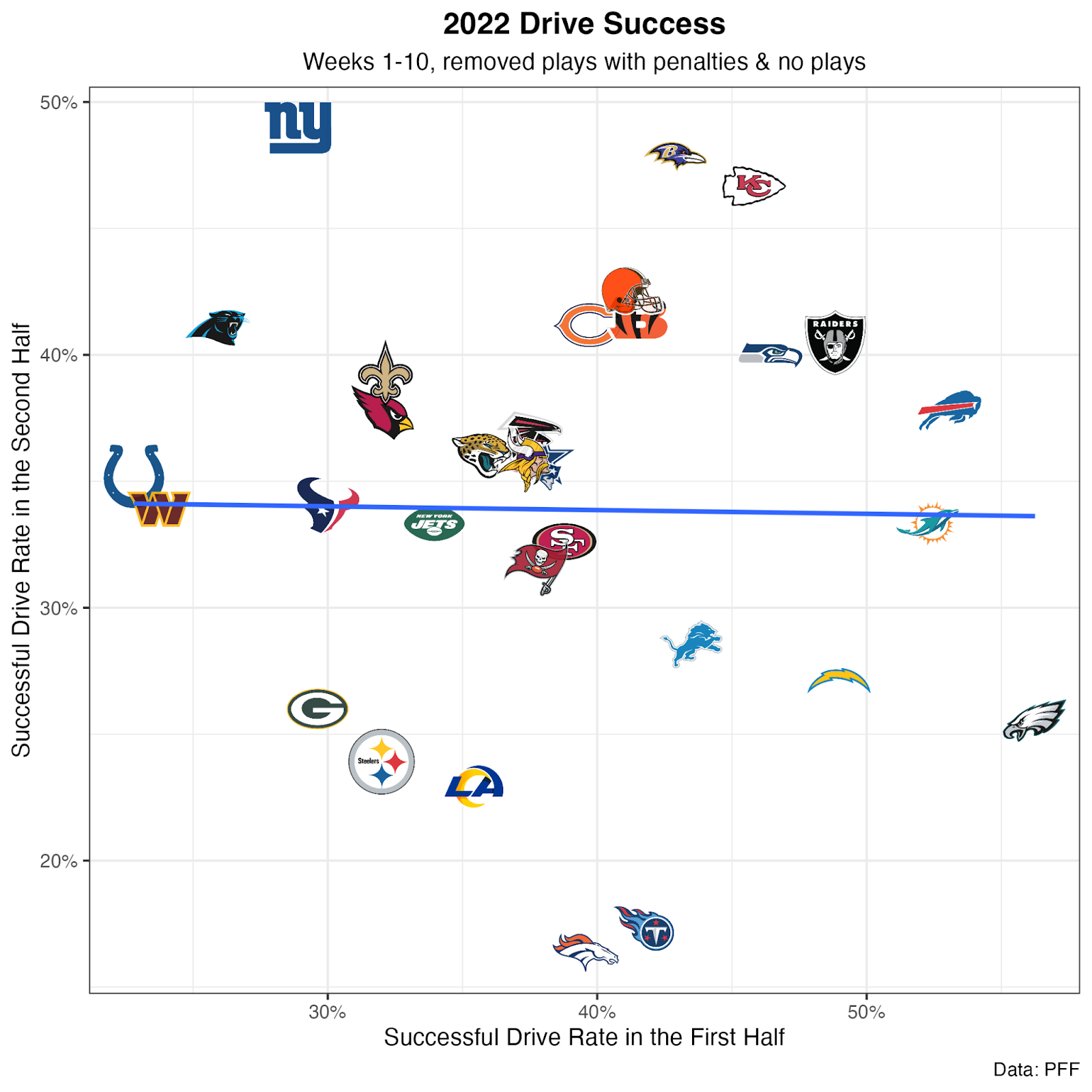