This year's free-agent class features an interesting group at wide receiver, including some very good No. 1 options like Amari Cooper and the aging A.J. Green and Emmanuel Sanders. My colleague, Kevin Cole, has already assessed the possible range of outcomes and respective value for the group, so in this piece, we want to look at the receivers from a usage standpoint with the aim of finding potential fits.

For this, we used the same receiver clustering that we first used in an article about the Super Bowl receivers. The following chart shows the first two principal components (which explain roughly two-thirds of the variance among receivers) with our eight highest-ranked free agent wide receivers' last two seasons highlighted. 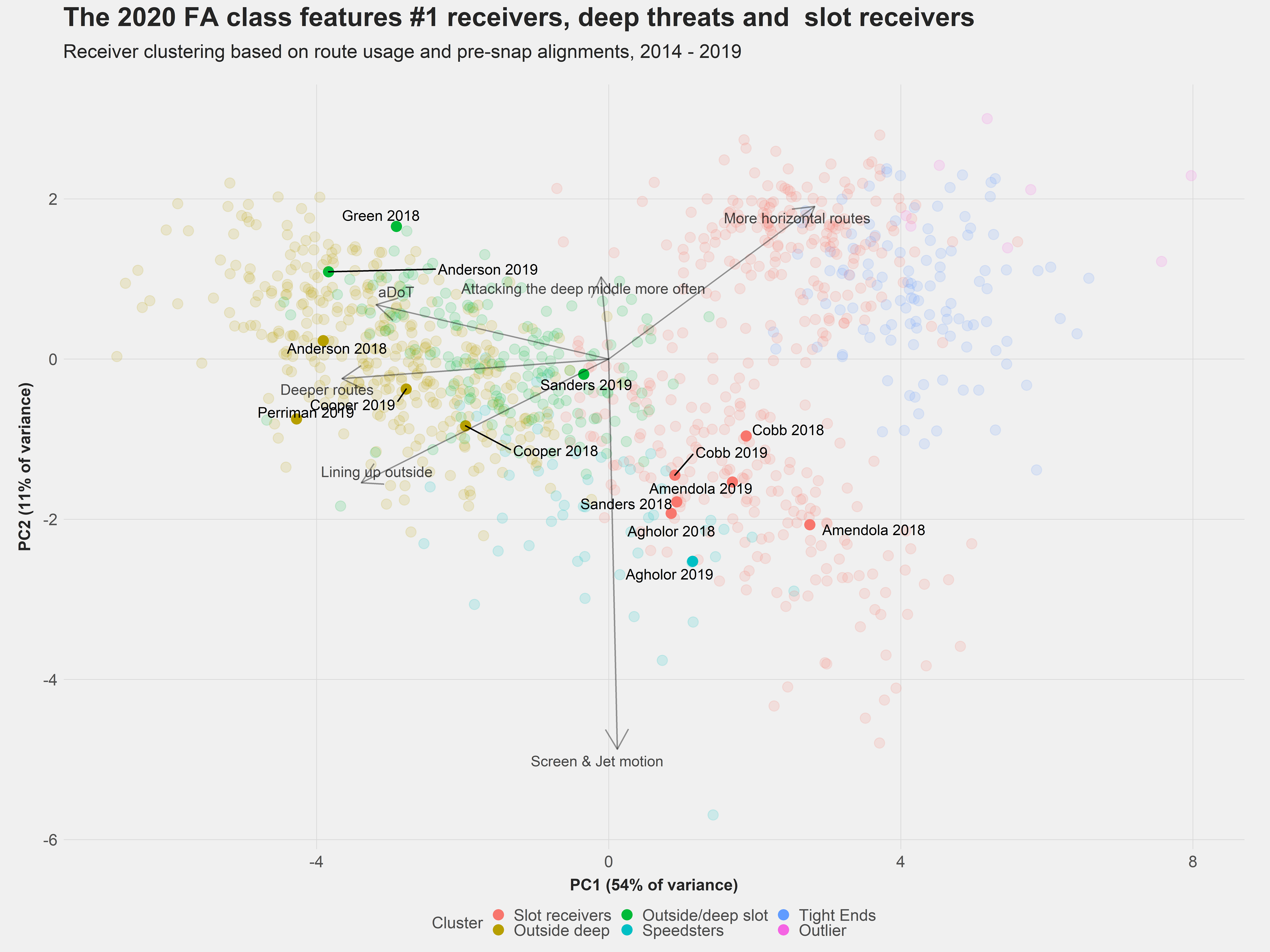 To find the best fits for the free agents, we ask the same question for each of the impending free agents: which teams would fill a hole by signing them? For example, to find the appropriate fits for Amari Cooper, we first throw away all receivers on teams' current rosters who are nowhere near the quality of Cooper, as measured by PFF receiving grade. For each team, we look at the remaining receiver on the roster who is closest to Cooper per our receiver clustering. The distance of this receiver to Cooper (in terms of usage) is used as a proxy for the urgency with which the given team should try to sign him. We will list the teams with the greatest urgencies as the best fits.

[Editor's note: Available to all of PFF's EDGE and ELITE subscribers, PFF's Free Agent Rankings Page consists of three-year grades, PFF WAR and in-depth analysis for all of the top NFL free agents. Contract information from our friends at Over The Cap is also available. Subscribe today for access!] 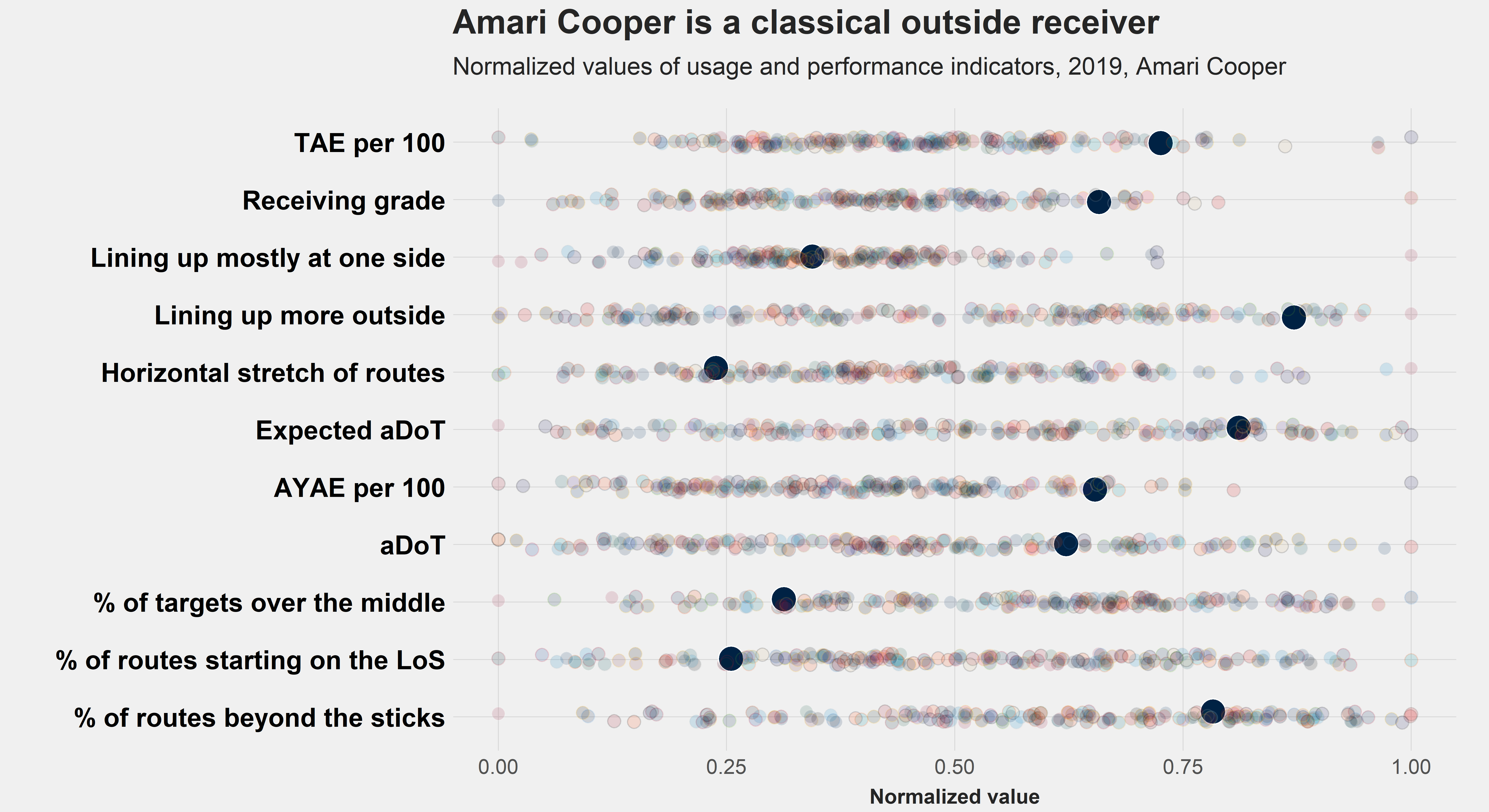 Amari Cooper earned 6.2 targets (TAE) and 73 air yards (AYAE) more than expected per every 100 routes he ran in 2019 (these metrics are explained here). Both are top-10 figures and indicate the volume of a No. 1 receiver. His route and target heatmaps don't indicate any discrepancies, either, as he earned his targets everywhere he ran his routes. 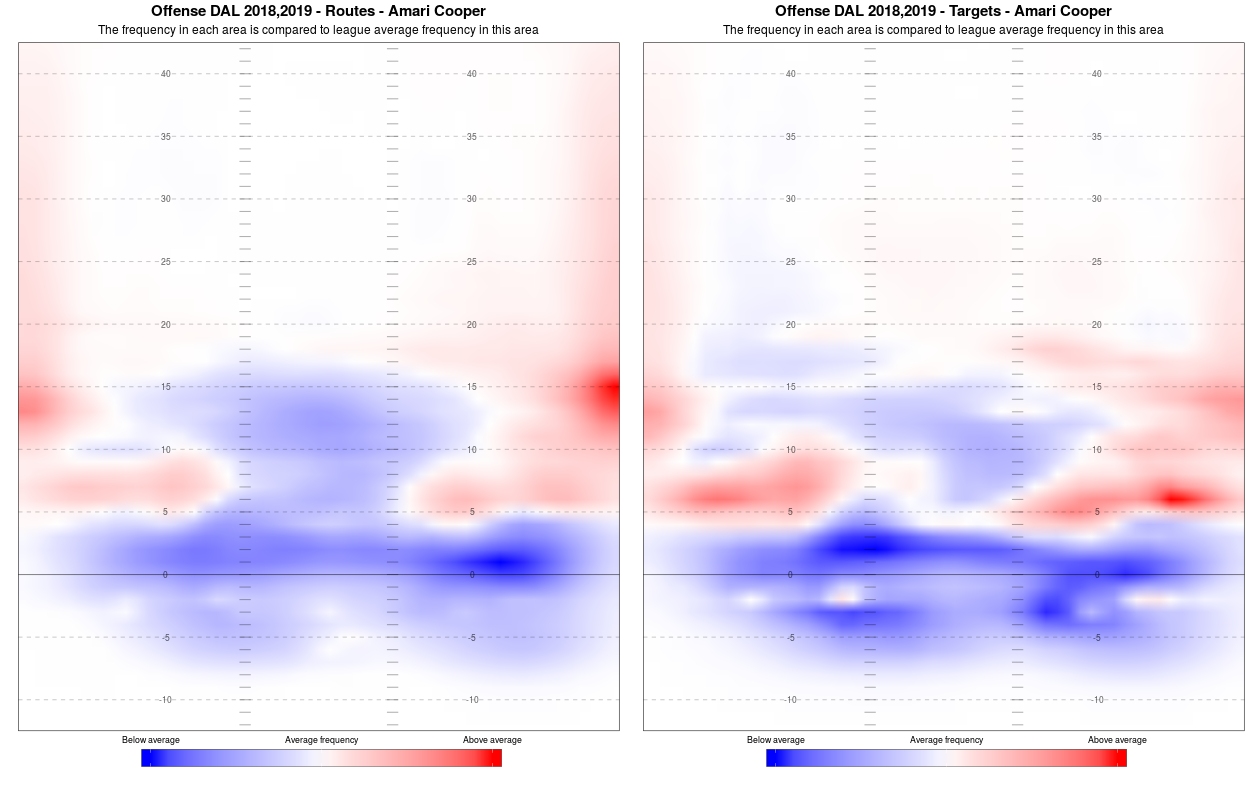 Cooper has graded within the 91st percentile over the last two years. So, to find a fit, we search for teams that don't have a receiver on their roster who has been used similarly to Cooper and has graded in at least the 70th percentile since 2018.

It's no surprise that the Dallas Cowboys themselves are the team most in need of signing Amari Cooper because they simply don't have a receiver on their roster who graded out in the 70th percentile over the last two years. The same is true for the Giants, Jets and Jaguars, who are each in dire need of a receiver as good as Cooper, no matter how they plan to use him.

The San Francisco 49ers have an elite receiving threat in George Kittle, but the potential loss of Emmanuel Sanders would leave a large void. Whether or not the 49ers are in the market for one of the top free agents depends on their confidence in second-year wideout Deebo Samuel, who could replace Sanders from a usage standpoint, but John Lynch and Kyle Shanahan will have to determine whether or not Samuel can also replace Sanders in terms of production. The New England Patriots have a good receiver in Julian Edelman, but he is not even close to Cooper in terms of usage, which makes the Patriots another team that could go after Cooper, even though we know that they would probably not enter a bidding war.