Don’t allow the fact that the NFL is pass-first steer your mind away from this concept: the way a team defends the run is a direct reflection of how it deals with the passing game.

Within that statement and philosophy is an explanation of why defenses typically start the teaching progression for any coverage against two-back offenses, even if the chances are that it won’t come up in game situations very often. The NFL played with two backs on less than 15% of all 2020 snaps, but it provides invaluable information for a defense.

First, we need to understand how the flow of the backs can influence pass protections for an offense. One of the most important things I’ve learned in this sport is that there are really only two forbidden words: always and never. That is to say, an offense is free to do whatever it pleases with the protection to its own benefit or detriment, but there are some trends you’ll recognize in the distribution of the backs and the style of protection.

For the purpose of this conversation about protections, we will assume that the three downfield threats — the tight end and two receivers — are running vertical routes of some kind and not crossing the field.

Here are some relevant definitions:

Full-Slide/Full-Turn Protection: A protection concept that calls for all five linemen to work in one direction and the backs or tight ends to block the edge away from the slide

Rollout/Sprintout: Both a style of quarterback dropback and protection designed to get the signal-caller out of a conventional pocket and on the move toward the sideline

Waggle: A play-action concept where the quarterback fakes the run and rolls out behind the running back. It is not common — most rollouts go opposite of the run fake

“Hot” reads: The potentially unblocked defender in the protection, an unconventional rusher who the pass blockers can’t be responsible for, who the quarterback has to be looking out for

As we covered in part one, split flow puts three receiving threats on one side of the formation (we will call it the strong side) and two threats opposite (weak side). This is a balanced, evenly distributed flow, and an offense usually likes to have a balanced protection, called a half-slide. The majority of the linemen will work to the side of the formation with more conventional pass-rushing threats, some will pick up the remaining conventional rushers on the opposite side and the backs will be responsible for unconventional rushers, such as blitzing linebackers or defensive backs. 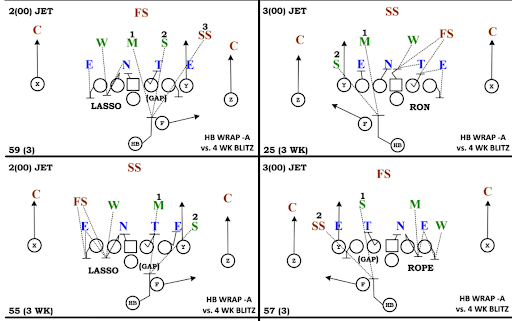 There are many variations of half-slide protections out of two-back sets. When both backs remain in the protection, the offensive line can work a four-man slide — where both guards, the center and one of the tackles are all working in one direction to pick up the four most dangerous threats on the strong side.