PFF is tracking training camp injuries and providing up-to-date analysis courtesy of injury analyst and former NFL trainer, Mario Pilato. We'll break down expected return timetables and outlooks whenever we have enough information to do so, making this the only source you'll need as you look forward to the 2021 NFL season. 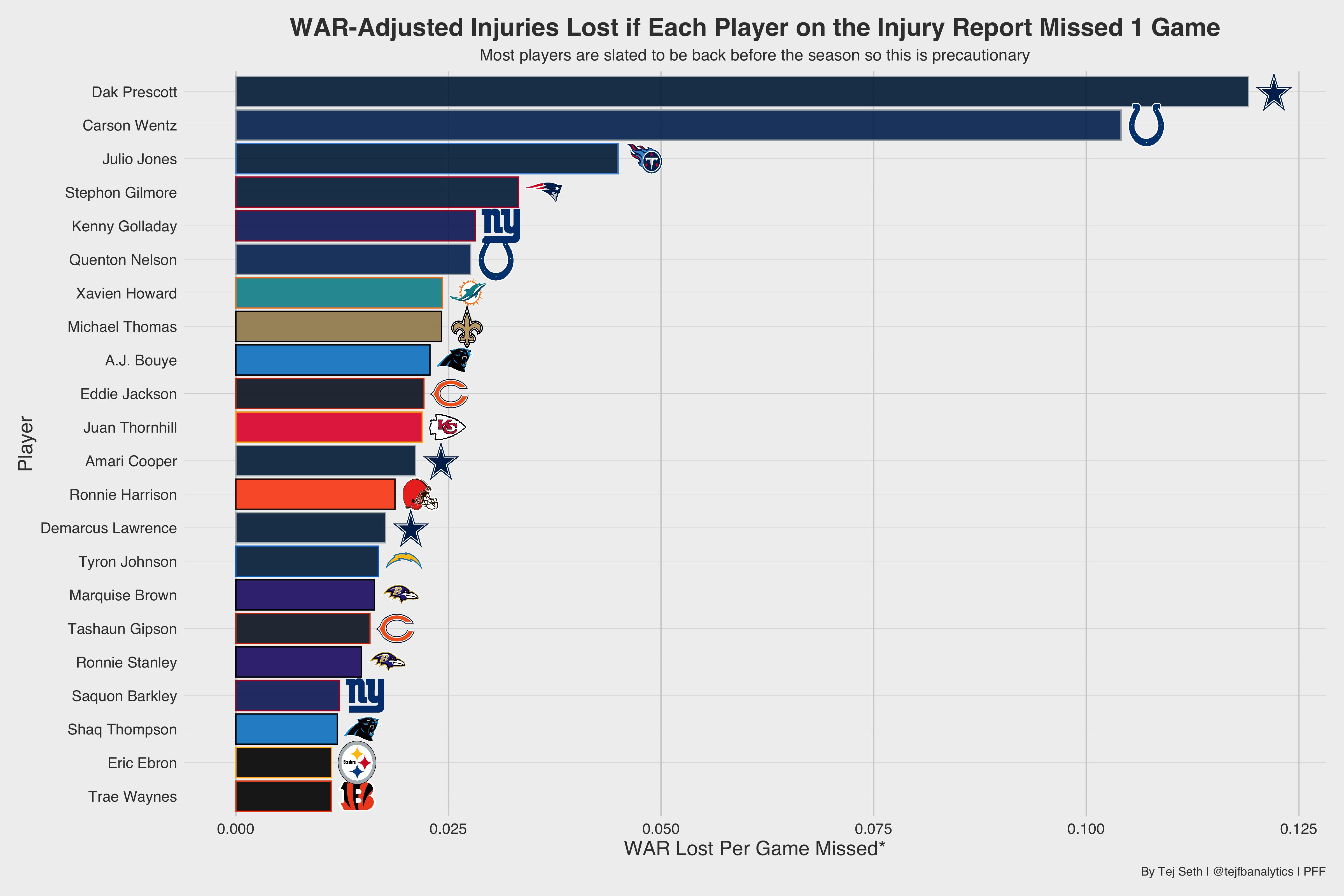 JUMP TO A SECTION:

T Teven Jenkins: Second-round offensive tackle Teven Jenkins will remain sidelined for his fourth straight practice as he nurses a back injury. Head coach has said the goal for Jenkins is to get him ready for when the pads go on, which will be on Tuesday, Aug. 3. Source: BearsWire

S Tashaun Gipson: Veteran safety Tashaun Gipson injured his groin during warmups on Monday. He was held out for the remainder of practice and will likely remain sidelined as a precautionary measure until he is fully recovered. Source: CBSSports

OT Tyrell Crosby: Offensive tackle Tyrell Crosby is dealing with a Grade 1 hamstring injury and is expected to be out a few weeks. Source: LionsWire

LB Za’Darius Smith: Smith has been on the non-football injury list since training camp began with a back injury. General Manager Brian Gutekunst hinted that the injury isn’t serious and the Packers could expect Smith to make his camp debut in the near future. Source: CBSSports

LB Randy Ramsey:  Ramsey suffered a “significant” injury, according to head coach Matt LaFleur, and expects him to be out for the foreseeable future. Source: PackersWire

ED Rashan Gary: Edge rusher Rashan Gary was not at practice Monday as he recovers from a groin injury. Source:  Matt Schneidman

WR Juwann Winfree: Wide receiver Juwann Winfree was not at practice Monday as he works his way back from a shoulder injury. Source:  Matt Schneidman

OT Kaleb McGary: Offensive tackle Kaleb McGary was put on the PUP list on Thursday, July 29 with an undisclosed injury. Despite missing the first week of training camp, head coach Arthur Smith said his return could be “sooner rather than later.” Source: Scott Bair

OT Matt Gono: Undrafted offensive tackle Matt Gono was placed on the PUP list on Friday with an undisclosed injury. Smith does not expect him to return before training camp ends. Source: Scott Bair

CB A.J. Bouye: Former Denver Bronco A.J. Bouye will be out a couple of weeks with a soft tissue injury, according to coach Rhule. Bouye went down in one-on-one drills Monday and received immediate attention from the Panthers athletic training staff. Source: Alaina Getzenberg

WR Keith Kirkwood: Wide receiver Keith Kirkwood suffered a concussion in Tuesday's practice but returned to Panthers training camp in the afternoon. Kirkwood was carted off the field after taking a hit to the head from JT Ibe.  Source: Darin Gantt

WR Michael Thomas: Wide receiver Michael Thomas will be out until the regular season as he underwent surgery back in June to repair a ligament in his ankle and is expected to miss four months. Source: Ian Rapoport

K Wil Lutz: Kicker Wil Lutz is dealing with a core muscle injury and will likely undergo surgery sometime this week. He is expected to out 8-12 weeks. Source: Ian Rapoport

QB Dak Prescott: Prescott suffered a latissimus strain in his throwing shoulder on Wednesday, July 28 and will not play in the Hall of Fame game Thursday. Prescott missed two days of practice last week but isn’t concerned about his shoulder and said he would practice and play if the injury happened during the regular season. Source: Todd Archer

WR Amari Cooper: Cooper underwent ankle surgery this offseason and is not expected to suit up for the Hall of Fame Game on Thursday against the Steelers. Head Coach Mike McCarthy said he “looks great” in his recovery process. Source: Mike Fisher

WR Kenny Golladay: Golladay was forced out of Tuesday’s practice with a hamstring injury and is expected to be out 2-3 weeks. Source: Pat Leonard

RB Saquon Barkley: Former first-round pick Saquon Barkley is set to return from the PUP list this week, according to Paul Schwartz. The Giants aren't planning on rushing Barkley back and will start him off with individual drills before giving him a larger workload. Source: Paul Schwartz

OG Shane Lemieux: Offensive guard Shane Lemieux was carted off the field Saturday after suffering a knee injury. Lemieux is expected to be out a couple of weeks but will not require surgery. Source: Ian Rapoport

RB James Conner: Former Steelers running back James Conner is currently dealing with a toe injury and did not participate in 7-on-7s or 11-on-11s this past weekend. Source: CBSSports

S Shawn Williams: Safety Shawn Williams was placed on the Non-Football Injury list with an undisclosed injury and is expected to be sidelined for a couple of weeks. There is no timetable for his return. Source: Darren Urban

WR AJ Green: Wide receiver AJ Green will be sidelined till at least early next week with an undisclosed injury, according to head coach Kliff Kingsbury. While the third-year coach did call the injury a “minor thing,” the timetable for his return suggests this could be more serious than Kingsbury is letting on. Source: Darren Urban

TE MyCole Pruitt: Tight end MyCole Pruitt is out with a calf injury and is expected to miss some time, according to head coach Kyle Shanahan. Source: CBSSports

WR D’Wayne Eskridge: Second-round pick D’Wayne Eskridge is still dealing with a toe injury he suffered this offseason and the team put him on the PUP list at the beginning of training camp. Eskridge has resumed running but head coach Pete Carroll did not provide a timetable for his return. Source: CBSSports

RB Travis Homer: Running back Travis Homer remains held out of training camp due to a calf injury that also made him miss time during June minicamps. Source: CBSSports

WR Marquise Brown: Wide receiver Marquise Brown’s hamstring injury is “worse than what they told me it was going to be” reports head coach John Harbaugh, as the third-year wide receiver missed his third straight practice Monday. Harbaugh failed to give any indication when Brown might return, saying “he’s out until he’s back.” Source: Baltimore Ravens

WR Rashod Bateman: Coach Harbaugh expects wide receiver Rashod Bateman to miss “a number of weeks” after suffering a non-contact injury in Tuesday's practice.  Bateman was seen grabbing his upper leg as he walked to the Ravens facility with a limp. Source: Adam Schefter

TE Nick Boyle: Tight end Nick Boyle continues to work his way back from a knee injury from November 15 that ended his 2020 season. He was placed on the PUP list at the beginning of training camp, with no set date for his return. Source: Baltimore Ravens

CB Jimmy Smith: Cornerback Jimmy Smith suffered a low ankle sprain in Friday's practice but isn't expected to be out long. Smith was carted off the field after getting tangled up with Mark Andrews in team drills. Source: Jeff Zrebiec

S Ronnie Harrison: Safety Ronnie Harrison will be absent from practice an “undisclosed amount of time” according to head coach Kevin Stefanski as the fourth-year player works his way back from a hamstring injury suffered at last Friday’s practice. Source: Cleveland Browns

RB Benny Snell Jr.: Running back Benny Snell was not present at Monday’s practice, and is “having something looked at” according to head coach Mike Tomlin. The severity of Snell’s injury is still being determined. Source: Pittsburgh Steelers

OT Marcus Cannon: Offensive tackle Marcus Cannon was placed on the PUP list to start training camp as he recovers from offseason knee surgery as well as a calf injury. He is “making progress” according to head coach David Culley, and should be ready for the start of the season. Source: Houston Texans

EDGE Kwity Paye: First round pick Kwity Paye suffered an ankle injury in Wednesday's practice. Reich didn't know the severity of the injury but called it a “little ankle sprain.” Source: Around The NFL

DT Taven Bryan: Defensive tackle Taven Bryan was involved in a “off the field accident” over the offseason according to head coach Urban Meyer, and was placed on the NFI list on July 28. His return is expected soon. Source: Jacksonville Jaguars

WR Julio Jones: Wide receiver Julio Jones exited Monday’s practice after coming down awkwardly on his ankle. Head coach Mike Vrabel said the team will “see where he is at tomorrow and see how he looks.” The injury is not believed to be severe. Source: Tennessee Titans

EDGE Derick Roberson: Edge rusher Derick Roberson left Saturday’s practice with an apparent injury and has yet to return. The severity of the injury is unknown. Source: Paul Kuharsky

TE Jacob Hollister: Tight end Jacob Hollister continues to be sidelined with a back injury that has kept him out of training camp since July 29. There is no timetable for his return. Source: Sal Capaccio

CB Xavien Howard: Cornerback Xavien Howard had a “little setback” in his recovery from an ankle injury as he continues to work his way back onto the field, according to head coach Brian Flores. Source: Miami Dolphins

WR Preston Williams: Wide receiver Preston Williams begins his 2021 season on the PUP list with a foot injury after missing the final eight games of his 2020 campaign. Source: Miami Dolphins

S Ashtyn Davis: Safety Ashtyn Davis has been placed on the PUP list with a foot injury and will be held out until at least week two, according to head coach Robert Saleh. Source: New York Jets

OT Cameron Clark: Offensive tackle Cameron Clark suffered a neck injury in Tuesday's practice and was taken off the field on a spine board. Clark was taken away in an ambulance with no further details available at this time. Source: Ethan Greenberg

DT Mike Purcell: Defensive tackle Mike Purcell will be out at least a week with an ankle injury he suffered late last week. Source: 92.5FM

LB Ben Niemann: Linebacker Ben Niemann has yet to return from a hamstring injury that knocked him out of Saturday’s practice. His status going forward is still unclear. Source: Matt McMullen

TE Nick Keizer: Tight end Nick Keizer has yet to return from a back injury sustained late last week. There is no indication when he may return. Source: Matt McMullen