No one knows exactly how the remainder of the offseason is going to play out.

At this time last year, the San Francisco 49ers were fresh off trading three first-round picks and a third-round selection to move up to No. 3 overall for North Dakota State quarterback Trey Lance. He went on to start just two games as a rookie while Jimmy Garoppolo led the team back to another NFC Championship game.

Draft capital and talent don’t always equate to rookie year success, making it an interesting exercise to project the 2022 Offensive and Defensive Rookies of the Year. Situation is nearly as important as raw talent when trying to predict who will win awards that rely heavily on production and “counting stats”.

Here is an early attempt at ranking the top-five candidates for Rookie of the Year on both sides of the ball, accompanied by their current Draftkings odds to take home the award.

Offensive Rookie of the Year candidates

When it comes to opportunity, no rookie is better situated than London. Over the last year, the Falcons have lost Julio Jones and Russell Gage with Calvin Ridley now suspended indefinitely by the NFL. Atlanta's wide receiver depth chart was ripe for a rookie, such as London, to step in as WR1 and share a significant chunk of the targets with 2021 first-round pick Kyle Pitts.

In this case, opportunity meets talent. The first thing that everyone goes to with London is his ball-winning ability — and for good reason. London led all FBS wide receivers in contested catches (17) despite playing in just eight games in 2021.

That success in contested situations doesn’t mean that London is a one-trick pony, though. He also ranked among the top five wide receivers in the draft class in missed tackles forced after the catch and drew a Michael Thomas comp in PFF's draft guide because of his ability to create separation underneath.

The biggest barrier for London winning OROY might be how good Atlanta’s offense is with Marcus Mariota at quarterback and a relative lack of talent around him on offense.

The Jets haven’t messed around when it comes to adding talent around 2021 first-round pick Zach Wilson. They have made significant investments to add three starting wide receivers, two starting guards, three tight ends who figure to have a role on offense and their top two running backs over the last two offseasons.

There isn’t anything that will keep Hall from taking on a lead-back role in their offense. He touched the ball more than any other running back in the country over the last two seasons (590 times) and ticked both the size (218 pounds) and athleticism (90th percentile and above finishes in the 40-yard dash and jumps) boxes that teams want to see at the position.

Hall isn’t going to step into a Najee Harris-esque rookie role with Michael Carter also in the picture, but it’s also easy to see him getting more valuable opportunities than Harris when comparing what the 2022 Jets offense could be to Pittsburgh’s offense last season. That hinges on Wilson taking a step forward in his second season out of BYU.

The Titans didn’t want to pay A.J. Brown top-of-the-market money, so they opted to replace him in the 2022 NFL Draft with another big, physical and athletic rookie wide receiver.

Burks’ 4.55-second 40-yard dash was one of the more disappointing times of the combine, but it's far from a disqualifier for a 225-pound wide receiver — particularly when Burks plays like this on his tape.

.@TreylonBurks is going to be a BIG problem in the NFLpic.twitter.com/X1k1gaQagB

In addition, 77% of his career college snaps came in the slot, meaning he’s largely untested as a traditional outside receiver. That’s especially true against press coverage. Burks had fewer than 50 career routes against press coverage on the outside, but he torched defenses in that small sample (7.0 yards per route run).

There’s a reason he came in at just 46th on PFF's big board. The tools are there for Burks to become a true No. 1 receiver in Brown's mold, but there’s a fair bit of projection to get to that point. The Titans will be putting a lot on Burks to produce early in his career with Robert Woods returning from injury and a lot of question marks at the wide receiver position.

Pickett has the best chance to start among the rookie quarterbacks as the only player at the position selected before the third round. He was also billed throughout the pre-draft process as one of the most “NFL-ready” quarterbacks, as he is fresh off a dominant 2021 season at Pitt. Pickett’s 92.2 PFF grade tied Bryce Young and C.J. Stroud for the best in college football, and he led all quarterbacks in this draft class in accurate pass rate on throws five-plus yards downfield.

However, Pickett isn’t a shoo-in to beat out Mitchell Trubisky for the starting job, and there is one major concern about how his game will translate to the NFL.

This highlights some of the concerns about Pickett breaking structure when he doesn't need to and holding on to the ball too long.

It's tough to produce at a high level in the NFL with that high of an average time to throw and a below average ADOT. pic.twitter.com/vfCWj1aEHR

Pickett bailed out of clean pockets too frequently in college. Perhaps that’s a product of less-than-ideal offensive lines early in his college career, and maybe it improves in the NFL. Nonetheless, the Steelers’ current offensive line isn’t exactly the model of stability.

That uncertainty keeps him at fourth place on this list, but there is reason to be excited about the young group of playmakers that the Steelers have started to collect on offense for Pickett. This offense, at the least, should be more exciting than it has been in recent years.

Olave is behind several other names — such as Garrett Wilson, Kenneth Walker III and Christian Watson — on the current Offensive Rookie of the Year odds, but the Saints’ confidence to move up to secure an additional first-round pick and move up to draft Olave ahead of Jameson Williams points to the idea that he’s going to have a major role in New Orleans’ offense. He’s an ideal No. 2 option next to Michael Thomas for Jameis Winston.

The Saints’ receiving corps was missing a lot of things last year, and a reliable downfield threat was near the top of the list. Olave is one of the better separators in the class on the intermediate and deep route trees. His 12 receiving touchdowns on throws 20-plus yards downfield over the last two seasons at Ohio State ranked fourth in the FBS. A few of those from Winston, who has no qualms about pushing the ball downfield, could push Olave into Rookie of the Year contention on a team that should be in the playoff conversation.

Defensive Rookie of the Year candidates

Thibodeaux is one of the most talented players in this draft class, will have little competition for a starting role in New York and steps into an attacking Don “Wink” Martindale defense that should put him in position to succeed. His first-place slot on this list is really as simple as that.

Thibodeaux earned a 77.9 PFF grade as a true freshman with Oregon in 2019 on nearly 500 defensive snaps, and his PFF grade only continued to rise in his next two years with the Ducks. He finished last season with an 83.2 overall grade and 91.5 grade in the pass-rushing department last season. Teams tried to gameplan around him, and he was still one of the most effective pass-rushers in college football.

The Giants needed a No. 1 edge rusher to pair with 2021 second-round pick Azeez Ojulari, and that’s what Thibodeaux projects as. It wouldn’t be surprising to see him put up the pressure and sack numbers that lead to Rookie of the Year awards.

Hutchinson is the current favorite to win Defensive Rookie of the Year, edging out Thibodeaux and Travon Walker. The reason he comes in just below Thibodeaux here is that the Lions have some more options to turn to on the edge than the Giants do, potentially limiting his opportunities to accumulate the stats that determine these kinds of awards.

There’s nothing to indicate Hutchinson won’t hit the ground running in the NFL, though. The 6-foot-7, 268-pound edge defender out of Michigan might not quite be the athlete that No. 1 overall pick Walker is, but he did earn 95th percentile or better finishes in the change-of-direction drills (shuttle and three-cone). And from a production standpoint, Hutchinson graded out just below the elite Myles Garrett–Nick Bosa–Chase Young tier over his college career.

Gardner is fighting an uphill battle in the awards race as a defensive back. It’s just harder for cornerbacks to put up the requisite numbers to receive votes unless they have a big season from an interception and passes defensed standpoint. Simply locking down their side of the field in coverage often isn’t enough with linebackers racking up tackles and edge rushers stacking sacks.

However, the 6-foot-3 cornerback out of Cincinnati steps into a situation in Robert Saleh’s defense where he could put up some of those ball production numbers. No cornerback in this class is as battle-tested as Gardner, who lined up in press alignments on nearly 80% of his defensive snaps in college.

% of career coverage snaps in press coverage, per @PFF charting:

Offenses playing against Cincinnati’s defense just avoided Gardner’s side of the field. One of the best quotes of the pre-draft process came from a coach speaking to Bruce Feldman about playing against Gardner: “I thought he was very good, but I didn’t know how good he was because nobody ever really went at him. We didn’t want to. We put a slapdick (receiver) over there the whole game and never looked at him.”

It’s going to be harder to do that in the NFL, meaning Gardner should get more opportunities to get his hands on the ball.

Unlike defensive backs, linebackers have plenty of opportunity to rack up the counting numbers that voters flock to. Walker will have to split those with 2021 All-Pro linebacker De’Vondre Campbell, but he should still have a significant role in what projects as one of the better defenses in the NFL on paper.

Walker checks all the measurable boxes that teams are looking for in an NFL linebacker. He’s 6-foot-4, 242 pounds with speed (4.52-second 40-yard dash) and change-of-direction ability (6.89-second three-cone). He’s also one of the best tacklers in the class — an area where recent rookie disappointments at the position have struggled. Walker’s combination of length, athleticism and a clean medical sheet is why he went two rounds higher than teammate Nakobe Dean despite not having close to the same production profile in his college career.

The opportunity will be there for him to make an impact on a defense that already has stars at all three levels. That should push him toward the top of the Defensive Rookie of the Year list.

Karlaftis is my favorite bet on the board at +1800 to win Defensive Player of the Year. The 266-pound edge defender out of Purdue dropped a massive 14 pressures in his true freshman debut against Nevada in 2019 and never looked back. He was a consistent pressure producer early in his college career and kept that pace throughout his three seasons at Purdue, as his green line on the chart below highlights. 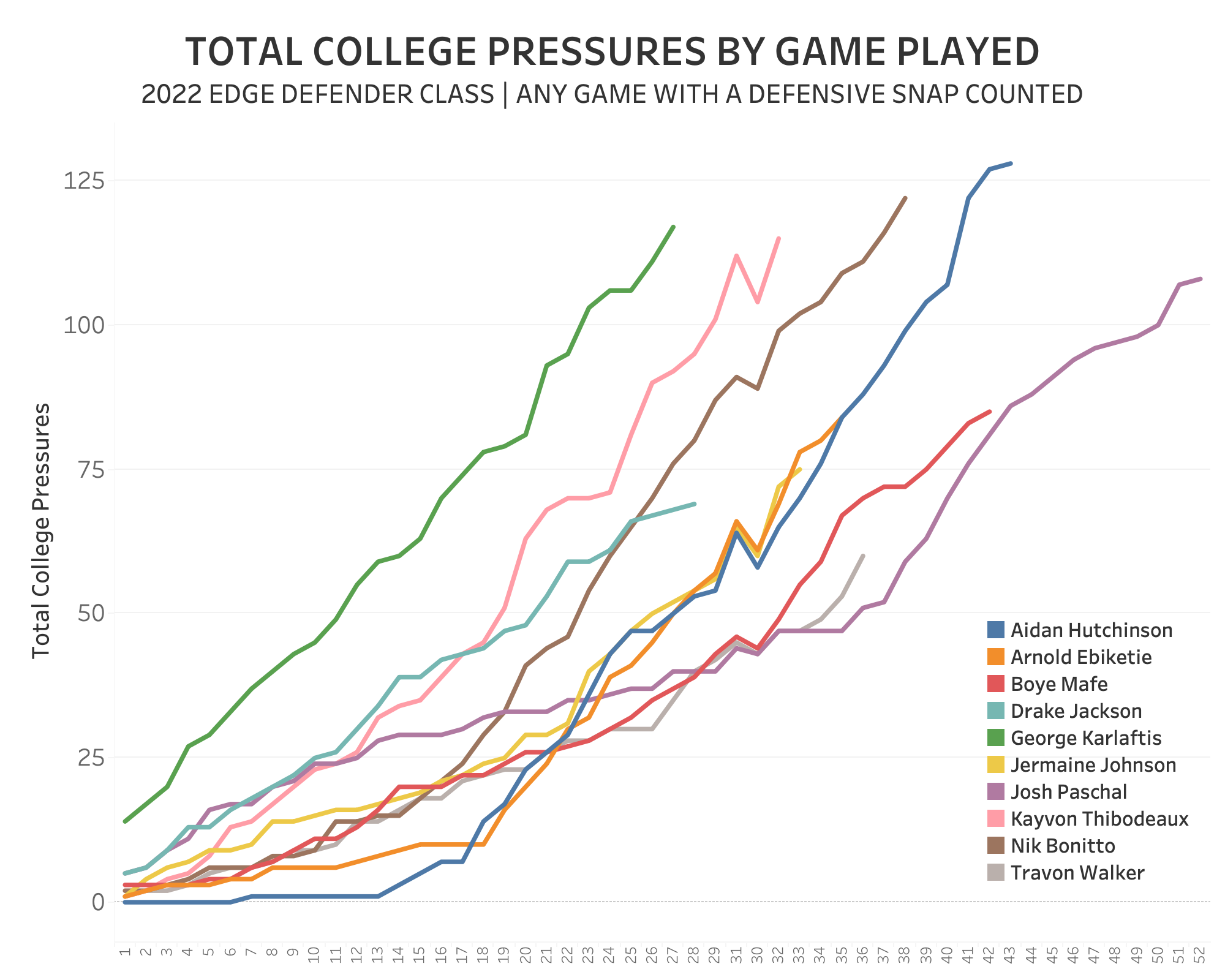 Karlaftis might not be the bendiest athlete in the class off the edge, but he’s certainly explosive and that shows in one of the best bull-rushes in the draft class. He joined a Chiefs defense that desperately needed edge help. Karlaftis should step into a starting role opposite Frank Clark, and he’ll be asked to contribute at a high level early in Steve Spagnuolo’s defense. It’s worth a bet that he answers that call.