The NFL's best teams in decision-making on second down

Now that each team has played three-quarters of their regular-season games, it’s time to take a look at one of the areas in which a team can either get an efficiency boost over their opponents or jettison value faster than Lamar Jackson can scamper out of the pocket for a first down: Second-down plays.

As with all of our analyses, the models are built with the aid of AWS.

Second downs at the middle child of football. First downs happen more frequently and have seen a great deal of innovation. The rate at which teams have passed the ball on first down has increased steadily from 46.9% in 2006 to 49.9% in 2019. The increase has been mostly monotonic, with blips occurring in 2017 and 2019, years with substantial injuries to starting quarterbacks. Third downs are “money downs,” and much like goalie play in hockey, they are very highly correlated with team success while being very unstable week-to-week and season-to-season. 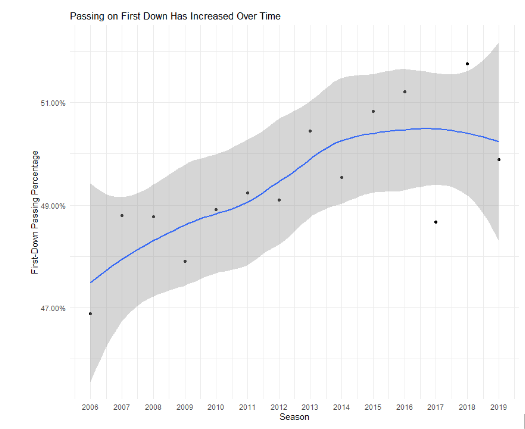 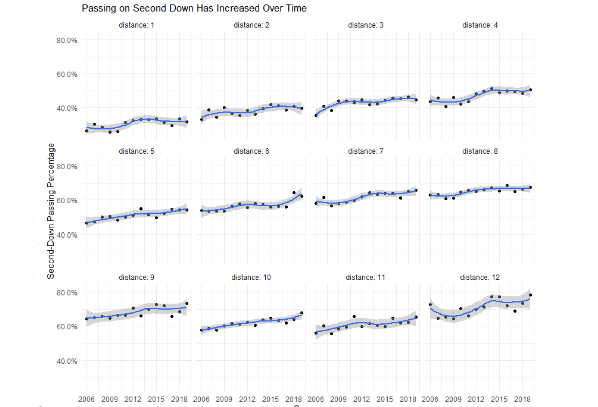 As with anything involving progress, those who are ahead of the curve will reap the benefits, while those who fail to adapt to will struggle. In this article, we point out three teams that are treating second down optimally.

We considered second downs and 12 or fewer yards to go, in games with two scores. The “correct” decision between a run and a pass was defined as the one with the higher expected points added. Below are the three best teams in terms of making decisions on second downs. 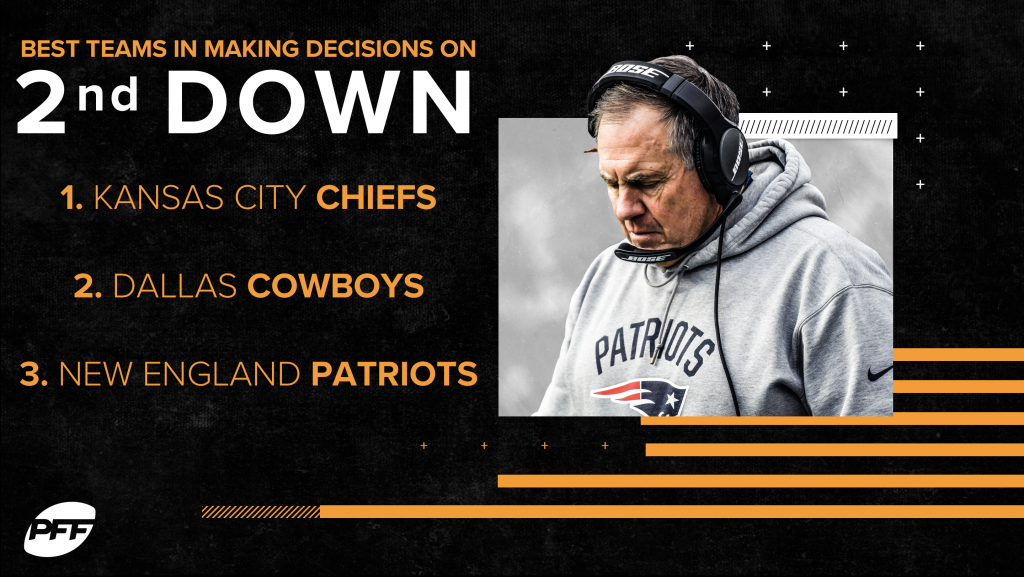 Andy Reid is a Hall of Fame coach and a leader in our play-by-play coaching metric in large part due to the decisions he makes on second down. Over 76% of his second-down decisions are the optimal one, with almost 47% of such plays yielding positive expected points added (seventh in the NFL). The Chiefs are running play-action on 23 % of their total offensive plays while running the ball on 33 % of plays. Their rate of 0.71 play-action passing plays per run play is best in the NFL by 0.14. In a league where deception is increasingly important, Andy Reid remains ahead of the curve even in a season where his MVP quarterback has both been injured and seen his play regress (if only slightly).

The sky is falling in Jerry World but there are a lot of reasons for optimism despite the record. For one, they play in the NFC Least, so things are still likely to work out for the Cowboys. Secondly, Dak Prescott and the offense has been quite impressive — Dak has a top-five raw PFF grade per snap while the Cowboys' offense ranks seconds behind only the Ravens in expected points added per play on first and second down. A huge reason for that is their willingness to let Dak throw on second-and-long, saving Tony Pollard and the run game for situations where their average gain is actually going to improve their chances of scoring instead of saddling them with an obvious pass situation on third down. On second-and-eight-plus, when the score is within 10 points, the Cowboys have thrown the ball at the second-highest rate and are averaging a league-best 7.2 yards per play on those plays.

Speaking of the sky falling, New England is the worst 10-2 team ever in the history of the last four months. Fear not, there is some reason for optimism in Boston aside from the new state of the art TB12 facility. The Patriots are making smart decisions that might not be winning them any faith right now but will surely contribute to the miraculous resurrection from the dead when the playoffs arrive. Among those are their second-and-long decisions — they are throwing more often than any team on these plays when the score is within 10 points, while they're also running on a league-high 81% of second-and-four-or-less plays his season. The execution has not yet been there, but a few more avocados for the rookie wide receivers should have everyone on the same page by the time the tournament rolls around.