The Titans are surging, but are they real Super Bowl contenders without Derrick Henry and Julio Jones?

Tennessee Titans running back Derrick Henry (22) runs for a 76-yard touch down against the Bills at Nissan Stadium Monday, Oct. 18, 2021 in Nashville, Tenn. Titans Bills 097

When it was announced that star running back Derrick Henry would potentially be out for the season with a foot injury, it seemed like a major blow to the Tennessee Titans‘ Super Bowl hopes. One of the few running backs that matters, Henry was on pace for another 2,000-yard season before he was sidelined.

But despite not having the 2015 Heisman winner in the lineup, the Titans took care of business against the Los Angeles Rams and New Orleans Saints. In fact, they are riding a six-game winning streak, including five straight victories against teams above .500.

Now, per PFF’s power rankings tool, the Titans currently have the easiest schedule for the rest of the season. PFF's power rankings believe Tennessee will easily win the AFC South, and the team is projected to be the No. 1 seed heading into the playoffs.

Despite all of this, there are some trends that the Titans have shown over the season that make them tough to pencil in as a real Super Bowl contender.

Let’s start with the defense. Two weeks ago, the Titans put up an outstanding performance versus the red-hot Rams. Matthew Stafford was the MVP favorite heading into that game but was pummeled by the Tennessee defense. It was easily his worst outing of the year, recording -0.29 expected points added (EPA) per play, including two bad interceptions in his own territory — one of which Kevin Byard returned for a touchdown.

Watching that game, it seemed like the Titans generated a ton of pressure, especially up the middle. Jeffery Simmons has developed into one of the best defensive tackles in the NFL. He leads all interior defensive linemen in pressures created (46) and also ranks first in pressures on true pass sets.

The Titans as a whole are second in the league in pressures but actually slot into 24th in pressure rate. Since they play from ahead most of the time, they find that the opposition throws against them more often than not. 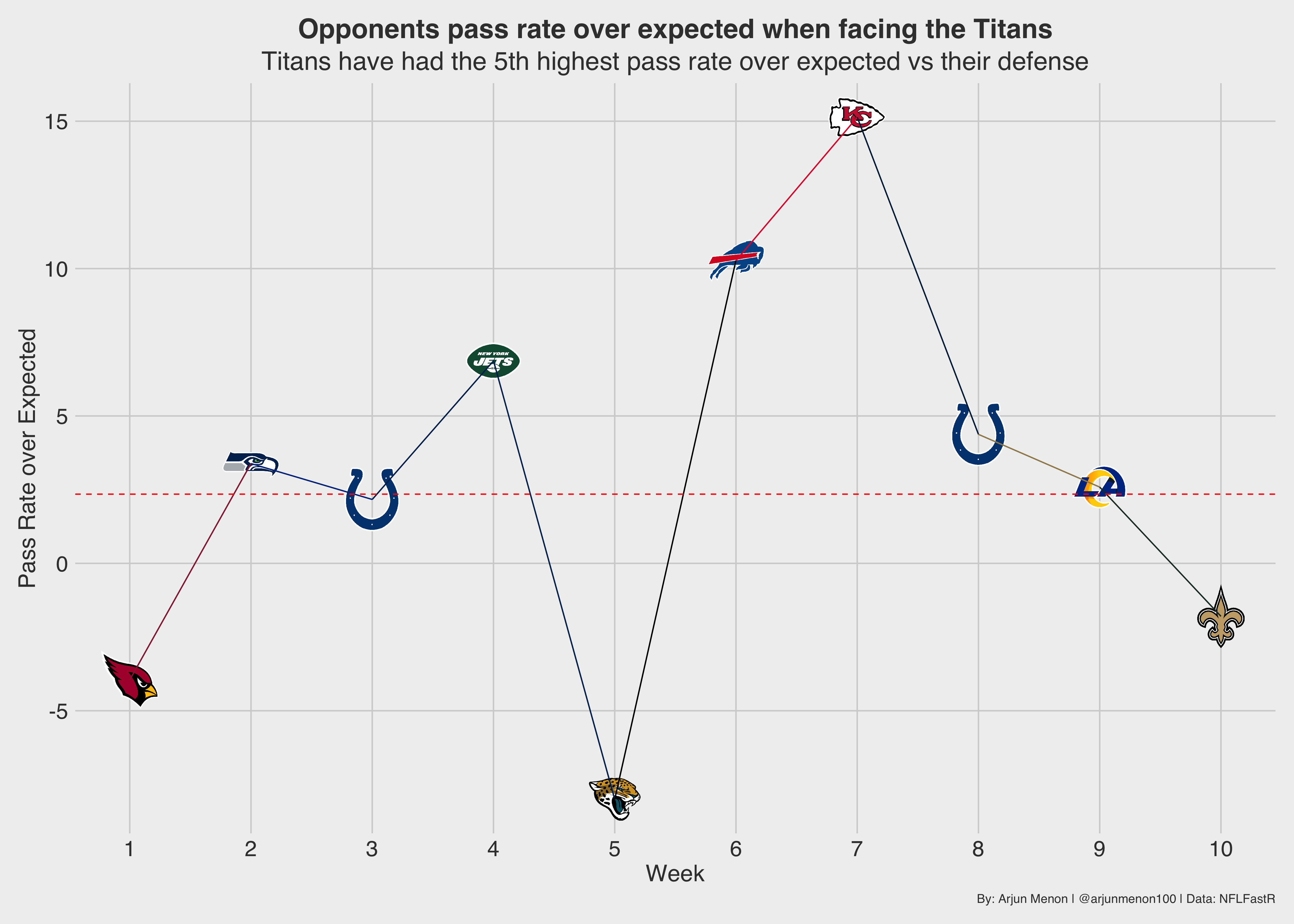 In four of Tennessee's 10 games this season, opponents have thrown at an above-average rate. Heading into the 2021 campaign, the Titans' secondary was a big question mark due to Adoree' Jackson and Malcolm Butler departing and Kenny Vaccaro getting cut. Interestingly enough, they currently sport the second-highest team coverage grade (84.2). This is despite their depth being tested, especially in Week 6 against the Buffalo Bills where they were down to their third-string corner by the end of the game.

The Titans currently rank second in pressures forced (210), but they rank just 24th with a 31.3% pressure rate. This goes along with the graphic above. They force a lot of pressure because teams throw on them more often, but they don’t force pressure at a high rate. When looking at their 30th-ranked pass-rush grade as a team, this makes sense. Tennessee signed Bud Dupree in the offseason, but he hasn’t lived up to the $16.5 million average-per-year salary he’s getting.

Defensive coordinator Shane Bowen seems to have recognized this trend and has changed his scheme to try and generate pressure more often. 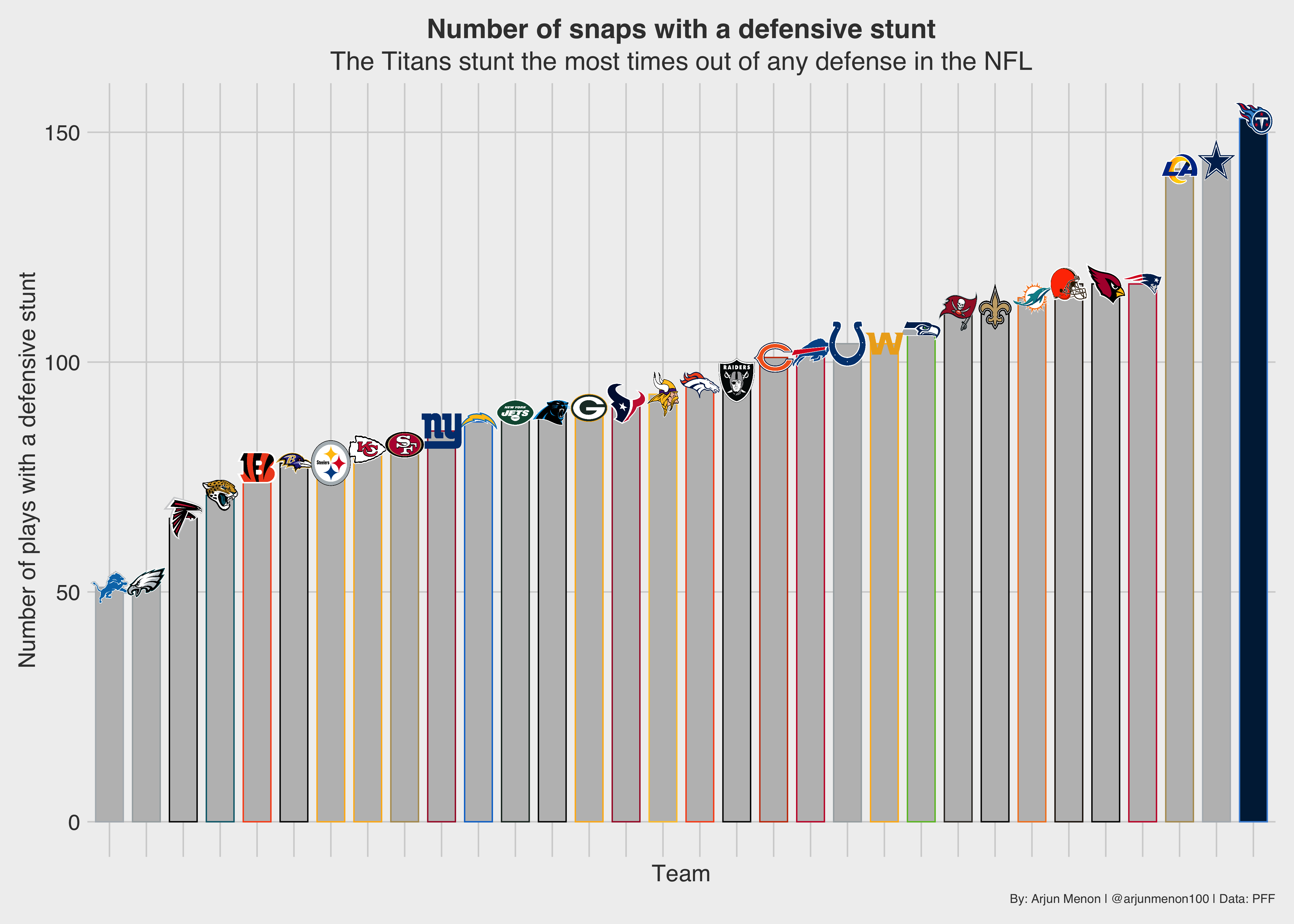