What makes Steve Spagnuolo’s dime Package work so well in the playoffs?

In the conversations surrounding modern defensive play, the best orators in the coaching community sound like cable TV telemarketers, promising that they have a package with the one missing piece to complete what you already have.

Schemes are centered around the idea of being “plus-one” somewhere, whether it be in the box, on the perimeter or against the pass protection. And where there isn’t a numbers advantage, the defense relies on having better players than the offense.

Kansas City Chiefs defensive coordinator Steve Spagnuolo is one of the best in the sport, and he will be looking for his third championship on Sunday against the Tampa Bay Buccaneers. His defense is predicated on creating those numbers advantages where needed, as all the best defenses in football are, but “Spags” has found his success by leaning into his personnel's strengths to execute his attacking defense.

The NFL has adopted nickel personnel (five defensive backs) as the new base, as teams are using it for almost all of their standard defensive calls in order to match the league's offensive shift toward 11 personnel (one back, one tight end, three wide receivers).

However, Kansas City makes a clear divergence in personnel usage, with its five-defensive-back packages receiving roughly the same share of snaps that other playoff teams have used for base defense. It's actually dime personnel (six defensive backs) that gets a plurality of the work for Spagnuolo’s defense, almost quadrupling the NFL average.

With unique personnel splits, Kansas City stands alone in its approach. This is partially necessitated by the lack of production up front — entering Super Bowl 55, defensive tackle Chris Jones is the only defensive lineman with an overall grade higher than 70.0.

The linebacker position has also been pitiful the last two postseasons, with Ben Niemann‘s 56.5 grade ranking first among Chiefs linebackers. So, the truth is that Spagnuolo couldn’t afford to play more base and nickel even if he wanted to, nor could he rely on the front four to generate pressure in passing situations. 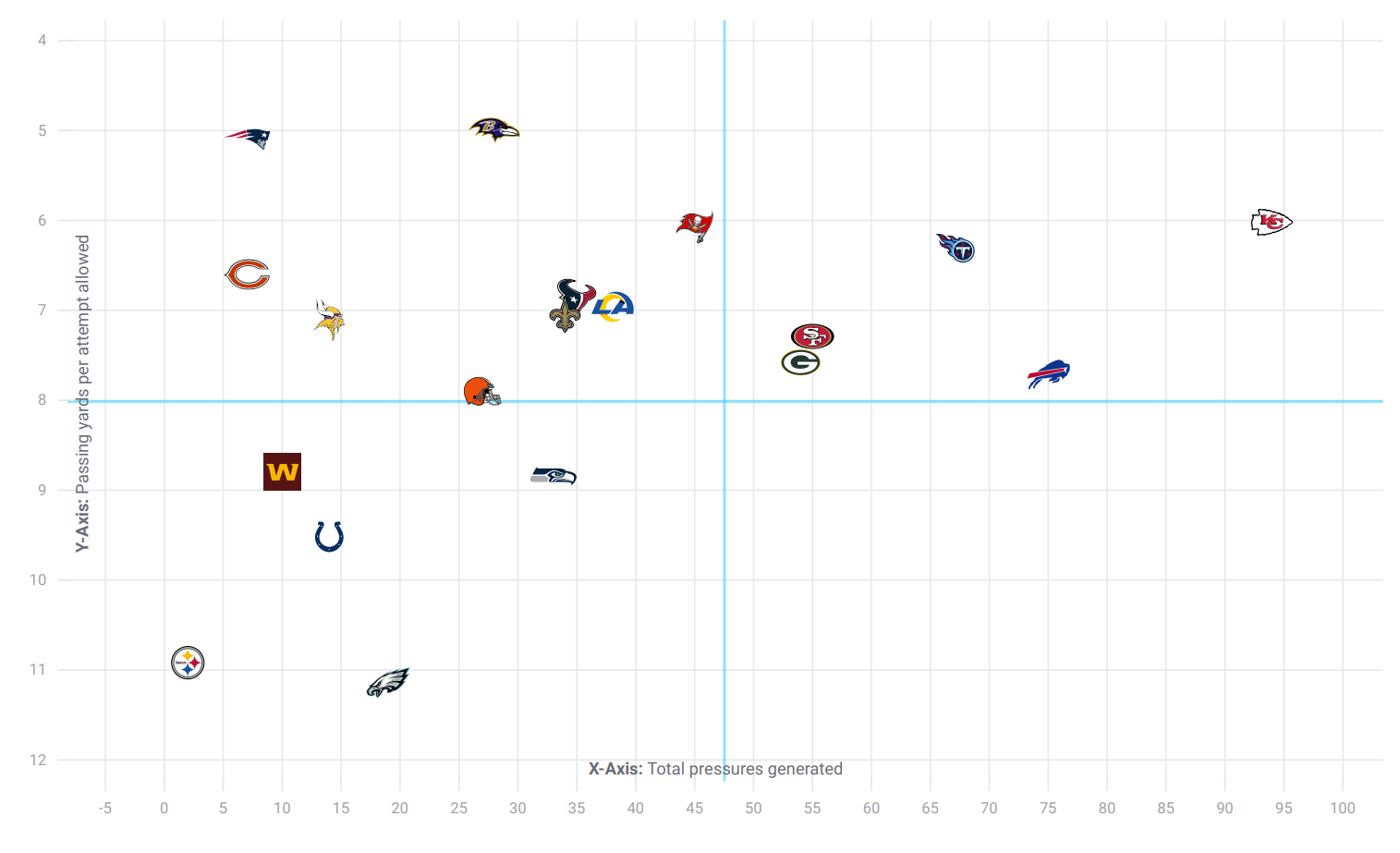 Despite the shortcomings near the line of scrimmage, few teams have been able to generate the kind of pressure the Chiefs have without it coming at the expense of covering passes downfield. Knowing that the pass rush isn’t coming from conventional spots on defense, the logic would lead one to think that the pressure is a product of xs and os filling the holes left by Jimmies and Joes.

The data supports that prior, as the Chiefs lead all teams over the past two postseasons in total pressures, unblocked pressures and sacks out of nickel and dime personnel.

With the majority of the Chiefs' pass-rush production coming from dime — 76% of total pressures, 57% of unblocked pressures and 76% of sacks — Spagnuolo has developed game plans with his sub-personnel that manufacture free runners at the quarterback, and his players have been able to convert that pressure into sacks.