An unnoticed roster transaction from last week was the one that saw the Tampa Bay Buccaneers claim placekicker Elliott Fry through waivers after his release from the Carolina Panthers last Thursday.

This is probably the most inconsequential move in a spectacular offseason for the Buccaneers. Still, it sparked the idea to write an article on how to handle a situation like the one we now see in Tampa, where the kicking game has been an issue for over five years now but the passing offense produces first downs at one of the highest rates in the league.

The Bucs' kicking issues since 2015 have been unprecedented

The main variable as to whether or not a field goal will be successful is, of course, the field-goal distance. So, we’ve used field goals from 2013 through 2018 to build a model that allows us to adjust for this variable, which enables us to compare individual success in the kicking game to what we would expect from “average” performance. Using both field-goal and extra-point attempts, four of the Buccaneers’ five seasons since 2015 rank below the 10th percentile, and the best season (2019) ranks at the 18th percentile. 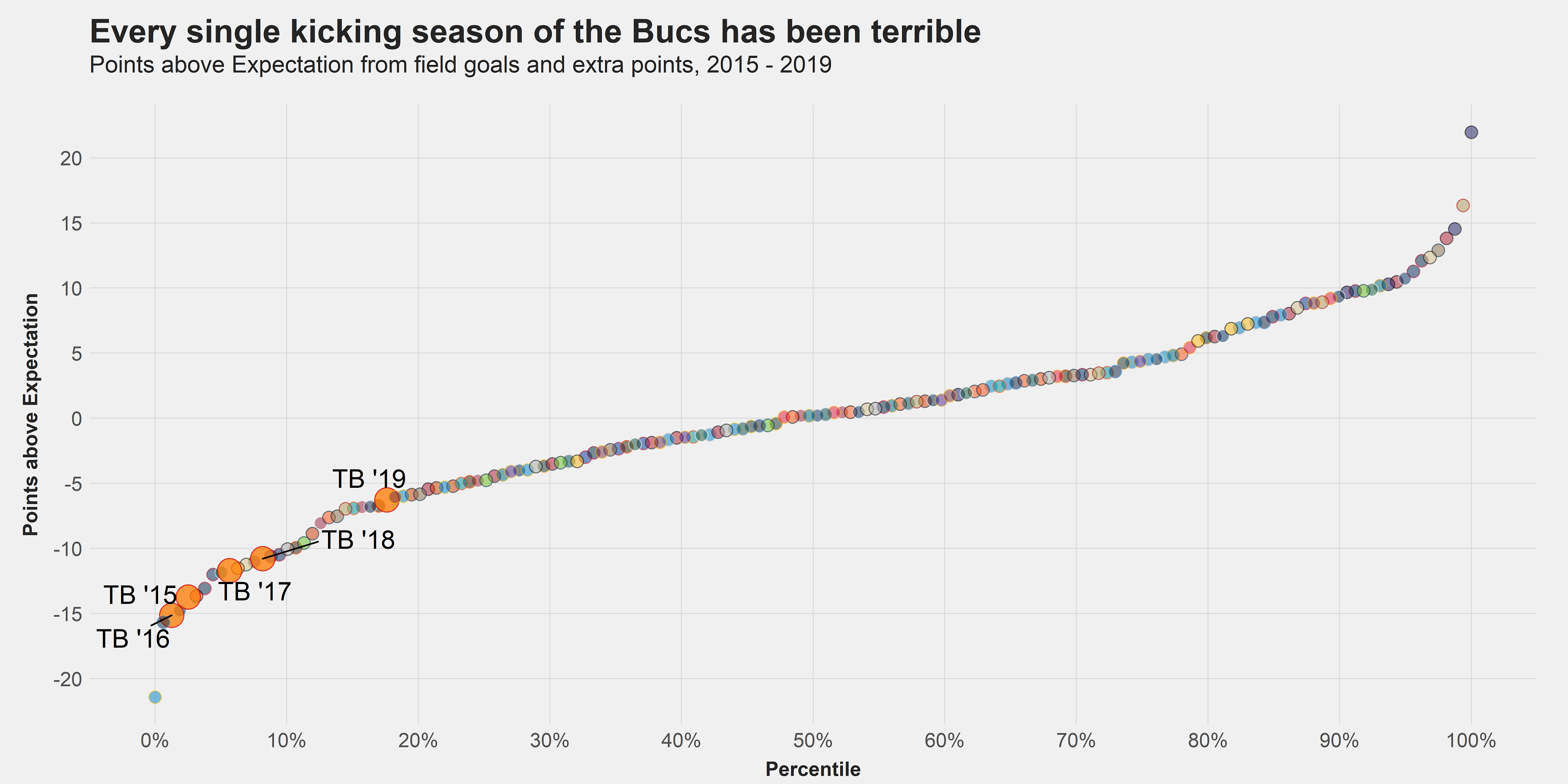 That’s downright horrible, and no other team has come close to suffering those kinds of kicking woes, as 30 teams had at least one above-average season over the last five years. The only team with comparable issues — the Los Angeles Chargers —  had one average-ish season in 2015, and four of their five seasons were better than the Bucs’ best season.

Landing below the 20th percentile five times in a row would happen 0.3% of the time if kicking field goals wasn’t a skill. So naturally, being that bad over a long time translates to being a negative outlier when looking at cumulative results since 2015. 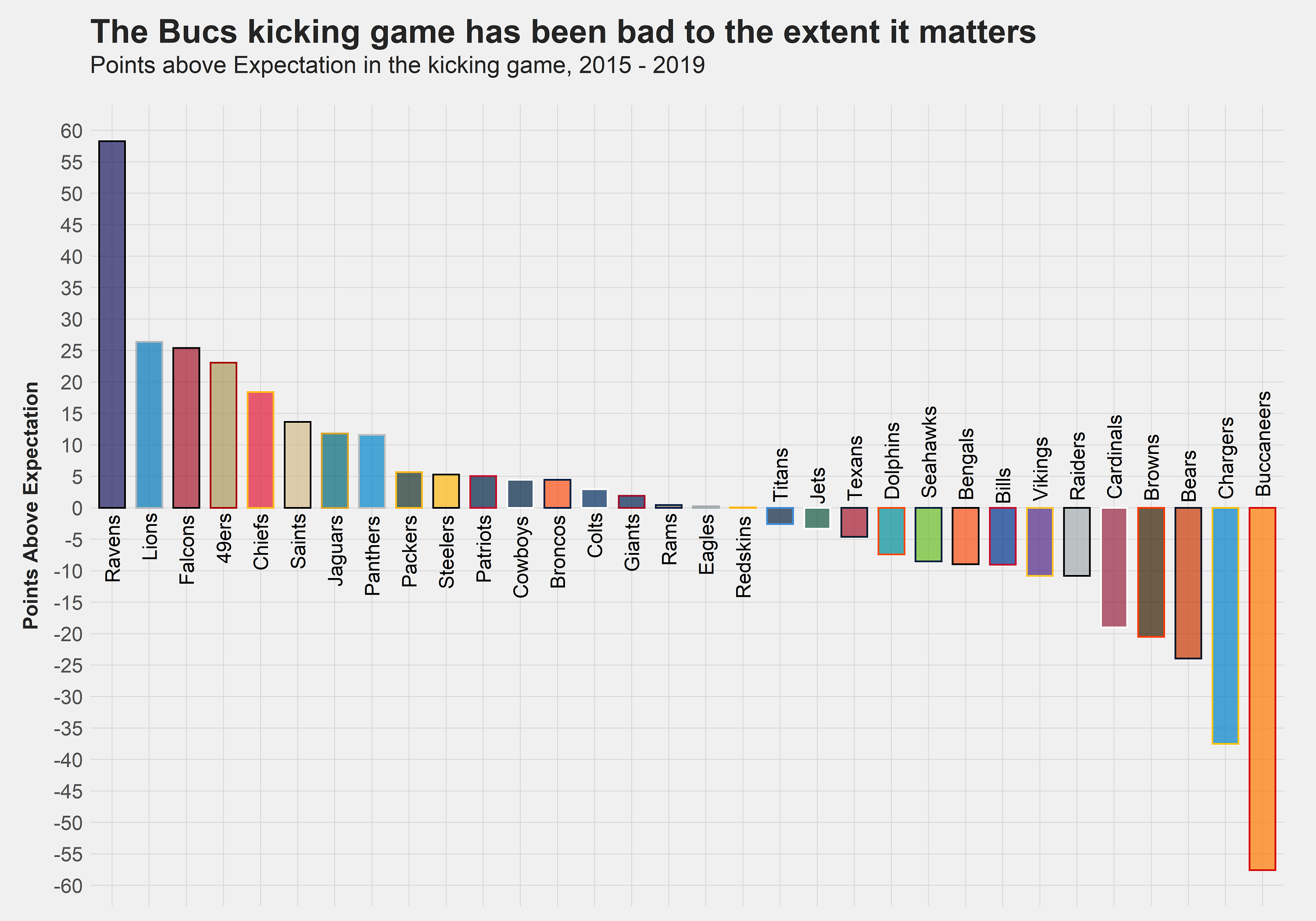 The kicking game hardly matters from a roster-building standpoint because, while kicking a football between the uprights is undoubtedly a skill, we (including NFL teams) are notoriously bad at identifying those players who are consistently good at it. This is mostly because the roughly 30 field goals per season — many of which come from under 40 yards and should be chip shots — simply isn’t enough for us to gather a meaningful sample. Additionally, even an above-average kicker has a fairly large chance of having one bad season.

However, kicking can matter from an explanatory standpoint, as one kick at the end of a game can be the difference between a win and a loss, and thus can be the deciding factor in a playoff berth or even a championship.

All things considered in hindsight, it doesn’t matter enough to move the needle significantly. Twenty-nine NFL teams were within three-quarters of a win from league average over the course of the last five seasons, and half of the league’s teams were within half a win from each other over that same time frame. That’s one-tenth of a win per season.

The Buccaneers’ kicking issue, however, has gotten so bad that you could actually say that it does matter. Their almost 60 points below expectation translate to roughly 0.35 wins per season below average. As a comparison, Aaron Donald averaged 0.32 wins above average per season during the same time frame.

The obvious solution is to stop kicking field goals

Given those rough outings, it seems natural to bring in another kicker like Elliott Fry, who hasn’t much experience at the pros but flashed in the AAF when he made all of his 14 field-goal attempts and went into AAF history as one of the best kickers ever. And sure, Fry — who also made three of his four field-goal attempts in last year’s preseason with the Chicago Bears — deserves a fair shot at earning the starting job, but the kicker position is not what the Tampa Bay Buccaneers should be focusing on to fix their kicking problem.

Instead of worrying about making their kicks, the Buccaneers should first worry about whether attempting a field goal is a good idea to begin with.