The 2021 regular season is in the books, and now it’s time to look back at what happened. Some people tire quickly of “value” debates, mainly because the most valuable position in football is in a class apart from others. To solve that problem, I’m restricting this analysis to all positions but the quarterback while still using a universal value metric that we can apply across positions.

I developed the PFF Plus-Minus metric a couple of years ago, starting with the puzzle of putting a point value on the production of wide receivers in their primary role as pass-catchers. I detailed the methodology in the analysis and went on to apply that same methodology to the pass-blocking value of offensive tackles and the rushing value of running backs.

This analysis uses the same methodology for valuing positions on the basis of a single role, or facet as we call it, on their position but expanded it to all non-quarterback positions and to all of the four facets of non-quarterback offensive play we track: rushing, receiving, pass blocking and run blocking.

Using participation data and on- and off-the-field splits has a rich history in other sports for building player valuation metrics. No matter how much we try, the human eye and brain cannot notice the contribution of every player on every play while calculating the exact impact of those actions on the game in a comparable metric. By studying the differences in team success when a player is on and off the field, we can capture the entire effect in useful numbers for comparison.

The issue with using on-off splits in football is that the time for all players on the field is limited in a 17-game season, and the substitution patterns for different positions don’t allow for much comparison. Without injury, offensive linemen typically play every snap of the game, whereas running backs are often rotated in some manner. The solution I came up with to this problem was to look at the on-off splits of groups of similar players, rather than individual players.

I used the PFF grading data, along with other traditional and advanced stats, to cluster similar players for each position in each facet of the game, and then compiled the on-off splits of those groups. In doing so, we increase the total samples of measurement and reduce the noise of single-player numbers.

Before we get into the results of the analysis for every non-quarterback offensive position, let’s walk through a specific example of how clustering works, using the rushing facet for running backs. 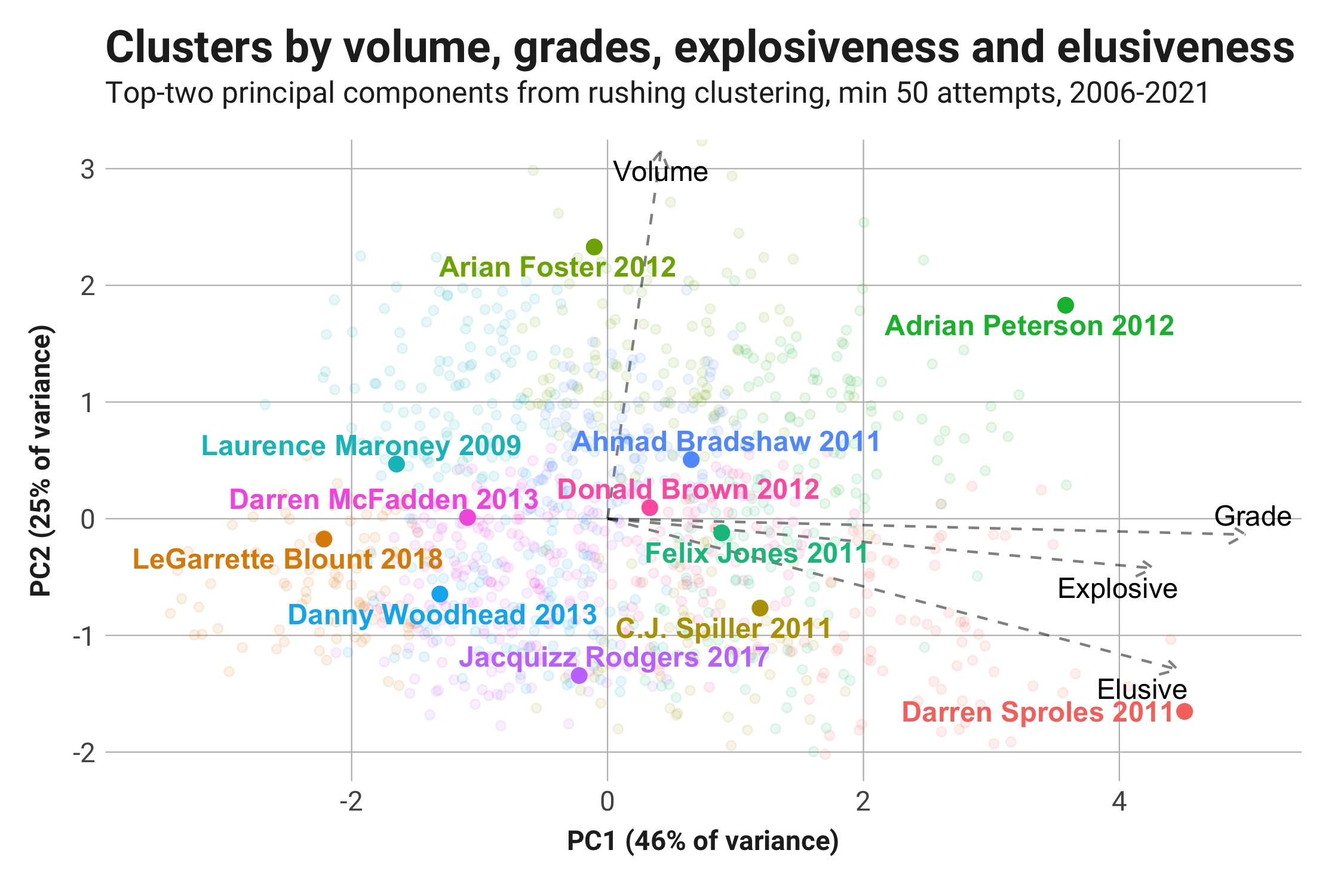 Without getting bogged down in the details, the graph above divides all running back seasons from 2006 to 2021 with at least 50 attempts into 12 different, color-coded clusters. The metrics used to group the clusters include rushing attempts per game, PFF rushing grade, rate of explosive runs and rate of forced missed tackles.

You’ll recognize at least some of the names above and the seasons highlighted, one representative from each cluster. You have a range from the high-volume and lower-explosion Arian Foster to the missed tackle machine Darren Sproles. Some running backs, such as Adrian Peterson in his MVP 2012 season, combined the best attributes of volume, explosiveness and elusiveness.