• Daboll-era off the fast start: The New York Giants‘ 5-1 start is thanks to head coach Brain Daboll and the rest of the coaching staff's ability to tailor the scheme to their roster.

• Giants offense leaning on its strengths: New York has been using a ton of play-action passes in addition to consistently moving the pocket to take advantage of Daniel Jones‘ strengths.

• Same ol' Wink: Giants defensive coordinator Don “Wink” Martindale continues to be one of the most aggressive defensive playcallers in the NFL, and that aggressiveness has enabled New York's defense to hide its weaknesses in the secondary while amplifying its strengths in the front seven.

It is often brought up how crucial self-scouting is in the NFL, as it leads to self-awareness and can help teams know what they are and aren't.

There might not be a better example of this in the 2022 NFL season than the New York Giants. Despite having a roster that lacks talent at multiple key positions, the Giants coaching staff has done a great job of tailoring the game plan to the players on the roster, which is a key factor as to why the Giants have the NFL's second-best record at 5-1.

AN OFFENSE ON THE MOVE

There were question marks around the Giants offense at every position except for running back and left tackle. New York declined to exercise quarterback Daniel Jones’ fifth-year option, the projected trio of starting receivers Kenny Golladay, Sterling Shepard and Kadarius Toney has been unavailable for most of the season, the interior offensive line consists of journeymen and their rookie right tackle is going through some growing pains.

So how does this offense still rank 10th in the NFL in expected points added (EPA) per play? 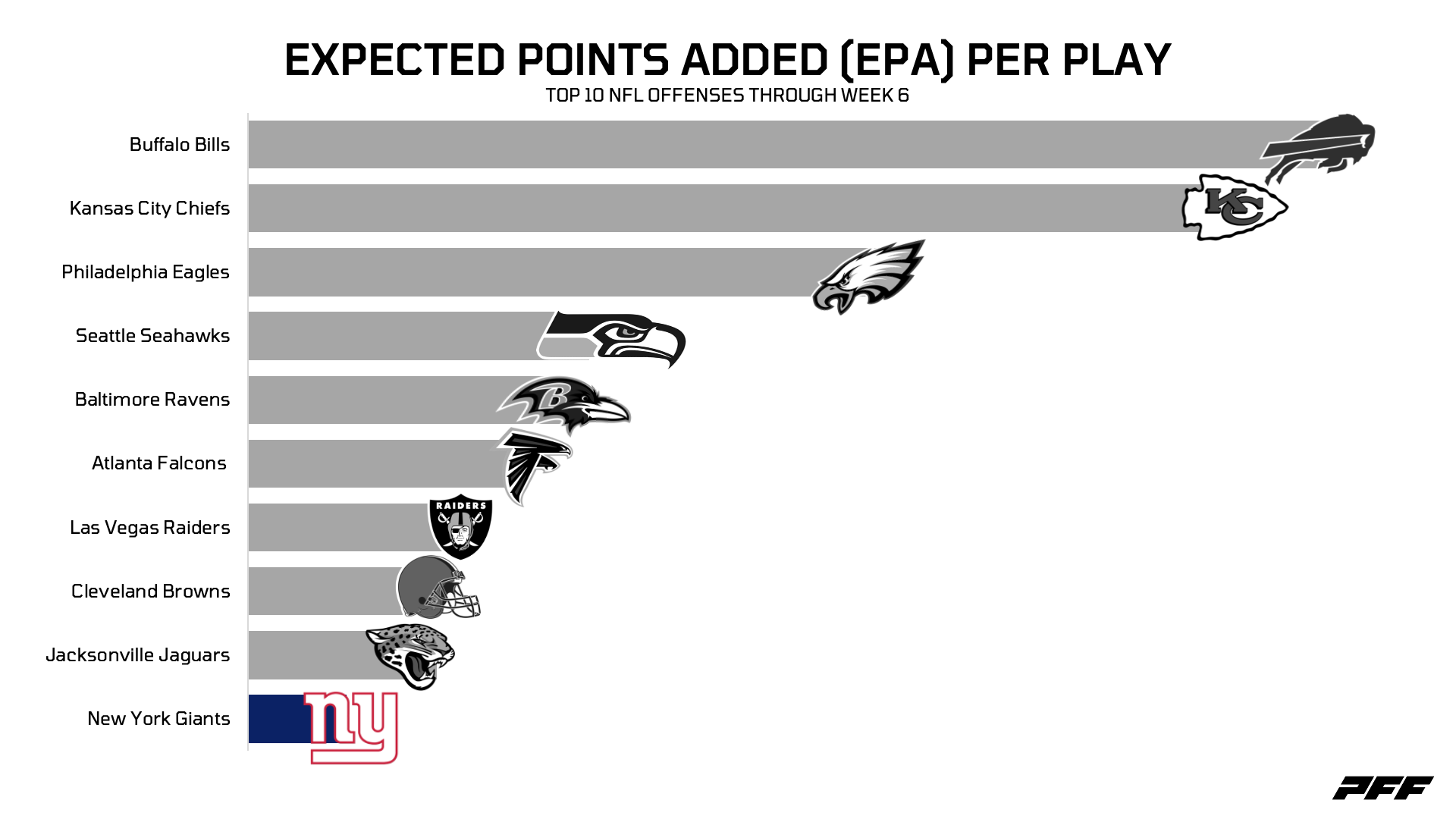 However, instead of trying to fit a square peg in a round hole by trying to emulate the top offenses in the NFL — the Buffalo Bills and Philadelphia Eagles have generated the most EPA per play on these dropbacks — the Giants have run the fourth-fewest such pass plays in the NFL, ahead of only the Atlanta Falcons, Tennessee Titans and Chicago Bears.

On the other hand, the Giants have found the areas where they excel and decided to lean into those schematic choices instead. At 0.32 EPA per play, New York ranks fourth in the NFL on play-action passes, and the team is not afraid to take advantage, with Jones accumulating a league-leading 90 play-action dropbacks through Week 6.

Most play-action dropbacks through NFL Week 6

Similarly, if we look at plays with moving pockets (i.e. rollouts or rollouts resulting in scrambles), the Giants lead the NFL by a wide margin with a 0.54 EPA per play.

As a result, offensive coordinator Mike Kafka and head coach Brian Daboll did not hold back in asking Jones to be on the move, as the Giants are tied with the Pittsburgh Steelers for the most rollouts this season, with 38.

The Giants also relied heavily on Saquon Barkley against the Green Bay Packers last week. The Giants lead the NFL in plays with a running back behind center — a wildcat formation — with 12.

At this point, it might not come as a surprise that they lead the NFL in EPA per play on these plays among teams who have lined up that way at least twice this season.

The Giants lead the league in defensive back blitz percentage (23.6%) in addition to ranking second in Cover 0 and fifth Cover 1 usage.

And even with injuries plaguing his defense in the Week 5 game against Aaron Rodgers and the Green Bay Packers, Martindale did not back down from his approach. The Giants kept blitzing and eventually won the game by batting down a pass on fourth down.

The Giants' aggressive blitz packages force opponents to get rid of the ball quickly, which decreases the amount of time the cornerbacks have to cover and is a contributing factor to the Giants leading the league with 10 batted passes. 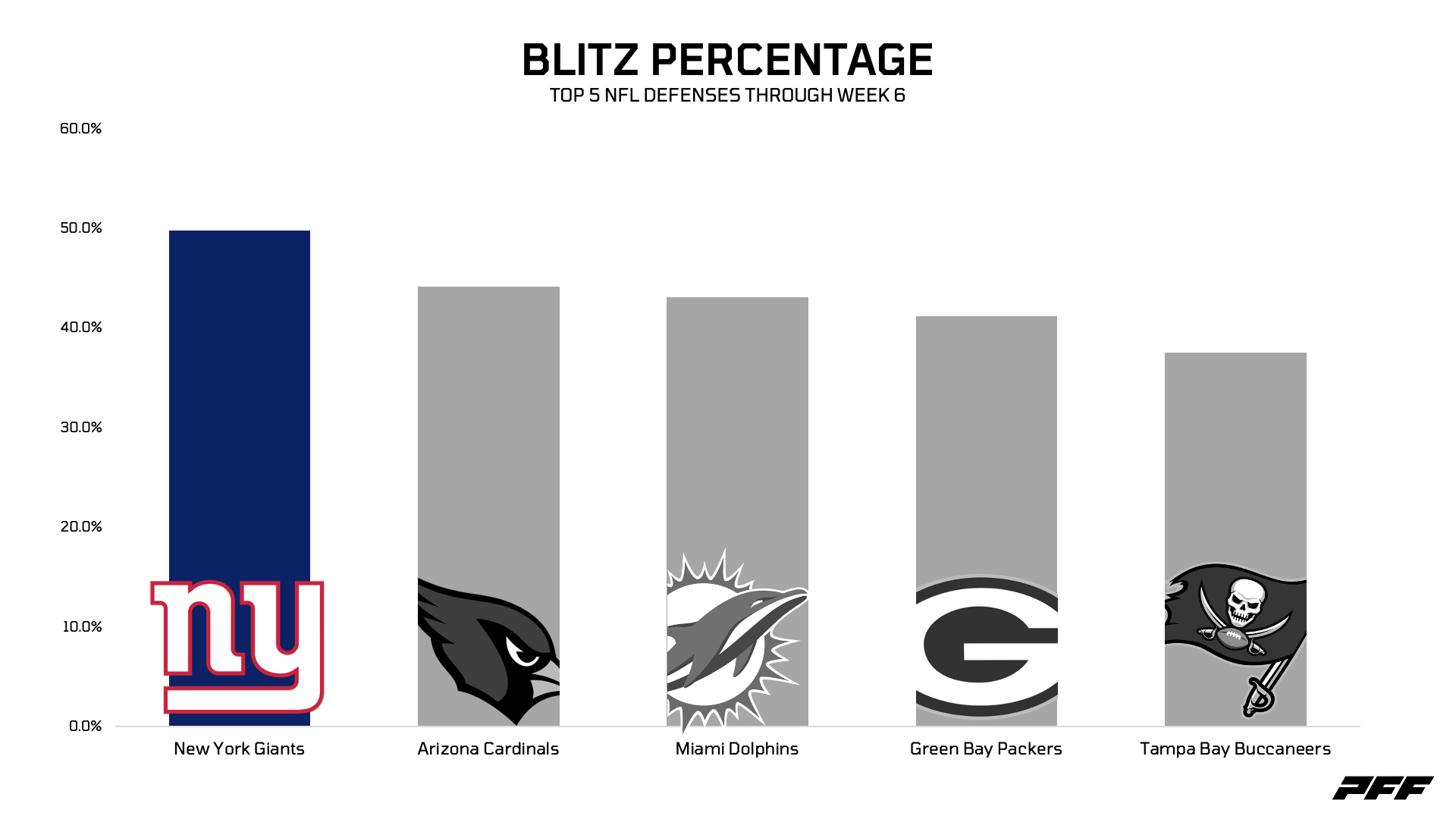 Even though New York’s secondary faced injuries and had to play inexperienced players, the Giants' aggressive scheme ranks third in the NFL in completion percentage allowed (61.6%) and sixth in yards allowed per coverage snap (5.47) despite quarterbacks posting the ninth-highest average depth of target against them (9.4).

While it would be an exaggeration to call the Giants’ approach smoke and mirrors, this cannot be sustained for an entire season so enjoy it while it lasts. However, the start of the Daboll era must be very encouraging for Giants fans, as it is a sign of things to come once the roster is improved over the coming years.