The Minnesota Vikings have agreed to terms with pass-rusher Everson Griffen, per ESPN's Jordan Schultz.

???? Breaking: #Vikings have agreed to terms with veteran pass rusher Everson Griffen, per source. Griffen, 33, spent 10 seasons in Minnesota from 2010-2019 – earning an All-Pro nod and four Pro Bowl appearances. He has totaled 80.5 sacks during his illustrious career.

The Vikings will bring Griffen back into the fold one year after the two sides mutually agreed to part ways, likely for a contract near the veteran minimum.

Before the 2020 season, Griffen elected to void the final year of his four-year, $58 million deal signed with the Minnesota Vikings in 2017. The two sides were unable to agree on a reworked contract, and Griffen chose to pursue other opportunities in free agency with the understanding Minnesota would otherwise release him to clear $13 million in cap space.

The veteran pass-rusher ended up signing a one-year, $6 million contract with the Dallas Cowboys in free agency and was subsequently traded to the Detroit Lions for a conditional sixth-round pick before Week 8 of the 2020 season.

Griffen figures to play in a reduced role, with his 2020 snap total (496) the lowest since his second NFL season in 2011. The Vikings have used three picks between No. 90 and No. 135 on edge defenders over the last two drafts in an effort to replace Griffen’s production (D.J. Wonnum, 2020; Patrick Jones II and Janarius Robinson, 2021).

Does Minnesota have one of the best defensive lines in the NFL? After fielding the worst defense of the Mike Zimmer era tenure, the Vikings went out and signed Dalvin Tomlinson in free agency and just brought in Griffen to make sure it doesn’t happen again. They will also be getting Danielle Hunter back from injury and Michael Pierce (89.8 PFF grade since 2016) back from the opt-out list. 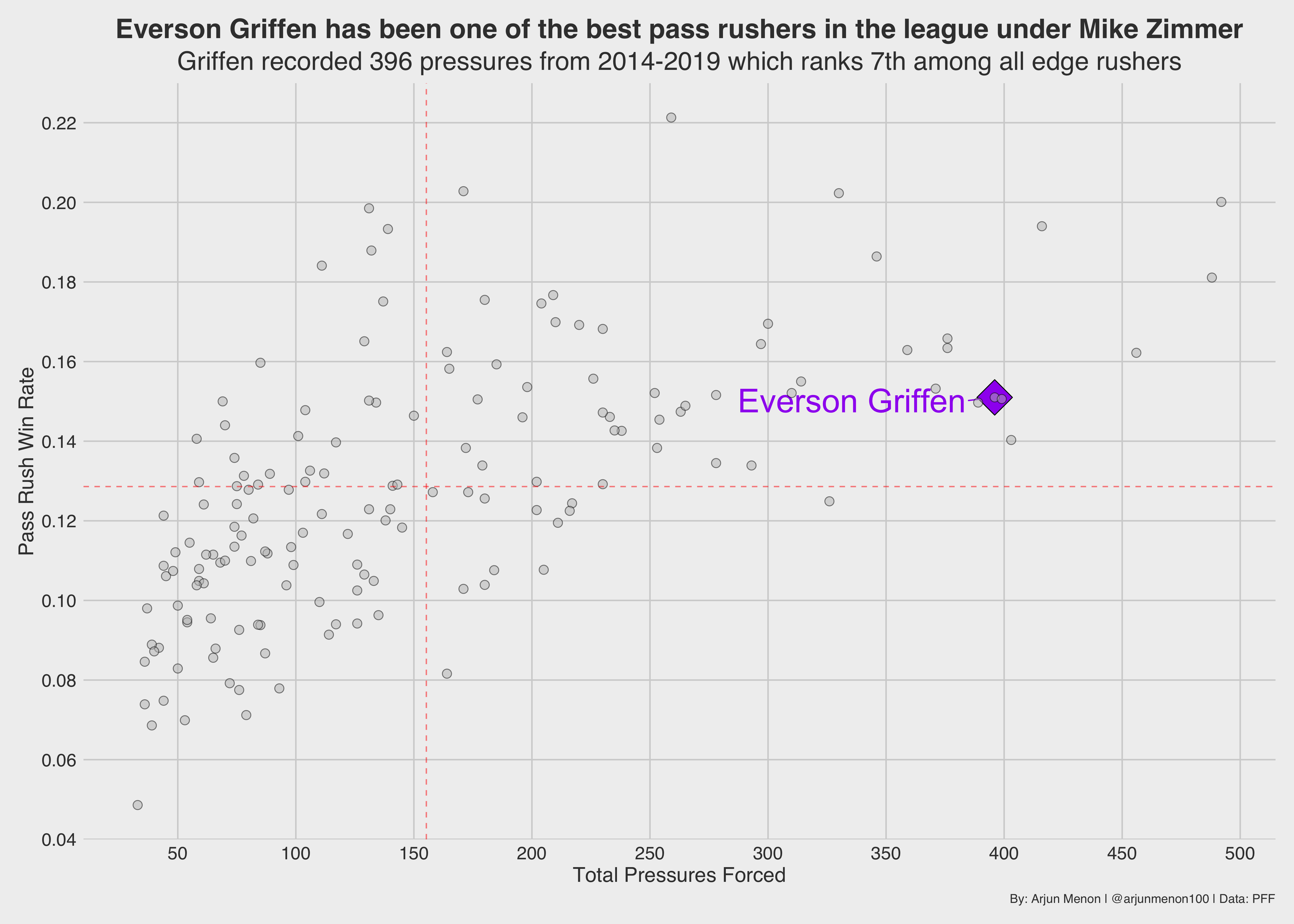 Full-time or rotational pass-rusher? Griffen has been much more effective as a pass-rusher than run defender, recording a higher pass-rush grade than run-defense grade since 2015. The only year he earned a higher run defense grade was 2018 when he played only 11 games due to injury. Click here for PFF player grades…

Griffen’s spot on the line? Griffen primarily played on the right side of the defensive line, going up against the offense's left tackle. Over 78% of his snaps have come on the right side in his career, a trend that will most likely continue this season. Click here for PFF Premium Stats…