Why the Los Angeles Chargers have the NFL's best secondary

Even for the NFL’s best defenses, achieving consistent and successful pass coverage can be elusive. Injuries, assignment errors, improper technique or even breakdowns in communication are just a few of the contributing factors when it comes to coverage volatility from year to year. But despite the injuries — and at times inconsistent play — the Los Angeles Chargers and their Cover 3 scheme have earned a team coverage grade of 93.1 over the last three seasons, tops among teams in that span.

Here, we examine the stability of Gus Bradley’s system and the players’ ability to execute the tenets of its unique design.

When the L.A. Chargers made Gus Bradley their defensive coordinator in 2017, they inherited one of the architects of Seattle’s “Legion of Boom” defense — a defense that used the Cover 3 scheme to develop one of the league’s top secondaries. Now, Bradley has used the same system to help the Chargers build a similarly productive coverage unit.

In a league dominated by the passing game, nearly a third of the NFL’s 32 teams use a three-deep zone shell as their primary coverage scheme, and every team uses the scheme to at least some degree. The Chargers led the way last season by using Cover 3 on 66.3% of their 923 coverage snaps.

By design, the deep-third coverage helps to limit big pass plays. Defenders execute a “top-down technique,” remaining just slightly deeper downfield than the intended receiver. In 2019, the Chargers limited their opponents to the second-fewest explosive pass plays of 15 plus yards (64) and only just fell short of the first-place San Francisco 49ers, who allowed 57 such plays while playing three deep on 41.9% of their coverage snaps.

Principals of the Chargers’ Cover 3 scheme

Over the last three seasons — ever since Bradley began running the show — the Chargers’ team coverage grade while playing in a three-deep zone shell (92.7) ranks first in the NFL. They have been targeted a league-high 757 times on 918 snaps of Cover 3 during the last three regular seasons, but despite the large sample size, they have still allowed an average of only 5.8 yards per play in such alignments, the fourth-best mark league-wide.

The Chargers’ unique coverage design initially appears to resemble a single-high man-coverage alignment. But at the snap of the ball, both cornerbacks bail vertically while maintaining tight outside leverage on the wide receivers. With vision set inside on both the quarterback and the receivers, their corners can maintain proper depth, which then allows them to play a combination of multiple routes within their zone responsibilities. 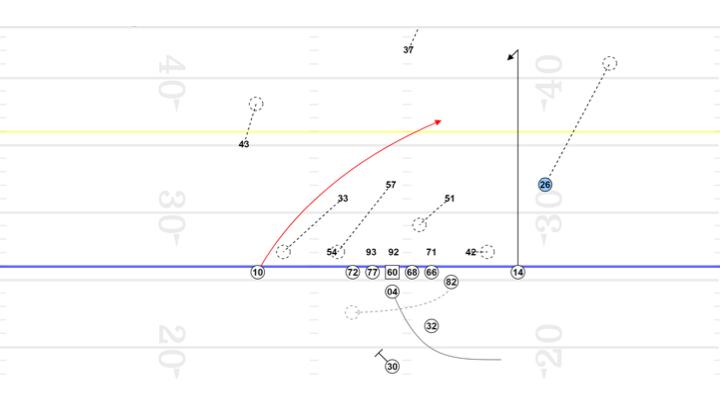 This diagram illustrates cornerback Casey Hayward Jr. maintaining his depth to defend the vertical route that threatens his deep-third zone before closing in to force an incompletion. The same play can be seen below.

The pre-snap alignment also gives off the appearance of single-high man coverage with the cornerbacks in an off-man alignment. Here, Hayward’s presence on top of the threatening vertical route gives the quarterback a false read of man coverage whereby his receiver on the crossing route appears to be open, but Heyward has the vision and quickness to close in and prevent the completion.

From this same pre-snap position, both cornerbacks can easily deploy the top-down man-coverage technique that is designed to look identical to their Cover 3 zone concept. The similar appearance of both man and zone alignments are designed to confuse the quarterback into making errant passes, just like the one you see above.

Hayward is the cornerstone of the Chargers’ top-rated defensive backfield. His 92.3 coverage grade ranks first among the 82 cornerbacks who have played at least 900 coverage snaps over that span, and his 25.3% forced incompletion rate ranks first among the 102 cornerbacks who have seen at least 100 targets. He has also allowed a catch rate of just 50.6% and a passer rating of only 80.6 since 2017, third and 24th, respectively, among those 102 players.

All The Right Parts

While nine-year veteran Chris Harris Jr. is more than capable of filling the slot corner position in the Chargers’ defensive backfield, Desmond King II is also capable of continuing his role as the team’s leading slot defender.

King has earned a PFF coverage grade of 91.3 over the last three seasons, third among cornerbacks who have played at least 900 coverage snaps, and he’s allowed a passer rating of just 92.6 on throws into his slot coverage over that period, ninth among qualifying players.

King has both the quickness and instincts to make big plays while patrolling the slot in the Chargers’ Cover 3 scheme. 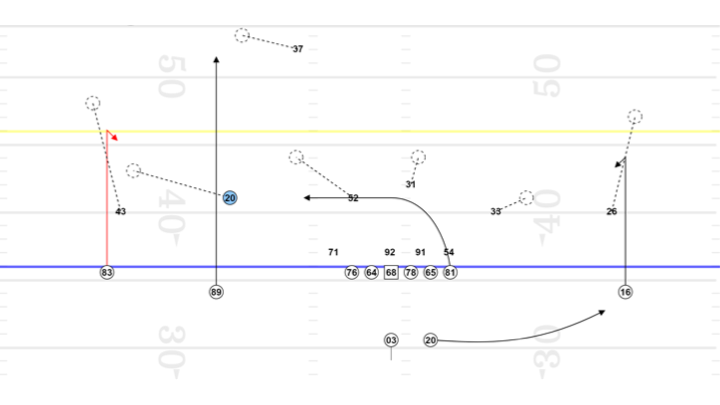 In the below above, King is lined up as an underneath slot defender in the Chargers’ Cover 3 zone. He remains disciplined as he holds the vertical seam route while locking his vision inside on the quarterback. He makes a timely break on the pass intended for the second receiver in his coverage area, and his leverage on the outside shoulder of the slot receiver allows him to have the proper spacing between both receivers to play the defense perfectly.

King has a knack for creating big plays. Over the last three seasons, his 9.6 yards allowed per reception is third-best among the 54 cornerbacks who have seen at least 170 targets since 2017. His 1.09 yards per coverage snap ranks 19th among that very same group of players.

When the Chargers added Chris Harris Jr. in free agency this offseason, they inherited a cornerback who has earned a coverage grade of 94.9 over the last three years while playing both outside and inside within the Denver Broncos defense.

Last season in Denver, Harris Jr. proved his fit in a Cover 3 scheme. The Broncos played 245 coverage snaps while aligned in a three-deep zone concept (24.4%), 19th in the NFL. So, his experience in a three-deep system gives him an excellent feel for the existing holes in this familiar coverage. 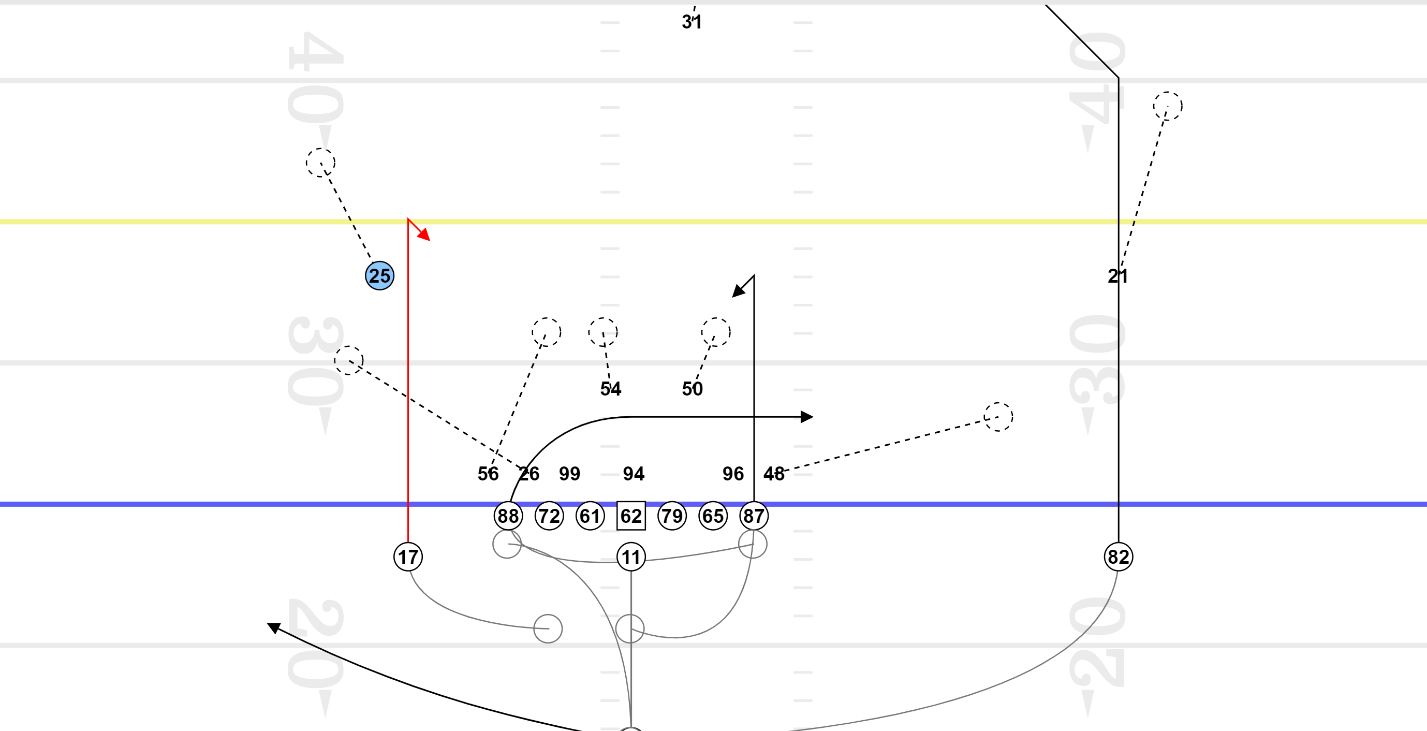 Here, he recognizes the tight splits in the alignment by the wide receiver. While Harris is responsible for his outside deep zone, he baits the quarterback into expecting Harris to widen following the running back’s fast release outside the numbers. While defending his deep-third area, Harris then matches the combination pattern between the back and receiver by falling inside, ultimately defending the curl route with excellent timing and recognition.

Harris demonstrates excellent discipline and can read combination patterns by multiple receivers; he has the skill and experience to quickly determine the immediate threat in his coverage area.

Over the course of his NFL career, Harris has allowed a passer rating of just 72.2 on throws into his coverage, and he has graded above 75.0 in seven of his nine professional seasons. He will bring stability to the outside corner position opposite Casey Hayward Jr.

Do-it-all safety Derwin James is arguably the best player in the Chargers’ uber-talented backfield, and his wide range of physical skills allows Gus Bradley the flexibility to deploy him in multiple roles beyond his duties in the secondary.

In the play below, you will see James as part of a defensive package that has fielded six defensive backs, commonly referred to as a “dime defense.” James is the “dime defender” here, and he is aligned in the box as a linebacker. But as is the case with James, his proximity to the line of scrimmage also makes him a real threat to blitz the quarterback. 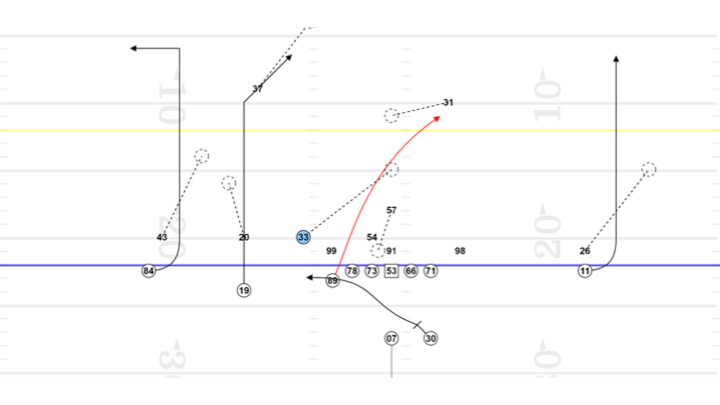 James is not only a physically gifted athlete, but he is also an intelligent defender. His initial alignment on the line of scrimmage disguises his man coverage on the tight end. James then uses his teammate in centerfield as help, which allows him to undercut the tight end’s crossing route and jump the passing lane for the interception.

Last season, James missed 11 regular-season games while recovering from injury. But in 2018 — his first year in the NFL — he played 1,169 snaps across multiple positions and graded above 80.0 as a pass-rusher, in run defense, in coverage and overall.

Simply put, James gives the Chargers a rare coverage defender who can cover wide receivers, running backs and even the best tight ends in the game. And his health and overall leadership will be critical in helping the unit fulfill its potential as the NFL’s best secondary.