It has felt like a decade since the inception of the “should the Cowboys pay Dak Prescott?” debate, but now that talk can finally come to a close, as Jerry Jones and the Dallas Cowboys brass handed the quarterback a monster four-year, $160 million contract. The deal, which was announced on Monday, includes a no-trade clause and $126 million fully guaranteed.

In the end, Prescott clearly won. But was it the right call on the Cowboys’ part to hand out that massive deal?

The answer is yes. Absolutely. Prescott may not be on the same tier as Patrick Mahomes, but he is a top-10 NFL quarterback. Half of the teams in the league would kill to be able to hand that kind of money to a passer of Prescott’s caliber.

With Prescott locked up for the future and set to fully recover from the gruesome ankle injury that ended his 2020 season, we can start talking about the Cowboys becoming legitimate Super Bowl contenders within the next few years.

There’s a narrative that teams can’t win long-term once they pay a quarterback the big bucks. However, as my colleague Eric Eager has explained, what matters most is how much a team invests in its passing offense and how much value they get on a per-dollar basis at the relevant positions.

The first season of the Mike McCarthy era in Dallas was nothing short of underwhelming. Expectations were high early on in the season when Prescott was healthy, and it was quite obvious the team didn't meet them.

The team went 1-3 over the first month of the season with Prescott at the helm, with that one victory coming against an Atlanta Falcons team that choked the game away late due to a botched onside kick by their special teams unit. But as bad as the start may have been with Prescott under center, it isn’t indicative of this franchise's potential in 2021 and beyond.

Prescott was the seventh-highest-graded passer in the NFL over the first five weeks of the 2020 season. He led the league in deep passing yards with 507, and the Cowboys were among the 10 best offenses in successful pass play rate.

This wasn’t much different from the 2019 season when Prescott was one of the three most valuable quarterbacks in the league, according to PFF WAR.

Kellen Moore has been able to harness Prescott’s deep passing potential in the years since he was appointed offensive coordinator in 2019, and it has paid big dividends for the passing offense. Over the span, Prescott has produced the highest deep adjusted completion percentage at 53%. 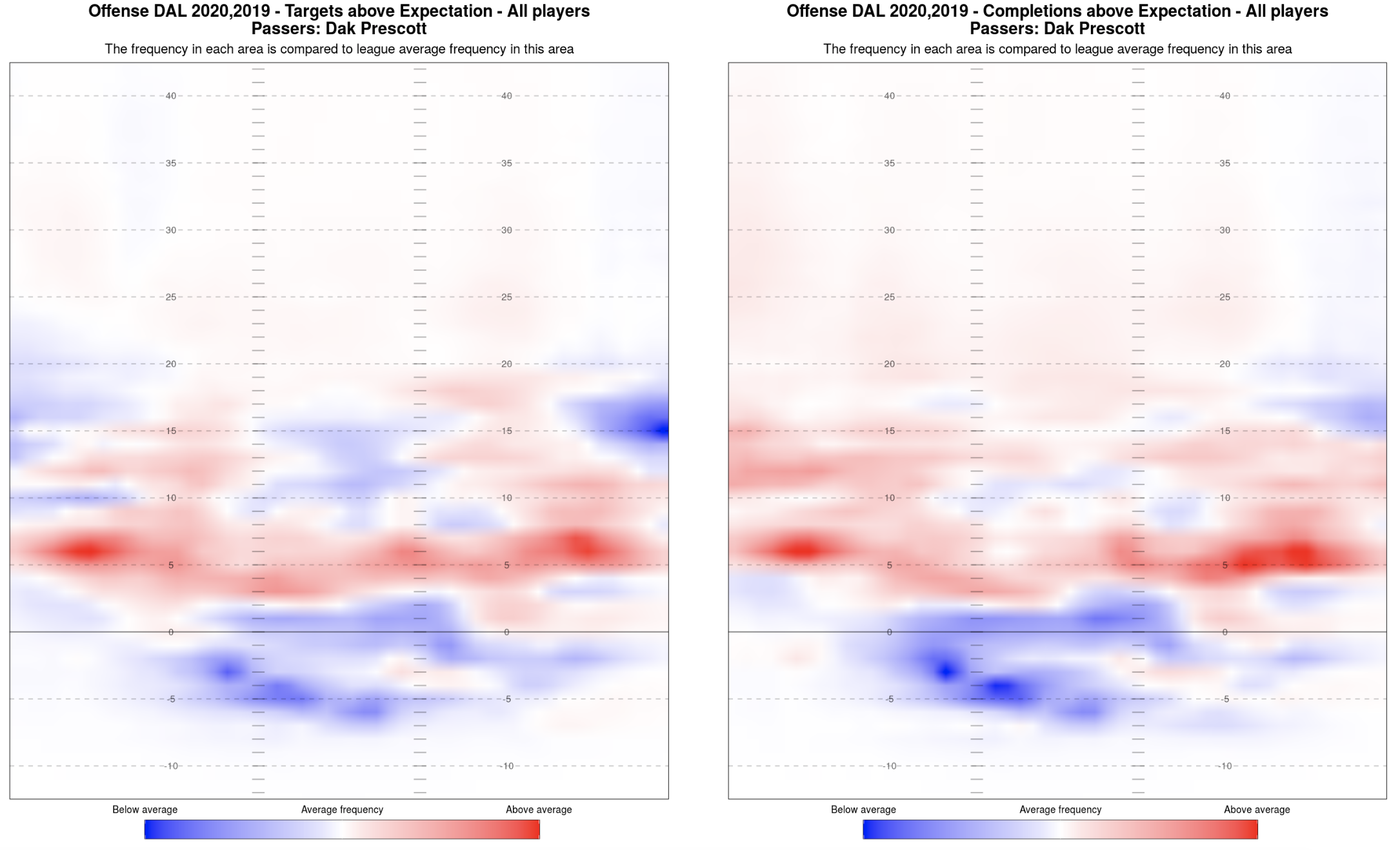 In addition to having a top-10 quarterback and one of the best playcallers in the league with Moore, Dallas also has one of the most formidable receiving trios in the game.

With Prescott on the field over the last couple of years, Amari Cooper, one of the best route-runners at the position, has been the second-highest-graded outside receiver in the NFL behind only Julio Jones.

At the same time, Michael Gallup cracked the top 25 in that same metric while ranking second to only Calvin Ridley in 15-plus-yard receptions generated on the outside in that span. Gallup can’t separate at an elite level —  which did him no favors when his starting QB went down — but Prescott can actually give him chances to make plays in one-on-one scenarios. And Gallup can hold up his end of that bargain.

The Cowboys’ passing offense has cooked with Dak. The proof is in the pudding. And by pudding, I mean EPA.

And let’s not forget about slot phenom CeeDee Lamb, who is poised for a big Year 2 in 2021 with a quality quarterback throwing him the ball. Lamb managed to overcome the Cowboys' lowly quarterback play in 2020 — and a bad case of the drops — to rank in the top half at the position for the season in both PFF WAR and receiving grade.

He attacked the middle of the field and showcased a great feel for finding soft spots against zone coverage. In fact, Lamb ranked third in receptions from the slot, finding a hole against zone on 21 catches — 13 of which came in the five games when Prescott was healthy.

The final piece to the passing offense puzzle is, of course, the offensive line. Prescott was among the eight highest-graded quarterbacks in the NFL from a clean pocket from 2019 up until his 2020 injury.

The offensive line doesn’t have to be elite; it just can’t be a liability. Last year, the group was among the latter largely due to injury. Left tackle Tyron Smith was limited to only two games for the year, and right tackle La’el Collins didn’t even play a down. And the team's backups, who were underperforming as is, also battled injuries. As long as Smith and Collins are back healthy and return to their previous forms — top-eight left and right tackles, respectively — in 2021, this group shouldn’t be a concern.

Things get tricky on the defensive side of the ball, though. If anything is keeping Dallas from building a contender in the short-term, it’s the defense. The unit was to blame for much of the Cowboys' early-season struggles in 2020.

With Prescott at the helm through the first five weeks of the season, the team ranked dead last in coverage grade. And over the entire campaign, the Dallas coverage unit tied with Detroit for the most 25-plus-yard touchdowns allowed (12, which also tied for the fifth-most by a team in the past decade).

It’s safe to say that Dallas' front office regretted giving Ezekiel Elliott a monster deal following his holdout in Cabo in 2019 as opposed to saving that cash for Byron Jones, who left for Miami and is one of the 10 most valuable cornerbacks over the past three years. The good news is that despite having minimal cap space, the Cowboys are in a good position to improve their defense to a somewhat manageable unit in the coming months through free agency and the 2021 NFL Draft.

As of now, Dallas is a little over $1 million above the salary cap. The Cowboys can open up about $10 million in cap space with some restructures, and they can then attack the edge defender and slot corner positions.

Retaining free agent edge rusher Aldon Smith would be a wise decision. After a four-year hiatus, Smith returned to the NFL and played extremely well given the circumstances, posting a 70.0 pass-rush grade (34th at the position) and a 16% pass-rush win rate (24th).

With slot corner Jourdan Lewis set to also hit the open market, it’s vital for Dallas not to ignore the slot corner role — the most undervalued position in the game. NFL teams still don't properly value slot corners, and the slot market is massive this offseason, so Dallas can get a good one for cheap.

K’Waun Williams and Desmond King II are two premium options that would fit perfectly into Dan Quinn’s defense, each costing under $6 million per year. Darqueze Dennard, who spent time with Quinn in Atlanta and has spoken highly of the coach, is an under-the-radar name to watch. Over the past four seasons in both Cincinnati and Atlanta, Dennard's slot coverage grade ranks around the 60th percentile among qualifying defensive backs. He will cost pennies on the dollar while providing versatility and being able to hold his own on the outside.

Dallas holds the No. 10 and 44 overall picks in the first two rounds of the 2021 NFL Draft. With the hot and heavy quarterback market, three blue-chip wide receiver prospects and other “generational” prospects like tackle Penei Sewell, tight end Kyle Pitts and off-ball linebacker Micah Parsons, the Cowboys are more than likely to see PFF’s CB1 — Caleb Farley of Virginia Tech — fall right in their lap for their first-round selection.

Farley's 2019 season was one of the best we have ever seen from a Power 5 corner in the PFF College era — it was a true lockdown year. He generated a 90.5 coverage grade while giving up just nine first downs on 50 targets and making 14 plays on the ball. He allowed a passer rating of only 26.8 on throws into his coverage, the third-lowest mark among all Power 5 cornerbacks with at least 50 targets in a single season over the last seven years.

The system at Virginia Tech is vastly different than the one he’d play in Dallas under Dan Quinn; Farley hardly saw any press action at the collegiate level and would see a good amount of it as a Cowboy. That said, Farley has the perfect physical skill set for Quinn’s Cover 1- and 3-heavy defense and is bound to thrive in this system. He has the size and length desired at the next level at 6-foot-2, 197 pounds, and he pairs that with unbelievable speed (he reportedly ran the 40 in the low 4.3s).

As we witnessed this past season, it doesn’t matter where a corner is drafted; it’s ambitious to expect a rookie corner to come in and provide great play right away. In Dallas’ case, they just need Farley to come in and provide stable — not necessarily great — play quickly. They’ll also need second-year corner Trevon Diggs to continue to show signs of growth as he did down the stretch in 2020. Diggs played in 12 games as a rookie and had staggeringly different halves. He struggled with a 43.9 coverage grade in his first six games. Over his final six games, Diggs exceeded expectations with an 83.4 coverage grade.

Once they address the most important position on the defense in Round 1, Dallas should direct their attention to an interior defender who can hold his own at nose tackle and won’t be a liability against the run in Round 2: specifically, the thick and explosive Alim McNeill of NC State.

The 6-foot-2, 320-pound interior defensive lineman has a ridiculous get-off that few interior offensive linemen can handle. After playing primarily as a defensive tackle during his 2018 true freshman season, McNeill moved to 0-technique in 2019 and produced a 79.4 PFF grade.

He then broke out to elite status in 2020 with a 90.7 grade in the same role. He was a constant force against the run, earning a 92.1 grade in that facet. Despite playing almost solely at heads-up nose, McNeill was a fairly productive pass rusher in 2020 (77.5 pass-rush grade). However, he doesn’t have much in his pass-rush toolbox and is fairly raw. He still managed to dominate from his role, though.

Re-signing Aldon Smith, bringing in a new slot corner and drafting Farley and McNeill would be significant steps toward getting the defense back to an at least average level, as opposed to the full-blown liability it was last season. And with the Cowboys' passing offense with Prescott at the helm, that’s all they really need.

Injuries destroyed the first year of the McCarthy era in 2020 and played a massive part in an underwhelming 6-10 record. With Prescott's return, this team is bound to run the NFC East in the years to come. A few other subtle moves this offseason — along with the return of their two starting tackles and growth shown from second-year players Lamb and Diggs — could put this team truly in contention within the next couple of years. At the least, I expect the Cowboys to play for an NFC Championship in either the 2021 or 2022 seasons if all goes according to plan this offseason.