Eleven weeks of NFL action are officially in the books, so let’s dive into the PFF data to check in on each first-round rookie.

This week, the weight of pressure finally got to Joe Burrow, knocking him from the game and ending his season due to a torn ACL. We were robbed of seeing what he could achieve with the rest of what was shaping up to be an excellent debut season. It wasn’t all as depressing as that, however, so let’s look at the full class.

The sad and seemingly inevitable conclusion of Joe Burrow’s woeful offensive line was finally realized this week when one hit too many saw his leg bend at an unnatural angle, tearing his ACL and ending his promising rookie season. Burrow’s offensive line isn’t just devoid of top-tier talent, but it has also been beset with injuries. It was always the biggest risk to his debut NFL season. Burrow was playing well before the hit despite a fumble down by the Washington goal line as he tried to rush for a score.

He will now have to rehab and hope to come back 100% next season while the Bengals desperately focus on upgrading his pass protection to ensure a similar injury doesn't occur in the future. What we have seen from Burrow this season has been tremendously encouraging despite circumstances that were not terribly conducive to high-end quarterback play. 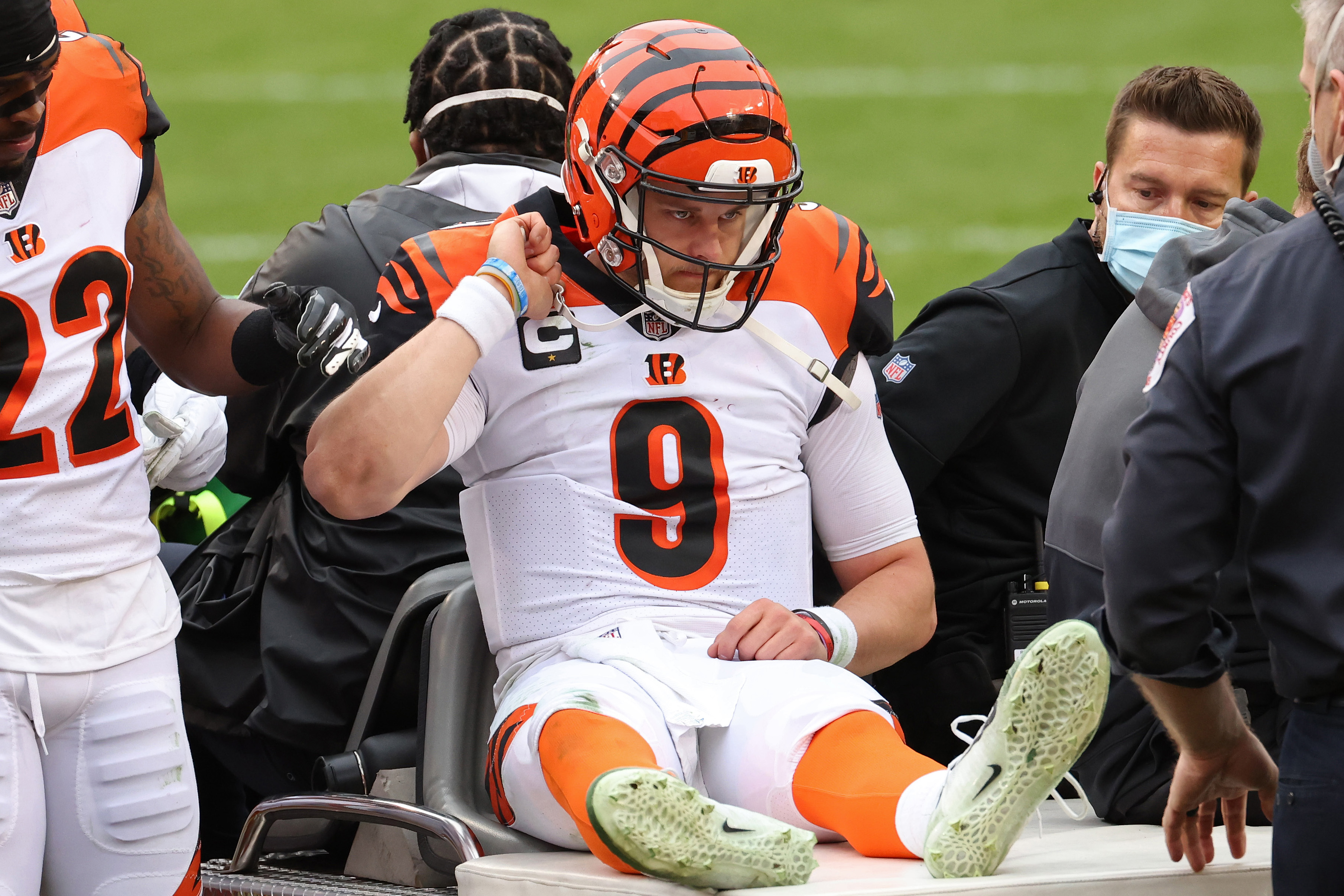 Chase Young was once again lacking in pressure this week, but Joe Burrow was getting rid of the ball in 2.31 seconds on average, giving him little real opportunity to apply much heat. Young did have three pass rush wins — even if they never had a chance to become pressure plays. In addition to that, he batted a pass and made a big hit on Burrow that forced a fumble at the goal line. Washington ultimately recovered it, resulting in a seven-point swing in his team’s favor.

Young has been one of the better defensive rookies in the league this season during a time when defenses have had little hope of slowing down opposing offenses in a record-setting season. Overall, it feels like we still haven’t seen him quite get back to where he was before an injury derailed his season, but the future is bright for Young in Washington.

Jeffrey Okudah isn’t an every-down starter anymore, but that can’t hide him from opposing offenses when he does see the field. Against Carolina this week, he saw 24 snaps of action and was targeted six times, allowing a catch in each instance. Those receptions went for 79 yards and a 118.8 passer rating. The good news for Okudah is that his run defense and tackling were solid, and this is a season in which coverage is a struggle for most cornerbacks and virtually all rookies.

It’s been a tough season for the No. 3 pick, and it would be difficult to pick out many positives, but he can at least take comfort in the schadenfreude of knowing that he’s not alone. The Lions will be hoping that this season is laying the groundwork for better play in the future.

The Giants were on a bye; here’s what we said after Week 10:

Andrew Thomas saw his PFF grade for the season go down after this game, but he has been trending up in recent weeks in terms of pass protection. He opened his rookie season with seven straight games of sub-60.0 PFF pass-blocking grades thanks to the team reworking some of his technique. However, his past three games have all cleared that 60.0 barrier, and they have come against three of the best defensive fronts he has faced.

This week, he allowed four total pressures against the Eagles on 36 pass-blocking snaps, but they were less severe losses than he was suffering earlier in the season. Thomas has been left behind by the rest of his rookie tackle brethren, but he may be closing the gap on them as the season wears on.

Tua Tagovailoa had a rough day against a Denver defense that still has a lot of juice under Vic Fangio. Tagovailoa earned a mere 51.9 overall PFF grade and was struggling throughout the game in pretty much every aspect. Ryan Fitzpatrick took over in what looked initially like a swap forced by a hit Tagovailoa took from Bradley Chubb, but his head coach later confirmed it was purely a performance-driven call. Fitzpatrick — as if to highlight the issues — performed no better, offsetting any uptick in production with more carelessness with the football.

Tagovailoa’s rookie season is likely to come with some growing pains, and the situation could be complicated if he doesn’t have the runway to clear those issues before being pulled from the game for Fitzpatrick. Overall, he has clearly been the third-best rookie quarterback from the first round so far, but he's also had the least playing time of the three who have seen NFL action.

If you thought last week against Miami signaled the start of the Justin Herbert regression, this week showed it was just a blip on the scope — or, at most, the result of a defense playing out of its skin right now. Herbert was again hugely impressive against the Jets, showing off a rare degree of arm talent and avoiding critical mistakes that have been his biggest failing. He was also rewarded with a win, something that has been all too infrequent given his play this year, though the Chargers' defense did its best to make it a close affair late.

Herbert has outperformed all but the most optimistic of preseason projections and doesn’t seem to be showing any inclination to regress from the big-time plays that have been a feature of his rookie season. The Chargers look to have made an outstanding pick at quarterback; now, they just need to fix the other issues plaguing the team.

Carolina’s win against the Detroit Lions was impressive, and Derrick Brown flashed ability on the defensive interior. The team’s top draft pick had three total pressures in the game, his third performance in four weeks that featured three or more total pressures. With 31 pass-rushing snaps, he had ample opportunities to generate that pressure, but at least one rep was a decisive win against fellow rookie Jonah Jackson.

Brown has come on as the season has progressed and become more of a force as a pass-rusher. It seems to have come at the cost of consistent run defense, however, which was only ever-present against the weaker competition he faced earlier in the season. Brown still boasts immense potential, but his technique and consistency need refinement if he is to hit his ceiling.

Back on Thursday night, Isaiah Simmons played 45 defensive snaps against the Seahawks in what was a new high for his rookie season. And he put together one of the better games of his career so far.

With injuries opening some opportunities for playing time, Simmons now seems to have carved out a role in the Cardinals' defense and looks more comfortable at this level. He has played at least 30 snaps in each of the past three weeks and earned a 64.0 overall PFF grade or better in each outing since the first month of the season. Simmons was in on eight tackles against Seattle, five of which were defensive stops, and could be on his way to really emerging as an important playmaker for the team down the stretch.

It was a rocky transition for Simmons, but given the leap he needed to make in a new position and role, he has taken to it very quickly.