The NFL season officially starts this week with the Thanksgiving holiday. A lot has happened to shape the NFL in unpredictable ways. Two of the four most likely teams to win the Super Bowl were not even predicted to finish in the top two in their respective divisions. Some teams that came into the year with great fanfare in the NFC (Los Angeles, Chicago, Philadelphia) are not even likely to make the playoffs, while the Browns and the Chargers have disappointed out of the AFC.

Here, we give the top four contenders for Super Bowl LIV in Miami, ordered by the probability that they win it all. Since it’s very difficult to win the Super Bowl without first having a bye in the playoffs, we stick with these four until someone knocks one of them off of their perch (looking at you, Kansas City). 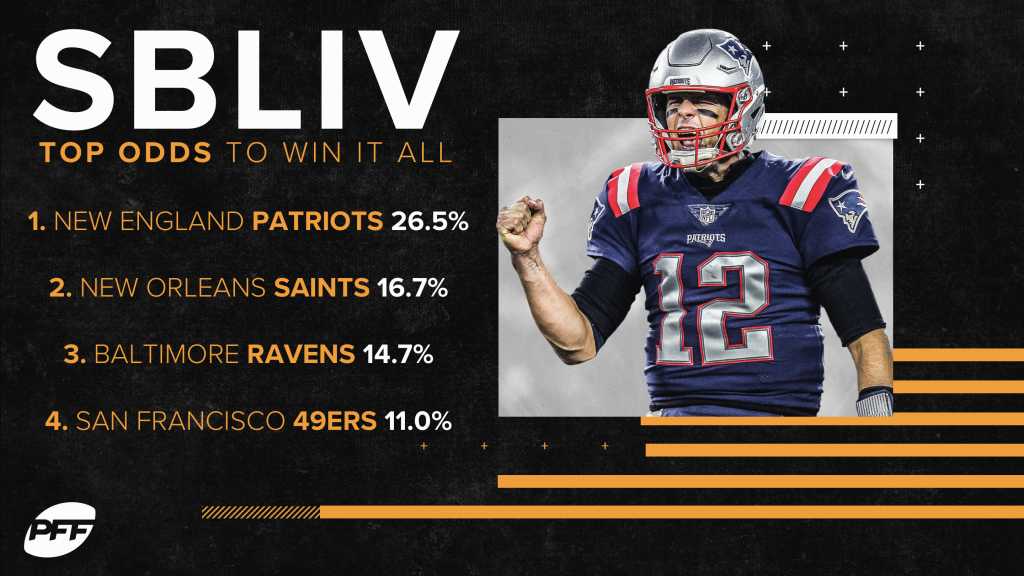 While it’s boring each and every year, here we are with the Patriots having the highest odds to win the Super Bowl for a record seventh time under Bill Belichick and Tom Brady. Unlike recent seasons, this team is built upon a great defense that carries them in most games, with defensive backs Stephon Gilmore, Jonathan Jones, Devin and Jason McCourty all generating a quarter of a win above replacement and a pass-rush that is the league’s ninth-highest-graded unit. They have big tests in three of the next four games, facing off against Houston, Kansas City and Buffalo. With the Ravens on their heels, they likely can’t afford too many missteps as the loss of home-field advantage throughout the playoffs lowers their Super Bowl-winning odds to under 21%.

Unlike a season ago, when it was the consensus that the Saints were the frontrunner in the NFC, the attention right now is fixated not on New Orleans but San Francisco, despite the Saints’ 9-2 record and the league’s second most valuable receiver, Michael Thomas, having compiled 104 catches through 11 games and two starting quarterbacks. The Saints have a 36% chance to get home-field throughout the NFC playoffs for the second time in as many years, and they have a 73% chance to earn a bye. Should they get home-field, their odds of winning the Super Bowl increase to over 21%.

The Ravens are scoring on a league-high 35% of their drives, which not only leads the league but is the fourth-highest mark since 2006. Jackson is sporting a 116.1 passer rating from a clean pocket (third) and 7.1 yards per carry (first in the NFL), with 30 missed tackles forced (most among quarterbacks by 12). This Sunday, the biggest game of the NFL season will pit the Ravens against the 49ers in Baltimore in a game where the Ravens can increase their chances of home-field advantage to 34% with a win as they look to avoid taking a trip to New England.

The 49ers are fresh off embarrassing Aaron Rodgers in his return to his homeland, and they continue their march toward Miami on the back of a dominant defense and an offense that isn’t getting the credit it deserves. The 49ers' passing offense ranks ninth in expected points added per pass play on the heels of a play-action game that is run on 30% of pass plays and generates 8.9 yards per play-action play (third), making them the only offense with a 30%-plus rate and top-five yards-per-play average. The Niners' defensive line is a dominant force, which allows the defense to get pressure without blitzing — they blitz at the fifth-lowest rate while also leading the league in sack rate with and without the use of a blitz. A date with the Ravens and Saints will go a long, long way to determining how hard the 49ers' road to Miami ends up being.