The interwebs are already full of misguided takes on what the Los Angeles Rams gave up for Matthew Stafford in the blockbuster trade announced Saturday night. The trade was a pivotal move for both franchises, and the risks and rewards extend beyond the particulars of the deal. There are a handful of key points to understand when analyzing the trade and its ramifications over the next few years.

The trade compensation wasn’t the haul some think

A superficial accounting lists two first-round picks, a third-round pick and Jared Goff as the compensation for Stafford. But those first rounders are future picks, and the trade market has traditionally discounted future picks significantly.

We can get an estimate of the current trade value for future first-round picks by analyzing the last three trades with future first rounders added onto easily valued current picks.

Using values from the Jimmy Johnson trade chart, the implied values for future first-round picks in the above transactions can be found by calculating the difference between the value of current picks received and traded away. Patrick Mahomes and Deshaun Watson were acquired in the 2017 draft at pick No. 10 and No. 12, respectively, and each included a future first as part of the trade compensation. It was the same situation when the New Orleans Saints traded up for Marcus Davenport in 2018.

The implied values of the future first-round picks in these deals ranged from roughly the 42nd (480 JJ value) to the 50th pick (387 JJ value), or solidly in the middle of the second round. If you consider that draft-day trades are probably more likely to overpay than in an offseason deal like this, you can move the value up a bit higher to the front of the second round. 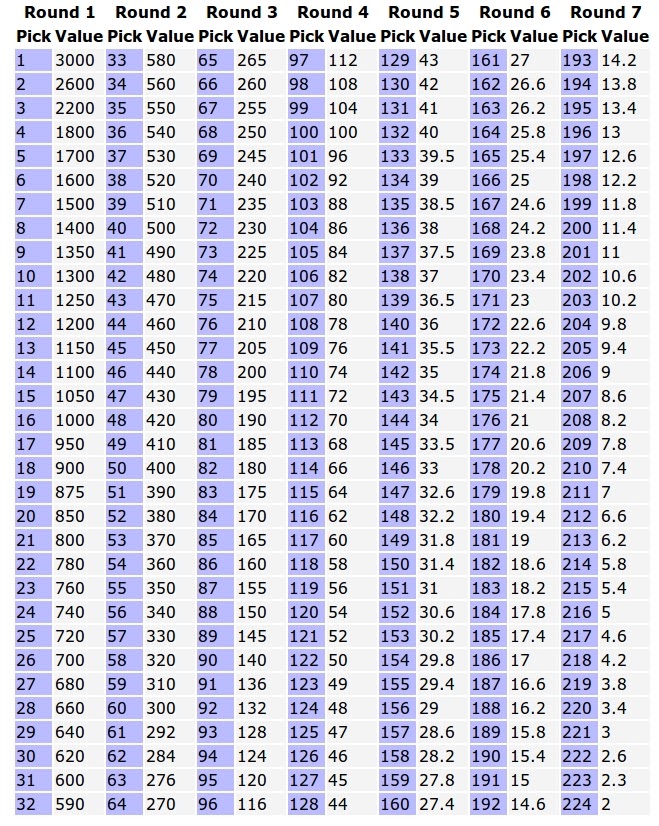 Noting their market values, the future first-round picks the Rams traded away should be viewed the same way as trade packages including current picks. It’s likely that teams undervalued future picks, but that doesn’t change the market dynamics that should dictate acquisition costs. If you add up the implied values of the future first-round picks and the current third-round pick the Rams traded away, the total value is in line with a 2021 first round pick in the 15-20 range.

There are reasons to think that the teams might value future picks more due to difficultly evaluating this offseason, or that the Lions specifically should value future, multiple picks more with a likely path of rebuilding ahead. Adding these considerations, the market value of the pick package could be viewed higher, but probably not as high as a single top-10 pick.

If you’re basing potential Deshaun Watson trades building on this deal as two first rounders, then you’re not capturing the discount on future picks and where they’ll likely be in the first round.

The Lions are doing the smart thing and embracing variance

While the market value of the Rams’ future picks might be lower than some think, the real value is probably higher. The Lions have given themselves the opportunity to benefit greatly from things going against expectations.

The baseline assumptions built into the trade are that the Rams will be a playoff team, picking near the end of the first round and that Jared Goff isn’t valuable with his current contract. It’s possible for these assumptions to get slightly worse for the Lions, but the downside is limited. If the Rams win the Super Bowl both years and the Lions are drafting at 32 instead of an assumed 25, it hurts a little. If Goff struggles and needs to be cut, the Lions will have dead cap charges — not the worst thing in a rebuild.

The downside risk for the Lions is limited, but the upside is huge. The Lions are now short the success of the Rams, and I explain below why that might not be the worst position to have. If the Rams struggle the next two seasons, the Lions could have multiple top-15 picks, or perhaps one top-10 if things really go badly. The jump in value going from an assumed draft position of 25 to the top-10 is enormous — much greater than the downside of falling to 32. If the former No. 1 pick Goff can turn things around and play like he did in 2017-2018, the Lions could have a real franchise quarterback or a valuable trade asset in a year or two.

The Lions probably aren’t competing for the next couple of years, so acquiring assets with limited downside and disproportionate upside is the perfect play to raise their ceiling going forward.

I hate to step into #QBWinz territory here, but this might be how Stafford is judged a season or two post-trade. The Rams have been one of the most successful franchises in the NFL the last four seasons, whether you think that’s because or in spite of Jared Goff. The Rams ended the last four years with one trip to the Super Bowl, two other playoff appearances and a 9-7 record that would have been good enough to make the playoffs under the format the NFL adopted last season.

What carried the Rams in 2020 wasn’t Goff, who ranked 19th in PFF passing grade (71.9), but a defense that had the best grade in the NFL (85.9). We know that defensive stability is lower than offensive, and the Rams lost Brandon Staley, their wiz kid coordinator who became the head coach of the crosstown Los Angeles Chargers. The Rams were relatively lucky with injuries before the playoffs, with Jalen Ramsey, Aaron Donald and many other key contributors playing full or nearly full seasons.

If the Rams defense falters with bad injury luck, difficulty adjusting to a new coordinator or lose key free agents like John Johnson, Leonard Floyd and Troy Hill, the team could miss the playoffs, even if Stafford is playing at a higher level than what we’ve seen from Goff.

Our grading didn’t see a huge difference between the performance of Stafford and Goff since 2017 (excluding Goff’s disastrous rookie season), with Stafford posting a PFF passing grade of 84.7 and Goff at 81.6. Though Goff’s numbers had been on a steady decline in the most recent seasons, Stafford had one of his best years ever in a shortened 2019.

The Rams have been in win-now mode for years, and this deal pulls even more future assets into the present. With this trade, the Rams won’t, as of now, have made or hold any of their first-round picks over a seven-year window from 2017-2023.

The total list of picks traded for Jared Goff (the No. 1 pick), Jalen Ramsey and now Matthew Stafford is something to behold:

All of the traded picks mean fewer opportunities to fill the roster with cheaper rookie contracts, some of the best values in the NFL. As of now, the Rams’ the top-10 cap charges in 2021 add up to more than $140 million, which would equal more than 75% of a hypothetical $180 million COVID-affected salary cap.

Without the breadth of talent that comes from cheaper rookie contracts and cap space for mid-range free agents, the Rams will have one of the most fragile rosters in the NFL. If the Rams’ top players, like Stafford, Donald, Ramsey, Cooper Kupp and Robert Woods, can stay healthy, they’ll be a top competitor in 2021. But any injuries or unexpected dips in performance could sink the Rams' precarious roster.

Looking forward, the loss of picks in 2022 and 2023 compounds the team’s difficulty in building back a talent pipeline, which not only provides cheap current deals but also leads to extensions that come much cheaper than paying for talent in free agency or via trades.

The Lions are in on Jared Goff as their franchise quarterback, for now

The trade value discussion above showed that the pure package of picks for Stafford, excluding Goff, wasn’t necessarily a lot more than what the Lions could have gotten from other teams. Reportedly, there were multiple suitors for Stafford willing to give up at least a first-round pick, which would put these other trades in the ballpark of the compensation the Lions received from the Rams.

The powers of deduction can only lead us to assume that the addition of Goff to the deal was viewed by the Lions as, at worst, of slightly negative value. The Lions likely don’t see Goff’s contract, which will pay him $27.2 million per season over the next two years, as a significant deadweight.

Goff’s contract has guarantees of $27.5 million in 2021 and another $15.5 million in 2022, meaning he’s not a player you acquire with the intention of then cutting with minimal cost. Brad Holmes, the Lions’ new general manager, is familiar with Goff from his time working in the Rams’ front office, and he could very well view Goff through a more positive prism than football pundits who thought he could only be moved if the Rams gave away additional compensation.

Sure, the Lions could draft a quarterback with the No. 7 pick, making Goff a placeholder, but making this deal means that doesn’t have to happen, at least this offseason.

What this also means is that the tank, at least the intentional tank, is probably off in Detroit. There’s little chance Goff isn’t on the roster this coming season, and while he isn’t an elite quarterback, he brings more winning potential than other quarterbacks on the 2021 roster, like Chase Daniel, or one that the Lions could acquire in the draft with the No. 7 pick.

New head coach Dan Campbell has assembled a well-credentialed staff, and whatever we think of the bizarre moments in his introductory press conference, the attitude and actions for the Lions point toward a team looking to win in 2021, even if legitimately competing is far fetched.