Detroit Lions quarterback Jared Goff (16) high-fives teammates during warmups before the game vs. the Miami Dolphins at Ford Field in Detroit on Sunday, Oct. 30, 2022.

• Patrick Mahomes is the MVP: The Chiefs QB ranked second at his position in PFF grade over the regular season, but he led his peers in passing yards (5,401) and passing touchdowns (41). His 4.8% big-time throw rate and 2.3% turnover-worthy play rate were both top-seven marks among quarterbacks.

This wasn't a difficult pick. Yes, Geno Smith, Joe Burrow, Josh Allen all had terrific seasons in their own ways, but Mahomes was the most valuable signal-caller in the league according to PFF WAR (4.699) and rightly earned PFF's MVP Award.

His 91.3 PFF grade ranked second at the position over the regular season, but he led his peers in passing yards (5,401) and passing touchdowns (41). His 4.8% big-time throw rate and 2.3% turnover-worthy play rate were both top-seven marks among quarterbacks.

Gardner was nothing short of sensational as a rookie. He allowed the lowest passer rating (52.5) and the lowest completion rate (45.2%), producing the highest coverage grade at the position (90.2). On top of that, he also earned the highest overall grade among corners. Through 17 games of action, he allowed only 344 yards on 642 coverage snaps.

After being traded by the Chiefs, Hill continued his warpath in Miami, earning the highest PFF grade among wideouts over the regular season (92.1). From Week 1 to Week 18, 40.4% of the drives Hill participated in resulted in a score. He is second in receiving yards (1,754) and receiving first downs (77) among wide receivers, while his 49 catches of 15 yards or more lead the league.

Lindstrom earned a staggering 97.1 overall grade in Week 4 and was the only offensive lineman in the league to grade above 90.0. His 94.0 run-blocking grade spanned 35 snaps, and he allowed a singular pressure — a hurry — on 20 pass-blocking snaps.

In Week 9, Okereke produced five solo tackles — including three defensive stops — and forced a fumble. He also allowed just two catches for six yards from five targets into his coverage. 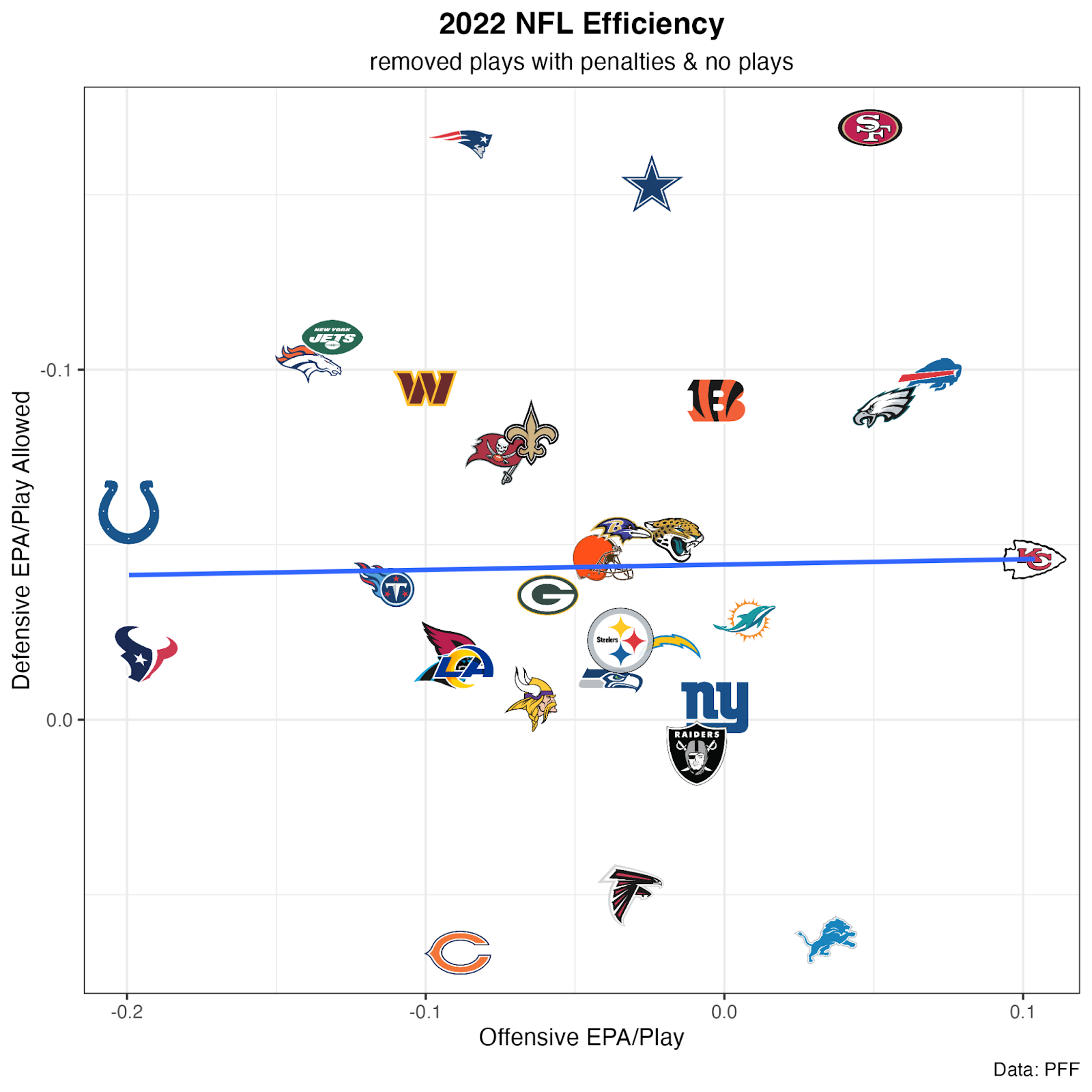 Over the regular season, 46.4% of Kansas City's drives ended in either a touchdown or a field goal, while 33% of drives ended in a score. To no surprise, no other team could match them.

The 49ers defense held their opponents scoreless on 74.3% of their drives, the highest rate of any team in the league. That's right, just over a quarter of opposing drives ended with a score.

They earned the second-highest team defense grade in the league (84.1) and gave up the second-least EPA per play (-0.138). They allowed their opponents to convert to a new set of downs or score a touchdown at the second-lowest rate in the league (26.9%) and didn't allow a single two-point conversion over the year.

The Lions rose 16 places in our power rankings over the season, a remarkable feat by Dan Campbell's men.

Early in the year, the Detroit offense was too reliant on explosive plays and fielded one of the worst defenses in the NFL. However, the offense took huge steps forward to end the year, and because offense matters more than defense in the modern era, it helped propel them to a 9-8 record.

The Lions finished the regular season ranked sixth in EPA per play on offense and go up to third in EPA per dropback when specifically looking at passing plays.

The Super Bowl 56 champions fell 20 places in our rankings. Injuries have plagued the Rams, who struggled without QB Matthew Stafford and WR Cooper Kupp. Their offensive line also took a big step backward after Andrew Whitworth’s retirement, and it seems like they still haven’t recovered.

They went from being on top of the world at 12-5 last season to close to the bottom of the pack this season at 5-12. 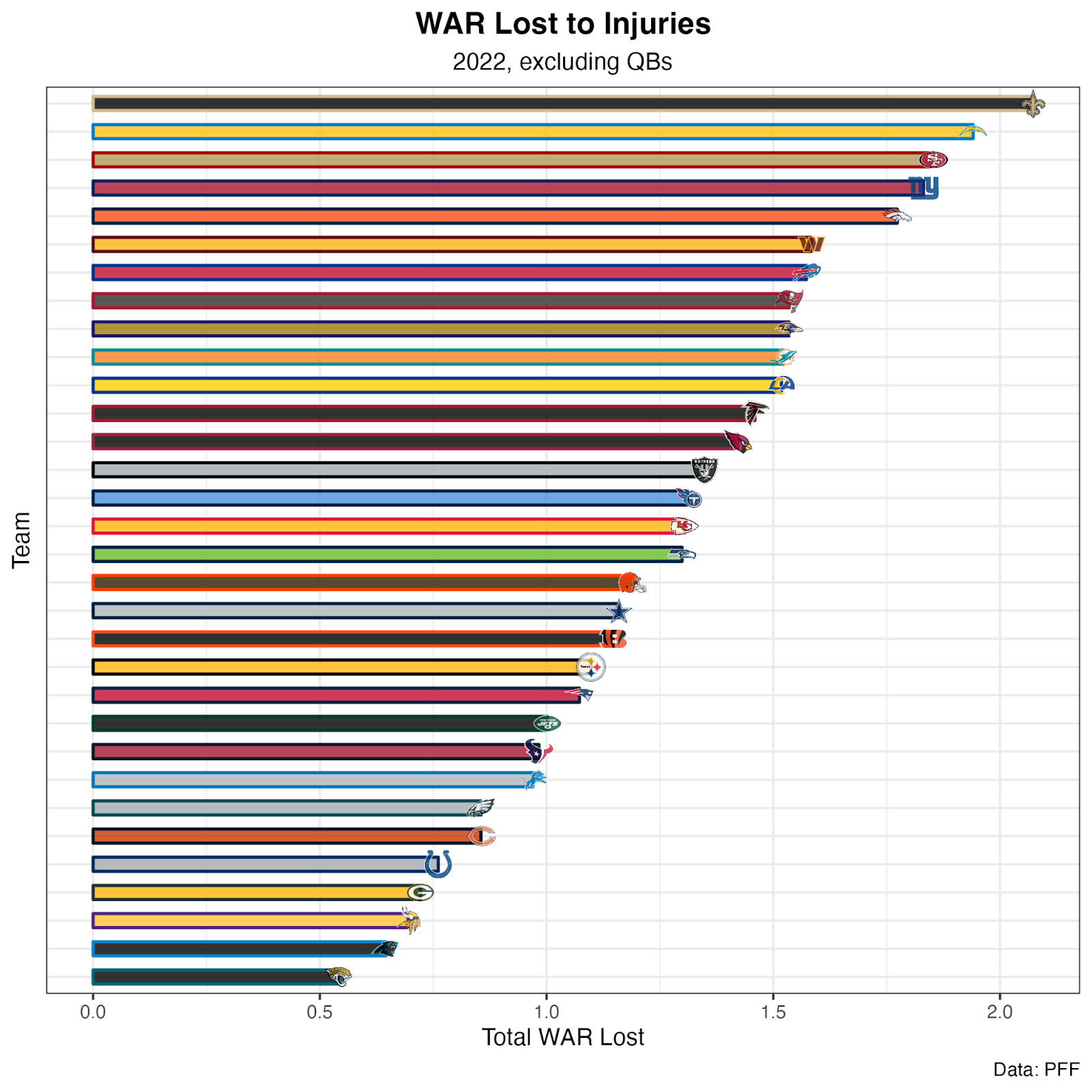 Saints felt it the hardest: The Saints lost the most WAR to injuries this season, losing their best receiver in Michael Thomas early in the season and later losing running back Mark Ingram II.

The Jaguars, on the other hand, suffered the fewest costly injuries. 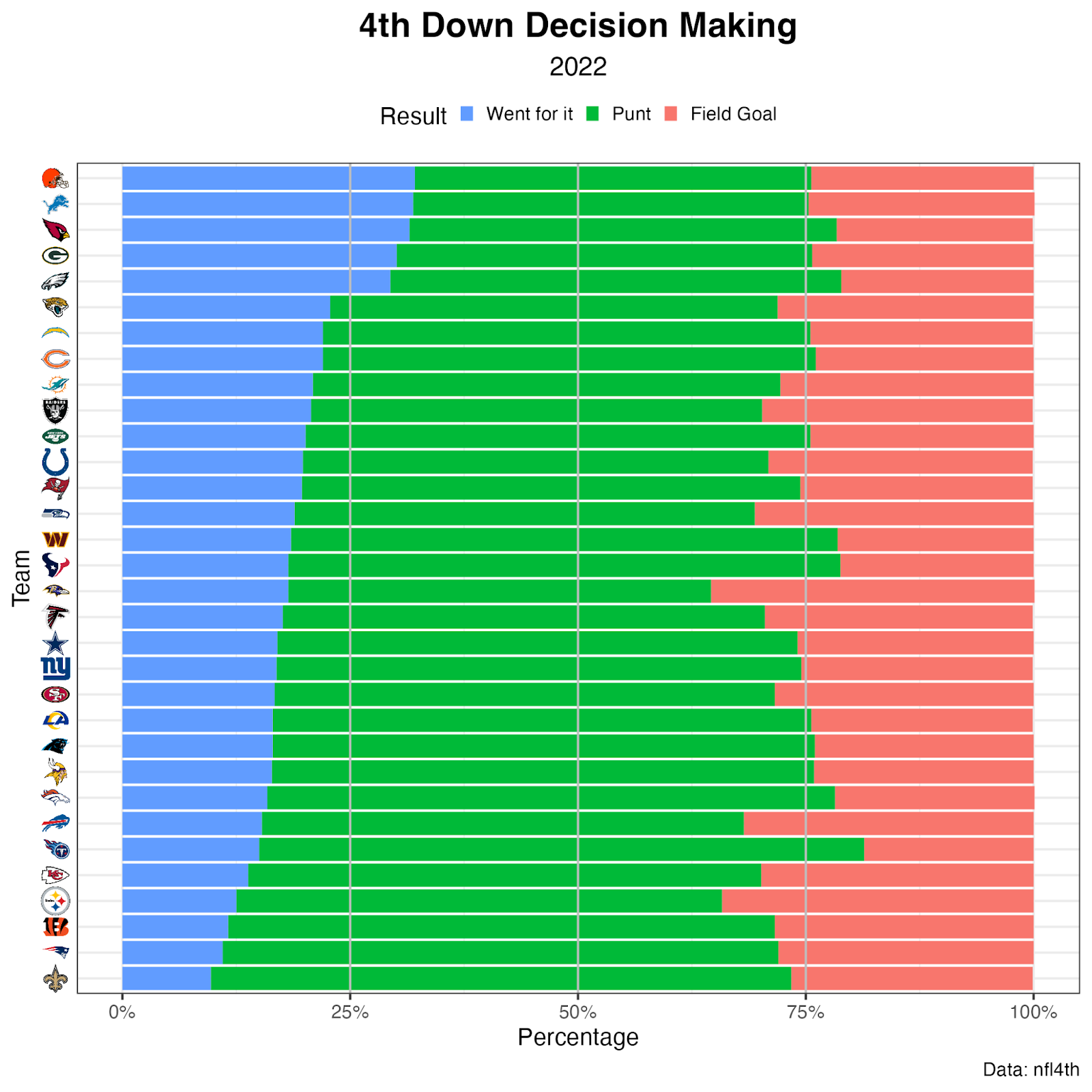 Lions keeping drives alive: The Lions were aggressive on fourth downs this season, converting 56.4% of their attempts to rank sixth among offenses. They finished 10th in the league in PFF grade on fourth downs (73.7).

No luck for Cleveland: The Browns led the league in fourth-down attempts but turned it over on downs on 10% of those drives, the third-highest rate in the league. They finished 14th in the league in PFF grade on fourth downs (70.0). 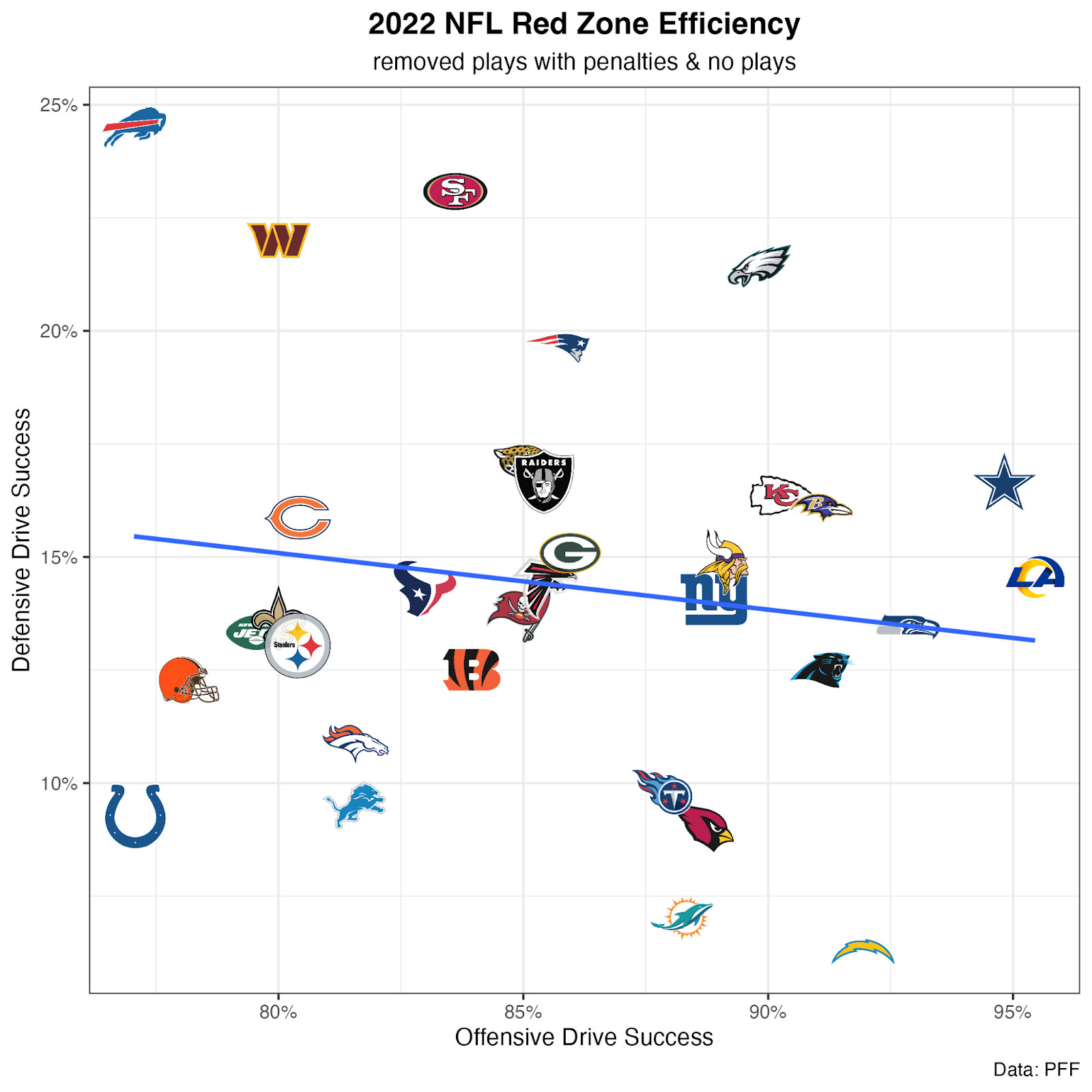 Top red-zone offenses: The Rams and Cowboys ended red-zone drives with a score at rates of 95.5% and 94.8%, respectively.

The Cowboys produced the best PFF grade in the red zone this season (77.0) and led the league in EPA per red-zone play (0.350).