Linsey: A healthy Dallas Cowboys offense will take the NFL by storm in 2021

Any lingering chance first-year Dallas Cowboys head coach Mike McCarthy had of making a good first impression dissipated as Dak Prescott sat on the turf of AT&T Stadium in their Week 5 matchup against the New York Giants, looking down at a fractured ankle that would end his season. It was the most significant injury that Dallas had to contend with, but it wasn’t the first or the last.

It would be one thing if Prescott’s injury was an isolated incident. The loss would have still stung, but Dallas had prepared for such a scenario by signing one of the league’s best backup quarterbacks, Andy Dalton, before the 2020 season. The problem is that a successful stint with Dalton as the starter was reliant on the impressive offensive ecosystem that the Cowboys had built around Prescott. That ecosystem crumbled before Dalton ever took the field. 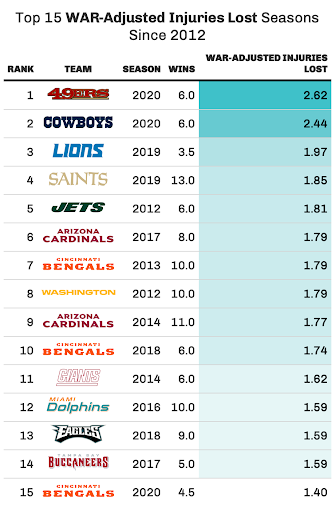 Dallas’ 2020 season was one of the most injury-impacted seasons of the past decade, as the work above from PFF’s Tej Seth and Ben Brown shows. The vast majority of that injury loss came on the offensive side of the ball, and the result was a Cowboys offense that finished the season ranked 23rd in expected points added (EPA) per play — a disappointing end to a year that began with so much promise.

Los Angeles Chargers fans may beg to differ, but injuries and the loss in production stemming from those injuries isn’t typically something that affects the same franchises year after year. The plot below, pulled from the same piece as the table above, shows no year-to-year stability for WAR-Adjusted Injuries Lost. 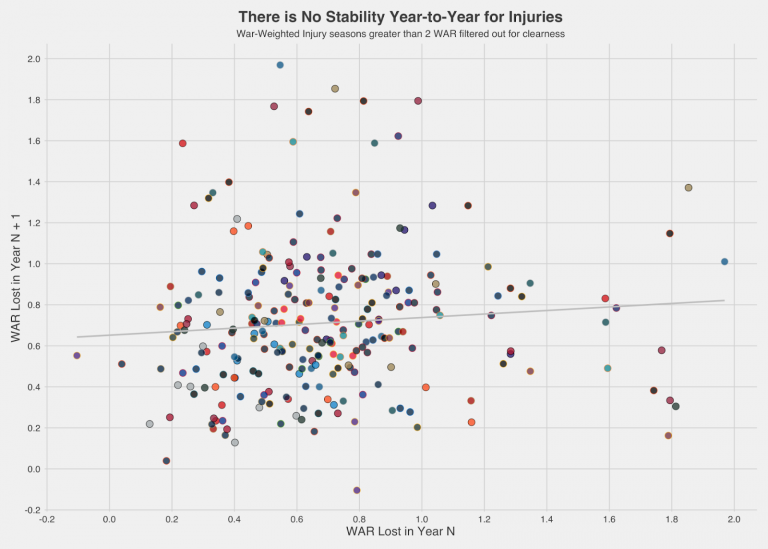 Better injury luck at quarterback and along the offensive line in 2021 will allow the Cowboys offense to chase last season’s lofty preseason expectations. It is well within Dallas’ range of outcomes to finish next year with the league’s most efficient offense. They finished the 2019 regular season ranked second in EPA per play on offense behind only the Baltimore Ravens, and the potential is there for the group to be even better in 2021.

That, of course, starts with a return to form from Prescott following his gruesome ankle injury. The fifth-year quarterback out of Mississippi State looked to be on the verge of the best season of his career prior to his injury in 2020 — his 85.2 PFF grade through the first five weeks was on pace to be a personal best, ranking seventh among all qualifying quarterbacks at the time.

PFF’s Seth Galina’s thoughts on what has made Prescott so impressive in the aftermath of his recently signed extension are worth resurfacing:

“Prescott plays the quarterback position with an intelligence level that continues to outpace his number of years in the NFL. We saw that play out statistically in his passer rating when kept clean in 2020 before injury. His 117.2 mark was well above the league's 103.7 average.

Prescott is always sniffing out defensive pressures to give himself as much time in the pocket as possible, therefore ensuring he doesn’t get rid of the ball before he needs to. This leads to his unique coolness at the position. Nothing fazes him. His smooth pocket movement and shifty behavior outside the pocket perfectly complement the fluttery touch he shows when throwing all over the field.

He is also a brilliant reader of defenses, although he probably needs to take more chances down the field. Prescott’s average depth of target ranks only 25th among all quarterbacks with at least 500 dropbacks since 2016 — his rookie season. This is the big area where he can still grow. He also needs to feel a little more confident pulling the trigger on tighter windows deep downfield.”