The San Francisco 49ers traded for star running back Christian McCaffrey on Thursday night, setting the stage for one of the most interesting stories of the 2022 NFL season.

The 49ers backfield under head coach Kyle Shanahan has long been the bane of fantasy managers. Trying to predict which player will generate the production each season has been almost impossible, but it has also been a gamble people take because Shanahan’s system is almost guaranteed to produce rushing success.

Since he arrived in San Francisco, 49ers backs have averaged 4.5 yards per carry as a group, and they have averaged a massive 1.7 yards before contact per attempt. Shanahan’s system, like that of his father, can seemingly create production from any back, but trying to identify “this year’s” Elijah Mitchell, Matt Breida, Raheem Mostert or Jeff Wilson Jr. can be a trial. 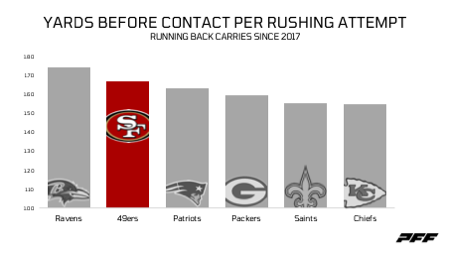 Trading for Christian McCaffrey should simplify that decision-making, but it also represents something far more interesting. Why would Kyle Shanahan — the man whose system repeatedly proves investment in running backs can be a waste — keep investing significant capital in the position?

It’s unlikely to have escaped his notice that he can create production out of an endless stream of low-round draft picks or undrafted free agents. Clearly, Shanahan believes that an elite talent can act as a force multiplier on the offense and dramatically exceed the benefit of simply “good” rushing production.

McCaffrey also brings a very rare skill set in the passing game and can further add to Shanahan’s bag of schematic tricks. To go with his 628 carries, the sixth-year back saw 369 targets in his first three seasons before injuries started to disrupt his career. He has spent over 500 career snaps lined up in the slot or out at wide receiver and has a true slot receiver skill set.

With those two in the huddle, defenses could be looking at 21 personnel, 11 personnel or a zero-back look and have no way of telling which before they line up.

The cost is significant and difficult to ignore, but let’s not lose sight of what this allows Shanahan to potentially create if McCaffrey can stay healthy — because it’s potentially special.