Can the Cowboys, Eagles win the Super Bowl?

The race for the NFC East crown is threatening to become the punchline to a particularly bad joke this season. The possibility of a below-.500 team taking the title is still alive (though it's now highly unlikely, as it requires a tie), and the focus is on which one of the potential winners will stagger over the finish line first. The Dallas Cowboys and Philadelphia Eagles have both badly underachieved this season, but should they be written off that easily?

On the past two occasions a team with a losing record won its division, that team also won its ensuing home playoff game. People have used this scenario in the past as a way to try and push for reseeding the playoffs. But for now, a more relevant point is this: whichever of these two teams makes it into the postseason won't necessarily be an easy out.

Home field advantage is an important factor in any eventual playoff game, but the broader point is that these are two talented teams with the potential to put it all together in any given week, particularly in a do-or-die scenario. Both squads have struggled to piece together good performances from week to week, but neither has had a complete absence of those efforts. The Eagles have wins against the Green Bay Packers and Buffalo Bills — two playoff-bound teams — while Dallas is fresh off annihilating the Rams and has played the New Orleans Saints, Minnesota Vikings and New England Patriots close this year.

Though a postseason run would be improbable, one of these teams will be just four wins away from a Lombardi Trophy. So let’s look how each could do it.

Dallas is the higher-ranked team in PFF’s ELO power rankings and is in significantly better shape right now when it comes to key injuries and general outlook. The Eagles are still stumbling forward, while Dallas enters the showdown with some momentum having been so dominant against the Rams this past week.

By almost any measure, the Cowboys have actually had an effective and efficient offense this season, even if it has been plagued with inconsistencies. Dallas ranks behind only Baltimore in expected points added (EPA) per play, averages more yards per play than any other offense and is one of just two teams to exceed 300 total first downs on the year. 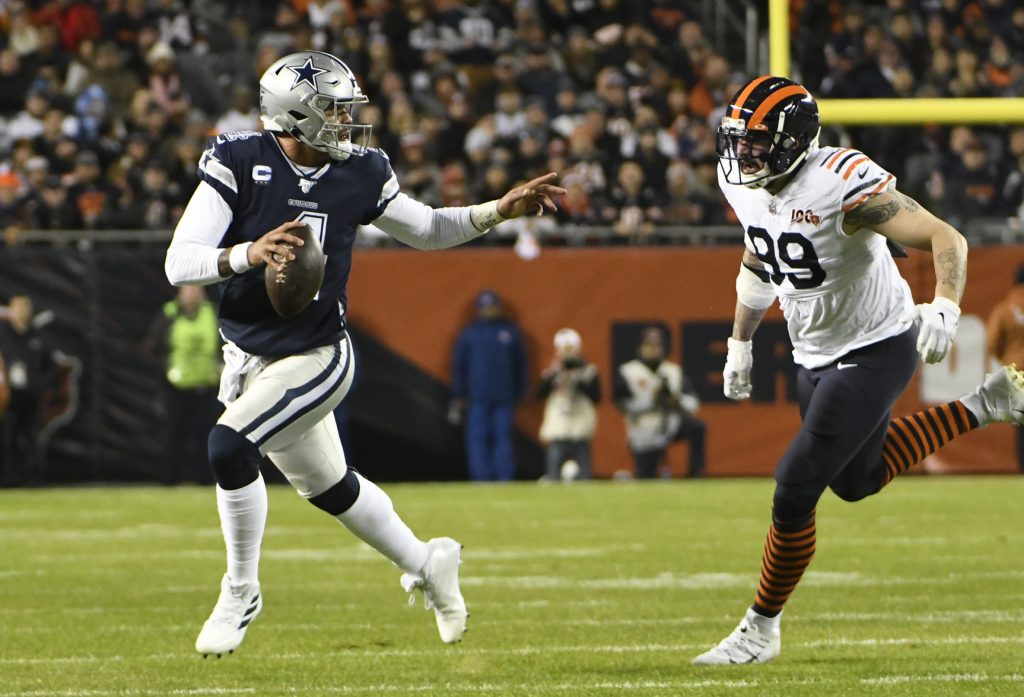 Dak Prescott may be coming into the game banged up, but he has been at the helm of a formidable unit this season, consistently playing at or around his best all year. Prescott has just three games this season that have dipped into ‘average’ grading, with every other performance earning a grade somewhere between 60.0 and 93.0.

Last week's performance showed the potential of the Cowboys' ground game, too. With the talent on the offensive line, both Ezekiel Elliott and Tony Pollard are more than capable of having big-time production, and both went over 100 rushing yards against the Rams. The backfield duo is averaging 3.6 yards per carry after contact, so when the line in front of them has a good game, that ground attack is virtually unstoppable. 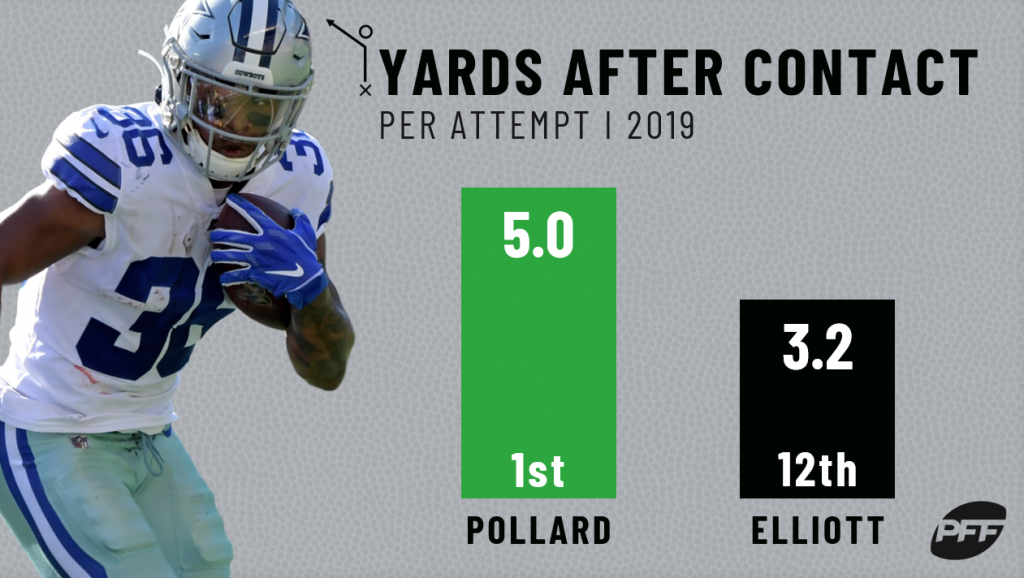 The team’s defense has been more of a letdown this season, but the talent to have impressive performances still remains. Many of the star performers from a season ago haven’t been able to back up that level of play in 2019. As a team, though, Dallas still ranks top 10 in yards per play allowed and has been able to slow down several potent offenses this season.

As much as the cliché goes that defense wins championships, offense has never been more important to a team’s prospects than it is right now, and Dallas is strong in the right areas this season.

The Eagles may be the more interesting case because, on the surface, things are in significantly worse shape than they are in Dallas. Despite that, the Eagles control their own destiny. If they are able to beat Dallas at home this week and match or better the Cowboys’ result in the final game of the regular season, the Eagles will host a playoff game.

Still, this team's list of problems is extensive. The Eagles literally ran out of wide receivers on the roster a week or so ago, and though things are a little less desperate there now, it is still a significant hole in personnel with Alshon Jeffery now out for the year. They rank in the bottom 10 as a team in PFF coverage grade (56.0) and have been getting regularly gashed through the air by even mediocre teams.

Carson Wentz seems to deliver at least one spectacular pass every week, but since Week 7, he has been the 32nd ranked quarterback in overall PFF grade, with a mark of just 58.6. 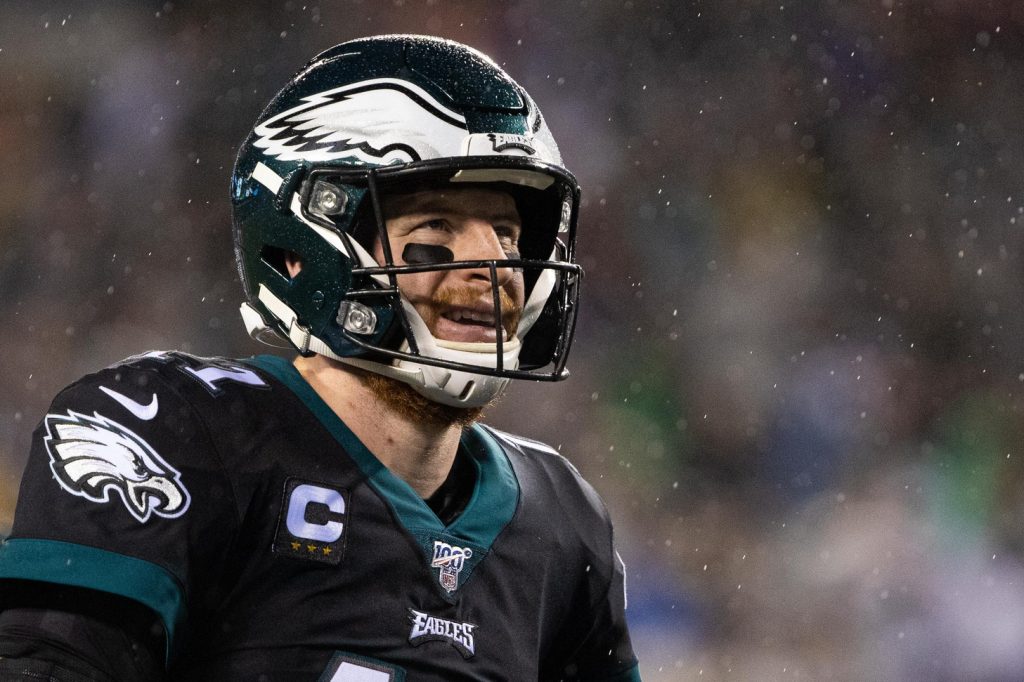 What the Eagles have in their favor are some interesting tendencies that can overcome a lot of marginal play. They play the percentages very well from an analytical playcalling point of view. Only the Atlanta Falcons have more two-point attempts than the Eagles this year. Philadelphia has attempted fourth-down conversions at a top-10 rate — with only three fewer attempts than the most in the NFL — and though the team's conversion rate hasn’t been great, the sheer fact they are willing to be aggressive pays dividends in the long-term.

In a one-off game, the Eagles also have confidence in kicker Jake Elliott, who can strike from long range. He has a 61-yard walk-off game-winner to his name and holds the franchise record for most attempts from 50-plus yards in a season. If the game comes down to a small margin, the Eagles have multiple options in terms of strategy.

Philadelphia can also paper over some of the cracks on defense with aggression on that side of the ball. The Eagles have seven different defenders to have recorded double-digit pressures on the season, and five have more than 20. Only the Pittsburgh Steelers have a higher pressure rate this season than the Eagles (40.4%), which automatically gives them a higher chance of forcing an ill-advised pass or creating a turnover off a fumble. 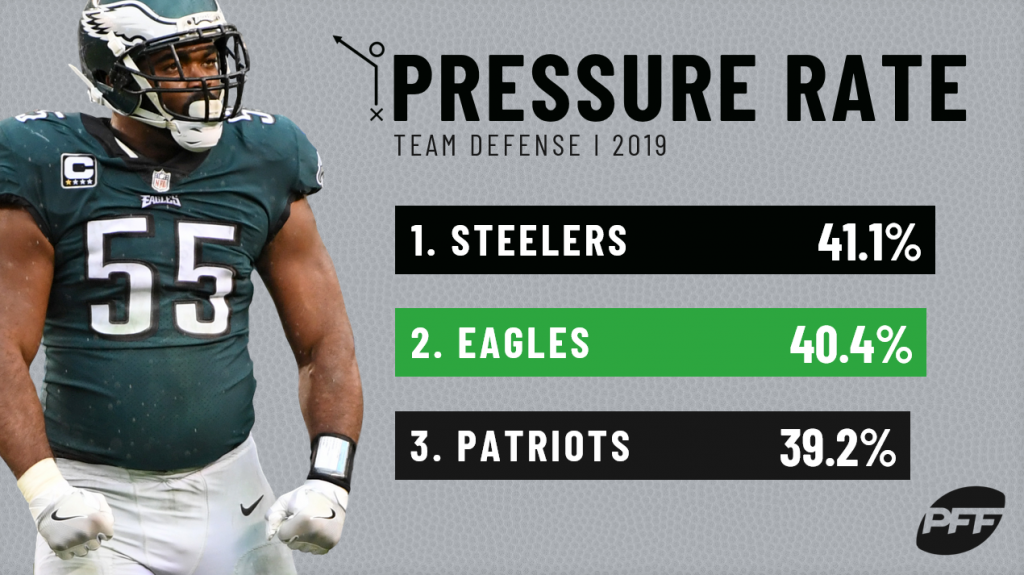 The Eagles’ fortunes will likely be determined by their quarterback, Carson Wentz. There are few more mercurial passers in football, but throughout his career, he has always been more successful on the lower-percentage, harder-to-replicate things than he has been on the routine plays. That is still the case this season to an extent, but it could be even more so. He has 12 touchdown passes and just one interception on third and fourth downs, but he has also dealt with 15 dropped passes, six more than any other quarterback. It would be hard to bank on Wentz leading Philadelphia to the promised land the way his then-backup Nick Foles once did. But the point is, he’s capable of that level of play, particularly in a small sample size, which makes the Eagles an extremely dangerous playoff team to have to beat in their own stadium.

As much as the battle to take the NFC East title is starting to look like a very slow bicycle race between unfit recreational cyclists, it’s important to understand that one of these teams is going to host a playoff game. And either one of them is perfectly capable of the kind of performance needed to upset their visitor and advance.