• Broncos and Colts both beset by RB injuries, but potential absence of Jonathan Taylor would be more impactful, adding the hook early in the week to Denver -3.5

• Any positive Prescott news should push the line further in Cowboys' direction, but the idea of a Rams rebound could halt any further movement. Expect a -4.5 close, with the total moving lower than opening 45.5.

Let’s start by checking where the current Week 5 spreads were at critical points in the past.

Another valuable datapoint often is the injury situation for all teams. One of the best ways to find value early in the week is digesting injury information quicker and more accurately than the rest of the market. This can be done by understanding which key guys are returning, as well as who was injured in the previous game but won't be added to the official game status for a team until later in the week.

To start, let's take a look at the Week 4 injury information for every team and what that means for their outlook heading into Week 5. 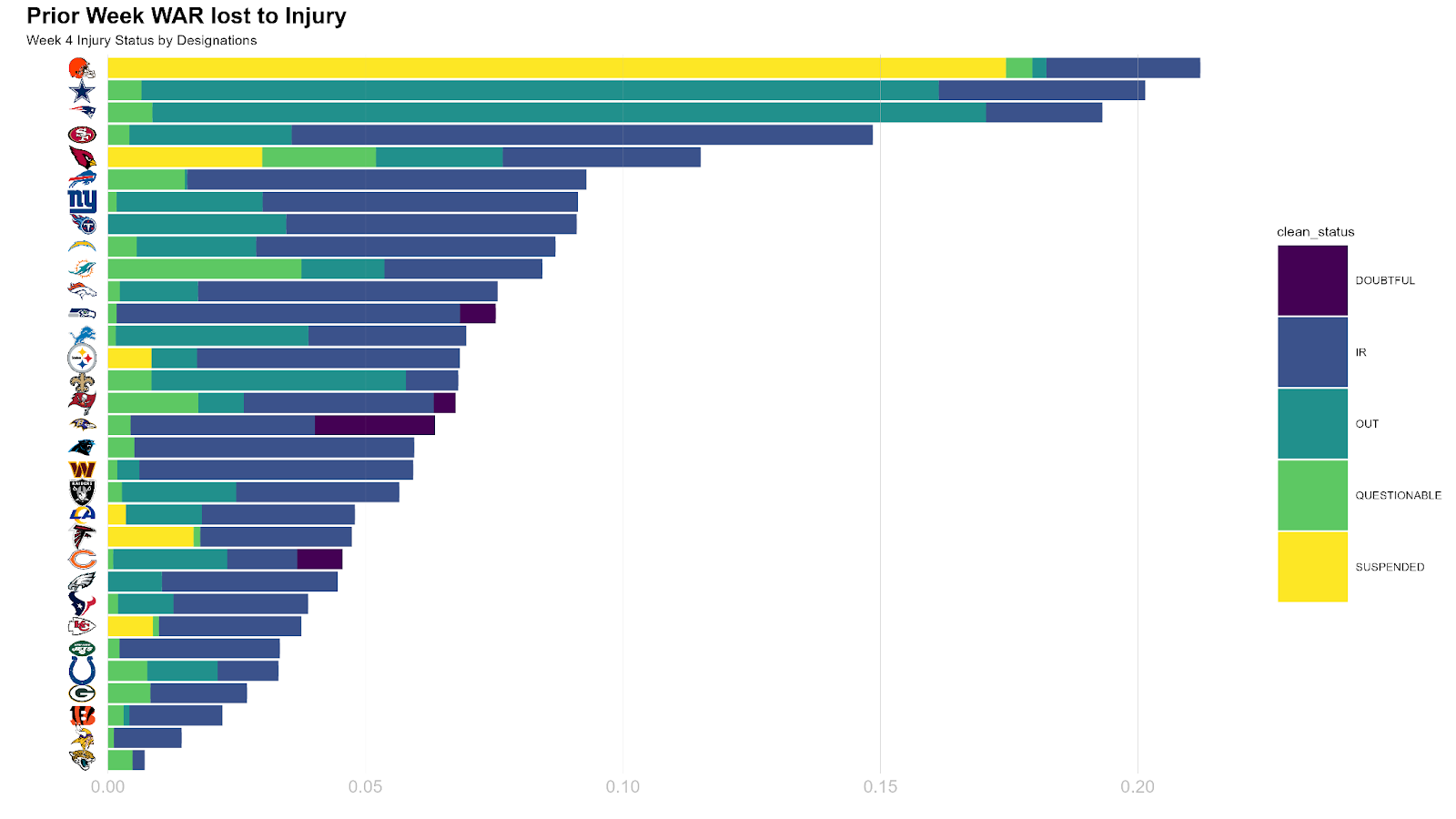 We'll also look at some developing injury situations from Sunday and Monday that are relevant from a health perspective and could impact the spread of games if players are out or hampered for the upcoming week.

• Broncos RB Javonte Williams suffered a season-ending knee injury on Sunday, forcing the Broncos to turn to Melvin Gordon and Mike Boone. Indianapolis also has its own concerns with star RB Jonathan Taylor, a non-participant in practice on Monday because of an ankle injury and seemingly very questionable headed toward Thursday’s kickoff.

• Taylor seems to be more impactful for a Colts team that’s been really poor offensively to start the season, with the early-week line movement adding the hook to -3. It seems like we might bounce between -3 and -3.5 throughout the week and are only moving based on perceived sharp money entering the market. PFF Greenline finds no value on the spread or moneyline, but the injury concerns are worth monitoring from the total’s perspective.

• These two teams could not be heading in more opposite directions coming out of Week 4. Although Carolina piles on disappointments every single week, San Francisco finally got its offense rolling a bit Monday night and already has the NFL's best defense through the first four weeks.

• The spread already crossed +3 on the lookahead and now pushed out two more points from that number to an opening +5. Further movement is expected once the market fully digests how dominant the 49ers were in easily defeating the Los Angeles Rams on “Monday Night Football”. This spread should easily challenge +6 by the time kickoff comes on Sunday.

• Atlanta has captured the early love from the betting market, after being the only undefeated team against the spread through four weeks. This spread continues to move in the Falcons' direction — and now enters prime teaser territory on the Buccaneers' side.

• The question becomes whether Bucs QB Tom Brady’s brief injury scare on “Sunday Night Football” would cause any panic from the betting market if he were to receive a questionable status later in the week. He didn’t miss any snaps and looked for the most part to be comfortable in the pocket, despite the game continuing to slip out of his grasp. It wouldn’t be surprising to see this spread slip further down to -7.5, but any further movement would require a drastic change in the injury outlook for a Buccaneers team that is finally starting to get healthy.

• This spread could see drastic line movement with these teams also seemingly heading in opposite directions. Everyone (myself included) buried the Cowboys after an uninspiring Week 1 performance in which they lost QB Dak Prescott to a multi-week thumb injury. Fortunately, Cooper Rush might be the greatest backup quarterback in league history and responded with a 3-0 stretch that kept the Cowboys comfortably on pace with the Philadelphia Eagles.

• The Rams appear to be the latest defending champ cursed with a Super Bowl hangover and haven’t looked good offensively outside of targets to Cooper Kupp through the first four games of the season.

• After bouncing around on the Prescott injury news on the lookahead, the spread is now moving closer to the preseason number. Any positive Prescott news should push this further in the Cowboys' direction, but the idea that this is a bounce-back spot for the Rams could halt any further line movement. Expect a close at -4.5, with the total also moving lower than the opening 45.5.

• The Game of the Week already has seen some reasonable line movement for the Cincinnati Bengals and seems locked into a -3 differential. Two key non-QB injury situations to monitor are the status of LT Ronnie Staley for the Ravens and Tee Higgins for the Bengals. Cincinnati's offense broke down without Higgins on the field earlier this season and needs the 1B receiving option for Ja’Marr Chase to break out of his sophomore slump.

• Baltimore’s been poor defensively, and if ER Justin Houston ends up on the wrong side of questionable, the Ravens could struggle to generate enough pressure to slow this Bengals offense. Cincinnati should once again be the healthier team on the field — and that might be the reason why this spread could eventually drop to -2.5.