Breaking down the Bear front and its effectiveness in the NFL

The NFL today majors in zone runs. Seventy-five percent of the league calls zone run concepts — inside or outside zone — over half the time when running on early downs outside of their own red zone and the opponent’s red zone.

The three teams with head coaches from Sean McVay’s coaching tree (the Los Angeles Rams with McVay himself, the Green Bay Packers with Matt LaFleur and the Cincinnati Bengals with Zac Taylor), which is famous for a reliance on outside zone, look poised to make the playoffs. 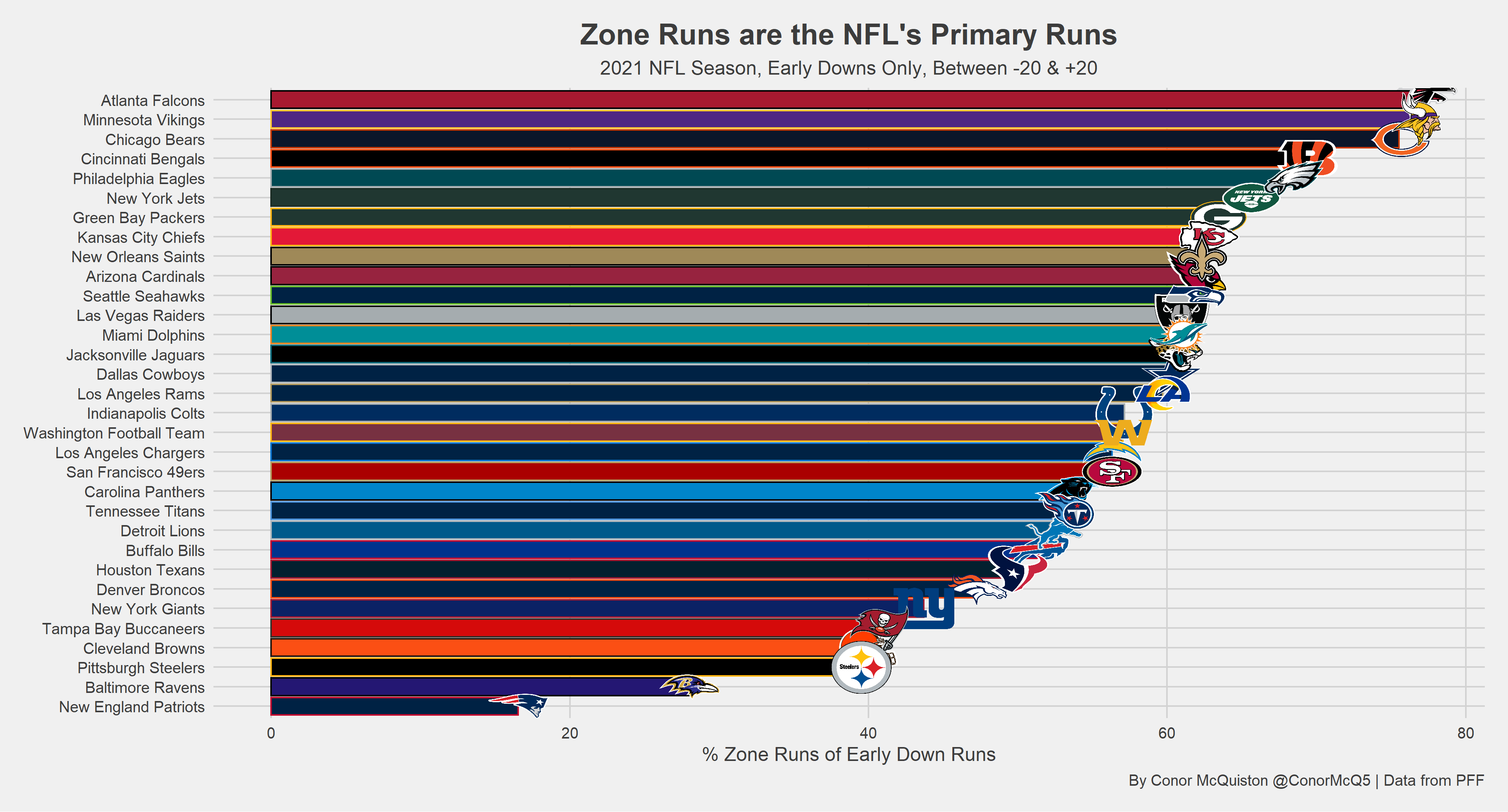 NFL defenses are thus presented with a clear problem: How does one go about stopping zone runs? As observed by PFF’s Seth Galina and Diante Lee on the excellent Two High Podcast, one in-vogue solution for defenses is to implement more Bear fronts. 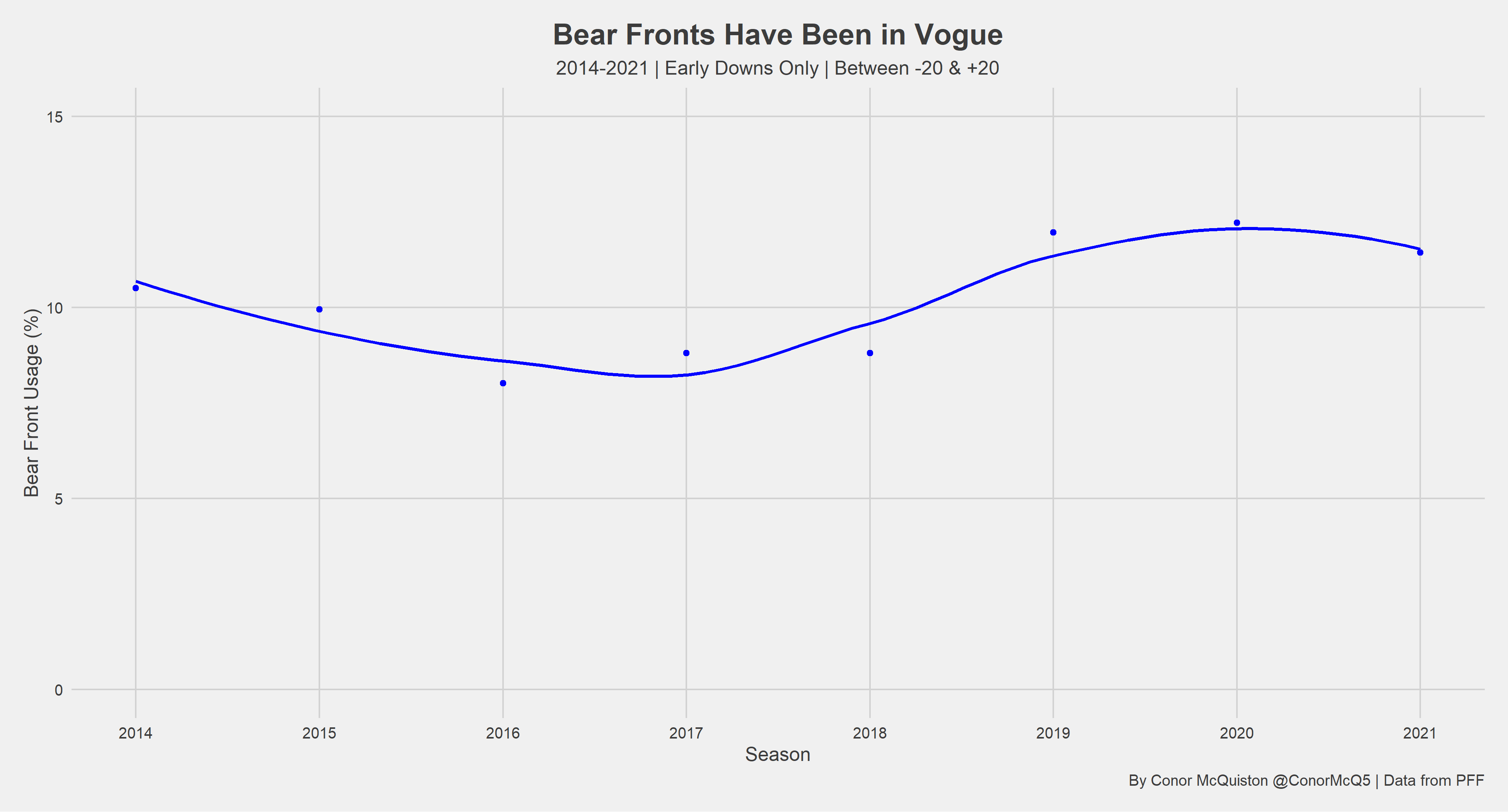 After a dip in usage between the 2016-2018 seasons, Bear fronts have made a resurgence, being called on roughly 12% of early-down snaps between the 20-yard lines over the past three seasons. The idea behind the Bear front, named after the famous ‘85 Chicago Bears 46 defense, is to put many big bodies in the center of the defensive line.

For zone runs, specifically, this prevents the offensive line from getting double teams and thus being able to climb to the second level. The theory is this allows linebackers to run free and create better results against zone runs. Canonically, a Bear front is done with two defensive tackles as three-techniques (outside shoulder of the guard) and one as a zero-technique (nose tackle). This is also known as a 3-0-3 alignment.

Here, we'll investigate this central claim — that Bear fronts better defend zone runs — and determine what other strengths and weaknesses are associated with the defensive alignment.

For this purpose, we will be expanding the definition of a Bear front from a 3-0-3 to generally having three defensive linemen between the inside shoulders of the offensive tackles. This will hopefully capture the minutia of slight variations in defensive play calls and alignments that all reach the same end: having three big bodies in the center of the defensive line. Explicitly, this will be snaps in which the defense has three down linemen between, and including, either 4i player. For the nerds, a visual aid has been provided.

Does the Bear Front Work? 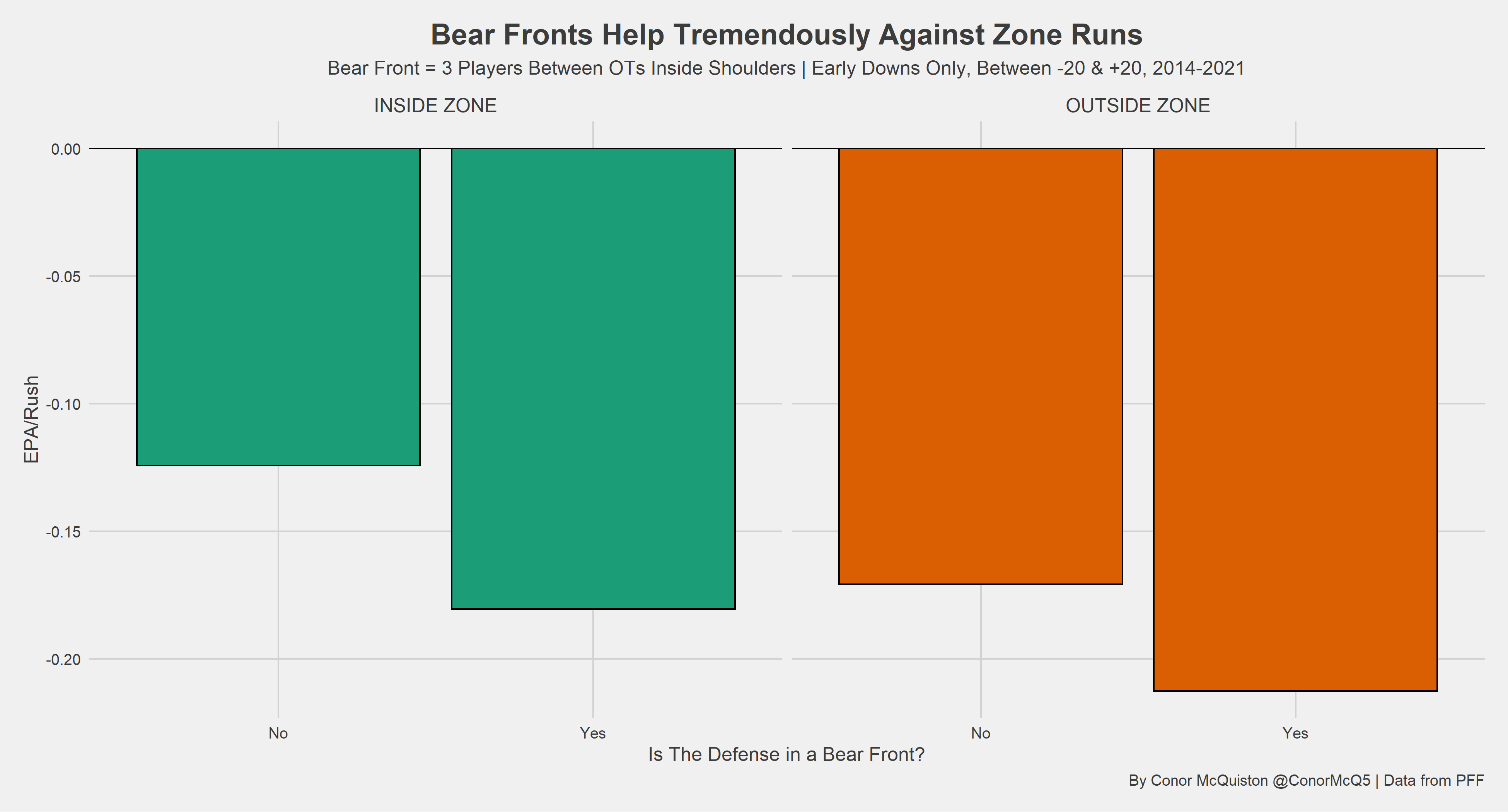 From a cursory view, it does work. Bear fronts have accomplished what they are designed to do on the tin in modern football. On early downs inside the 20-yard lines, offenses that run a zone run against a Bear front perform worse by roughly 0.05 expected points added (EPA) per attempt than when running against different fronts.

This doesn’t nearly pass the bar for a full statistical verification and estimation of the causal effect of bear fronts on zone runs. However, this evidence — along with the presence of a physical, schematic explanation of the phenomena — creates a strong argument for there being some causal relationship between the two. So we’ll say yes, Bear fronts are effective at stopping zone runs.

Aside from the benefit of stopping zone runs, we can also expect Bear fronts to schematically provide some benefits against play action off zone action for much the same reason. Bear fronts allow the linebackers to keep their noses clean, which allows them to better robot and get back to their landmarks following the play fake.

Analytically, if this was the case, it would be a massive boon considering the massive amounts of evidence pointing to the overall effectiveness of play-action passes on early downs. So, anything to mitigate their effectiveness would be tremendous. 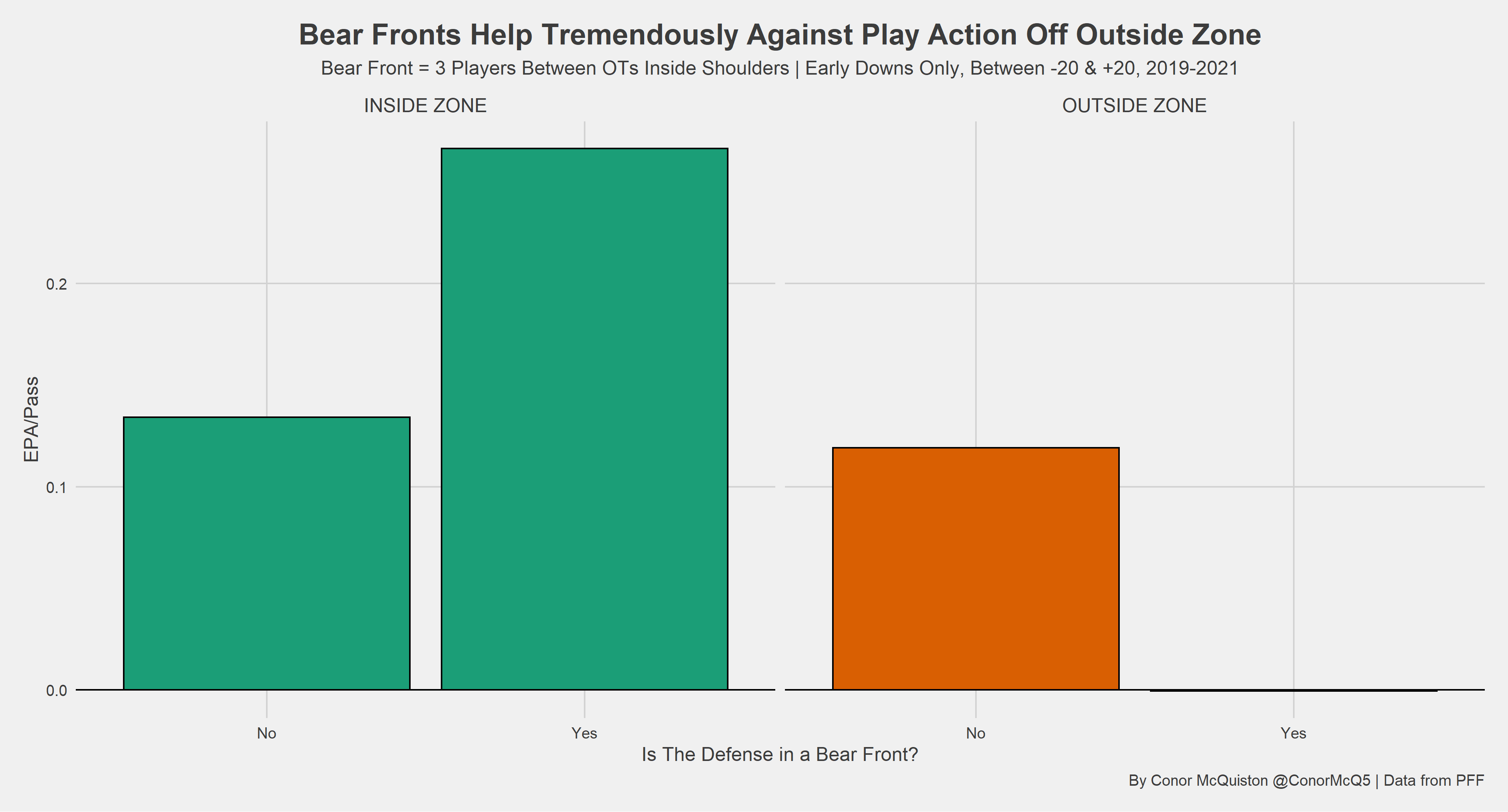 The most reasonable explanation that comes to mind is that the types of pass concepts called off each action being better or worse against the coverages behind bear fronts is an immense confounding factor rather than the front itself.

It is worth mentioning that one of the anticipated schematic issues of a Bear front is that it will be weak against gap runs, such as power and counter. The motivation behind this is that the down blocking offensive line has a better angle on the defensive linemen, thus causing better aggregate play results. 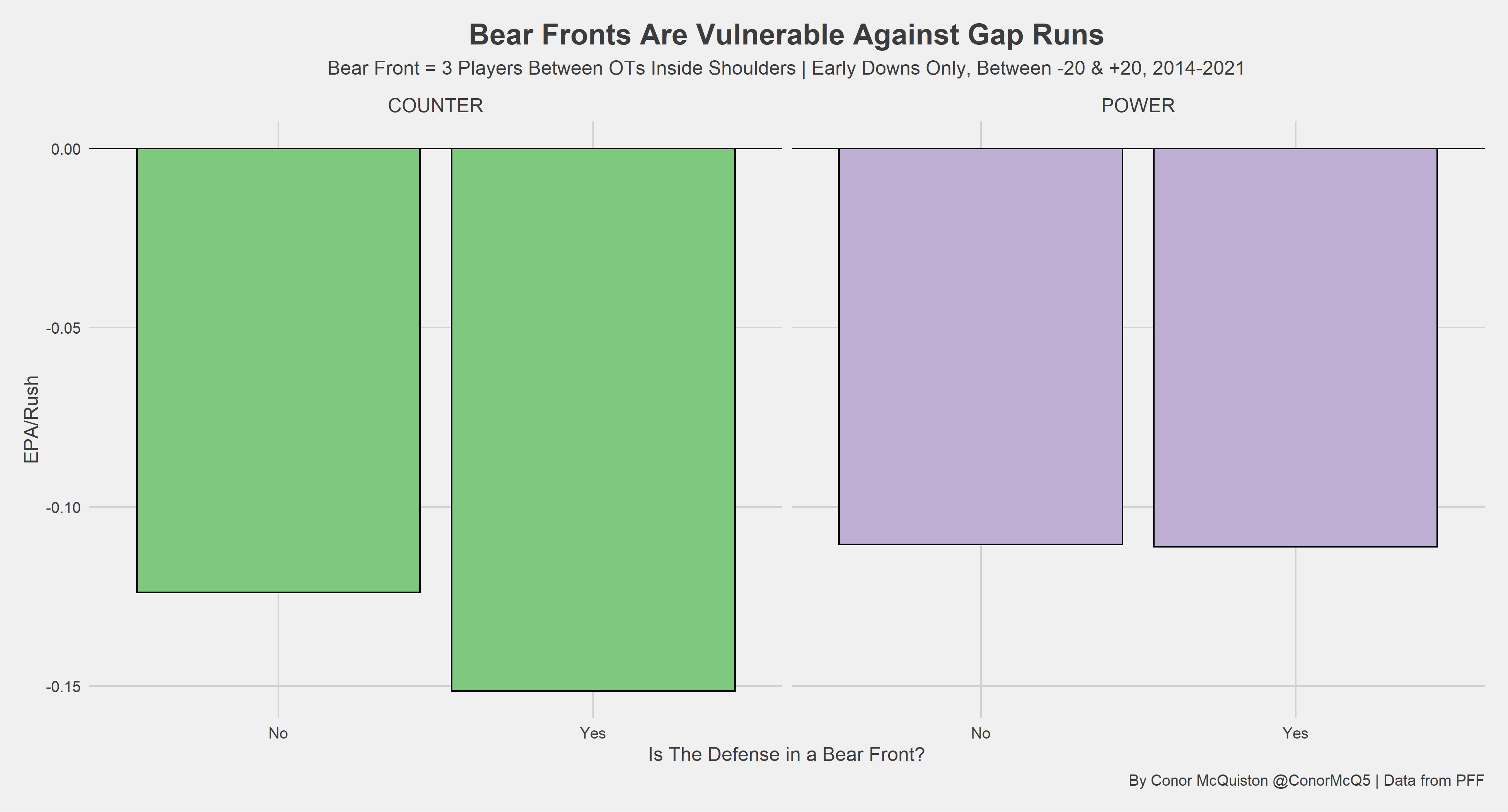 This expectation is only somewhat confirmed. Against power runs, there is functionally no difference between running against Bear fronts and running against other fronts. Bear fronts tend to have heavier box counts — more on that later — and thus we expect them to perform better against most runs.

So, a result where outcomes are the same is a weak point in the prior confirmation favor. The results of counter runs work opposite to our expectations, and this is perhaps the result of Bear fronts being in a better position to exploit potential issues with multiple offensive linemen — or it may just be noise. Either way, this is at best inconclusive evidence of a causal relationship between Bear fronts and worse outcomes when defending gap runs.

What is Associated with Bear Fronts?

With this in mind for Bear fronts, the defense still needs defenders dedicated to protecting the edges lest the offense is able to get around them. Additionally, the defense still typically needs two linebackers on the field to assure that the unit has advantageous numbers in the hole the running back chooses. Both of these paradigms lead to naturally higher box counts for Bear fronts: 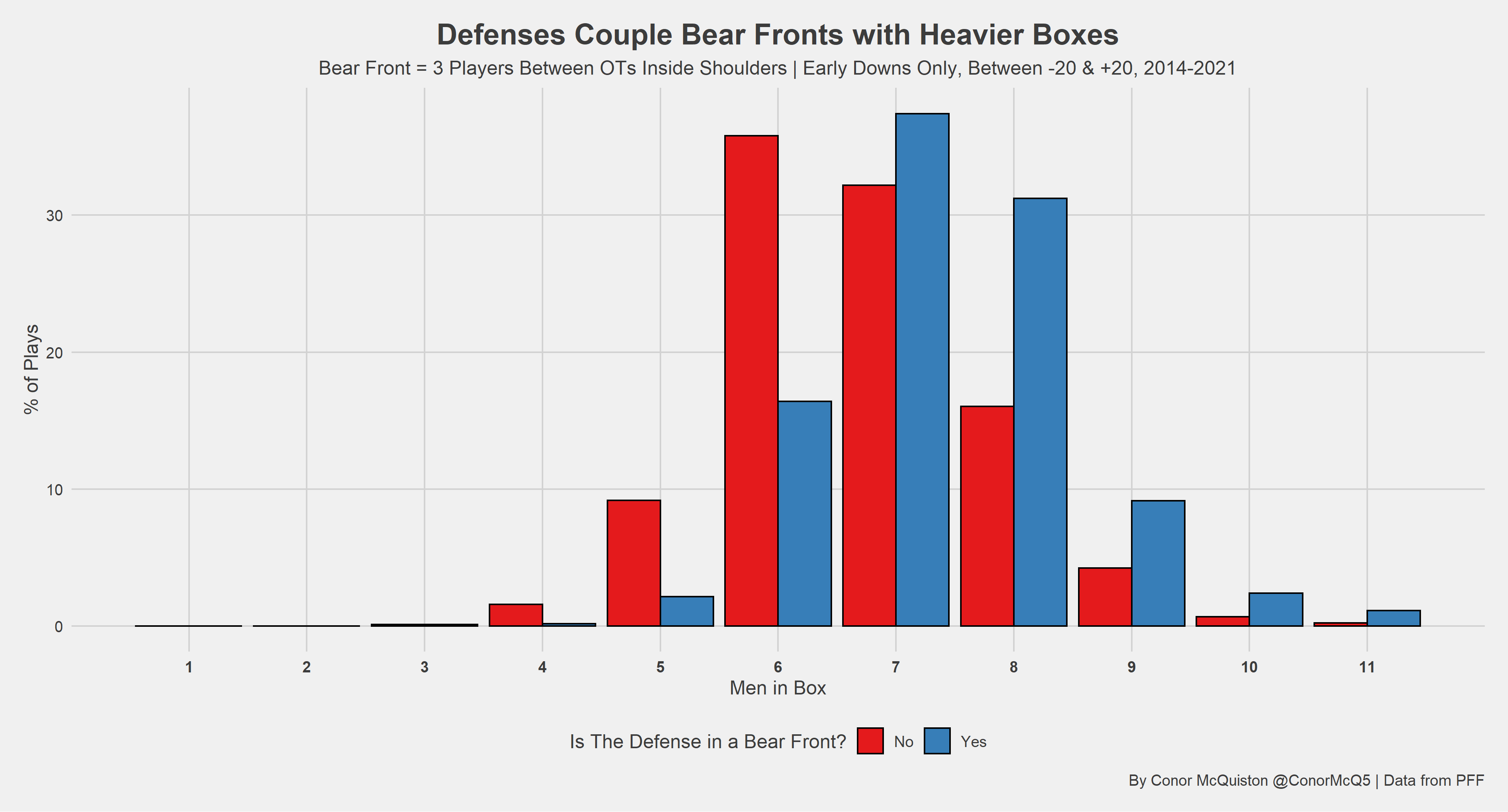 The coaching adage “the coverage dictates the front” — which likely originates from Sun Tzu in the Art of War — means that the coverage on a given play limits what fronts can accompany it as a result of their overall structure. As an example, if a defense wants to run traditional Cover 2, it cannot employ a front where a safety lines up on the line of scrimmage since they will never be able to get to their landmark in the deep half of the field. With this in mind, what coverages allow defenses to run Bear fronts? 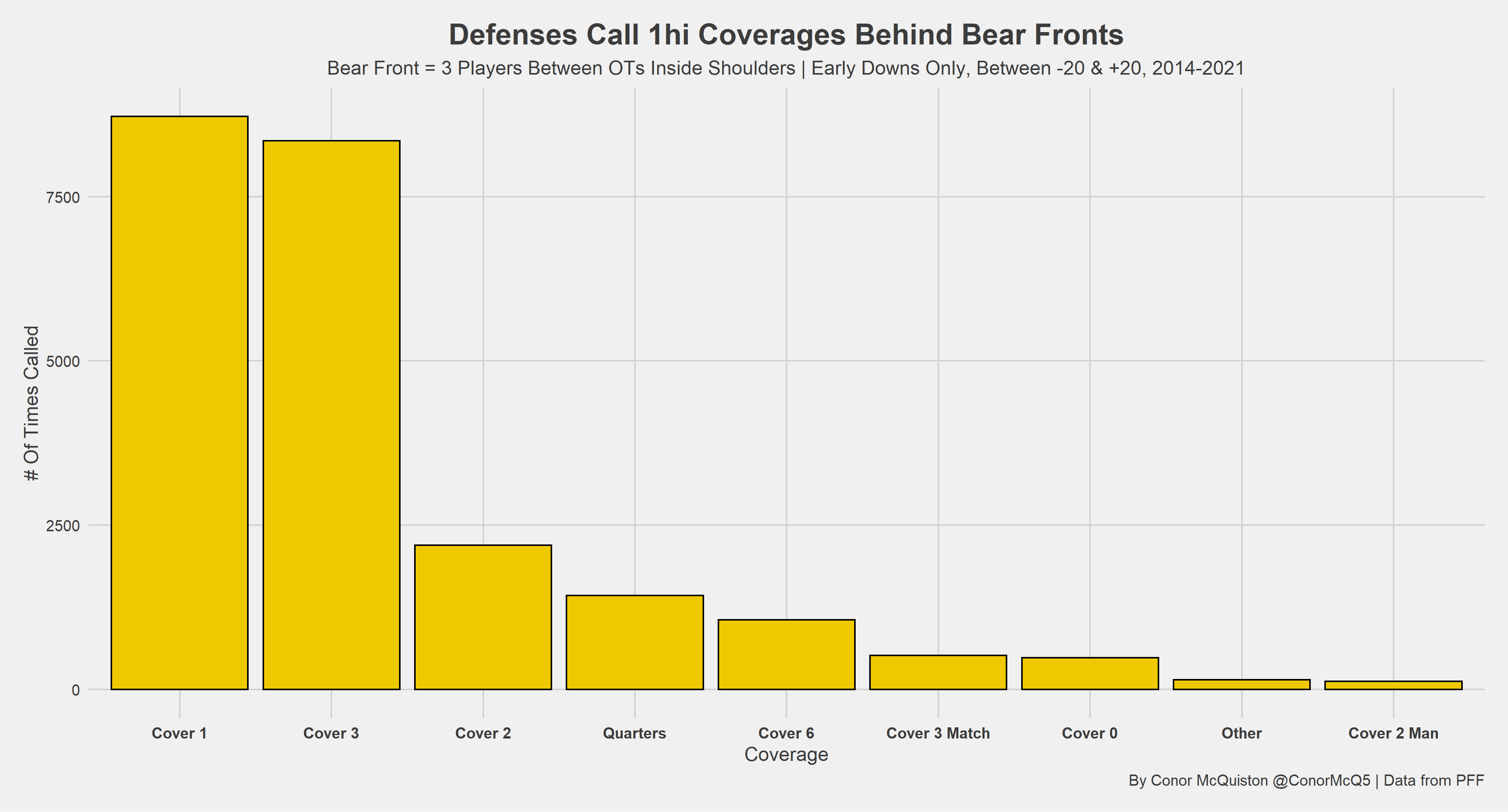 If you correctly answered one-high coverages, you get to have extra leftover Halloween candy tonight. The one-high coverages — Cover 1 and Cover 3 — allow defenses to bring an extra defender down into the box, making them natural choices to accompany Bear fronts. This does, of course, have its drawbacks.

We have evidence that higher box counts lead to worse outcomes in the passing game for defenses. And for Bear fronts specifically, their condensed nature can make it difficult for linebackers to reach their landmarks in Cover 3. If the defense is running Cover 1, it can also put linebackers/dropping edge players in difficult angles to defend personnel mismatches. These facts do lead to an overall worse performance against the pass. 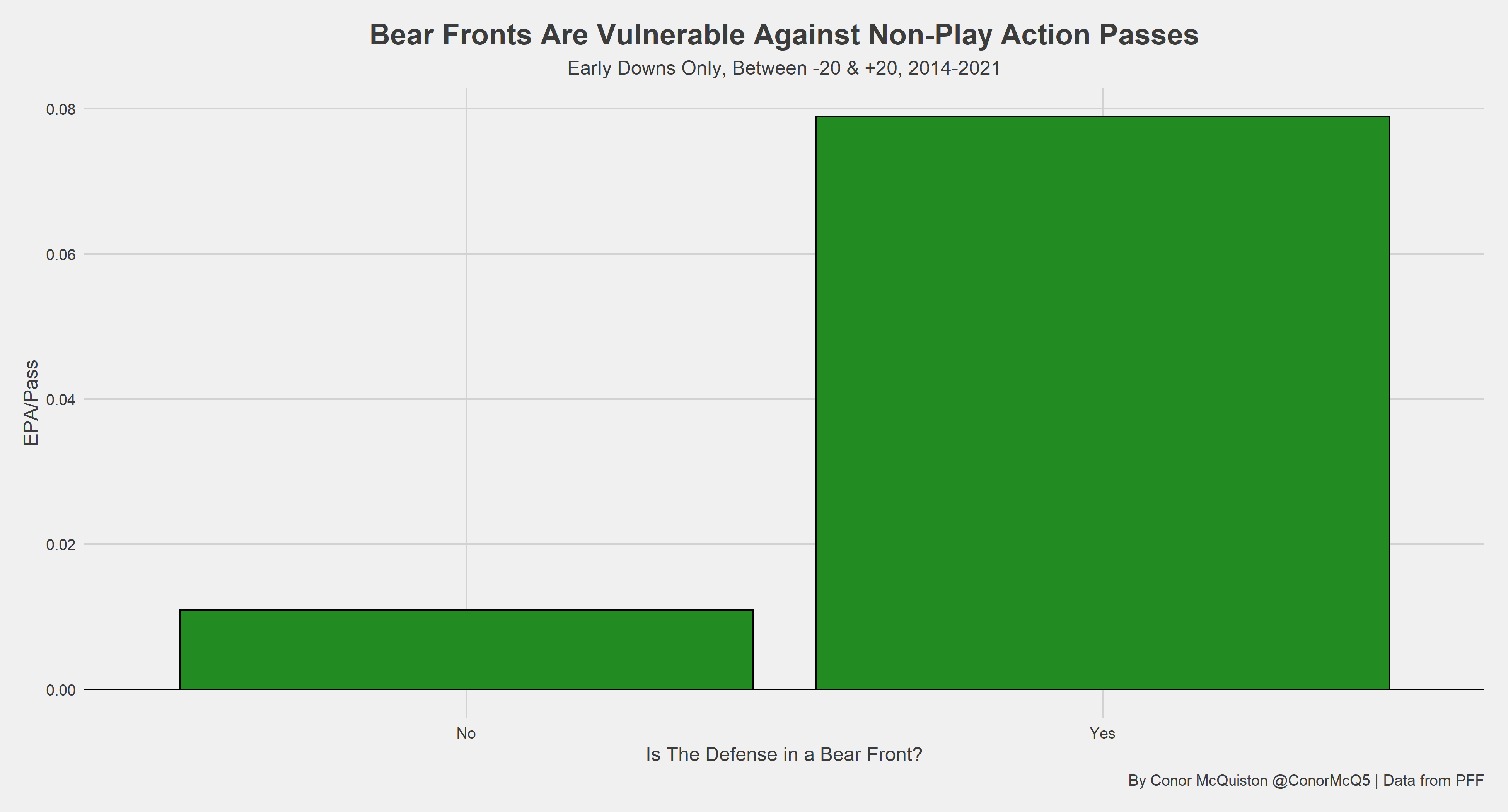 The difference in the ability to defend the pass is staggering — one by a factor of eight — but it would be rudimentary to attribute all of this to Bear fronts. Based on the natural schematic implications, we can say some of it certainly is, but this is heavily dependent on the personnel of either team in a given situation, as well as the specific pass concept called.

Some pass concepts work better against Cover3 or Cover 1 in the first place, and they get worse with the additional impedances of a Bear front. But these disadvantages can be neutralized if a team happens to have Bobby Wagner on its roster.

So, we can say that Bear fronts likely perform worse against the pass than other fronts, but exactly how much worse it is depends on many external factors.