PHILADELPHIA, PA - JANUARY 1: Dez Bryant #88 of the Dallas Cowboys reacts against the Philadelphia Eagles at Lincoln Financial Field on January 1, 2017 in Philadelphia, Pennsylvania. The Eagles defeated the Cowboys 27-13. (Photo by Mitchell Leff/Getty Images)

Last week, I wrote just under 2,500 words on the running back position in my article here. Several weeks before that, I wrote a combined (nearly) 9,000 words on wide receiver efficiency here. This was a lot of work, and a lot of fun, but if I had it my way nearly every article I’ve written this offseason would have focused on cornerbacks instead. It’s my favorite position in the NFL, and one of the more important but underappreciated or poorly analyzed positions for fantasy. Fortunately for our subscribers who have access to Jeff Ratcliffe’s WR v. CB Matchup Chart and Shadow Matrix, no one does this better than PFF.

To explain the significance, imagine you had a difficult start/sit decision this week. You’re torn between two wide receivers, but can only start one (or, if in DFS, both are nearly equally priced and you can only fit one). One wide receiver has performed slightly better than the other, but operates out of the slot and should run the majority of his routes against Denver’s nickelback Chris Harris Jr. The other, projects to run the majority of his routes against Quinten Rollins. To me, this is an easy decision.

Across Harris’ career, wide receivers average just 1.28 fantasy points per target against him. Last season, there were 96 different wide receivers who saw at least 40 targets. Only one of them, Tavon Austin, averaged less than 1.28 fantasy points per target (1.26). Essentially, Harris has the uncanny ability of taking your team’s elite slot receiver and making him look, well, almost as bad as Tavon Austin.

Rollins, meanwhile allowed 2.42 fantasy points per target on 70 targets last season. Among the same 96 wide receivers who saw at least 40 targets last season, Rollins’ 2.42 fantasy points allowed per target would have ranked behind only Taylor Gabriel’s 2.80. Whereas Harris can shut down your team’s best receiver, Rollins consistently made pedestrian receivers look like one of the more-efficient in the league last season.

Cornerback play is especially important in DFS, where salaries are based mostly on team matchups and a player’s mean production. So when we get a plus cornerback matchup (Rollins) or a poor matchup (Harris) our decision is easy. But I wanted to take this a step further. Which wide receivers have been the most-cornerback sensitive over the past three seasons – who especially struggled against top cornerbacks, but beat up on weaker cornerbacks? This should identify wide receivers to heavily target or avoid based on weekly matchups for DFS.

Here’s the same thing, but looking at which wide receivers were the most-efficient against bottom-25-graded cornerbacks:

There are definitely some key takeaways here. Allen Robinson looks like a must-avoid when facing a top-tier cornerback. On 60 career targets against top-20-graded cornerbacks, Robinson has caught only 20 passes for 193 yards and one touchdown. Among all 116 wide receivers over the past decade to see at least 40 such targets, Robinson's 0.76 PPR per target average ranks second-worst.

Despite having the toughest CB-schedule in the NFL last season, @ajgreen_18 led all WRs in fantasy points per game prior to his W11 injury. pic.twitter.com/3dhdPVArLj

However, as evident in the chart below (where we sort by efficiency differential between top and bottom-25-graded cornerbacks), one wide receiver stood out more than any other in the above four charts.

On a fantasy-points-per-target basis, Dez Bryant has been the most cornerback-sensitive wide receiver over the past three seasons: 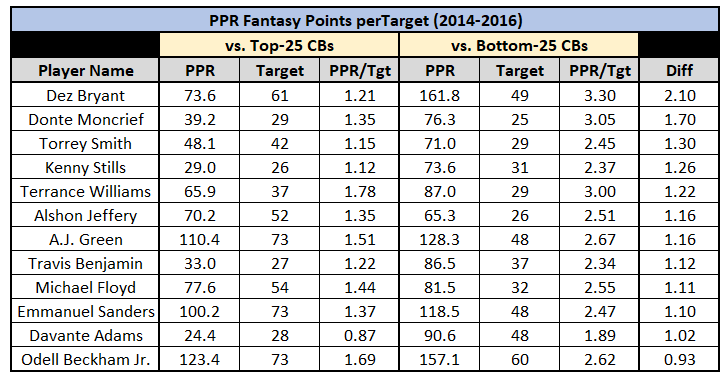 On a per-route-run basis the same thing is true again — Bryant has been the most-cornerback-sensitive wide receiver over the past three seasons: 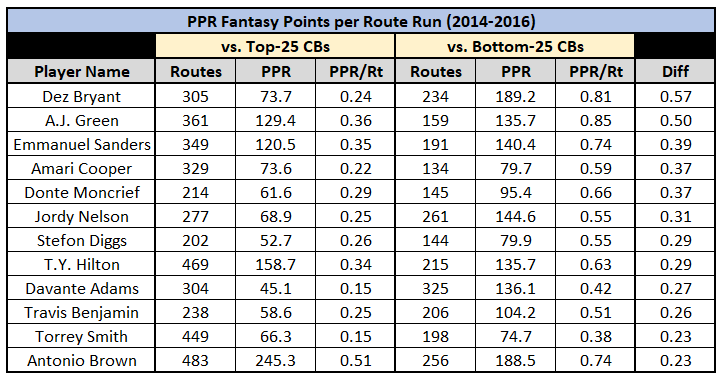 I was worried our data-sample was skewed by Bryant’s 2015 season, when he struggled with injuries and poor quarterback play, but his 2015 season only made up 12.2 percent of his qualifying routes in this sample.

Anyone can break down fantasy points by any number of different splits to find meaning when it isn’t really there. Throughout his career, Odell Beckham Jr. averaged 6.0 fantasy points per game more in even-numbered weeks than odd. Does this mean we should only start Beckham in Weeks 1, 3, 5, etc.? Of course not, but if these were home/away splits rather than odd/even splits, we’d never shut up about them. I find value in this data and will approach the 2017 season with these splits in mind, but as an added grain of salt, I talked to several PFF analysts who suggested that this might be purely due to randomness and a small-ish (539 routes, 110 targets) data sample. Basically, from looking at Bryant’s physical profile and tape, they were surprised and unsure why this might be the case.

For season-long leagues, things get trickier. If you’re drafting him at his current ADP (WR10), you’re likely not going to ever be in a position to bench him when in a tough matchup. This does raise another important question — like with Ben Roethlisberger, due to his weekly variance, should we downgrade Bryant in our redraft rankings? I actually think his current ADP is more than fair, and he should improve on last season’s numbers with added rapport from working with Dak Prescott all offseason. However, due to his brutal schedule to start the season, we might be better off trying to acquire Bryant as a buy-low trade target heading into Week 5. The Cowboys start their season off against the Giants, Broncos, Cardinals, and Rams. It's likely Bryant is shadowed by or is primarily in coverage against Janoris Jenkins, Aqib Talib, Patrick Peterson, and Trumaine Johnson in each game over this stretch. All four players graded among our top-25 cornerbacks last season. Things look much better for Bryant in Week 5, up against a Green Bay Packers defense that allowed the most fantasy points per game to outside wide receivers last season.