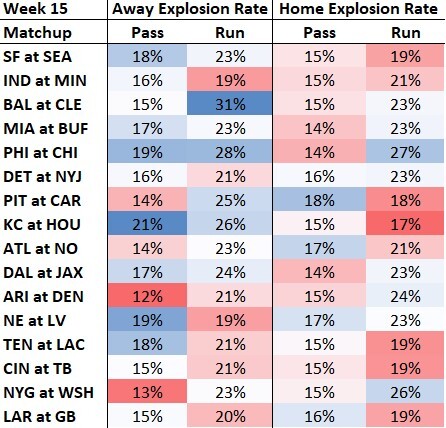 Has Tua Tagovailoa been figured out?: Probably not. Even back-to-back relatively porous performances weren’t enough to push Tua off the top of the leaderboard as PFF’s top-graded passer (86.6) while his marks in yards per attempt (8.7, No. 1) and passer rating (108.2, No. 2) also help demonstrate the reality that 2022 has been far more good than bad for his believers.

Still, Sunday night’s inaccurate performance against a banged-up Los Angeles Chargers defense was certainly a bit alarming, as Tua posted personal season-low marks in yards per attempt (5.2) and PFF passing grade (45.0). His 45.8% adjusted completion rate – the first time any NFL quarterback has posted a mark under 50% among 378 instances of a player having at least 25 dropbacks in a game this season — was the most concerning.

Further complicating matters is the Dolphins’ Week 15 matchup in Buffalo. Vegas seems concerned considering the Dolphins’ 17.5-point implied total is tied for the third-lowest mark of the week, although potential porous weather could also be playing a role in that.

Ultimately, Tyreek Hill and Jaylen Waddle are two of just seven players with 1,000 receiving yards this season. Fire up the PPR WR2 and WR11 as the fantasy studs that they have been all season long, even if there have been a few more bumps in the road than usual over the past two weeks.

Is TE Chigoziem Okonkwo actually a recommended start this week?: The matchup against a potentially Derwin James-less Chargers defense certianly helps. Even with James, the group has allowed the 10th-most receiving yards to opposing tight ends this season.

Week-to-week volume hasn’t been consistent, but the rookie fourth-round pick has managed to gain at least 30 receiving yards in six consecutive games despite hauling in just a single catch during three of those performances. Luckily, these good performances have led to more consistent opportunities, as Okonkwo is fresh off setting back-to-back season-highs in targets.