Wide receiver tiers are an important weapon in your fantasy football arsenal. Instead of the rigid approach of fantasy football rankings, tiers allow you more flexibility on draft day, which is key to dominating your opponents. With a tier-based approach, you can see how each player stacks up at his respective position.

Wide receiver is extremely deep this season. As you’ll see in the tiers below, there are a lot of strong options who will likely come off the board in the first four rounds. The good news is that you’ll still have plenty of upside options in the middle and later rounds. Let’s take a look at the 2019 fantasy wide receiver tiers.

[Editor’s Note: Follow along with all of Jeff Ratcliffe’s fantasy rankings tiers. All EDGE and ELITE subscribers can access the PFF Fantasy staff rankings.] 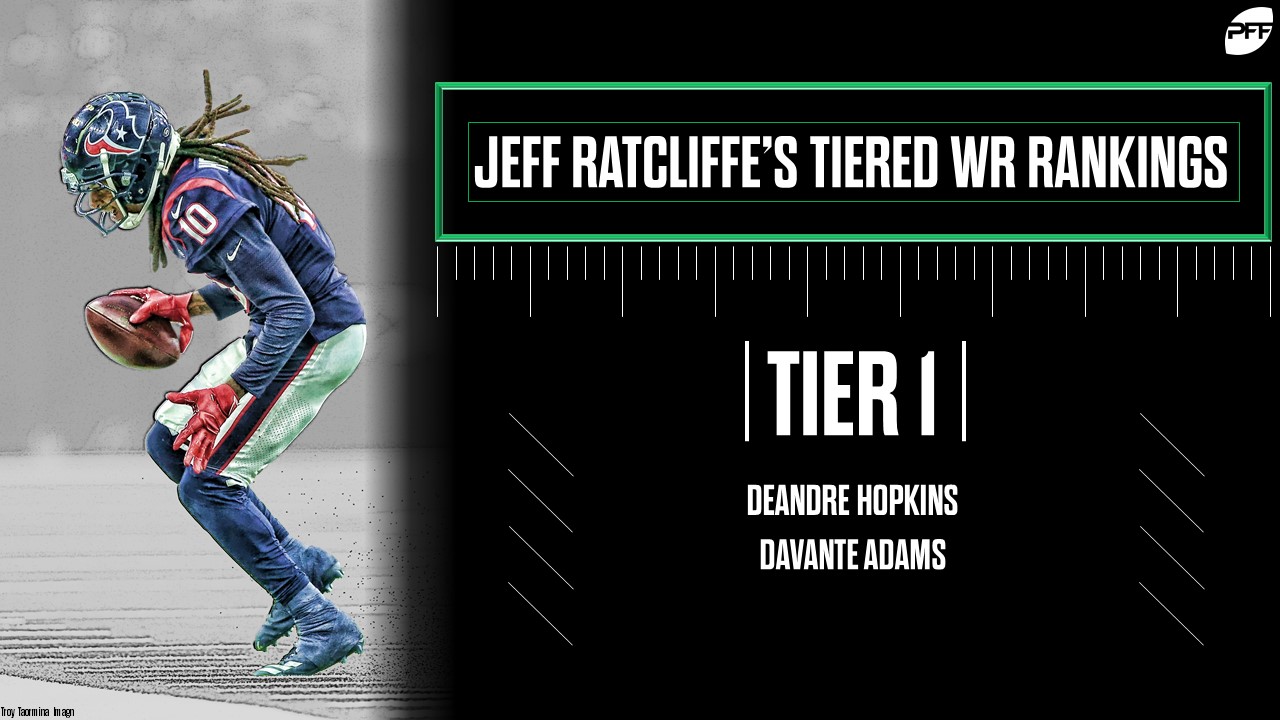 There’s no such thing as a “safe” player in fantasy football, but these two are about as safe as they come in 2019. Hopkins is coming off his second-straight No. 1 fantasy finish and has 24 receiving touchdowns over the last two years. Finding the end zone also hasn’t been a problem for Adams, as the Packers wideout leads all receivers with 35 scores over the last three seasons. Better yet, he’s coming off career-highs in catches (111) and receiving yards (1,386).

Tier 2 – Not as safe, but still elite

We have a slight dropoff from the top group to Tier 2, but these guys are still elite fantasy options who will all be off the board by the end of the second round in your 12-team leagues. Some fantasy players love to hate on Jones, but he’s been fantastically efficient on a per-route basis and scored a solid eight touchdowns last season. Thomas has arguably the highest floor at the position after notching a massive 125 catches last season, but his low average depth of target will cap his fantasy upside.

The Browns traded for Beckham in the offseason and he’s in a position to excel for fantasy purposes if he can stay on the field. Brown and Smith-Schuster are linked like binary stars after both receivers posted top-10 fantasy finishes with triple-digit catches on the same team last year. While it’s close between the two, we give the slight edge to Smith-Schuster, who is now the alpha in Pittsburgh following Brown’s trade to Oakland. That said, Brown is still in a position where he figures to see heavy volume.

The beauty to running backs going early and often this year is the fact that you can likely still get a WR1 in the third round of 12-team drafts. Some, if not all, of these guys will still be on the board when you’re up for your third pick. Hilton got off to a slow start last year, but he was 10th among wideouts in fantasy scoring from Week 7 on. Evans has five straight 1,000-yard seasons and is right on the edge of breakout territory. Allen doesn’t quite have the ceiling of Hilton or Evans, but his big-time volume gives him a high weekly floor. The trade to Dallas did Cooper good, as he ninth at the position in fantasy scoring from Week 9 on last year.

This group isn’t as good of a bet for WR1 numbers as Tier 3, but there’s still plenty of fantasy upside to be had with these players. Green is getting up there in age but has some intriguing potential in Zac Taylor’s offense. Thielen and Diggs both topped 100 catches last year and should pick right up where they left off. Like Green, Edelman is no spring chicken, but he’s also positioned well to dominate targets in New England. Cooks and Woods both finished as top-15 fantasy options last season. Hill is one of the biggest question marks on the board. Without his off-field issues, he’s easily up in Tier 2. But the fact that he could miss time due to suspension pushes him down the board just slightly.

After the first four rounds or so, you’re going to start seeing a lot of players with breakout potential come off the board. Sure, some of these guys have already partially broken out, but all of them have the potential to reach even higher heights in fantasy football. Golladay finished 22nd among receivers in PPR scoring last year and is positioned well as the Lions top receiving target. Godwin managed a 28th -place finish despite being the No. 4 option on his team. Kupp was top-15 before his knee injury in Week 6.

Three of these guys posted 10 touchdowns last year: Lockett, Ridley, and Williams. Look for each to see increased volume in 2019. Likewise, Anderson and Moore enter this season as the top targets on their respective teams. Both should see healthy target shares. Boyd isn’t the top dog, but he’s coming off a strong 2018 season and will have a favorable role in the Bengals new-look offense.

You may not get a “nice pick, bro” when you put these names on the draft board, but that doesn’t mean you should turn your nose up at good value. These unsexy options may end up falling further than they should on draft day. Jeffery remains the No. 1 wideout in Philly and should be second to Zach Ertz in targets. Watkins is a fantasy roller coaster ride, but he showed last season that he still has big-time weekly upside. Robinson disappointed last year, but he was also coming off a torn ACL in 2017. The Lions love Jones in the red zone. He has 29 end-zone targets over his last 25 games. While Landry disappointed last season, he’s in a much better spot this year as the second fiddle to Odell Beckham Jr.

Fantasy drafts keep giving wide receiver value this year, as this group of wideouts will be on the board in the middle rounds of your drafts. Some of these players have post-hype sleeper appeal (Davis, Shepard, and even Jackson) while others are viable breakout candidates (Pettis, Kirk, Sutton, and Coutee).

Tier 6a – No upside city

At the same time, you have Fitzgerald and Tate going in this range. Both options are fantasy mainstays who are past their prime. While their name-brand recognition will get them drafted ahead of some of the upside options in Tier 6, their low fantasy ceilings make them less-than-desirable fantasy options.

All six of these receivers are in a position to seize the opportunity available to them heading into this season. Gallup figures to slide right in as the No. 2 option behind Amari Cooper. There’s a big-time hole in Pittsburgh without Antonio Brown. Washington is arguably the favorite to capitalize on that opportunity, though Donte Moncrief and Diontae Johnson are also in the mix. Miller scored seven touchdowns last season despite being banged up. Valdes-Scantling didn’t do a ton in his rookie season but could earn No. 2 duties in the new-look Packers offense. Funchess looks to be a lock for the No. 2 job in Indy and offers red-zone upside with Andrew Luck throwing him the ball. Williams gets to play opposite Antonio Brown in 2019.

Unlike running back, you still have a number of intriguing late-round options this year. The Dolphins offense could struggle, but Stills has shown upside in the past. Metcalf could step right onto the field as the No. 2 in Seattle. Hamilton led the Broncos in catches over the final four weeks of last season and could see an expanded role again if Sanders lands on the PUP. And don’t overlook Brown in Buffalo. He was a top-25 fantasy wideout before Lamar Jackson took over in Baltimore last season.

If you’re going to use your last-round pick on a wideout, this is a group of options who will likely still be on the board and offer solid fantasy upside.

Editor's Note: The fantasy football season is quickly approaching, and we have more fantasy content than you could ask for: