The best fantasy QB options to stream for Week 5

Each week in this space, we’ll highlight the best quarterbacks to pick up and stream in fantasy football. A quarter of the way through 2019 and the quarterback position seems to be as unpredictable as ever.

Lamar Jackson, who has been the second-highest scoring quarterback so far this year, was drafted as the No. 13 quarterback and continues to shatter expectations, even in a loss to the Browns. Starting quarterbacks continue to fall as Mitchell Trubisky fell victim to a shoulder injury and Josh Allen entered the concussion protocol.

Regardless of the reason, if you’ve found yourself in need of a Week 5 streaming quarterback, you’ve come to the right place.

Before moving on to the next week, let’s take a look back at last week to see how our streaming options fared.

Notes: Dalton finished Week 4 with the rare “worst QB of the week” award, which was not ideal for fantasy owners streaming him. Otherwise, the remaining players combined for a mixed bag with Winston and Rudolph both outperforming our high expectations, while Bridgewater and Jones both made for replacement level plays.

The supply of the QB market continues to fall with Trubisky, Allen, and Sam Darnold all possibly set to miss Week 5, which means the demand for reliable QB options will continue to get greater. With that said, here is the best of what’s available in the Week 5 streaming QB market.

Through his first two weeks at the helm of the New York offense, Jones has looked the part of a starting NFL quarterback. With 0.62 fantasy points per dropback, Jones is tied for fourth — with none other than Patrick Mahomes — over the past two weeks and could even see that number go up with the return of Golden Tate. If you’re in need of a QB and Jones is available in your league, look no further. 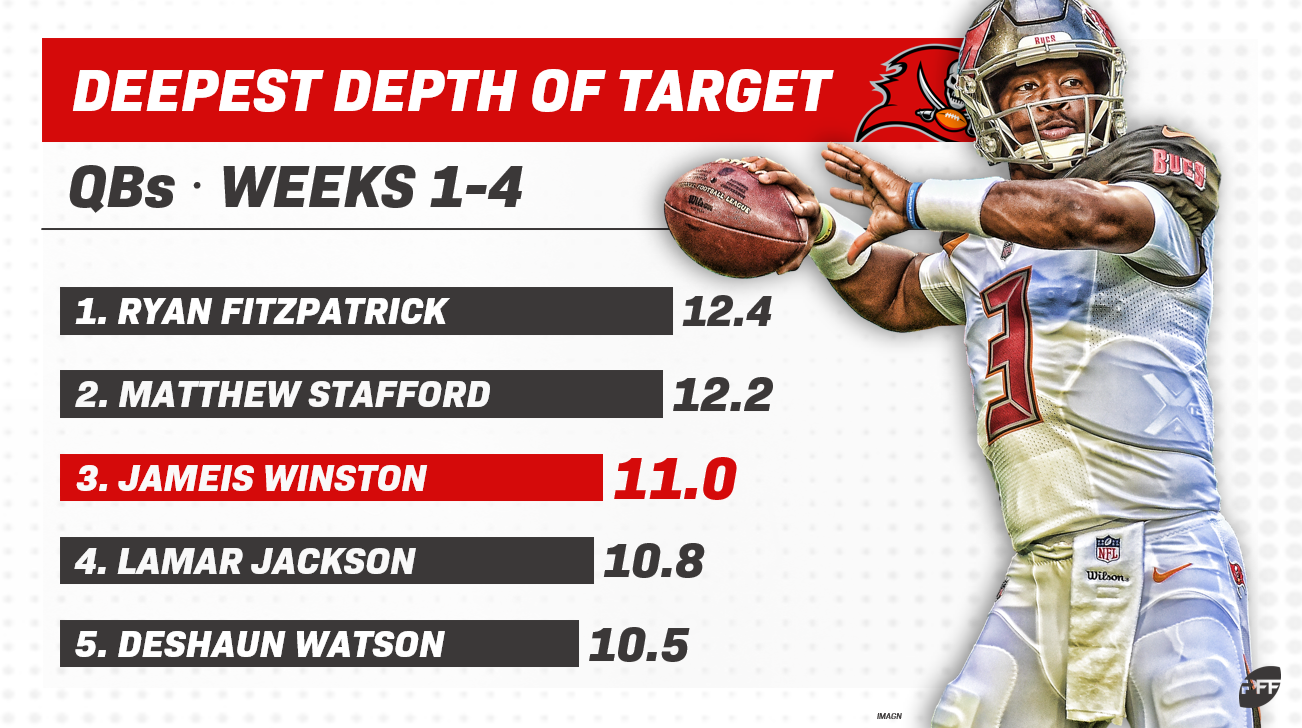 After leading all QBs in Week 4, it's only fitting that Winston makes our list once again. While it’s unlikely he repeats such a performance, a matchup against the Saints — who have allowed the eighth-most passing yards so far in 2019 — makes Winston an ideal streaming option for Week 5. While Winston is still not quite a weekly starting option, his average depth of target of 11.0 yards is a promising sign of good things to come.

After his performance Monday night, it might be surprising to see Dalton’s name on this list. If you started him in Week 4 and can’t bring yourself to do it again, I certainly understand that, but if you find yourself without a QB this week and Dalton is available, you might have no better choice. He is facing the Cardinals — who have one of the 10 worst secondaries in the league when it comes to stopping opposing quarterbacks — seemingly giving him an opportunity for redemption. Dalton has struggled to find the end zone so far in 2019, but the high-volume passing attack employed by Zac Taylor and the Bengals offense should continue to keep Dalton in the streaming QB conversation.

The legend of Minshew just keeps growing. Minshew has been taking a very conservative approach to quarterbacking and it shows, as the rookie has not thrown an interception since Week 1. Over the past two weeks, he is among just eight quarterbacks who have thrown more than 10% of their throws into the end zone, and as such, has been rewarded with 4 TDs. Minshew is a low-ceiling quarterback who offers a high floor for fantasy owners who may need a bye-week solution.

Cousins, like Dalton above, is a subpar fantasy quarterback facing a subpar passing defense, which makes for a sneaky streaming option. Cousins is the only quarterback in the league who has started all four games but has less than 100 attempts, which implies that a big day could be ahead should anything happen to Dalvin Cook or should the running attack struggle. Available in almost every league, Cousins could have his first breakout game of 2019 against the Giants should he be forced to pass the ball, and if that’s the case, Cousins will make for a solid streaming option in most deep leagues.

If Rudolph can bring the same division-rival energy that he brought to Heinz Field Monday night into next week against the Ravens, the sky's the limit for the young quarterback in Pittsburgh. While his overall stat line may look more impressive than his actual gameplay was, Rudolph's persistence in finding open targets out of the backfield made him a solid starting QB last week and should do the same moving forward.