The best fantasy QB options to stream for Week 2

It’s only fitting that Ryan Fitzpatrick headlines this column as the top fantasy quarterback from Week 1. Never mind that Fitzpatrick averaged a ridiculous 1.24 fantasy points per dropback. Just look at the rest of the field.

Of Sunday’s top-12 fantasy quarterbacks, half of those QBs came from outside the consensus top-12 positional rankings entering the week. All six of those dark-horse finishers were started in less than 30 percent of ESPN lineups in Week 1, and in fact, nearly all of them remain unowned in one-third of leagues.

Of course, we saw the same thing week in and week out last season. And the season before that, and the one before that, and … The depth of the QB field is why waiting until the later rounds to draft a starter has gone from outlier strategy to mainstream to “Enough already, we get it!” Heck, it’s ultimately why this same weekly series was a finalist for some industry hardware over the winter.

But enough about the past, let’s look ahead to the top streaming options for Week 2. Until bye weeks and injuries start to take effect, the parameters are pretty simple: less than 50 percent ownership in ESPN leagues and/or priced outside the top-12 QB options on FanDuel. In the season’s early going, these will primarily be options for DFS and 2QB leagues.

Just because it’s an obvious choice doesn’t mean it’s wrong. And no, I’m not talking about chasing Fitzpatrick against the Eagles’ stingy defense. Despite completing just 15-of-35 aimed passes against Pittsburgh, Taylor still posted the fifth-best fantasy output by a quarterback on Sunday with 25 points. How did he manage this? The same was he so often does: with his legs. Taylor turned eight carries into 77 yards and a TD, which would have been good enough to finish as the RB13 in standard scoring on Sunday. 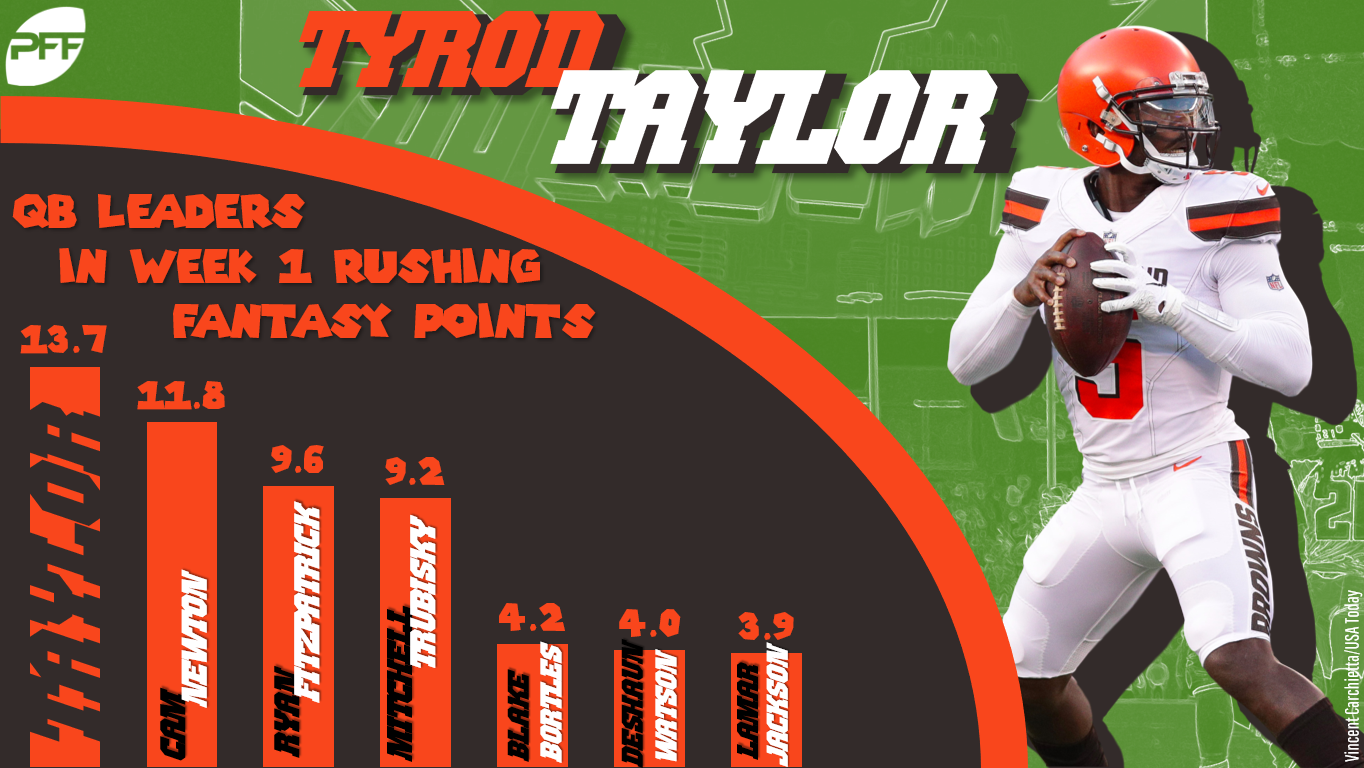 Taylor deserves a mulligan for his 48.6 adjusted completion percentage, given the rain-soaked conditions against Pittsburgh and the fact that his accuracy percentage has hovered around 73 percent over the past two seasons. Often appearing skittish in the pocket, Taylor also faced pressure on nearly half of his dropbacks (44.4 percent). Don’t expect a repeat of that against New Orleans, which was the only defense on Sunday to grade out in the bottom-five in both PFF coverage grade and pass-rush grade.

Look, I get it. Foles was dreadful all preseason, and then managed all of four fantasy points on 36 dropbacks against Atlanta, and that includes a would-be interception that was dropped. The thing that we’ve often seen with Foles is a total lack of middle ground, meaning he tends to be either really good or really bad. One day, he’s tossing 27 TDs against only two interceptions or winning Super Bowl MVPs, the next he’s – well, he’s Nick Foles in Week 1.

Whether or not a Super Bowl hangover was to blame on the night the Eagles unveiled their shiny new banner, Foles is a strong Week 2 rebound candidate assuming Carson Wentz remains sidelined. For one, Philadelphia faces a Buccaneers pass defense that just got obliterated by Drew Brees and company. It’s also worth noting that Foles was without two regular receiving weapons in Alshon Jeffery and Mack Hollins, in addition to a handful of missed opportunities with new additions Mike Wallace and Dallas Goedert. Goedert, by the way, played only 17 snaps, a number that figures to rise moving forward for PFF’s top-ranked tight end in this year’s draft class.

The results left more to be desired, but the Matt Nagy effect was on display in Chicago’s come-from-ahead loss to Green Bay. With an innovative scheme and quicker tempo, the Bears’ 66 plays were eight more than last season’s average that marked the second-slowest pace in the league under predecessor John Fox. Nagy deployed the short passing game to keep the chains moving, as Trubisky’s average time to throw (2.34 seconds) was the seventh-quickest on Sunday. Trubisky also completed all six of his play-action pass attempts, which were a staple of Nagy’s offense in Kansas City.

What to expect for an encore? How about a few more shots downfield. One of Trubisky’s strengths is his mobility to extend plays, and we didn’t see a whole lot of that against Green Bay. On the docket this week is a Seattle defense that generated only seven pressures and one sack in Week 1 – for some context, former defensive end Michael Bennett had 70 pressures alone in 2017. Playing in front of a fired-up home crowd on Monday night, look for Trubisky to better involve his new toys in Allen Robinson, Anthony Miller, and Trey Burton.

Keenum and company get a home date against the division-rival Oakland Raiders. Oakland finished No. 27 in pass coverage grade a year ago and are coming off a short week and are without, of course, their biggest defensive playmaker from 2017. We already know that Keenum has a couple of top-notch perimeter weapons in Demaryius Thomas and Emmanuel Sanders, who combined for 16 catches, 198 yards and a TD against Seattle in the opener. Rookie Courtland Sutton also made his presence felt as the No. 3 WR, making a couple of 20-plus-yard catches.

In throwing for 329 yards and three scores (plus three interceptions) against Seattle, Keenum enjoyed a clean pocket on 85 percent of his dropbacks, the third-best percentage on Sunday. He also had a 153.3 passer rating on seven play-action throws thanks to a ground game that churned out 146 yards and averaged 4.6 YPC. Keenum may not be a top-tier fantasy option, but Denver’s well-rounded offense gives him a relatively high floor, as evidenced by his top-seven fantasy effort on Sunday despite those three picks.

Flacco may or may not be #elite, but his 86.9 PFF passing grade was third-best on Sunday, trailing only Fitzpatrick and Brees. While it’s typically ill-advised to chase the previous week’s production – particularly on a Thursday night road tilt – a case can be made for Flacco as a viable option in DFS tournament lineups or 2QB leagues.

The Bills’ defense may have lost some bite from a year ago, but Baltimore’s offensive line deserves credit for giving Flacco a clean pocket 82.9 percent of the time he dropped back to pass in Week 1. As a result, his 90.6 adjusted completion percentage was the best in the league on Sunday. Baltimore’s offense unveiled several trick plays and packages in running up the score, as Flacco missed only seven of his 32 aimed throws. Don’t look now, but he has now thrown for multiple TDs in five of his last six outings dating back to last year.