The best DSTs to stream in fantasy in Week 13

Here are the defenses you should be looking to add in Week 13:

For what feels like the 12th week in a row, [defense facing Miami] is one of our top streamers of the week. That’s because Miami is giving the most fantasy points per game to opposing defenses (13.1), yielding double-digit fantasy points in nine of 11 games. Miami is also an especially excellent matchup for the Eagles, who rank fourth-best in PFF pass rush grade (81.1). Miami ranks worst in PFF pass-block grade (44.8). Philadelphia is an easy top-five fantasy defense this week, and, as a bonus, they also have a top matchup in Week 14, at home against the Giants. 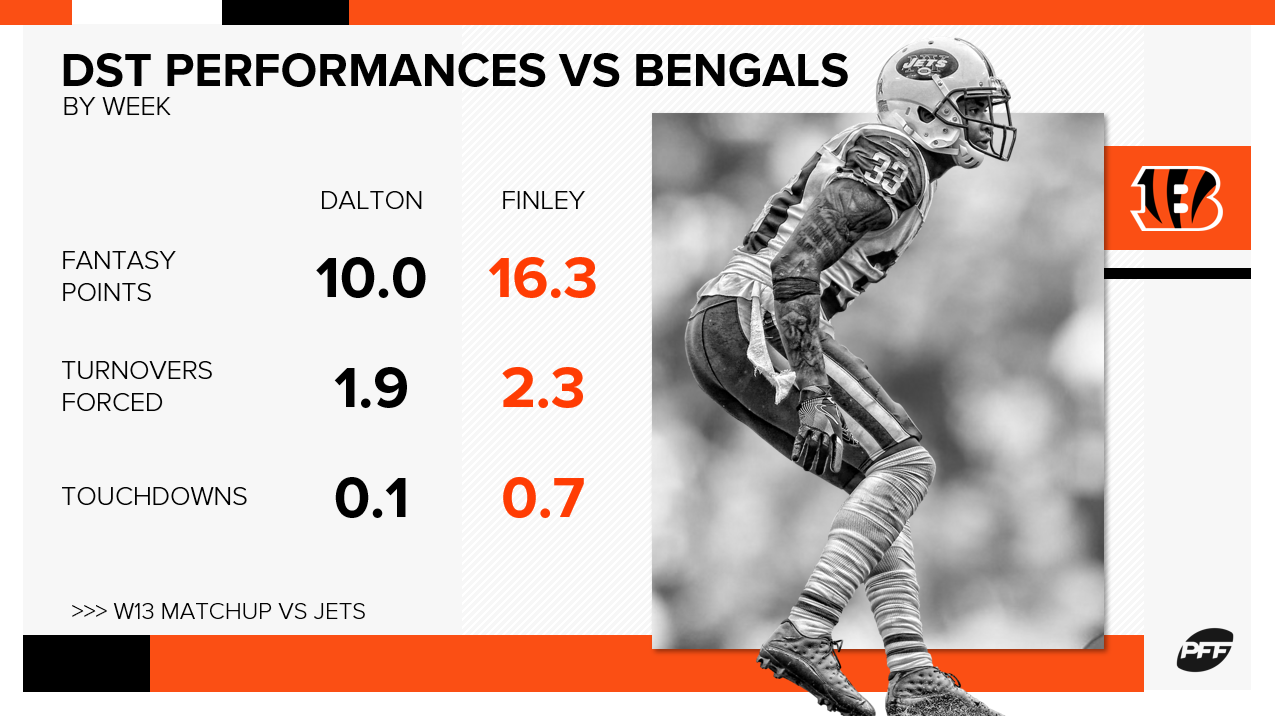 (Note: After this was written Monday, the Bengals announced they would be going back to Andy Dalton as the starter. The bumps the Jets down a spot in the ideal streaming category for Week 13. Opposing DSTs have averaged 10.0 fantasy points a game against the Bengals even in Dalton's starts, so the Jets are worth streaming either way. We're leaving the initial analysis below, but be aware that Dalton, not Finley, will start Sunday.)

New York’s defense might be a good deal better than you’d expect, ranking sixth in fantasy points per game (8.8) and 11th in PFF grade (76.6). They also rank best in rushing yards allowed per game (78.1) and rushing yards allowed per carry (3.01). So, with Joe Mixon negated, forcing Cincinnati to lean heavier on the pass, New York should be in an excellent position to exploit Ryan Finley and rack up fantasy points for their owners. Cincinnati is giving up the fourth-most fantasy points per game to opposing defenses (11.8), but the most since Finley was named the starter (16.3). In three starts, Finley averages 3.7 sacks and 2.0 turnovers per game, along with a 62.1 passer rating. As a bonus, the Jets also have a top matchup in Week 14, at home against the Dolphins.

Washington isn’t too far off of Cincinnati and Miami, ranking sixth-worst in fantasy points allowed per game (10.6). Like Cincinnati, they’ve also been especially terrible with their rookie quarterback under center, yielding 12.2 fantasy points per game when Dwayne Haskins played. Of 36 qualifying quarterbacks, Haskins ranks worst in passer rating (55.9), worst in interception rate (5.5%), and worst in sack rate (15.7%). Up against, a Carolina defense that ranks ninth in fantasy points per game (8.5), Washington was given a 15.5 implied point total by Vegas – the lowest of the week.

In Week 13 – Thanksgiving week – we have a cornucopia of options to stream. Green Bay is No. 4 on our list, but still an easy bet to finish top-10 at the position this week. New York is giving up the third-most fantasy points per game to opposing defenses (12.7). Since his first career start, Daniel Jones is averaging 3.7 sacks and 2.3 turnovers per game. As a bonus, the Packers also have a top matchup in Week 14, at home against the Redskins.