The best DSTs to stream in fantasy in Week 12

Here are the defenses you should be looking to add in Week 12:

For what feels like the 11th week in a row, a defense playing Miami is your top streamer of the week. That’s because Miami is giving the 13.4 fantasy points per game to opposing defenses — only New England’s defense is averaging more — and yielding double-digit fantasy points in eight of 10 games. Cleveland ranks just 18th in fantasy points scored per game (6.7), but they also rank seventh in sacks per game (3.0) while Miami’s offense ranks third-worst by the same stat (3.9). In a difficult week for streaming defenses, and even without Myles Garrett, Cleveland is easily your top option.

Miami ranks second-worst in fantasy points allowed per game, but the Redskins aren’t too far behind, ranking fifth-worst (10.8). Washington’s offense also ranks worst in points scored per game (12.5) and third-worst in yards per drive (23.8). Keep in mind, now, with Dwayne Haskins under center, we should expect an even better matchup for Detroit. Among all 37 qualifying quarterbacks, Haskins ranks second-worst in passer rating (58.9), worst in interception% (6.3%), and worst in sack percentage (14.0%). 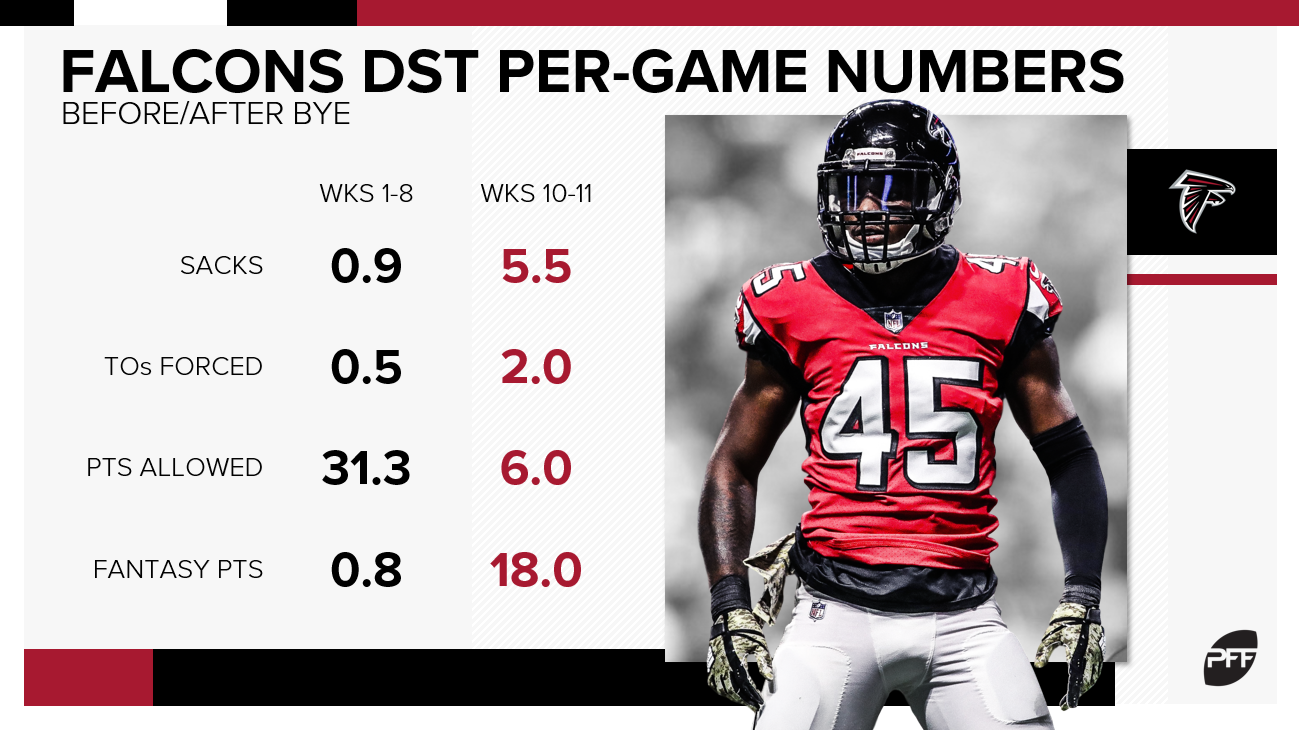 Dan Quinn surrendered defensive playcalling duties following the team’s Week 9 bye. Since then, in just two games, Atlanta’s defense has recorded 11 sacks and four turnovers while allowing just 6.0 points per game. They’ve scored a league-high 36.0 fantasy points over this span, which is also four times as much as their total over their prior eight games. Clearly, Atlanta’s coming into Week 12 hot, and now they get a top matchup too – for the second straight season, Tampa Bay ranks sixth-worst in fantasy points allowed per game (10.7).

Tennessee is one of only four defenses that rank top-12 in fantasy points per game (8.4, eighth) and are going up against an offense that ranks bottom-12 in fantasy points allowed per game (7.8, 12th). Quietly, Tennessee’s defense ranks top-10 in PFF grade (77.2), points allowed per game (19.7), and turnover percentage (12.4%). Add all this up, and it feels safe to expect a top-12 finish from Tennessee this week.