The best DSTs to stream in fantasy in Week 10

We’re back again for our weekly check-in on streaming defense/special teams options in fantasy football. We can’t all be so lucky and own the New England Patriots defense, a legitimate league-winner. And, I’m sure, not all of you listened to me earlier in the year and held onto San Francisco’s defense — a likely top-three defense all year. For everyone else, you may want to consider streaming defenses.

Here are the defenses you should be looking to add in Week 10:

After finishing fifth in fantasy points per game last year, Baltimore’s defense hasn’t been nearly as productive for fantasy in 2019. However, they still have all the makings of a top real-life defense on paper, ranking second-best in rushing yards allowed per game (83.0) and sixth-best in opposing passer rating (84.5). At the very least, they’re an easy bet for top-five production this week. With Andy Dalton under center, Cincinnati’s offense ranked fifth-worst in sacks per game (3.6), sixth-worst in turnovers per game (0.9), and seventh-worst in fantasy points allowed per game (10.1). Now, with the Bengals fully embracing tank mode, with a fourth-round rookie quarterback making his first career start, Baltimore’s defense should feast.

Pretty much every time a defense is less than 50% owned and playing against the Dolphins, you’re going to be seeing its name near the top of this column. That’s because Miami is giving up 15.3 fantasy points per game to opposing defenses, which ranks second-most among all offenses, and would rank second-most among all defenses. Indianapolis, of course, is no exception. They rank eighth-best in passing yards allowed per game (246.8) but have been more susceptible on the ground. Luckily, that shouldn’t be an issue this week, against Kalen Ballage and his 2.0 yards per carry. Indianapolis is a safe bet to finish top-five at the position this week. 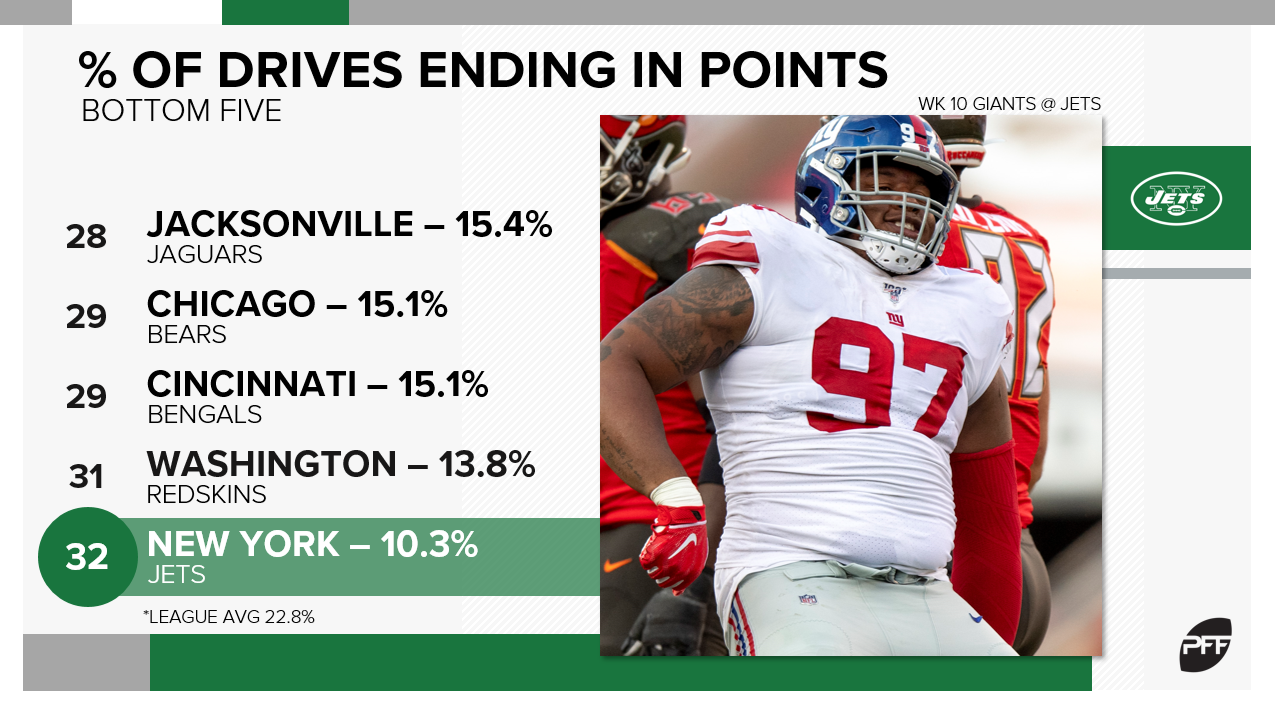 At least for fantasy purposes, the Giants’ defense has probably been better than you’d expect. They rank 12th in fantasy points per game (7.2). Meanwhile, the Jets’ offense has also probably been worse than you’d expect — unless of course you knew they were the worst offense in the league. The Jets are giving up a league-high 16.6 fantasy points per game to opposing defenses. Sam Darnold might not be the worst quarterback in the league, but he is playing behind the league’s worst offensive line. The Jets rank worst in pressure rate (44.4%), worst in sack rate (12.5%), worst in points per drive (0.73), and third-worst in turnovers per game (2.1). Even the lowly Giants should be viewed as a borderline top-six fantasy defense this week.