Fantasy football stats: The most fortunate touchdown-catchers of 2018

With that in mind, today we’re going to look at the most significant touchdown luck in 2018, and what it might mean for the 2019 season.

To start with, I like to establish a threshold. Personally, I like easy lines to cross — in this case, 10%. In the last 12 seasons, there have been 1,503 player-seasons with at least 50 targets. That’s 1,503 different players to work with. Sufficiently large. Of that 1,503, there have been 72 players to score on at least 10% of their targets. That’s just under 5% of the time, which feels appropriately exclusive.

So again, with the knowledge that a player who scores on 10% or more of his targets one year is likely enough as to make it a near-guarantee to not do that again the next season, let’s look at the eight players to cross the threshold in 2018, and what that means for their 2019 stock. 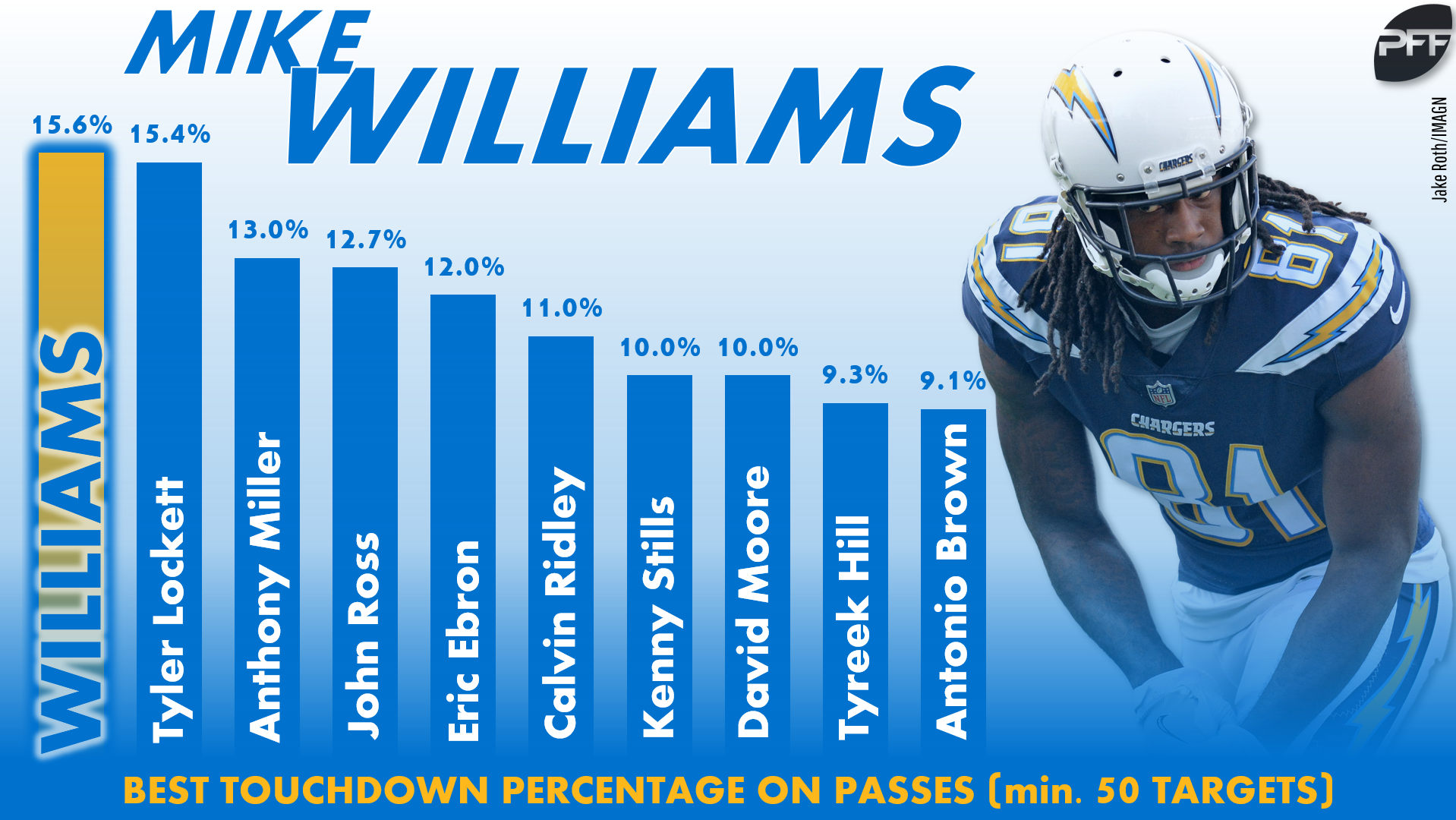 There are points working in Williams’ favor. He’s entering Year 3, a common enough breakout year for wide receivers. Tyrell Williams is a free agent, potentially opening up 63 targets. He’s got the pedigree to be a big performer. But a 15.6% scoring rate that is likely to fall means he’ll need those factors.

Williams finished 2018 as WR32. If you ding him four touchdowns (loosey-goosey math just for effect), he’d be outside the top-40. For him to develop like many are projecting, he’d need to improve that much more in targets, receptions, and yards to offset that depreciation. Williams is a intriguing 2019 prospect, but early guess is he’s going to be drafted near the top of his value.

Lockett was a long-time favorite of some of our writers, called a breakout candidate at least each of the last two seasons and maybe the last three. So his pop in 2018 wasn’t exactly surprising, but it was exciting — he offered a perfect 158.3 passer rating when targeted, a first in the 12-year PFF era. He finished as WR16, a savior for Seattle with Doug Baldwin banged up much of the year and the best finish by a receiver with under 1,000 yards.

In 2019? Well, Baldwin should be healthy (or healthier), while the team seems increasingly liable to lean on the run. Lockett is an intriguing option going forward, but he’ll be overdrafted in 2019 by more than I’m comfortable with picking.

Miller played 14 games and scored 7 touchdowns, never scoring more than one in a game, never going more than one game in a row scoring or scoreless. He was as consistently inconsistent as it is probably possible to be. A rookie running a close third string behind Allen Robinson and Taylor Gabriel and with Tarik Cohen and Trey Burton also taking targets, Miller needed every one of those touchdowns just to finish as WR61.

With a year of development for Miller and Mitchell Trubisky, though, I think he’s about as likely to improve his target total as he is to see his touchdown rate decrease. And if he’s scoring less often but having more chances to do so, well, that’s a net wash at least. I expect Miller to be a sneaky sleeper in 2019. 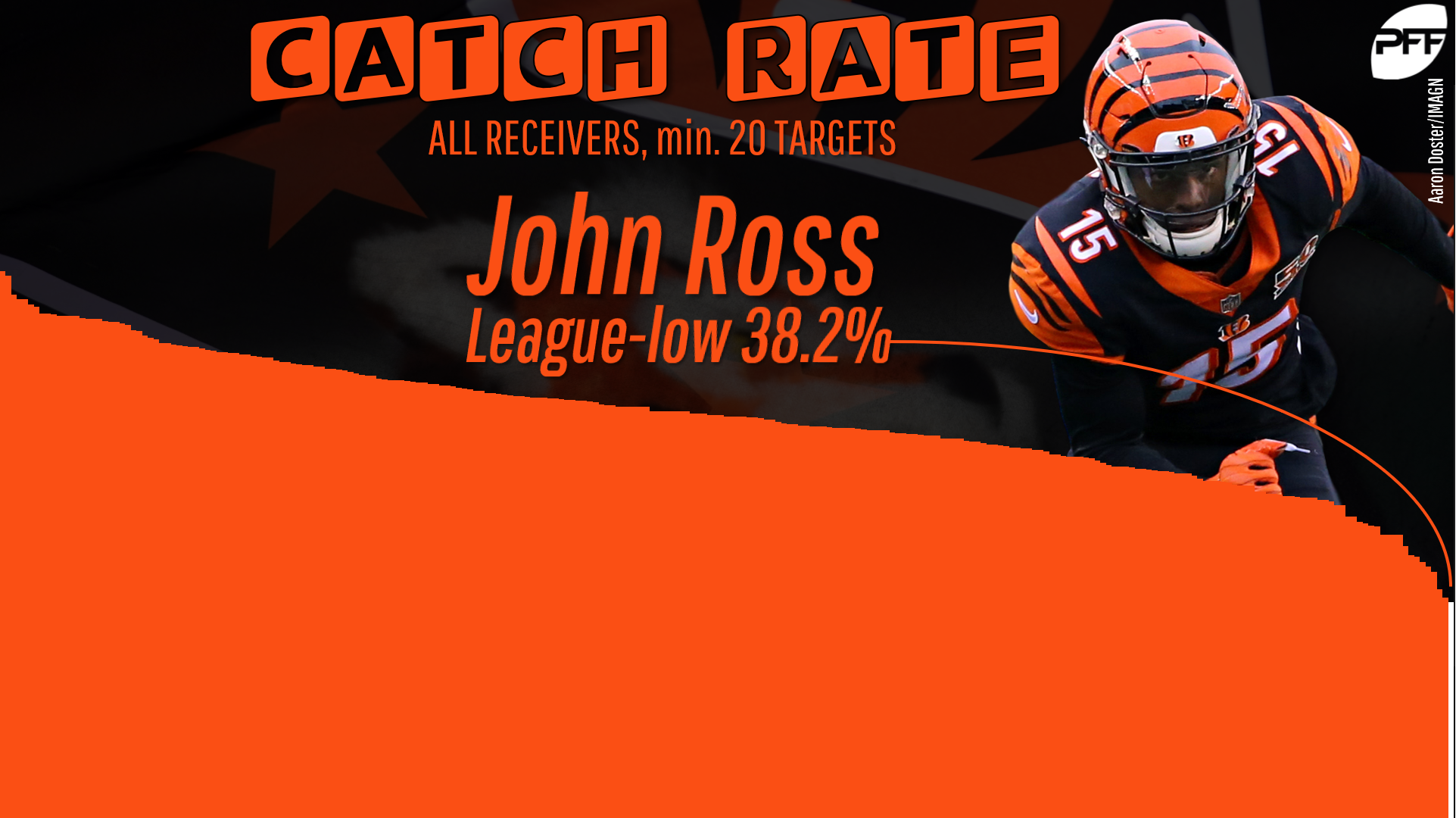 If there’s hope for Ross, it’s in new head coach Zac Taylor, who comes over from a Rams offense that used three-receiver sets heavily with Robert Woods, Brandin Cooks, and Cooper Kupp. If that develops into something in Cincinnati, the former first-rounder Ross still has clear potential alongside A.J. Green and Tyler Boyd. But as it stands, he’s not draftable outside of deep leagues.

Ebron is the only player in our sample who topped 100 targets and still maintained the 10% scoring rate. Ebron famously now has more touchdowns in one year as a Colt (14, counting a rushing score) than he did in four years with the Lions (12), helping him to a fourth-place finish in TE fantasy scoring — and a comfortable fourth place, 30 points ahead of fifth-place Jared Cook and more than 60 clear of sixth-place Austin Hooper.

For Ebron, a former first-rounder, 2018 was a realization of the potential many saw in him from the start, and it was almost certainly a career year. For 2019, though, there are some signs of worry. It starts with that sure-to-regress touchdown percentage, of course, but there’s also the return of Jack Doyle to the Colts offense, and the fact that the Colts, laden with cap space, are likely to bring in at least one receiver this offseason to pair with T.Y. Hilton. At a barren position like tight end, Ebron will still be drafted as an easy TE1, but his position isn’t as secure as his 2018 results might indicate.

You could argue the 11% number for Ridley already includes regression — through Week 4 of the season, he had 6 touchdowns on 21 targets (28.6%) before scoring 4 more on 70 targets the rest of the way. But parsing small samples into even smaller samples is asking for trouble, so let’s stick with 11%.

The good news for Ridley is that he was generally speaking the No. 3 receiver in the Atlanta offense in 2018, and with a year of seasoning under him, he’s likely to fully surpass Mohamed Sanu and be the No. 2 for 2019. (They each had 91 targets in 2018, but Sanu ran 830 routes to Ridley’s 644.) That should help him offset the coming slide in touchdown success, and will slot Ridley in as a mid-range WR3, though his upside is capped as long as Julio Jones remains healthy. 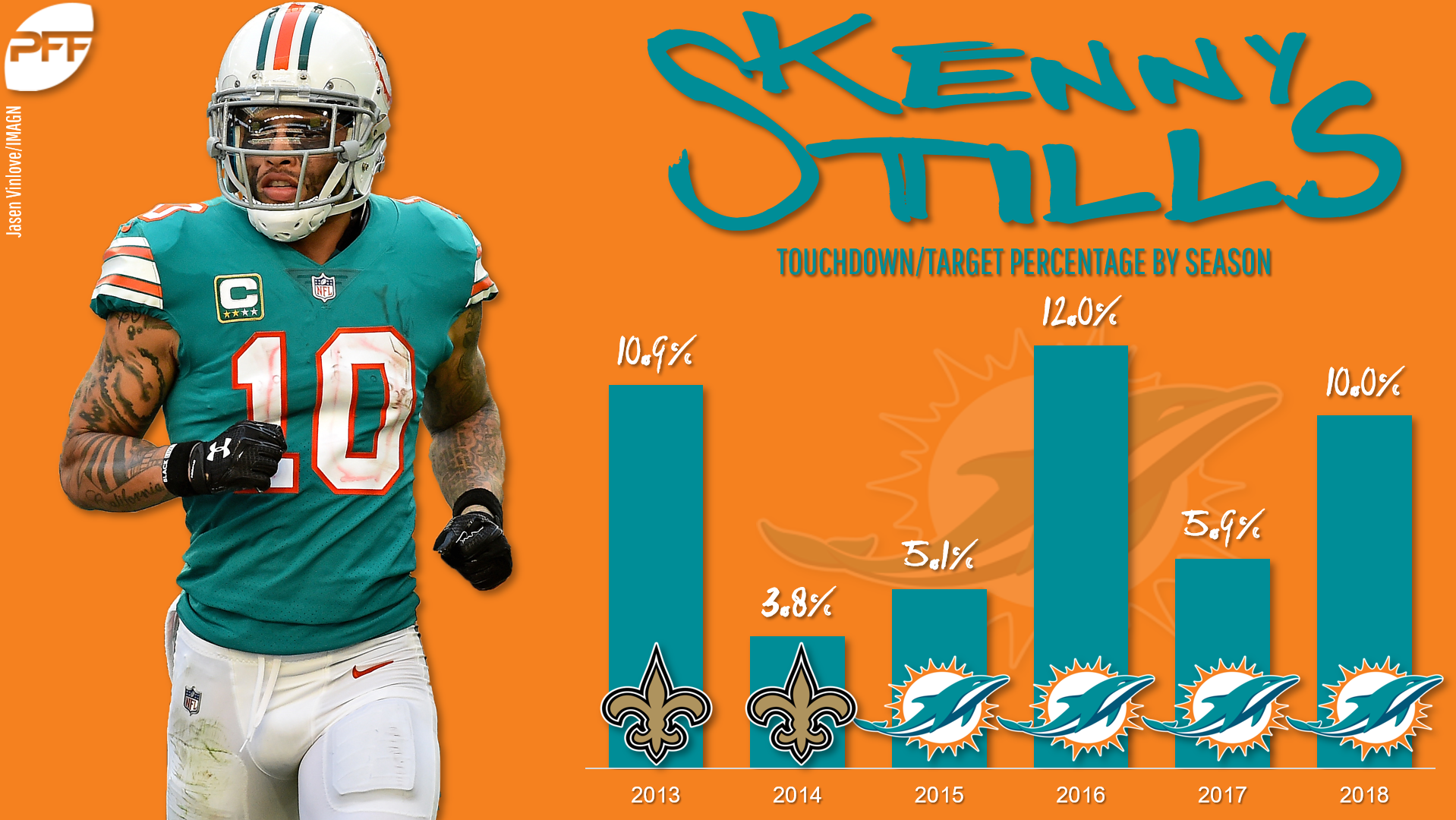 Between a new coaching staff and the possibility (likelihood?) of a new quarterback in 2019, plus the return from injury of Albert Wilson and Jakeem Grant, so much is changing with Stills’ status this offseason that projecting his draft stock this early might be foolish. But despite his improved scoring rate, Stills fell from WR26 in 2017 to WR56 in 2018, and for now, you’d have to predict him to finish 2019 closer to the latter than the former.

Moore is the second Seahawk on this list, which could help explain how Russell Wilson’s touchdown total climbed from 34 to 35 in 2018 despite attempting 126 fewer passes. For Moore, a big chunk of his success came in a three-game stretch in the middle of the season (4 of his 5 touchdowns came in Weeks 5-8, with a bye in there) while Doug Baldwin was still recovering from injury.

Given Moore’s likely unsustainable luck, the Seahawks’ apparent commitment to the run, and the chances Baldwin is healthier in 2019 than he was in 2018, you’d bet on Moore to fall off in the coming season. He’s only draftable as a super-late flyer.