CARSON, CA - SEPTEMBER 24: Keenan Allen #13 of the Los Angeles Chargers gestures during the game against the Kansas City Chiefs at the StubHub Center on September 24, 2017 in Carson, California. (Photo by Sean M. Haffey/Getty Images)

With another week of action behind us, and some more fresh stats to analyze, I’m here to help you with your toughest fantasy football start/sit decisions for Week 13 of the NFL season.

Johnson is averaging 13.6 carries and 5.0 targets per game over his last five games. That’s been good for 15.2 expected fantasy points per game and 17.4 actual fantasy points per game, or borderline RB1 numbers. The Rams rank sixth-worst in yards allowed per carry (4.90) and Johnson has been seeing good enough target volume that he won’t be too negatively impacted if or when the game gets out of hand. If he’s active and not on a snap count, I’d start him as a high-end RB2. 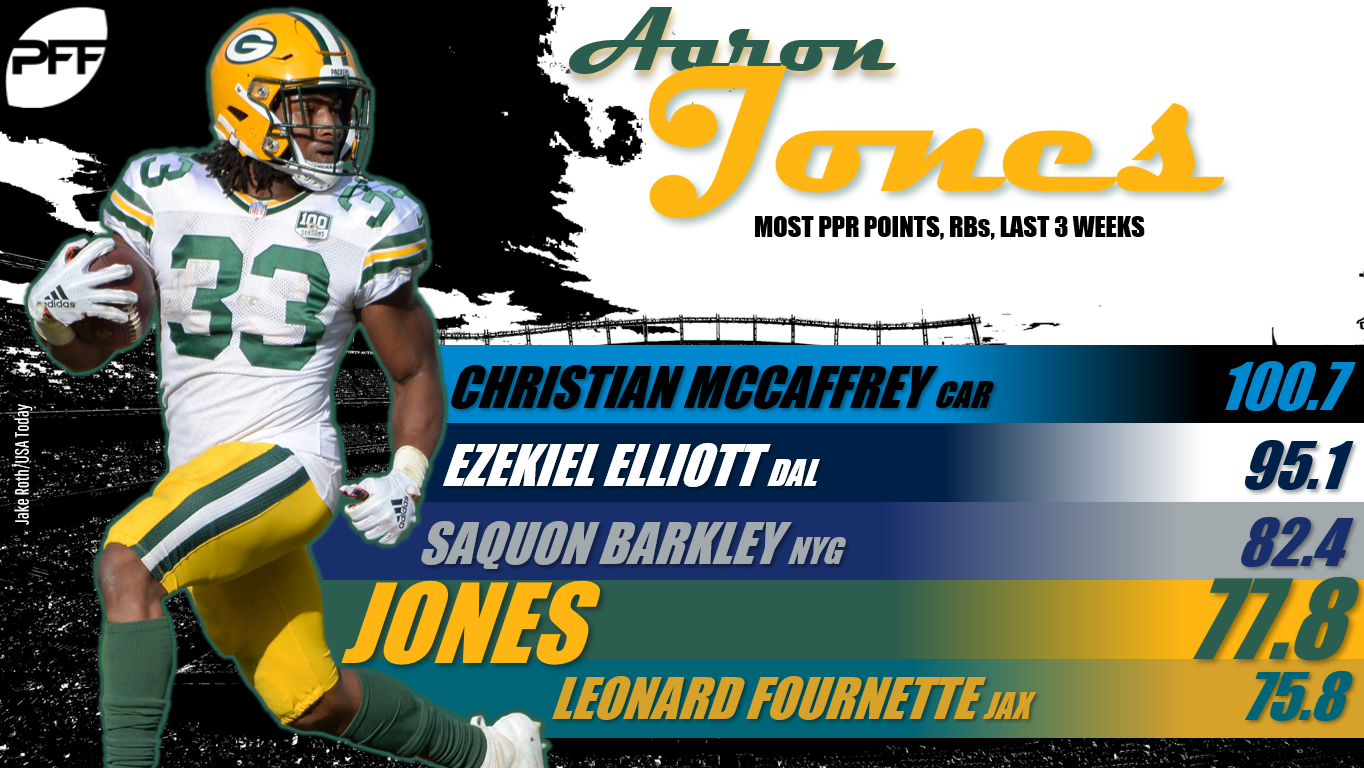 Jones ranks fifth among running backs in fantasy points per game (25.9) over the last three weeks. Over this span he’s played on 79% of his team’s snaps while drawing 90% of the carries and 100% of the targets out of the backfield. After two tough matchups with bad gamescript, Jones has an ideal matchup this week. Green Bay is favored by 14, up against an Arizona defense that is giving up the most rushing fantasy points per game to opposing running backs (20.9) and ranks 12th-worst in yards allowed per carry. Over the past two seasons, Jones leads all running backs in yards per carry (5.79).

Over the past two weeks, even with Royce Freeman back, Lindsay has still maintained 60% of the team’s snaps and 64% of the team’s touches out of the backfield. In addition to good volume in recent weeks, he’s also been hyper-efficient all year, ranking third-best in yards per carry (5.8) and 10th-best in PFF grade. This week he gets a Cincinnati Bengals defense that is giving up the second-most fantasy points per game (32.1) and the fifth-most yards per carry (4.91) to opposing running backs.

In terms of volume (expected fantasy points), Woods has been the team’s WR1 regardless of Cooper Kupp’s status and has seen even better volume with him out. Woods spends more time in the slot when Kupp is out (39% to 67%) and gets a soft matchup against a Detroit defense that ranks seventh-worst in fantasy points per game allowed to opposing slot wide receivers. With Brandin Cooks likely drawing shadow coverage from Darius Slay, even more volume should be funneled Woods’ direction this week.

Hilton is likely to be shadowed by Jalen Ramsey (assuming he plays) this week – as he has in all three games against Jacksonville over the past two seasons. Over this span, he averages just 9.8 fantasy points per game. Although Hilton isn’t an outright fade, he is worth bumping down to the mid-to-low-end WR2 range.

Gordon is averaging 84.6 yards per game over his last five games. That’s impressive, but I’m skeptical he’s as productive this week, as we’re projecting shadow coverage from Xavier Rhodes. Rhodes has shadowed nine times this year, up against some of the league’s best wide receivers in Davante Adams (2x), Brandin Cooks, Alshon Jeffery, Marvin Jones, Allen Robinson, and more. These wide receivers combine to average just 7.3 fantasy points per game against him in coverage. Gordon gets bumped down to the high-end WR3-range.

Cook hasn’t topped 10 carries since Week 1, and averages just 2.5 targets per game since Week 4. Even in a soft matchup, he’s still hard to trust. Like the other names on this list, he might not be an out-right fade, but he is worth bumping down to low-end RB2 numbers this week. 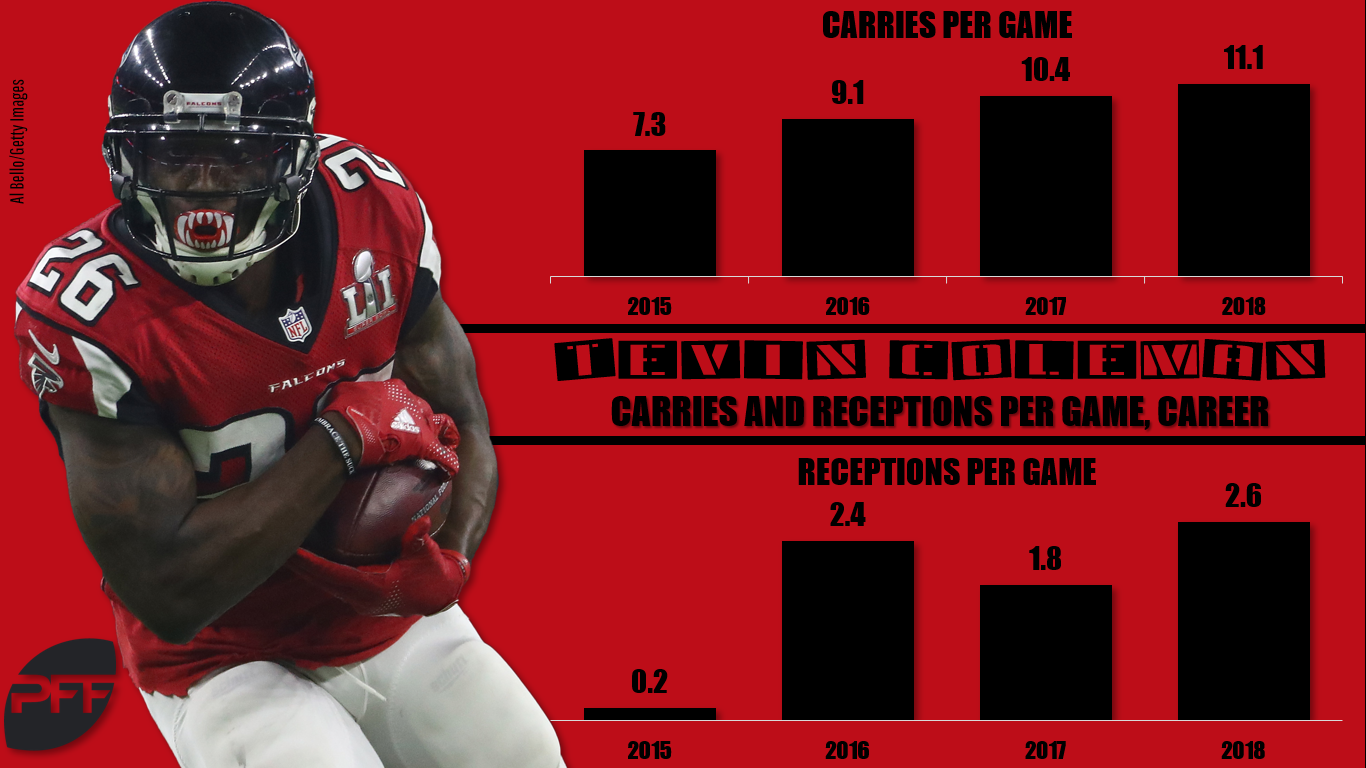 Coleman has seen just 22 touches over his last two games and now draws a worst-possible matchup against the Ravens. Baltimore ranks best in schedule-adjusted fantasy points per game to opposing running backs, and also ranks fourth-best in yards allowed per carry (3.50).

Over the last two weeks, Adams is averaging 14.5 carries, 3.5 targets, and 16.3 fantasy points per game. Over this span, he’s played on 59% of the team’s snaps and seen 75% of the team’s running back opportunities. On Monday, Doug Pederson said Adams has taken the lead in the backfield and the Eagles are trying to increase his touches. With more volume coming, Adams should be started as a mid-range RB2 this week.

Ekeler is our single-highest-graded running back this year and ranks second-best in PFF elusive rating. Melvin Gordon exited Week 12 early due to injury and will sit out Week 13 and possibly beyond. The last time Gordon missed time (Week 7), Ekeler played on 95% of the snaps. Last week, after Gordon’s exit (but before Ekeler and Philip Rivers were pulled from the game in the fourth quarter), Ekeler saw three carries and six targets, while fellow running back Justin Jackson saw four carries and zero targets. I’m expecting Ekeler to see a Gordon-esque workload this week, but even if I’m wrong and Jackson eats into some carries, it shouldn’t matter as much this week. Ekeler’s receiving work is locked in and he should be called upon in that capacity quite a bit, as underdogs to the Steelers.

Edwards has hit at least 115 rushing yards in back-to-back weeks. Over this span, he totals 40 carries, 233 yards, one touchdown, zero targets, and 13 missed tackles forced (most). The lack of target volume is a risk this week, with tentative gamescript against the Falcons (Baltimore is favored by only 1.5 points). Still Atlanta is a soft matchup overall, ranking fourth-worst in yards allowed per carry. Edwards should be started as a low-end RB2 if he’s active.

Since Week 5, Hooper ranks fourth among tight ends in targets per game (7.3) and sixth in fantasy points per game (12.9). This week he gets a Baltimore Ravens defense that has given up 27% of their total receiving fantasy points allowed to tight ends, which ranks most in the NFL.

On top of putting together one of the least efficient fantasy seasons from a wide receiver in recent memory (as outlined here), Landry is also no longer seeing the volume that kept him fantasy-relevant. Despite Baker Mayfield having two of his best games over this span, Landry totals just 17 targets over his last three games. 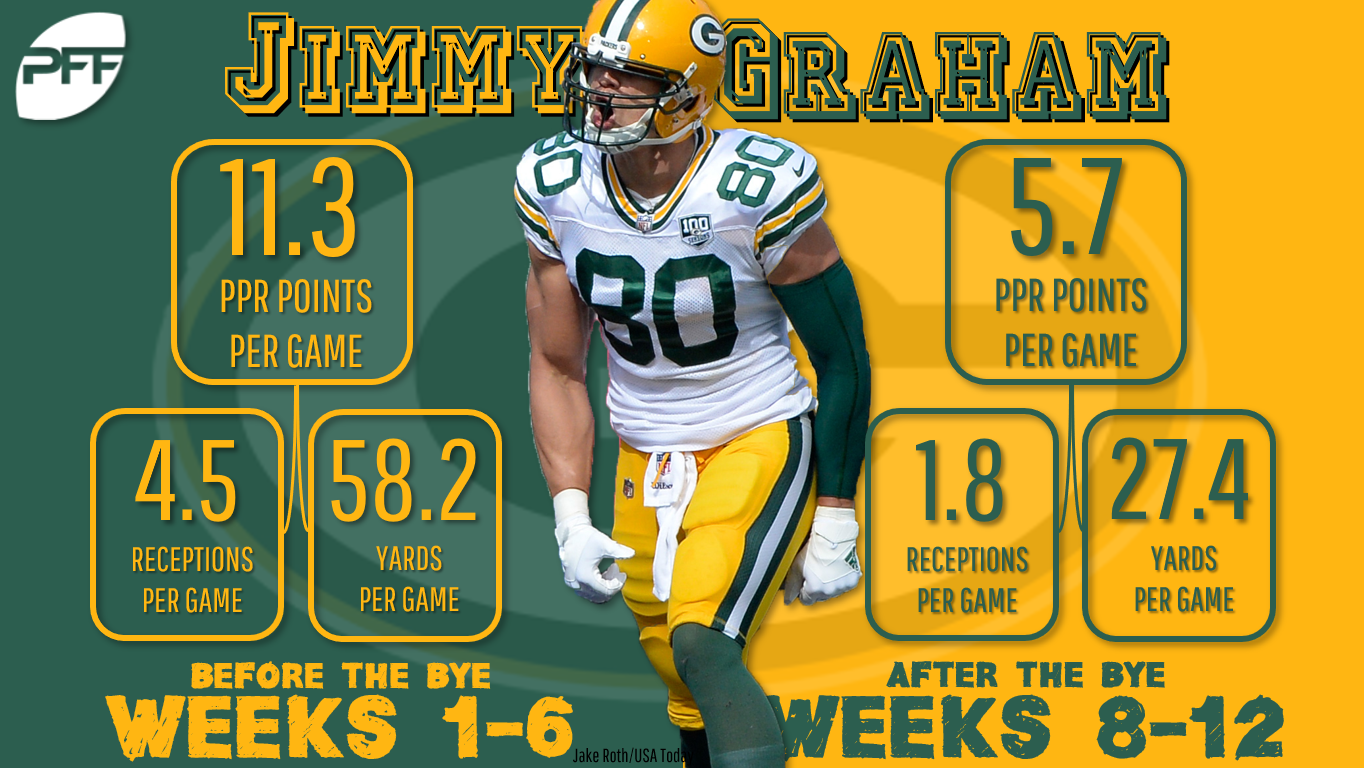 Graham totals just four catches and 10.1 fantasy points over his last three games. He’ll be limited moving forward with knee and thumb injuries. He’s probably more drop-worthy than he is start-worthy this week. 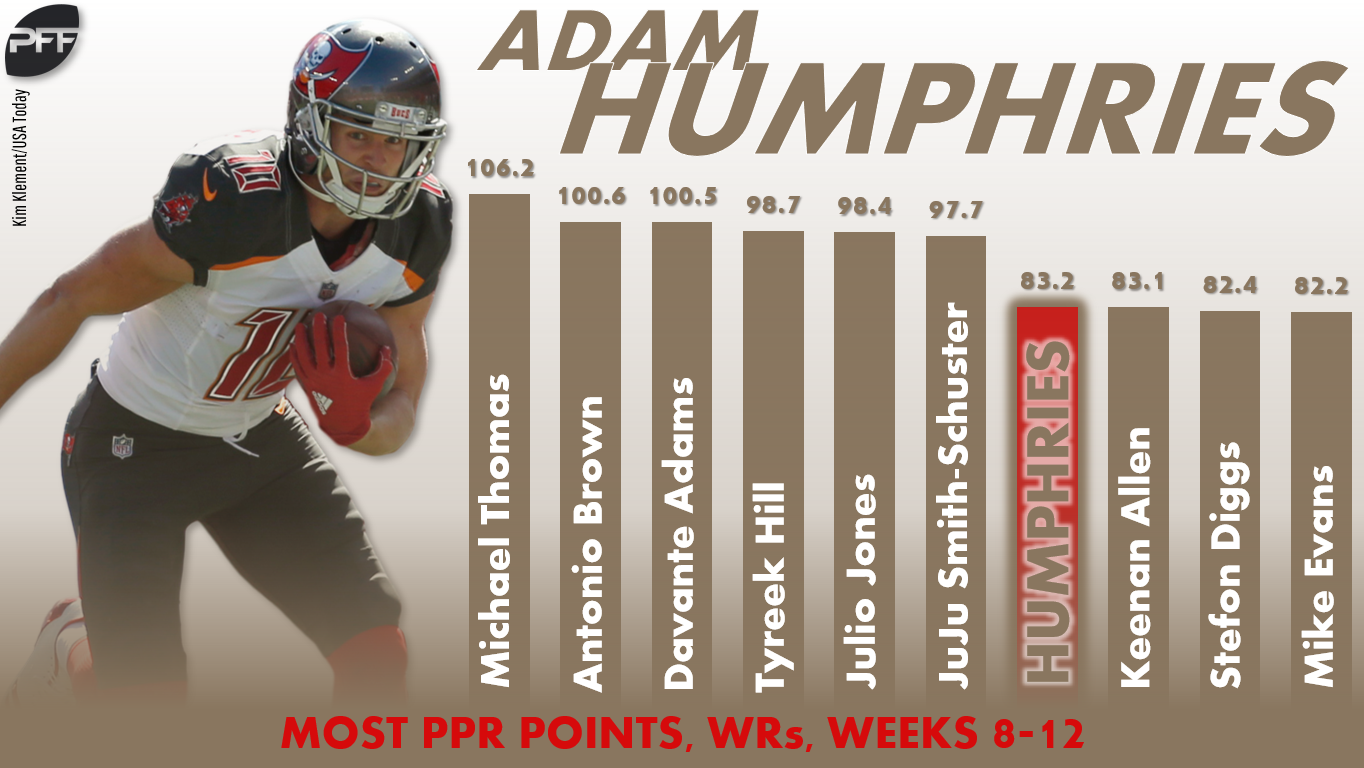 Starting in Week 8, Humphries ranks seventh among all wide receivers in fantasy points, and averages 16.8 fantasy points per game over this span. Although volume hasn’t been as good (implying a looming regression to the mean), he’s still a must-start as a mid-range WR3 in deeper leagues.

If looking for a desperation flex-play, Ellington might be your guy. Ellington has seen 16 targets over the past two weeks and should see good volume again this week. Marvin Jones is out, Kenny Golladay has a tougher draw against Marcus Peters and Aqib Talib (assuming he’s back) on the outside, while Los Angeles is giving up the fifth-most fantasy points per game to opposing slot wide receivers (where Ellington has run 46% of his routes).

Hyde saw 10 carries and zero targets last week (with Leonard Fournette exiting in the third quarter) to T.J. Yeldon’s three carries and four targets. After complaining about a lack of volume on Tuesday, Jacksonville might try to appease him by getting him more work this week. In a neutral matchup this week, with Fournette out, I have Hyde ranked as a high-end RB3.

Jeff Heuerman was averaging 6.0 targets per game over his last four games. Now, he joins Jake Butt on IR. The only other Denver tight end with a catch this year is LaCosse. If desperate for a spot-start from the tight end position you can do a lot worse.