We’re now in Week 8 of the NFL season. To help prepare, here’s my weekly look at the top starts and sits for fantasy football players in IDP leagues.

The fantasy season has basically reached its halfway point. The playoffs are firmly in sight, making lineup decisions critical as IDP owners begin to make that stretch drive.

There is now ample information available to discern the players we can trust on a weekly basis to make a run for the championship. Let’s take a look at some Week 8 start/sit options. Keep in mind that Atlanta, Baltimore, LA Chargers, and Tennessee are on bye weeks.

The veteran has quietly been putting up DL2 numbers through the first seven weeks. This is a great matchup for Sheard to put up at least one sack for the third consecutive game. Over the past four games, the Raiders have allowed 12.5 sacks to a defensive lineman. Big-play opportunities will be in play as well as in those games defensive linemen have put up an interception and two forced and recovered fumbles. 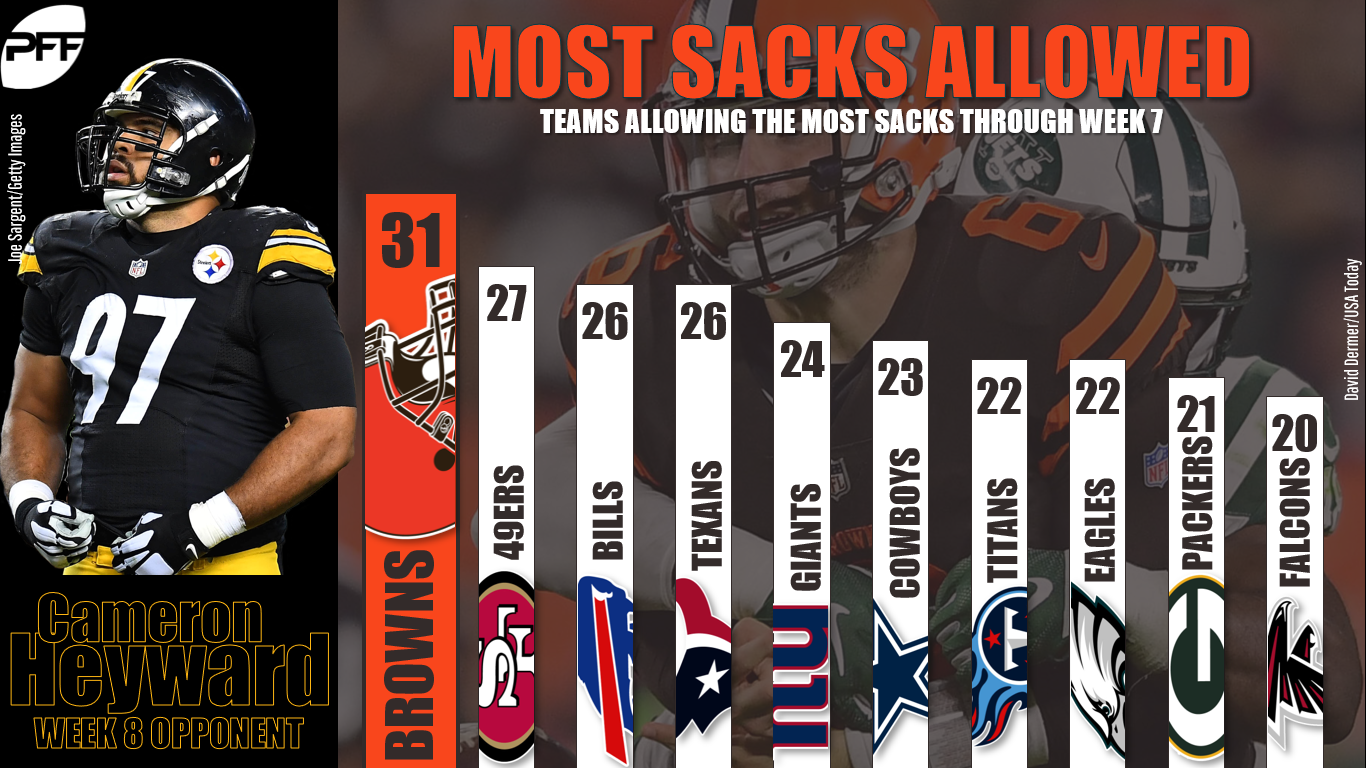 After putting up a disappointing goose egg in Week 7, Heyward has a very favorable matchup for a bounceback performance. The Browns are allowing an average of 2.28 sacks per game to defensive linemen in 2018. In the Week 1 matchup between the teams, Heyward finished with DL1 totals, putting up seven total (five solo) tackles and a sack. In his past four games against the Browns, Heyward has had at least one sack three times and has 7.5 total against them over his career.

If Quinn is ever going to jump start his 2018 season from a fantasy standpoint, this Thursday night matchup is a golden opportunity. Over the past five games, the Texans have been a top-five offense in allowing points to the defensive end position, giving up 13 sacks and four forced fumbles. Quinn has only managed one sack (back in Week 2) but did manage a quarterback hurry and a hit last week against Detroit. For the season, Quinn has been credited with 16 total pressures and should cash in this week with at least one sack.

The Bills offense has been struggling mightily but has been surprisingly stingy when it comes to allowing points to defensive linemen. Over the past five games, Buffalo has allowed just two sacks to a defensive lineman along with one forced and one recovered fumble. Flowers has been trending in the wrong direction since his 1.5-sack performance in Week 1. Since that game Flowers has managed just a half sack with 16 total tackles and one forced fumble.

There are a couple of factors to consider when sitting Addison down this week. First and foremost is that he left Week 7 early with a back issue and has not been practicing early in the week. Secondly, the Ravens are a tough matchup, having allowed just two sacks and a fumble recovery to a defensive lineman in the last three games.

It’s great to see Griffen return to the Vikings, but it’s too risky to start him until his status for Week 8 and moving forward becomes clear. There would likely be a snap count if Griffen does play as he works into game shape. The Saints are one of the stingiest offenses in allowing points to opposing defensive linemen.

The second-year linebacker is coming off perhaps his best game of the season, grading out highly across the board. The positive grade in coverage is especially encouraging as that has been an issue with Davis. The 6/1/7 with a sack statline saw Davis finish as a solid LB2 in Week 7. This week Davis faces a Seahawks offense that runs the ball an average of 30 times per game. With newly acquired Damon Harrison taking on blockers for Detroit, Davis will be freed up to get after the ball-carrier.

The script flipped in Week 7 as McMillan played 54 of the 64 defensive snaps and rookie Jerome Baker played just 31. McMillan made the most of his increased snaps, finishing with eight total tackles and a forced fumble. The Texans rushed the ball 37 times in their Week 7 victory over Jacksonville and will look to do the same this week. Twice this season there have been two opposing linebackers reach double-digit tackles against the Texans in a game.

After back-to-back double-digit-tackle performances, Hitchens crashed back to earth in Week 7 with a 3/0/3 stat line. Another disturbing trend is that Hitchens has yet to post a single splash play in 2018. This is not a matchup to turn things around as Denver has allowed just 38 total tackles, half a sack, and a forced fumble in the last three games.

Things were looking up for Barron as he returned from injury in Week 5, playing 80% of the snaps and finishing with nine total tackles. Unfortunately, in the last two weeks Barron has played less than 70% of the snaps and has a total of five tackles. This week’s matchup is a tough one as the Packers are allowing an average of just 18 tackles per game to linebackers and have given up just two sacks and a fumble recovery to the position in 2018.

The Browns traded DeShone Kizer to Green Bay to acquire Randall and immediately returned him to the more comfortable free safety position the he played in college. That move has paid huge dividends as Randall is currently posting top-10 fantasy numbers and is coming off a 12-total-tackle performance in Week 7. Randall kicked off his breakout 2018 season by posting five total tackles and an interception against the Steelers in Week 1.

The rookie safety has been a fantasy standout through seven weeks, averaging 7.5 total tackles per game while adding a pair of interceptions. Bates posted his first double-digit-tackle game last week, putting up 12 against the Chiefs lining up in the box six times. There will be plenty of opportunities for tackles as well as splash plays in the matchup with Tampa bay. In the past four games, the Buccaneers have allowed 112 total tackles and five interceptions to the defensive back position.

The thought over a year ago when he signed in Jacksonville was that Church would step in and put up Jonathan Cyprien-type numbers. That simply has not worked out and it doesn’t look like it will change any time soon. Over the last three games, Church has a total of 10 tackles and is coming off a miserable two-assist game last week. In the past four games the Eagles have allowed double-digit tackles to a safety just once, when Landon Collins had 10 in Week 6.

There remain health concerns regarding Boston as he sat out Week 7 with a shoulder injury. As of Wednesday, Boston was not participating in practice and we’ll need to monitor practice reports out of Arizona. Should Boston suit up this week it is too risky to trust a DB with shoulder issues to finish the game.

In the past, Quin has relied on splash plays for the majority of his fantasy production as he put up nine a season ago. As I’ve often stated, chasing splash plays is not an advisable strategy — Quin has yet to register one in 2018. The Seahawks are a tough matchup for defensive backs, allowing an average of only 22 total tackles per game to the position and six splash plays on the season.