JACKSONVILLE, FL - DECEMBER 11: Defensive End Everson Griffen #97 of the Minnesota Vikings celebrates after a tackle during the game against the Jacksonville Jaguars at EverBank Field on December 11, 2016 in Jacksonville, Florida. The Vikings defeated the Jaguars 25 to 16. (Photo by Don Juan Moore/Getty Images)

We’re now in Week 16 of the NFL season. To help prepare, here’s my weekly look at the top starts and sits for fantasy football players in IDP leagues.

It’s championship weekend in many fantasy leagues and I congratulate all the owners who are still alive and kicking. It’s been a particularly rough IDP season with a barrage of injuries to big-time performers, but we are finally closing in on the finish line.

(To those owners in leagues that incorporate Week 17 into their championships, we will indeed have a Week 17 edition of the start/sit article.)

Here are the Week 16 start/sit options and good luck to all.

Let’s ride the hot hand here at this critical point in the fantasy playoffs; there have been few defensive linemen hotter than Buckner. Last week, Buckner was a one-man wrecking crew putting up 11 total tackles and two sacks in the 49ers victory over the Seahawks. Over the past four games, Buckner has five sacks and 26 total tackles. In that time Buckner has been credited with 15 total quarterback pressures and is a top-five defensive lineman for fantasy purposes. Look for the hot streak to continue against a Bears offense that has allowed seven sacks in the last three weeks.

The veteran Griffen got back on track last week, posting a sack and has a great matchup to make it two weeks in a row against Detroit. While the Lions managed to keep Buffalo from notching a sack in their Week 15 loss, the offensive line continues to struggle. A banged-up Matthew Stafford was pressured a total of 15 times against the Bills. In the Week 9 meeting between these teams the Vikings were credited with a whopping 34 total quarterback pressures and 10 sacks. Eight of the sacks were credited to the defensive line position and Griffen had 1.5 sacks in the Vikings 24-9 victory.

Let’s slow our roll before chasing the gaudy 5/1/6, three-sack statline Atkins put up against the Raiders last week. It was purely a matchup-based performance against a Raiders offense that has allowed 7.5 sacks to defensive linemen in the last three games. In the eight games prior to his big Week 15 output, Atkins had a total of 11 tackles and zero sacks. In the last three games the Browns have allowed no splash plays and just 25 total tackles to defensive linemen. In the Week 12 meeting between the division rivals Atkins was credited with an assisted tackle.

Reed has been on a bit of a roll the past three weeks roll with six solo tackles and three sacks, including two last week against the 49ers. The 8.5 sacks Reed has posted in 2018 are by far a career high in a breakout season. The matchup this week is what lands Reed a sit designation. The Chiefs have been very stingy against defensive linemen over the last three games. In that time Kansas City has allowed just two sacks and no other splash plays to defensive linemen. Reed is also dealing with an oblique issue, which further limits his fantasy value in Week 16. 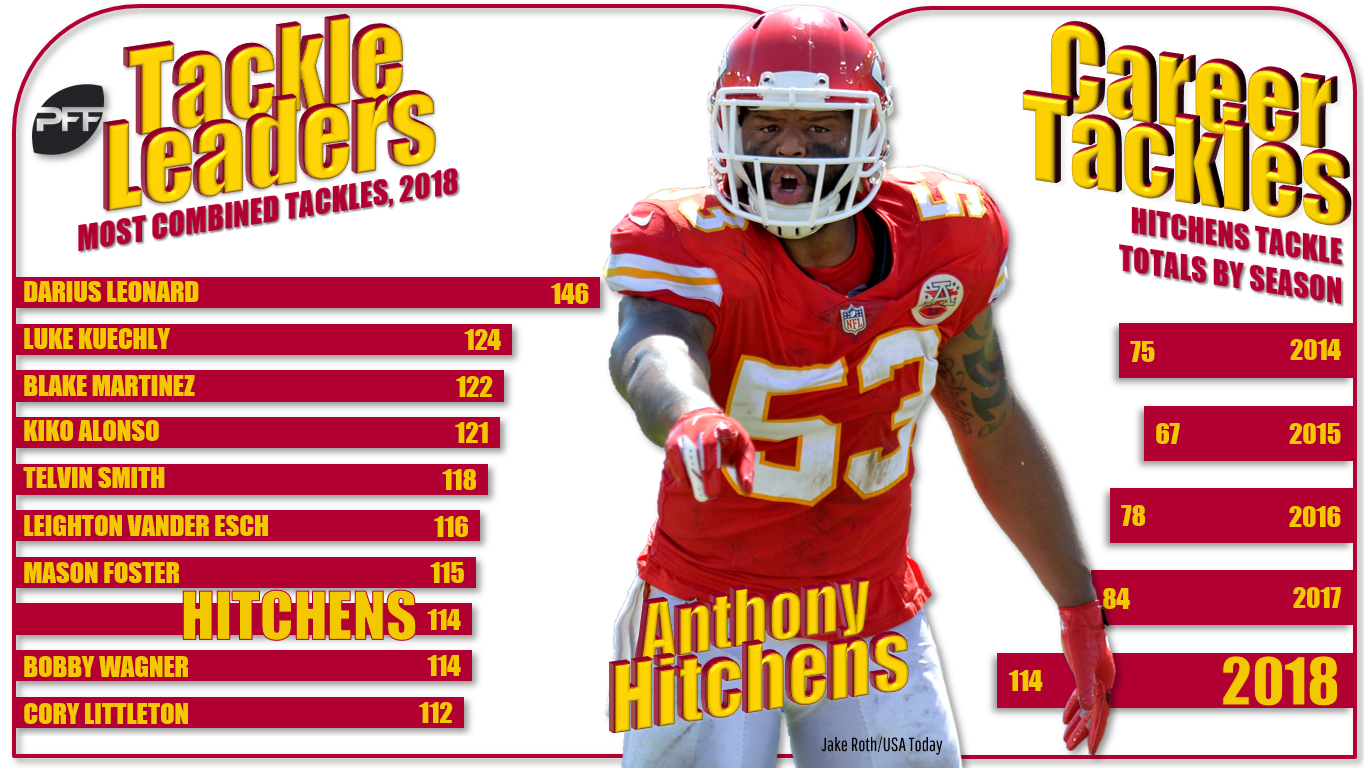 This is a positive matchup for Hitchens to continue to build on the career-high numbers he’s been putting up this season. Hitchens has put up double-digit tackles in two of the past three games and now has reached the plateau six times in 2018. Seattle has been a fantasy-friendly offense to opposing linebackers through 14 games. The Seahawks give up an average of 22 tackles per game to linebackers and have also allowed seven forced fumbles to the position. Last week the 49ers’ linebacker duo of Elijah Lee and Fred Warner combined for 19 total tackles against Seattle.

In what appeared to be a prime matchup against the Texans last week, Williamson came up flat with a paltry 2/2/4 stat line. A part of the reason for the low tackle totals could be that with Lamar Miller (ankle) banged up, the Texans threw the ball a bit more, finishing the game with just 17 rushing attempts. Regardless, Williamson has been trending in the wrong direction, with just nine total tackles in the last two games and zero splash plays in the past four weeks. The Packers are not an offense that is likely to produce a bounceback game for Williamson. On the season Green Bay allows an average of just 17 tackles per game to linebackers.

It’s been an up-and-down 2018 campaign for the second-year linebacker. Despite finishing Week 15 with nine total tackles, Davis also made a pair of crucial mistakes that cost the Lions. Davis failed to hold the edge on Josh Allen’s 3-yard touchdown run and was called for a crucial offsides penalty late in the game that helped Buffalo to run out the clock. Week 16 is likely to be a down week as the Vikings are a tough matchup for linebackers and have not allowed a splash play to the position in the last eight games. When the teams faced off in Week 9 Davis finished with just a solo tackle while playing 49 snaps.

The second-year safety has flourished for the Rams this season and has already posted 105 total tackles. Johnson has also flashed big-play ability with four interceptions and a forced fumble in 2018. Those are top-five fantasy totals, and the matchup this week is a juicy one. The Cardinals offense continues to struggle, having allowed seven splash plays to defensive backs in the last three games. Look for solid tackle totals from Johnson this week as well as at least one splash play.

We love Phillips this week for the same reasons we love the aforementioned Jatavis Brown. In the Week 15 victory over the Chiefs, Phillips played all 60 defensive snaps and finished with double-digit tackles for the first time in 2018. More importantly, Phillips lined up in the box 55 times. Phillips is basically playing linebacker with a defensive back designation against a team that allows linebackers to rack up big fantasy totals. This is a great week for Phillips to flirt with top-10 fantasy production.

It was encouraging to see Berry make his 2018 debut last week and post a decent 4/2/6 statline while playing just 30 of 74 defensive snaps. Parker has had a solid season with 73 total tackles with a sack, two interceptions, and a defensive touchdown. Those are solid DB3 numbers. But the matchup this week does not favor Berry (on an increased snap count) or Parker. In the last three games the Seahawks have allowed just 72 total tackles to defensive backs and zero splash plays.

Things have been trending in the wrong direction over the last month for Mathieu. In the last four games he has managed just 21 total tackles while failing to put up a splash play. The lack of production may partially be due to the emergence of rookie Justin Reid and improved play of Kareem Jackson after moving to safety. The duo has combined for 43 total tackles and a forced fumble in the last four games. It appears there are too many mouths to feed in the Texans secondary and Mathieu can safely be sat in Week 16.