It's the time of year when everyone digs into the upcoming NFL rookie class. Whether you are a film guru, a data grinder or both, countless hours are being put into understanding the strengths and weaknesses of each 2022 NFL Draft prospect.

I have been diving into a sea of new data in the hopes of finding new edges for fantasy football players.

One thing that immediately stood out in this quest is how often the NFL heavily relies on a handful of routes. From 2019 through 2021, 65% of wide receiver targets and yards have come on the hitch, out, crossing, slant, go and in routes.

Understanding this dynamic in NFL passing games, we can gain an additional layer of insight into the upcoming receiver class, focusing on performance across these routes. Using the latest data from Grinding the Mocks (4/23), I selected receivers with an expected draft capital inside the top-200 picks and pulled their yards per route run (YPRR) figures for each of the staple routes over the past four seasons. 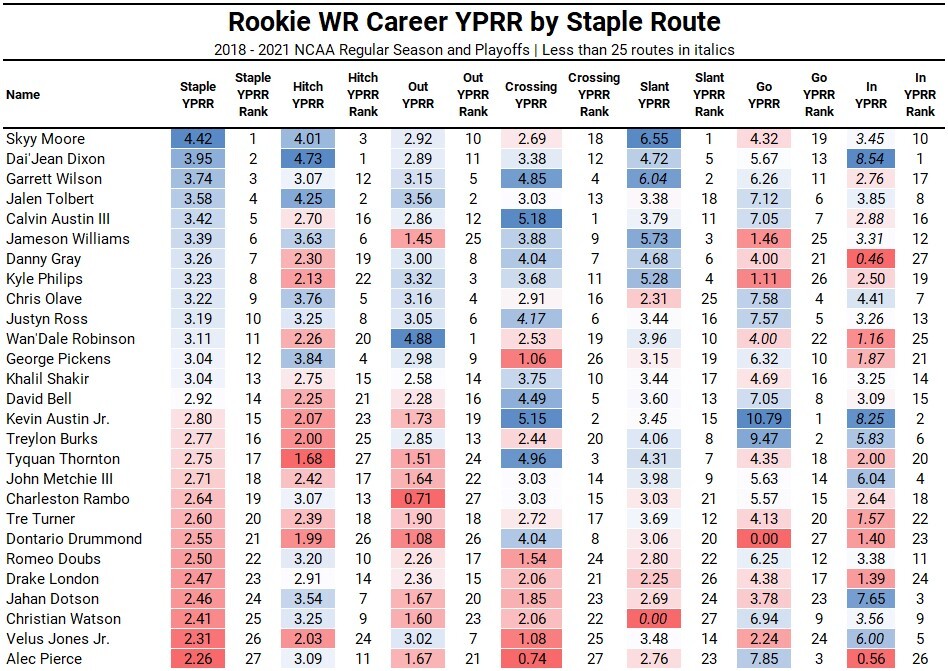 Moore currently ranks inside the top 50 on the PFF Big Board and is the top Group of Five receiver. The Western Michigan product cracked the top-six in two out of six staple routes in YPRR ranks and boasts the No. 3 overall YPRR and No. 1 staple YPRR out of the 27 peers analyzed.

Only Jameson Williams turned a higher percentage of his slant targets into 15 yards or more, but on a smaller sample size than Moore, who saw 49 looks.

One area of concern for the 21-year-old is his modest open rate. He isn't going to win with size in the NFL and grades out well behind Wilson (88%), Olave (81%) and Williams (79%) in generating a step or more of separation on targets. However, separation data at the target level can be noisy, so take it with a grain of salt.

The Buckeye junior ranks No. 3 in staple-route YPRR, and only four others from his peer group posted as many top-six marks as his three (crossing, out and slant). He is hard to deal with on crossing and slant routes, where he ranks fourth and second in YPRR, respectively.

Wilson posted the highest open rate on staple routes (88%), and only one other receiver saw a larger share of their targets come on these patterns. He ranks only 11th in YPRR on hitch routes, but the quick-twitch athlete uncovers as well as anyone with the second-highest open rate.

While Wilson isn't as well-rounded as Olave, he carries the class' second-best explosive rate (15-plus yard plays divided by targets) on staple routes.

Tolbert will be 23 as a rookie, making him one of the older receivers in this year's class. However, he has demanded substantial target shares over the past three seasons — 34%, 31% and 24%. The South Alabama receiver ranks top-six in YPRR in three of six staple route categories, including the No. 2 overall rank on the hitch and out routes.

Our sample size with Williams is small, but he ranks No. 6 in staple route YPRR including top-six marks on hitch and slant routes. He didn't get much playing time at Ohio State but garnered a 22% target share as a 20-year-old junior after transferring to Alabama.

Williams boasts the third-highest open rate (79%) on staple routes and the No. 1 explosive play rate (32%). In addition, he is a menace after the catch, ranking No. 1 in yards after the catch per reception on staple targets.

It would be nice to have a larger sample size, but Williams pops off the page as a potential big-play receiver at the next level.

The Ohio State senior splashed onto the scene as a sophomore at 19 with a 20% target share. He pushed to 29% as a junior but dipped back to 21% while entrenched in a loaded receiving corps in his final season. He ranks No. 9 overall in staple routes, and his breadth of ability is impressive. No other receiver ranks inside the top six in YPRR more than Olave — where he checks three out of six boxes with the hitch, out and go.

Almost half of Olave's targets (47%) came on staple routes where he generated a step or more of separation (open) at the second-highest rate (81%) out of the 24 prospects graded. His best grade (89.6) came on the NFL's favorite route to target — the hitch, where he collected 22% of his looks.

Olave isn't as explosive as some of his rookie peers, but he can work all the routes NFL teams love on day one.

These results are not weighted toward the most recent production — which means Ross' sensational freshman year hits big (4.98 YPRR). With that said, he is one of six receivers in this group to rank inside the top six in three YPRR staple categories over the past four seasons.

Bell posted a monster 27% target share as an 18-year-old in his first season at Purdue. He followed that up with 31% and 24% seasons. Despite his No. 14 YPRR rank on staple targets, he has two top-eight claims (crossing and go routes).

Bell accumulated 55% of his targets on staple looks (third-most) and posted a plus-70.0 PFF receiving grade across all routes. However, he ranks second to last in open and explosive rates, meaning he may not be a regular big-play threat at the next level.

Burks ranks 16th of 27 in YPRR for staple routes but has two top-six ranks and just missed a third (go, in and slant).

The Razorbacks' film matches the inconsistency we see in the data. Burks saw most of his routes from the slot or the backfield in college. Almost 20% of his routes came behind the line of scrimmage on screen, flare, ghost and slide concepts.

Burks has massive potential as a RAC receiver and deep threat but needs to land in the right scheme with a coaching staff willing to get him the ball in space.

Metchie has the No. 18 YPRR rank on staple routes with one top-six mark (in route), but he just missed on crossing and slant routes. However, he ranks third in explosive play rate.

London is one of seven receivers in the group to strike out across the board on a top-six YPRR rank. He has the highest explosive play rate on go routes at 57%, with most of the damage coming in the air. He pops in the data and on film in other ways, such as the back-shoulder go and seam routes, but not in ways that NFL offenses regularly incorporate into their game plans.