Predicting success in the NFL for young wide receivers is an imperfect science to say the least. This is especially true when we consider the receivers taken in the first round of the last five drafts excluding this year. Among this group of 17 players, only three have recorded at least one 1,000-yard season: Amari Cooper, DeVante Parker and D.J. Moore.

As fantasy football players, we face the same challenge, especially in dynasty leagues. The low success rate of Day 1 wideouts shows that draft pedigree really shouldn’t be a major factor in fantasy player evaluation. Instead, we’re going to turn to two commonly used metrics: breakout age and dominator rating. To this dynamic duo of dynasty stats, we’re also going to add in PFF college grades to identify the most likely breakout candidates from the 2020 class.

Dominator rating is a straightforward stat that displays the percentage of team yards and touchdowns a specific player accounts for. The idea is that the higher the number, the more dominant that player was for his respective team. We can look at this stat in terms of single-season or career. For the purposes of identifying the players most likely to find sustained success, career dominator rating gives us a better view of a player’s potential.

Tyler Johnson was off-the-charts in this metric over the course of his career, but let’s not get too carried away. Sure, Johnson’s rating was nearly double Jerry Jeudy’s (22%), but Johnson didn’t have the competition for touches in Minnesota that Jeudy did at Alabama. Still, we typically want to see players fare well in this metric. For example, despite being picked 57th overall by the Rams, Van Jefferson’s career mark of 18% doesn’t bode well for success at the next level.

In turn, breakout age refers to how old a player was when he had his first 20-plus percent dominator rating. Typically, breakout age is calculated by how old the player was at the start of the season. In looking at this year’s class, here are the youngest players in terms of breakout age:

Edwards leads the pack at just 17.8 years old when he posted a 27% dominator rating as a true freshman at South Carolina. In his four seasons with the Gamecocks, he was never below 23% and posted a whopping 40% rate in 2019. You’ll also notice that four of the six wide receivers selected in the first round of this year’s draft appear on the list (Reagor, Jefferson, Jeudy and Lamb). Of the remaining two first rounders, Henry Ruggs was lightly used in college and never actually posted a breakout year. As for Brandon Aiyuk, his breakout age of 21.4 is a bit deceiving because he spent two years at the JuCo level before playing for Arizona State.

The key point to take away from breakout age is that being able to produce at a young age at the college level typically bodes well for future success. That being said, like dominator rating, it’s far from the be-all, end-all statistic.

However, there is one more variable we can introduce to this dynasty equation: PFF grade. Our team of analysts has graded every snap of this year’s rookies for their entire career, and all of that data can be distilled down into a career college grade. For wideouts, we can hone in on their career receiving grade. Unlike dominator rating, more mouths to feed won’t impact the player’s grade — it's all about their individual performance on the field. So, looking at career grade and dominator rating can give us a unique view of this year’s class that combines the best of both worlds. 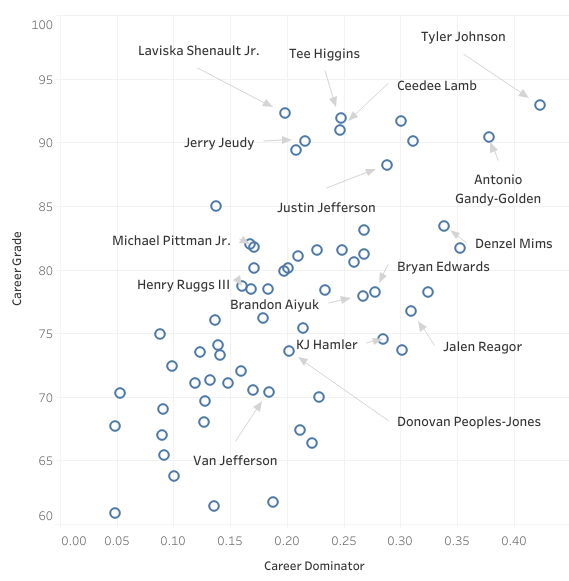 In combining PFF college receiving grade with career dominator rating, we get a very interesting picture of this year’s class. Johnson continues to stand out with the top combined dominator rating and grade, but we also see some of the top prospects in the class rise to the top with both CeeDee Lamb and Jerry Jeudy among the top-graded players. Their impressive play and 20-plus percent dominator ratings have them poised to hit the ground running in the NFL.

Jeudy’s college teammate Henry Ruggs will be an interesting case study in how effective these numbers are in predicting future success. Ruggs was lightly used at the college level and doesn’t necessarily pop from a grades standpoint. However, his world-class speed helped propel him up the draft board, and he ended up being the first wideout selected. History has shown us that draft spot doesn’t necessarily correlate to future fantasy success. With the above metrics not painting the most favorable picture, it’s wise to be cautious when considering Ruggs in dynasty startups.

On the opposite end of the spectrum, we have a player like Antonio Gandy-Golden. Sure, his domination can certainly be attributed in part to playing against inferior competition compared to some of his peers who come from Power-5 schools, but Gandy-Golden’s career receiving grade stands out (he was also one of the youngest breakout players in this year’s class). Better yet, you won’t have to pay a premium for him in dynasty. Based on the metrics, he’s an intriguing target later in rookie drafts.

Perhaps the most glaring player on this chart is Van Jefferson. The Florida product never recorded a season with over a 20% dominator rating and also graded out somewhat poorly in comparison to his peers. While Jefferson landed in a decent spot on a thin Rams depth chart, the metrics don’t bode well for him having success at the pro level.

There’s no perfect metric for predicting future fantasy success, but the methodology above cuts through some of the static and shows how these players stack up against each other. Incorporating PFF grades provides an extra level of depth to dominator rating and breakout age to help us identify the top breakout candidates in this year’s rookie class.