Week 15 breakout candidates and guys who could exceed expectations

BALTIMORE, MD - SEPTEMBER 17: Tight end Benjamin Watson #82 of the Baltimore Ravens makes a catch in front of cornerback Jamar Taylor #21 of the Cleveland Browns during the first half at M&amp;T Bank Stadium on September 17, 2017 in Baltimore, Maryland. (Photo by Patrick Smith/Getty Images)

We have just three weeks left of the regular season, so by now, barring some late-season injuries (hopefully no more), we know which players are making the most of their opportunities and where defenses are flawed. Matchups are among the most important things in fantasy, and finding out where the per-opportunity matchups are ripest can be fruitful.

Here is the PPO against data through Week 14: 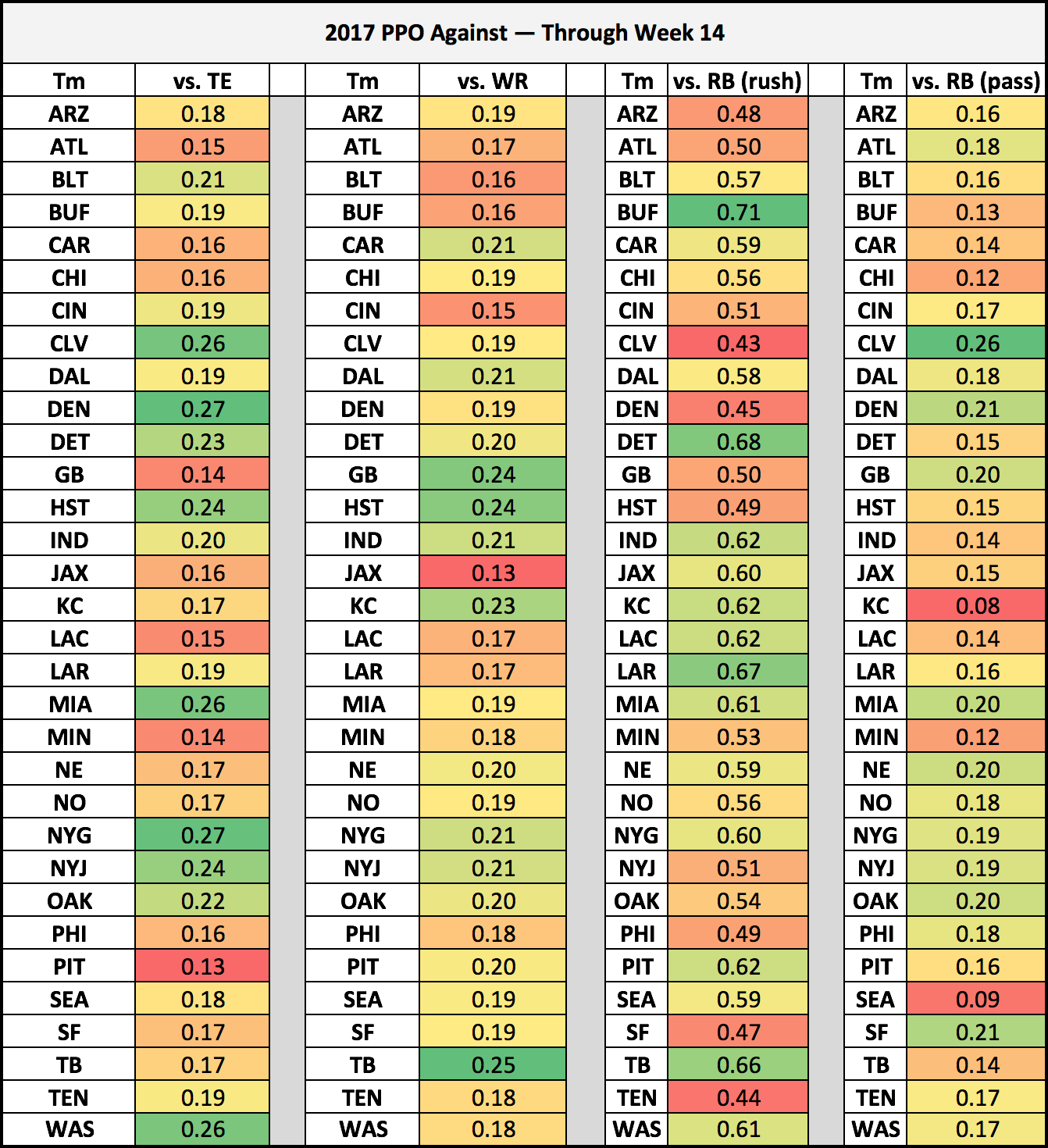 Below some players that are prime to break out in Week 14, according to the PPO data. (To see individual player PPO scores on a weekly or season-long basis, check out the Fantasy Stats section in our Tools lab.)

Kenyan Drake has been knocking on the door with two straight weeks with more than 100 rushing yards. This is the week he knocks the door down with a potentially massive game. The Bills have given up the most fantasy PPO to opposing running backs this year — and it’s not particularly close.

This is a blowup spot for LeSean McCoy against the Dolphins, who have given up the ninth-most fantasy PPO to opposing running backs on the ground and the fourth-most PPO through the air.

This is a Melvin Gordon week. The Chiefs have given up the sixth-most PPO on the ground to opposing running backs this year. Gordon posted 4.6 YPC against the Chiefs back in Week 3 — his third-highest YPC total of the season.

The month of Dede Westbrook will continue in Week 15 against the Texans, who have given up the third-most PPO to opposing receivers so far this year. Westbrook’s 0.43 individual PPO is tied with Jarvis Landry and Davante Adams.

Jordy Nelson since Aaron Rodgers got hurt: A combined 22-153-0 in seven games. Nelson obviously won’t catch 22 passes in a game, but if he matches/passes that yardage total in just one game with Rodgers back in town — and secures a touchdown — nobody would be surprised. The Panthers have given up the seventh-most fantasy PPO to opposing receivers this year.

Keenan Allen’s hot streak? Yeah, it’s not going anywhere. He should top 100 yards again in Week 15 against the Chiefs, who have given up the fourth-most fantasy PPO to receivers this year. Allen’s 0.51 PPO ranks fourth at the position.

Demaryius Thomas and Emmanuel Sanders are in good spots on Thursday night against the Colts, who have given up the fifth-most fantasy PPO to enemy receivers this year. Thomas will see primarily see Quincy Wilson in coverage; Wilson has only covered 70 pass routes against this season. Sanders will primarily see Kenny Moore in coverage; Moore has only defended 87 pass routes this year.

Do you believe in Benjamin Watson? Well, you probably shouldn’t believe too much, but the matchup is ripe against the Browns, who have given up the third-most fantasy PPO to opposing tight ends this year — a position they’ve now struggled to defend for years.

New York Giants versus tight ends: Most PPO given up. Philadelphia Eagles tight ends: Trey Burton (first), Zach Ertz (sixth) both have top-10 individual PPO seasons thus far. Even without Carson Wentz in the lineup, these puzzle pieces are lining up.

If you need a tight end this week, you should give Ricky Seals-Jones some thought. The Redskins have given up the fifth-most fantasy PPO to opposing tight ends this year, and while Seals-Jones still doesn’t see quite enough playing time (27.7 percent was his season-high), when he is on the field, he does damage. Among all tight ends who have at least five receptions this year, Seals-Jones ranks first in individual PPO.

Jason Witten gets the Raiders in Week 15, and Oakland has ceded the ninth-most fantasy PPO to opposing tight ends this year. Oakland has given up at least 50 receiving yards to tight ends in all but two games this year.