MINNEAPOLIS, MN - DECEMBER 1: Adrian Peterson #28 of the Minnesota Vikings takes the field against Chicago Bears on December 1, 2013 at Mall of America Field at the Hubert Humphrey Metrodome in Minneapolis, Minnesota. (Photo by Adam Bettcher/Getty Images)

In last week’s Narrative Street article, we explored whether or not wide receivers really do break out in their third season. This week’s article will explore a sort of inverse narrative for the running back position: Does running back production actually fall off a cliff once they reach age 30?

Let’s find out if that’s true.

The narrative: Fantasy football players should avoid running backs over the age of 30.

I took a look at all running backs who had at least 30 rushing attempts between 2010 and 2016 for this study. Their age was rounded to the nearest year as of the first game of the season.

When breaking down the number of players who meet these criteria by age, we find a predictable trend line: 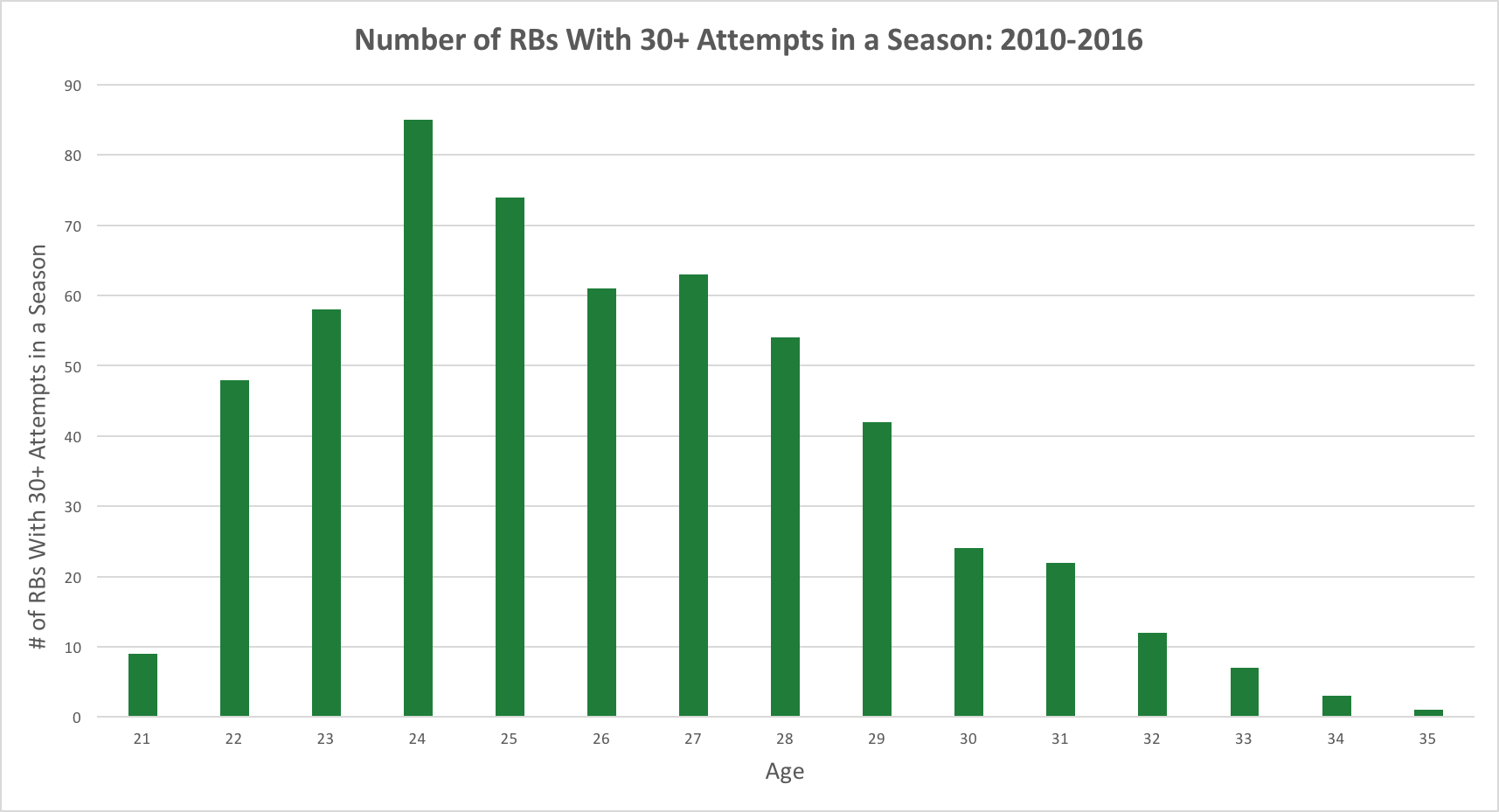 24- and 25-year-old running backs get the most opportunity. And similar to what we discovered in our wideout study, once a running back reaches the age of 26-plus — roughly their fourth year in the league — they have either carved a role for themselves, or they haven’t (i.e. they are either still in the league, or they aren’t).

What about efficiency? Let’s take a look at the average yards per carry of these running backs: 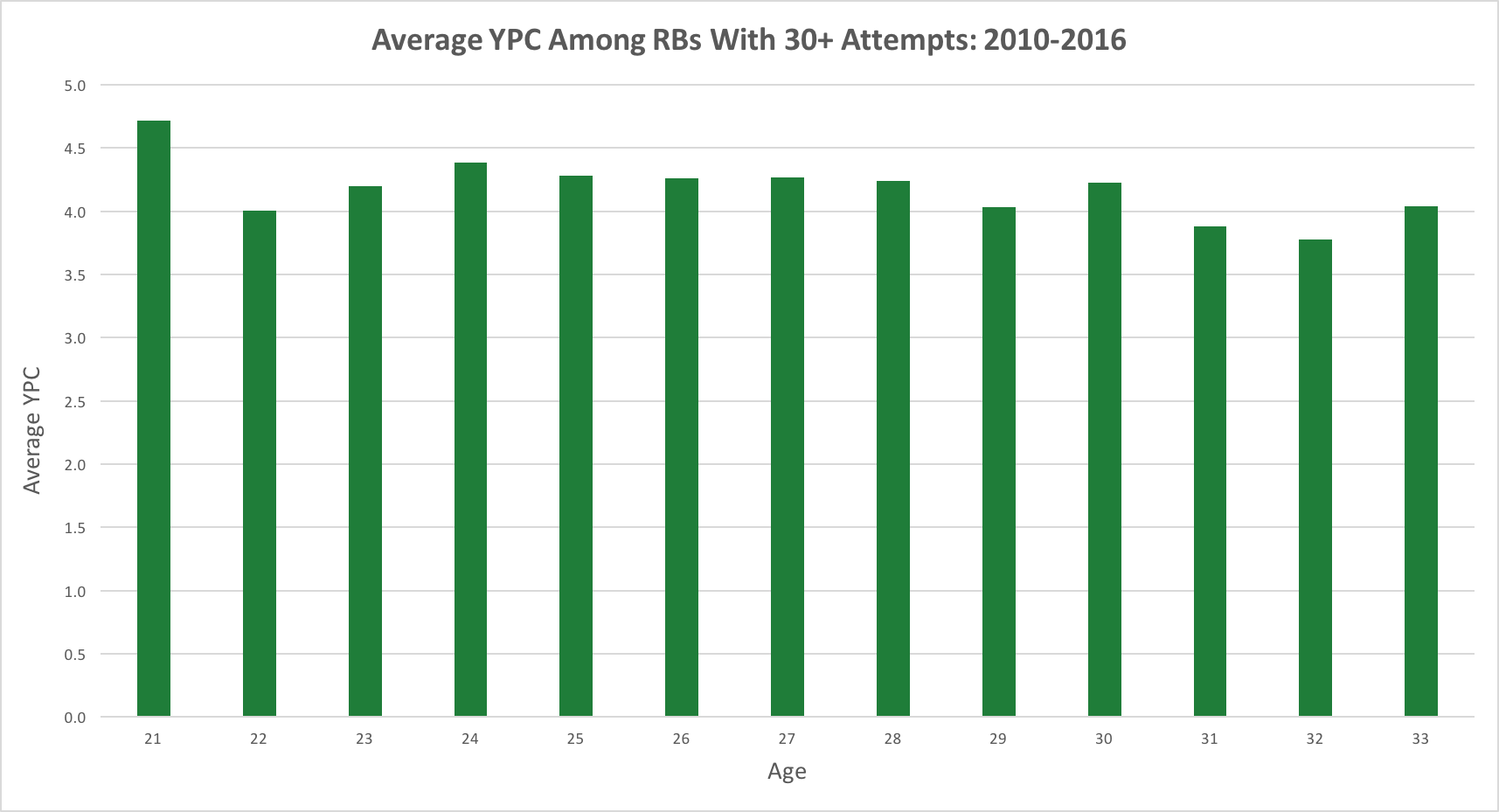 Ignoring the 21-year-olds — Ezekiel Elliott was incredibly good as a rookie and he seriously skewed that data all by himself — we see that running backs not named Elliott typically reach their peak YPC efficiency by age 24.

Of note, however, is that running backs maintain a similar level of YPC efficiency through their age-30 season. The significant drop comes in the age-31 season — that’s the first time running backs dip below 4.0 YPC.

Running backs aged 30 also face more durability questions than their younger counterparts. But the reality is, these questions might be misguided. 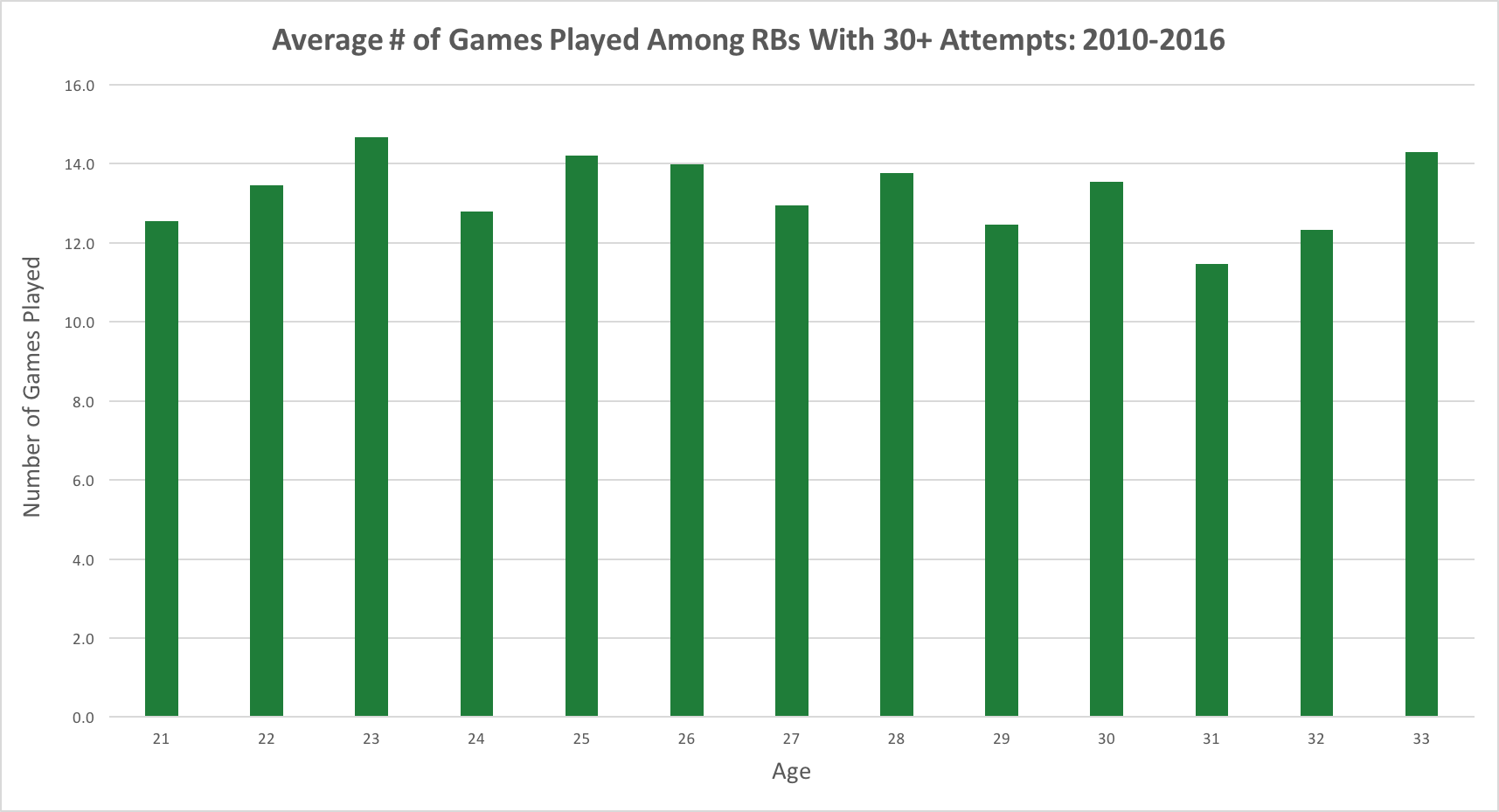 Once again, we see that 30-year-old running backs typically play a similar amount of games to their 20-something counterparts. And again the true noticeable drop off comes at age 31. The spike for aged-33 running backs can be explained by small sample size (i.e., the ones that can’t handle that many games typically don’t even have jobs by that age). However, it does show that even running backs in the final stages of their career can be durable. They are playing at age 33 for a reason.
A final chart will show the only question that ends up mattering to fantasy football players: How many points did they score? 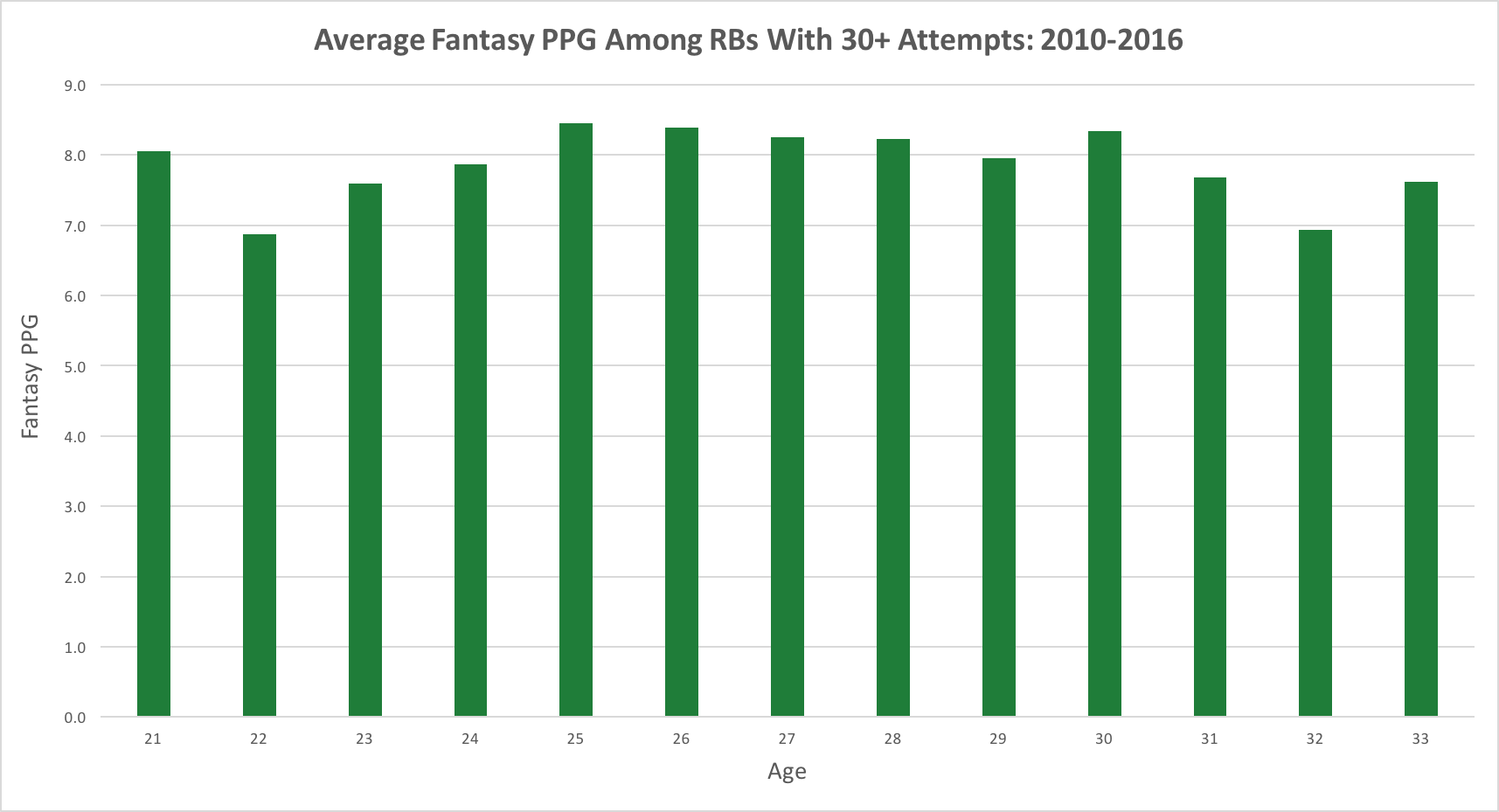 On a fantasy points per game basis, there is no dropoff for running backs in their age-30 season. Again, the dropoff noticeably begins during the age-31 season.

A few notes on sample sizes

So far, the data seem to suggest that running backs entering their age-30 year do not need to be avoided. Typically, running backs see no significant drop in efficiency once they turn 30.

However, there are two sample-size notes that need to be made. We already covered one with the first chart in this article: There are fewer older running backs, so the sample sizes aren’t uniform across ages.

The other factor that needs to be highlighted is the 30-carry minimum I imposed for this study. I also reviewed the data for running backs who met a 150-attempt minimum to see if that made any big difference, since this would obviously include more fantasy-relevant players.

I was expecting to find a sizable difference, but I didn’t. I won’t run through all of the charts again, but here are the quick-hit versions. You can click through to see the charts in full:

To reiterate what I said at the start: I am not advocating for you to draft older running backs. We just wanted to explore how much truth belonged to the age-30 narrative.

The data indicates that while the “age 30” running back narrative is close to accurate, it’s off by a year on either end of the spectrum, depending on what type of running back you are talking about. Age-30 running backs might be nearing the end of their careers, but that doesn’t mean they can’t still produce for your fantasy squad.