Metrics that Matter: All aboard the Carlos Henderson train

MIAMI, FL - OCTOBER 22: Carlos Henderson #1 of the Louisiana Tech Bulldogs in action against Treyvon Williams #52 of the FIU Panthers during the game at FIU Stadium on October 22, 2016 in Miami, Florida. (Photo by Rob Foldy/Getty Images)

On Tuesday I briefly mentioned my process for scouting college prospects. With each prospect, I’ll spend hours looking at tape, statistical production, and athletic measurables. Athletic measurables are typically the thing I’m concerned least with. On Tuesday, we highlighted one such statistic – Speed Score or the weight-adjust 40-yard dash. Today, we’ll talk about two of my favorite production-based statistics for wide receivers, and the incoming rookie who dominated them.

At PFF, we chart and grade every player in every game on every play. One of the many perks of my job is that I’m allowed access to this data and to unique statistics no one else has – or rather data that only fellow PFF employees and subscribers have access to. One such metric is missed tackles forced per reception – how many missed tackles a player forces per catch.

Yards after the catch per reception

This shouldn’t come as a surprise, considering how highly Kelce has ranked in this statistic throughout his career. Kelce has three seasons under his belt with at least 75 targets. Since 2007, there are 709 instances of a wide receiver or tight end seeing at least 75 targets in a single season. All three of Kelce’s qualifying seasons rank top-15 in yards after the catch per reception this past decade, and he’s improved each year.

Louisiana Tech wide receiver Carlos Henderson was drafted by the Denver Broncos in the third round of the NFL draft. I remember this fondly, because I already had several shares of Henderson in dynasty leagues, I loved the landing spot, and I shrieked in excitement like a little kid when he was selected higher than most anticipated.

I have so many dynasty shares of Henderson, mostly because of how efficient he was in both of these statistics last season. Denver’s wide receivers coach Tyke Tolbert seems to be aware of this as well, saying, “his run after the catch, making guys miss, was the best in college football.”

Although strength of schedule is something that isn’t factored into this data, and the competition in the C-USA division isn’t particularly strong, he did dominate statistically by such a degree that it’s almost shocking.

Henderson was no slouch in terms of yards after the catch per reception (9.57) either, ranking behind only Biletnikoff Award winner Dede Westbrook last season.

When looking at both metrics, Henderson appears to be in a league of his own.

Over the last three seasons, there are 186 instances of a wide receiver recording at least 100 targets in a single season. Henderson’s 2016 season is the one all the way at the top right. 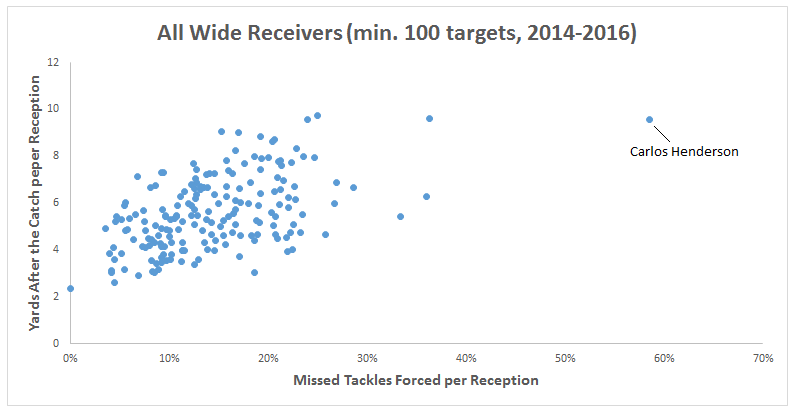 Of course, Henderson also ranked highly in a number of more traditional metrics. He led the league in touchdowns last season (19, tied with Corey Davis) and ranked sixth in receiving yards (1,530). He ranked seventh-best among all 149 wide receivers with at least 75 targets last season in yards per route run (3.55), 11th-best in yards per target (11.17), and 28th-best in drop rate (4.65.) He never fumbled in his college career. He was also our highest-graded kick returner last season, returning two kicks for touchdowns and ranking third-best in average kick return (32.3) among all 77 players with at least 20 kick returns.

Over the last two seasons, Emmanuel Sanders and Demaryius Thomas each saw at least 130 targets, with the next-closest Denver receiver coming away with fewer than 35. This season, Mike McCoy replaces Rick Dennison as offensive coordinator in Denver, which could mean a more egalitarian target distribution going forward. Throughout their careers as offensive coordinators, Dennison's WR3 (by fantasy points per game) averaged only 4.3 fantasy points per game, while McCoy’s WR3 averaged 7.4. Still, I think it’s unlikely Henderson is a serious fantasy contributor in his rookie season, but he is one of my favorite dynasty stashes (ADP player No. 37 in rookie drafts).