How fantasy owners should handle a Julian Edelman suspension

PED suspensions have become old hat in the NFL, but Julian Edelman’s case offers an uncharacteristic level of intrigue. Dan Graziano of ESPN reported that Edelman’s appeal defense from last week centered on two points. First, the drug that led to the failed test went unrecognized in the testing. Second, the NFL may have broken from protocol in the handling of documentation and delivery of the test results. The NFL appeals process is a black box, so it seems impossible to know whether Edelman will become the NFL version of Ryan Braun — hopefully without the lying part — whether he will serve the full suspension, or whether he will end up with a shorter sentence. For me, that uncertainty calls for a detailed consideration of his fantasy value.

Edelman’s fantasy case has more layers than even his appeals case does. A basic examination would be of his total projected points. Based on a full season of play, PFF projects Edelman to score 213 PPR points, which slots him in as the No. 23 receiver, behind Josh Gordon and ahead of Emmanuel Sanders. Drop that to 15 games, and Edelman projects for 200 points. That would make him the No. 29 receiver between Pierre Garcon and Michael Crabtree. Drop it to 14 games, and Edelman would have 186, good for 32nd, between Randall Cobb and Corey Davis. Over 13, he would have 173 and would be the No. 39 receiver between Jamison Crowder and Devin Funchess. And with the full four-game suspension, it would just be 160 points. He would barely crack the top-50 at the position (47th) and would fall among players like Rishard Matthews and Marquise Goodwin, who will likely be unowned in plenty of shallower leagues.

If it feels like an overreaction to drop Edelman from 23rd at the position to 47th and not even worth owning, I agree with you. Traditionally, I have expressed that belief with a valuation that includes a replacement-level player. That’s because Edelman’s fantasy owners won’t receive zeroes in whichever games he misses. They will have the ability to substitute a player, and that player should be no worse than the best freely available receiver on the waiver wire.

The estimated production of a replacement-level player depends on the specifics of leagues. For explanatory purposes, let’s just assume they fall in that Matthews/Goodwin range — which I expect would be the case in a typical 10-team league. Those two project to score in the ballpark of 10 PPR points per game. Replace Edelman’s zeroes with 10 points in his missed games, and his fantasy schedule looks much more promising.

Even in the worst-case scenario of a four-game suspension, Edelman remains in the top-30 at the position and is a must-draft player. And that jibes with Edelman’s WR29 ranking in consensus season-long ADP.

That back-of-the-envelope calculation is plenty accurate to make reasonable fantasy judgments. Notice how the valuation with a replacement level is much less sensitive to missed time than a total points evaluation. That means that if I’m a little off with my estimate of the replacement level or even incorrect in however many games I project Edelman to miss with his suspension, I won’t miss the mark by more than a few spots in the rankings.

Still, I can’t help but feel that abstraction is a bit too idealized to accurately capture Edelman’s value for people in the real (fantasy) world. To illustrate, imagine if Edelman’s case follows a similar path to Ezekiel Elliott’s from last year. A four-game suspension costs Edelman owners the same (13.3 x 4) points whether it is served in September or December, but the replacement estimate will not be so steady in practice because of the bye weeks. 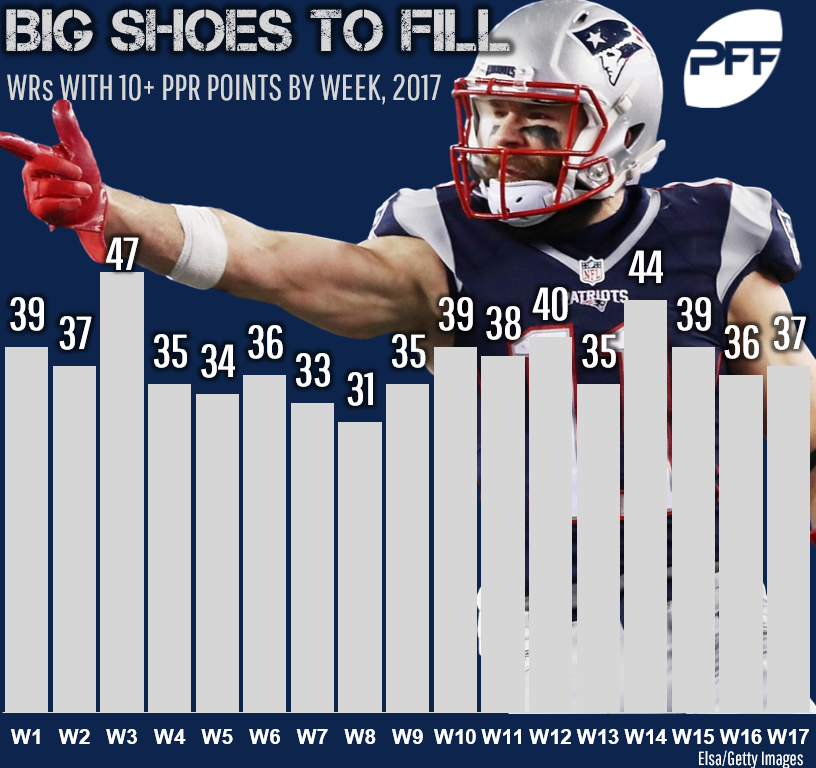 It isn’t perfectly clean, but you can still visually see that the number of wide receivers who scored at least 10 PPR points dipped in the middle weeks of the 2017 season when teams were on bye. I stretched that back an extra year to get bigger samples, and the results show that weeks with four or six teams on bye have about four fewer receivers reach 10 PPR points than weeks without byes. 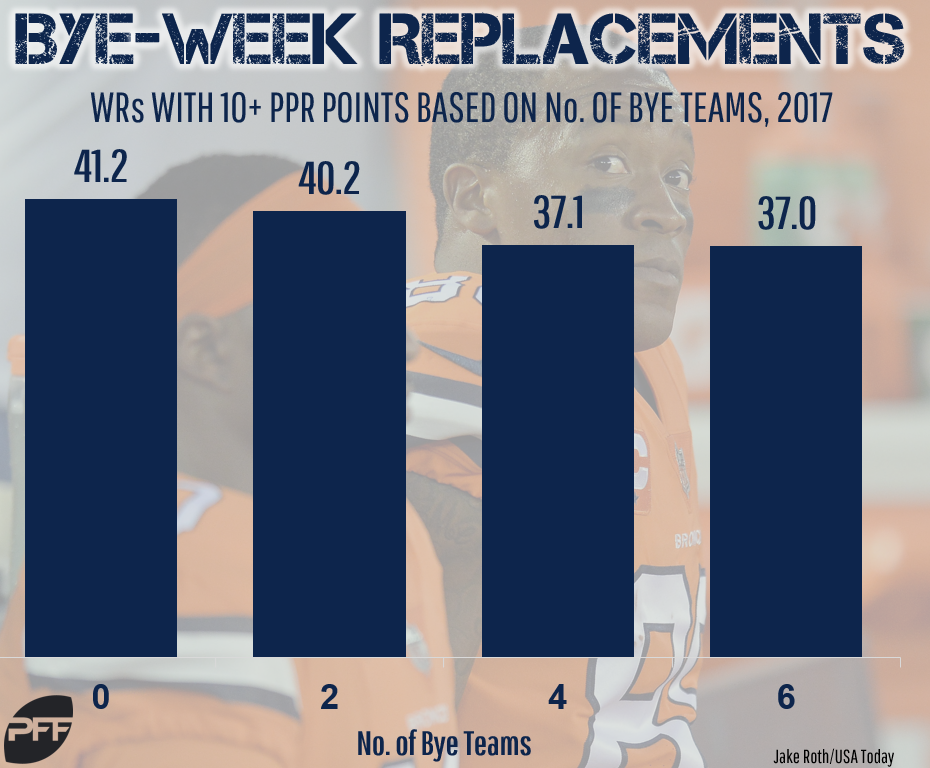 The impact of that next level of replacement projection is minimal for Edelman. If his four-game suspension was upheld but pushed to a different part of the season, he would be projected to lose no more than three fantasy points because of that timing. But that wouldn’t universally be the case. In a deeper format or at a position like tight end with a steeper decline in fantasy scoring by positional rank, the timing of a suspension or injury could flip the rest-of-season rankings of players. It could even tip the scales of your willingness to drop or trade your suspended or injured player.

Edelman owners don’t have much to lose from the potential timing of his suspension but could gain much more if his suspension is reduced or eliminated. They may even be able to substitute the under-drafted Jordan Matthews to overachieve on the general replacement level in whatever weeks Edelman misses — since his role in a Tom Brady offense is no small part of Edelman’s typical fantasy value. To me, that makes Edelman’s WR29 ranking more of a floor than an expected value. Aim to snag him as your third receiver or primary flex option and trust your abilities as a manager to fill in the gaps, when or if they come.