It’s Wednesday and that means it’s time to breakout the flex fantasy football rankings for Week 6 of the 2019 NFL season. If you’re new to the concept of flex rankings, these are simply the combined overall rankings for running back, wide receiver, and tight end for each week during the fantasy football season. Remember that rankings change throughout the week, so be sure to check our staff rankings for updates. 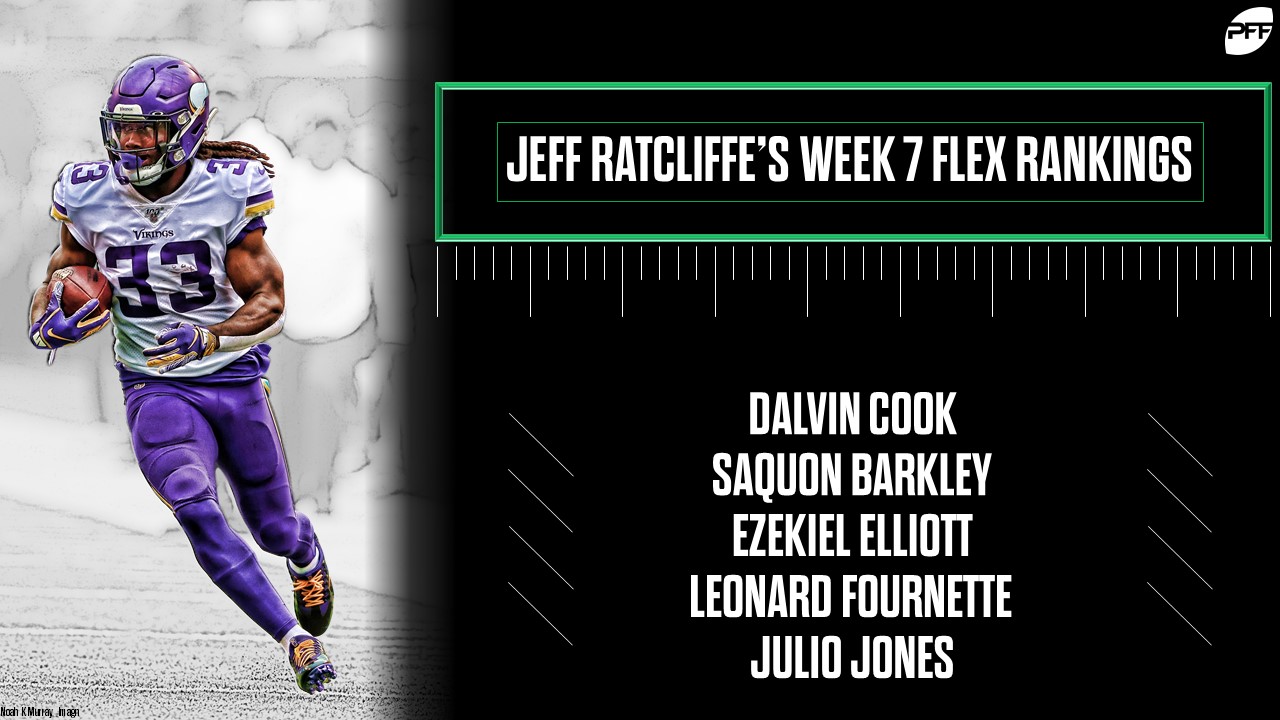 1. Dalvin Cook, MIN @ DET (RB1) — Cook is coming off a tough matchup against Philly, but he bounces back against the fantasy-friendly Lions run defense.

2. Saquon Barkley, NYG vs ARI (RB2) — Barkley should return this week and is right back up in elite fantasy territory.

4. Leonard Fournette, JAC @ CIN (RB4) — This week's fantasy cheat code goes to Fournette, who is also second in the league in touches per game.

5. Julio Jones, ATL vs LAR (WR1) — The Rams secondary underwent a seismic shift this week, and it still isn't clear if Jalen Ramsey will be on the field. If he is, we'll downgrade Jones to mid-WR1 territory.

6. Alvin Kamara, NO @ CHI (RB5) — Kamara is a dealing with an ankle injury, so keep an eye on his status this week.

7. Chris Carson, SEA vs BAL (RB6) — Only Christian McCaffrey has seen more carries through the first six weeks of the season.

8. Travis Kelce, KC @ DEN (TE1) — A big game is bubbling right near the surface for Kelce.

9. David Johnson, ARI @ NYG (RB7) — Johnson hasn't been the most efficient back this season, but his healthy workload keeps him locked in as a mid-range RB1.

10. DeAndre Hopkins, HOU @ IND (WR2) — He may not have had the biggest fantasy day last week, but Hopkins did rack up 12 targets.

11. Cooper Kupp, LAR @ ATL (WR3) — Look for the entire Rams offense to bounce back in a plus matchup against the Falcons this week.

12. Le'Veon Bell, NYJ vs NE (RB8) — Bell won't have a lot of room to operate as a runner in this one, but his role in the passing game bodes well for volume.

13. Michael Thomas, NO @ CHI (WR4) — His yards per catch may not jump off the screen, but Thomas is on pace for over 140 receptions this season.

18. T.Y. Hilton, IND vs HOU (WR7) — The Colts return from bye and Hilton should be good to go. He showed a solid connection with Jacoby Brissett earlier this season.

19. Tyler Lockett, SEA vs BAL (WR8) — Lockett enters the week in the top 12 of both receptions and receiving yards.

21. Adam Thielen, MIN @ DET (WR9) — After a rough start to the season, Thielen has rebounded in a big way over the last two weeks. He's racked up six end-zone targets over that span.

22. Phillip Lindsay, DEN vs KC (RB12) — While the Broncos are still using a committee in their backfield, Lindsay has put some distance between himself and Royce Freeman as the preferred fantasy option.

23. Julian Edelman, NE @ NYJ (WR10) — Edelman has had a drop issue this season, but his heavy target volume places him at the back end of the WR1s this week.

24. Michael Gallup, DAL vs PHI (WR11) — With Amari Cooper banged up, Gallup is in a prime spot to produce against the suspect Eagles secondary.

30. Larry Fitzgerald, ARI @ NYG (WR16) — The veteran has cooled off after his hot start to the season, but this is a big-time matchup upgrade for Fitzgerald.

37. Stefon Diggs, MIN @ DET (WR21) — Diggs was a fantasy rock star last week, but Detroit's secondary is a much tougher task than Philadelphia's.

48. Carlos Hyde, HOU @ IND (RB22) — Hyde will see plenty of volume in the right gamescripts, but his limited upside keeps him in RB2 territory.

60. Todd Gurley, LAR @ ATL (RB28) — Gurley sat out with a quad injury last week and is far from a lock to suit up this week. Have Malcom Brown and Darrell Henderson on standby.

69. Robby Anderson, NYJ vs NE (WR31) — Anderson exploded last week, but be careful. This is a very tough matchup for the Jets receiver.

79. Frank Gore, BUF vs MIA (RB34) — Yes, the matchup is excellent, but Gore's minimal fantasy upside still keeps him outside of the RB2s.

104. Latavius Murray, NO @ CHI (RB40) — With Alvin Kamara dealing with an ankle injury, it's a good idea to stash Murray.