It’s Wednesday and that means it’s time to breakout the flex fantasy football rankings for Week 5 of the 2019 NFL season. If you’re new to the concept of flex rankings, these are simply the combined overall rankings for running back, wide receiver, and tight end for each week during the fantasy football season. Remember that rankings change throughout the week, so be sure to check our staff rankings for updates. 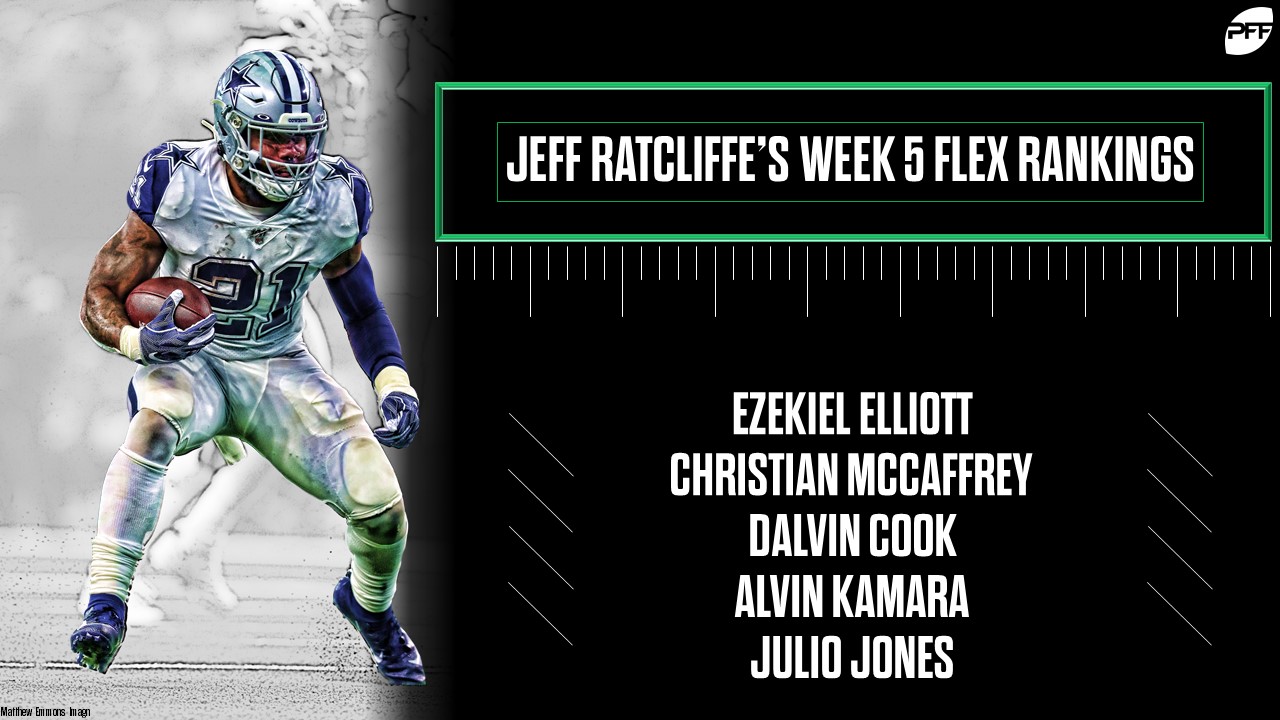 1. Ezekiel Elliott, DAL vs GB (RB1) — It wasn't the most efficient performance from Elliott last week, but he still managed borderline RB1 numbers.

2. Christian McCaffrey, CAR vs JAC (RB2) — Don't expect 37 touches again, but the Panthers are going to continue to run through McCaffrey

3. Dalvin Cook, MIN @ NYG (RB3) — Cook is coming off a tough matchup against the Bears. He bounces back in a big way this week.

4. Alvin Kamara, NO vs TB (RB4) — The Bucs are good against the run, but Kamara can also get it done as a receiver.

5. Julio Jones, ATL @ HOU (WR1) — Johnathan Joseph is tied for the league lead in catches allowed with 24. So, yeah, Jones is going to eat this week.

9. Keenan Allen, LAC vs DEN (WR3) — In his last two meetings against the Broncos, Allen tallied 13 catches on 19 targets for 153 yards and a score.

12. Michael Thomas, NO vs TB (WR4) — Thomas doesn't have as much upside with Teddy Bridgewater under center, but he still managed nine catches for 95 yards last week.

19. Mike Evans, TB @ NO (WR9) — While Godwin has pulled ahead of Evans in rankings, we still like Evans as a top-10 play following last week's offensive explosion from the Bucs.

21. Tyler Lockett, SEA vs LAR (WR10) — The Rams secondary just got torched by Tampa, so we're upgrading Lockett this week.

22. Mark Ingram, BAL @ PIT (RB11) — The Ravens draw a tough matchup on the road, but Ingram has shown that he can produce in suboptimal situations.

24. James Conner, PIT vs BAL (RB12) — Conner tweaked his ankle Monday night, so keep a close eye on his status.

25. Joe Mixon, CIN vs ARI (RB13) — Mixon continues to see a healthy workload and should have some room to run in this matchup.

28. Larry Fitzgerald, ARI @ CIN (WR14) — The Bengals secondary got exposed Monday night, so look for Fitzgerald to put up a solid fantasy week.

35. Austin Ekeler, LAC vs DEN (RB19) — Even with Melvin Gordon back, we're still comfortable with rolling Ekeler out as an RB2 option.

78. Ronald Jones II, TB @ NO (RB31) — Jones was a priority add this week, but it's still too early to trust him as anything more than a flex play.

112. Tyler Eifert, CIN vs ARI (TE12) — If you're looking for a tight end to stream, Eifert is your guy. This is a fantastic matchup against the Cards.