It’s Wednesday and that means it’s time to breakout the flex fantasy football rankings for Week 3 of the 2019 NFL season. If you’re new to the concept of flex rankings, these are simply the combined overall rankings for running back, wide receiver, and tight end for each week during the fantasy football season. Remember that rankings change throughout the week, so be sure to check our staff rankings for updates. 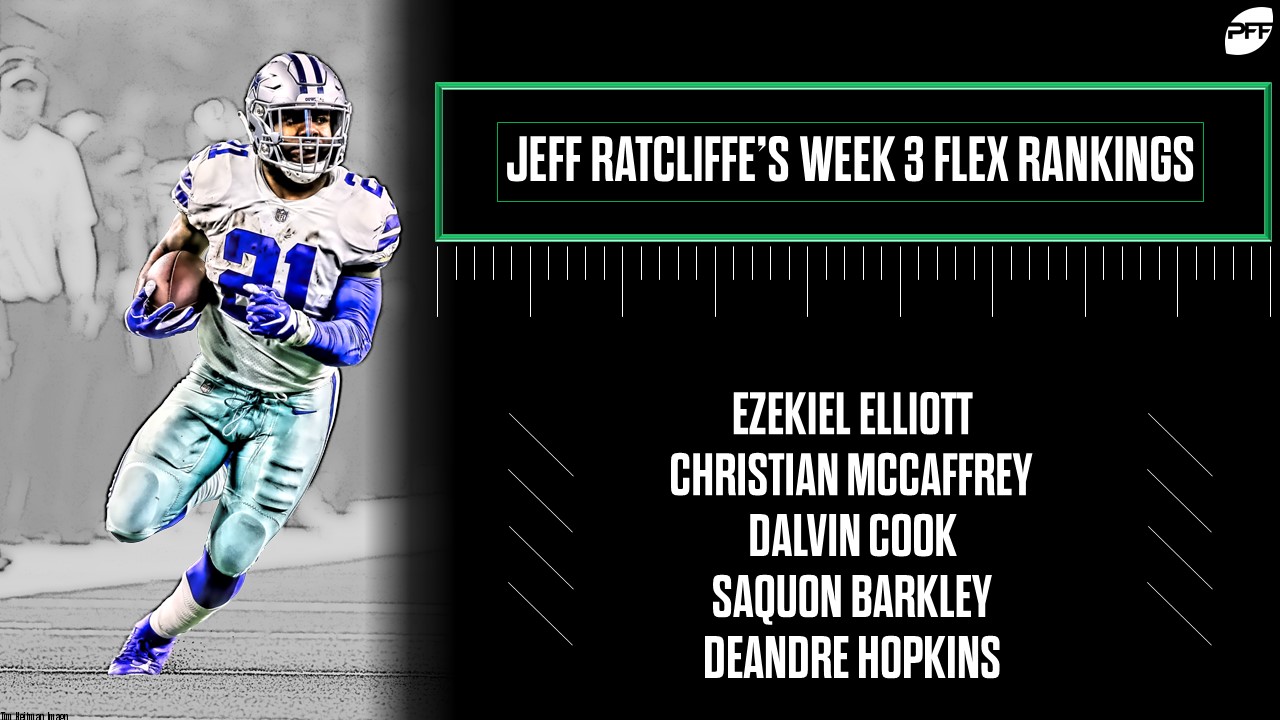 1. Ezekiel Elliott, DAL vs MIA (RB1) — The Cowboys are 21-point favorites against a putrid Dolphins team. Elliott is going to eat this week.

2. Christian McCaffrey, CAR @ ARI (RB2) — Don't worry about last week. McCaffrey bounces back in a big way against the Cards.

3. Dalvin Cook, MIN vs OAK (RB3) — The breakout season continues at home against the Raiders.

4. Saquon Barkley, NYG @ TB (RB4) — As bad as the Giants have been, Barkley is still getting his.

6. Nick Chubb, CLE vs LAR (RB5) — Chubb has been one of the league's high-volume running backs, and that continues this week.

8. David Johnson, ARI vs CAR (RB6) — With Cam Newton banged up, Johnson should benefit from a positive gamescript this week.

9. Alvin Kamara, NO @ SEA (RB7) — This is far from an optimal matchup, but Kamara still figures to see a full workload this week.

10. Chris Carson, SEA vs NO (RB8) — We saw a little more Rashaad Penny last week, but Carson is still in play as an RB1 in a favorable spot.

11. Odell Beckham Jr., CLE vs LAR (WR3) — Beckham flashed his big-play ability on Monday night and gets another primetime game this week.

12. Davante Adams, GB vs DEN (WR4) — Adams bounced back with a solid stat line in Week 2. Expect him to continue to trend up.

14. Austin Ekeler, LAC vs HOU (RB10) — The Chargers back has been on fire to start the season and is now locked in as an RB1 play.

20. Chris Godwin, TB vs NYG (WR8) — Godwin exploded last week and that continues in an extremely favorable matchup this week.

21. Michael Thomas, NO @ SEA (WR9) — Losing Drew Brees hurts Thomas' value, but he should still see enough volume to be a WR1.

24. Leonard Fournette, JAC vs TEN (RB12) — Like it or not, Fournette is in play this week as a clear three-down back for the Jags.

25. Derrick Henry, TEN @ JAC (RB13) — The Titans are feeding Henry, and that's been good for his fantasy production so far.

26. Marlon Mack, IND vs ATL (RB14) — Last week wasn't the most efficient outing for Mack, but he's still getting a healthy workload in the Colts' backfield.

27. Adam Thielen, MIN vs OAK (WR12) — The Vikings passing game has sputtered out of the gate, but Thielen still sees enough work to be a fringe WR1.

34. Sony Michel, NE vs NYJ (RB16) — Expect to see a lot of Michel in a game where the Patriots are favored by more than 20 points.

57. Kerryon Johnson, DET @ PHI (RB23) — The Lions parted ways with C.J. Anderson, which is good for Johnson. However, this matchup is a rough one.

74. Terry McLaurin, WAS vs CHI (WR40) — The young wideout continues to trend up after yet another solid performance in Week 2.

82. Demarcus Robinson, KC vs BAL (WR43) — Don't get too carried away with last week's numbers.

109. Jared Cook, NO @ SEA (TE14) — Like most of the Saints offense, Cook moves down in rankings this week with Teddy Bridgewater under center.

141. J.J. Arcega-Whiteside, PHI vs DET (WR72) — The rookie should see a full complement of snaps with Alshon Jeffery sidelined this week.