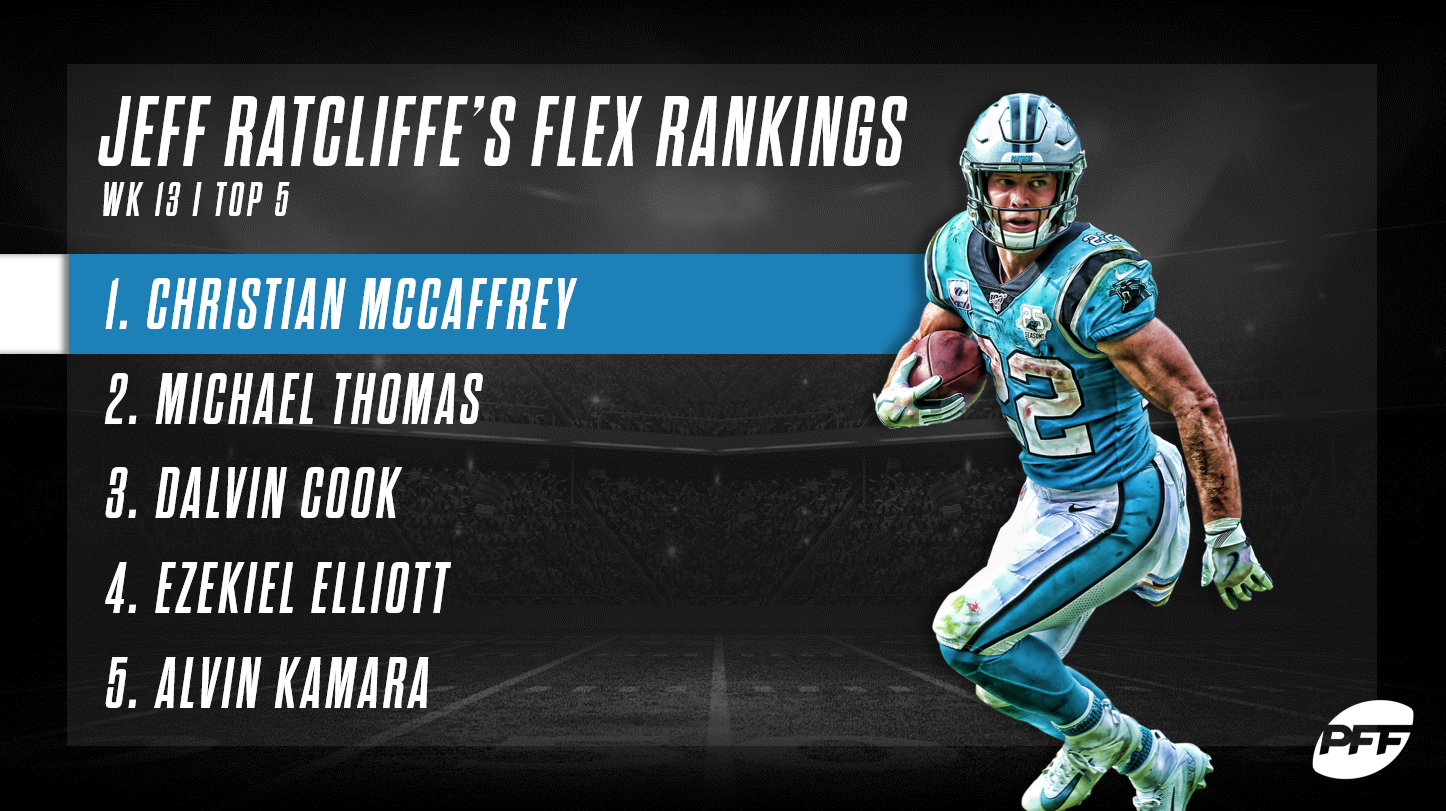 1. Christian McCaffrey, CAR vs WAS (RB1) — Through the first 12 weeks of the season, McCaffrey has scored the third-most PPR points of all time.

4. Ezekiel Elliott, DAL vs BUF (RB3) — The Bills defense held up against a fading Broncos team, but Elliott should have no problem carving them up.

5. Alvin Kamara, NO @ ATL (RB4) — Kamara was a top-five fantasy back in his previous meeting with the Falcons this season.

7. Tyreek Hill, KC vs OAK (WR2) — Kansas City put up over 400 passing yards and four passing scores against the Raiders in their previous meeting this season.

9. Aaron Jones, GB @ NYG (RB7) — Gamescript took Jones out of the Packers' Week 12 contest, but he should have no problem against the Giants this week.

10. Leonard Fournette, JAC vs TB (RB8) — This is a rough matchup, but Fournette should see enough volume to remain an RB1 play.

12. Saquon Barkley, NYG vs GB (RB10) — The overall state of the Giants’ offense has certainly hurts the cause for Barkley, but he does draw a very favorable matchup this week.

16. Melvin Gordon, LAC @ DEN (RB12) — This isn't an easy matchup for Gordon, but the Chargers have made it clear that he's the lead in their committee.

17. Mike Evans, TB @ JAC (WR4) — Evans is a fantasy roller coaster, but his ceiling is higher than arguably anyone else in the league.

18. Davante Adams, GB @ NYG (WR5) — Adams hasn't been as advertised for fantasy purposes, but he's seeing heavy volume and draws a plus matchup.

20. D.J. Chark, JAC vs TB (WR6) — Chark is this year's biggest breakout and he gets a cheat code of a matchup this week.

21. D.J. Moore, CAR vs WAS (WR7) — Over the last month, Moore is second among wide receivers in fantasy scoring.

23. Tyler Lockett, SEA vs MIN (WR8) — Lockett struggled to produce last week, but he's poised to bounce back in this plus matchup.

25. Zach Ertz, PHI @ MIA (TE2) — Ertz was disappointing for a good chunk of the season, but he's been on absolute fire over the last few weeks.

26. Joe Mixon, CIN vs NYJ (RB15) — Believe it or not, the Bengals should actually look better with Andy Dalton under center.

27. Calvin Ridley, ATL vs NO (WR10) — With Julio Jones banged up, Ridley has started to build fantasy momentum down the stretch.

28. DeAndre Hopkins, HOU vs NE (WR11) — Hopkins put up two scores last week, but this is a terrible matchup for the star wideout.

29. Cooper Kupp, LAR @ ARI (WR12) — Kupp's backslide continues, but this is a favorable matchup for the Rams wideout.

37. Jonathan Williams, IND vs TEN (RB17) — Williams has been a bit of a revelation filling in for Marlon Mack, but this is a tough matchup. He's best viewed as an RB2 play.

56. Kenny Golladay, DET vs CHI (WR28) — Golladay's fantasy value is sinking like a stone with the possibility that Jeff Driskel doesn't suit up on Thanksgiving.

65. Benny Snell Jr., PIT vs CLE (RB27) — Expect Snell to again lead the Steelers backfield this week, but gamescript isn't likely to be favorable for a heavy workload.

75. Bo Scarbrough, DET vs CHI (RB31) — Yes, he's a good bet to see a majority of the carries on Thanksgiving, but the Lions aren't likely to move the ball much if Jeff Driskel sits.

94. Derrius Guice, WAS @ CAR (RB37) — We still have a full-blown committee in the Washington backfield, which means we can't start Guice with any confidence.