A lot of information can be recorded from a single game of football. Analytical detractors often cite the fact that the NFL's 16-game season is inherently a small sample and argue that trends we might derive can fluctuate wildly from week to week. In some cases this may be the case, but when you compile data from every game and build a large dataset, you can find actionable insight.

From the fantasy football perspective, we have one goal in mind: Find players who consistently score fantasy points for our teams. To do that, we must evaluate the greatest key to fantasy production — opportunity.

Using a player’s opportunity over the course of the season, we can determine what his expected fantasy points were for a given game, stretch or entire season. From there, we postulate whether players will continue on their current trends or regress toward the mean.

What variables are included in expected fantasy points?

The short answer is: It depends. PFF’s expected fantasy points model was developed by our data scientists to capture as much signal as possible. In order to do that, fantasy points can be projected higher or lower given the circumstances.

Was the receiver in a contested catch? If so, we are less likely to say he will gain yards after the catch. If a player catches a contested ball, sheds a tackle and runs into the end zone, the player's actual fantasy points scored will be much higher than his xFP. This is where we can catch signal, and it presents itself in two ways.

Looking at 2019, we can see that xFP and FP are highly correlated on the season. Each of the four main fantasy positions have an R2 of around 0.96, which gives us some minor improvement over raw targets, touches or pass attempts. 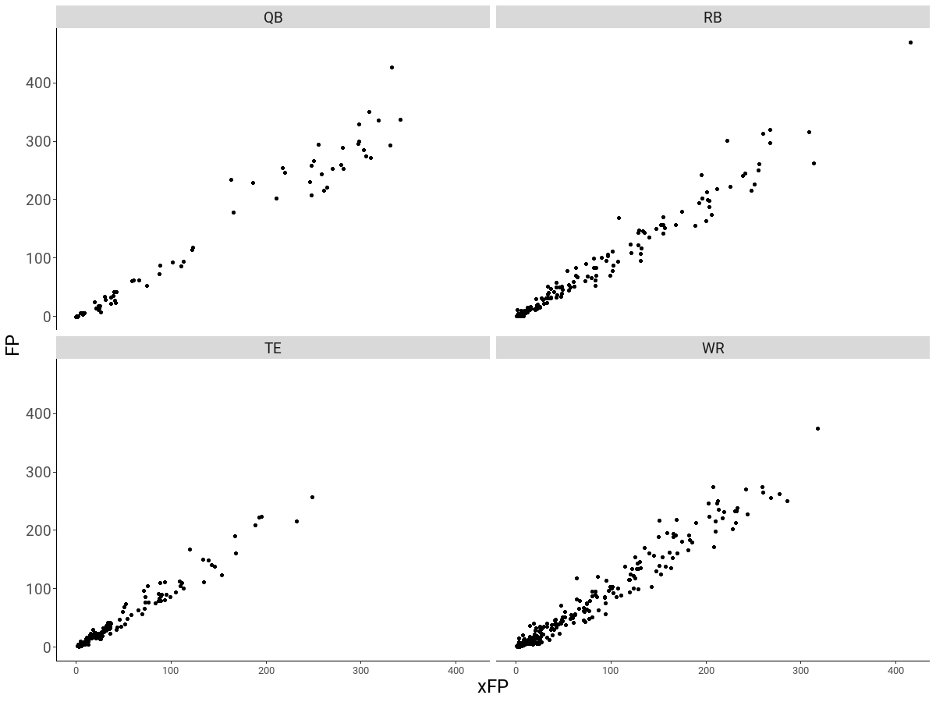 Lamar Jackson did something special in 2019, but will he be able to repeat it? It’s very likely that he sees a high level of success without doing what he did last year for a second time. Dak Prescott is a not-so-dark horse for QB1 at the end of 2020.