Drafting running backs and wide receivers in fantasy football is easy — you just draft as many as you can fit on your roster and mix and match for bye weeks and matchups. Identifying the right guys is more difficult, but that’s at least the strategy. But when it comes to quarterbacks and tight ends, your options are more limited.

As often as not, fantasy managers are drafting only one quarterback and/or tight end. If that person is Patrick Mahomes or Travis Kelce, then fine, put them in your lineup and ignore them until bye week or an unlucky injury. But there are only a handful of those types of names at each position, so there’s a decent chance you won’t have a “set it and forget it” at one position or the other coming out of your draft.

That’s where streaming comes into play. Today, we’re looking at quarterbacks and tight ends you might draft as your starter in fantasy football who might have a tough run early in the year, and the lesser-drafted options who could be streaming options in those early weeks.

(Want to stream your DST options? Scott Barrett breaks down all the how-tos.)

Maybe you aren’t ever benching Rodgers, and maybe Mayfield has played himself into that group as well. But both Newton and Luck are coming back from injuries, and if you’re feeling nervous about them in Week 1 (especially Luck), that’s fair. You wouldn’t be out of line to consider a plug-and-play.

Matthew Stafford, Detroit Lions (@ Arizona): The Cardinals should have had a sneaky-good defense this year, except then Patrick Peterson got suspended and Robert Alford got injured. Now, this is a defense you can pass against even if you are just this average Joe reading this. Stafford, with three receivers and two tight ends who all promise to be relevant? The Lions might be a run-heavy team across 2019, but don’t be surprised if they start as a passing team. 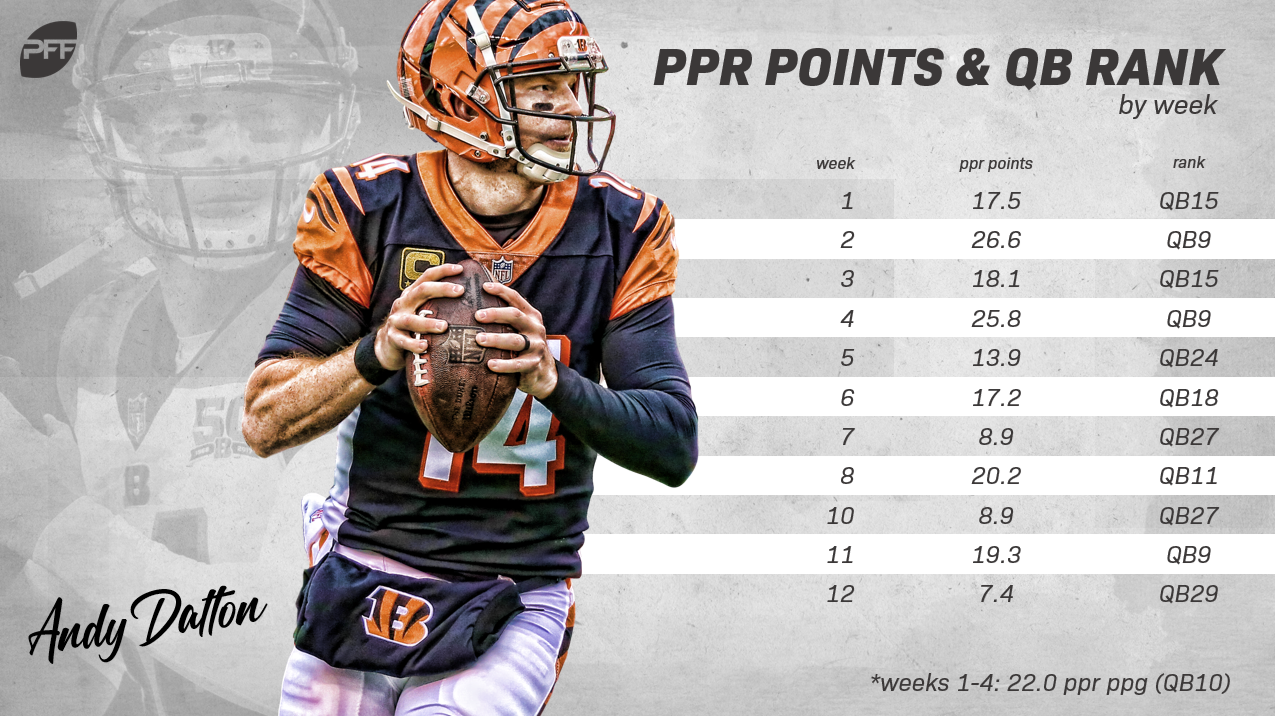 Andy Dalton, Cincinnati Bengals (@ Seattle): Dalton started last season off just fine. He was the QB10 in Weeks 1-4, with two top-10 finishes and averaging 22.0 fantasy points per game. It fell from there for him and the Bengals alike, and A.J. Green is out to start the year, but he draws a Seahawks defense that is a far cry from its Legion of Boom days.

Again, maybe these are guys you are never benching, but if Luck can’t get healthy or Brees starts slow in Week 1, you’ll have to think about it.

Tom Brady, New England Patriots (@ Dolphins): It’s weird to list Brady under the streamers, but that’s where he’s going now. And sure, the Patriots have had their issues against the Dolphins in the past, but this is still about as appealing a matchup as you could hope for, and with Josh Gordon back in the fold, Brady’s ceiling has gone up.

Josh Allen, Buffalo Bills (@ Giants): We’ll see if Allen can improve as a passer in Year 2, but he might not have to against a defense like the Giants have. Look for John Brown and/or Robert Foster as stack options in this one.

We’ll see what the Vic Fangio influence can do for the Broncos’ defense, but it’s already a tough matchup. (This is part of the reason Rodgers was listed as one of the quarterbacks with the roughest first month of the schedule.)

Eli Manning, New York Giants (@ Buccaneers) and Jameis Winston, Tampa Bay Buccaneers (vs. Giants): Two much-maligned quarterbacks facing each other with awful defenses is a streamer’s delight. I prefer Winston over Manning in a vacuum and also have him ranked as an easy starter in our PFF Fantasy staff rankings, but that’s not how he’s going in drafts. With his wealth of weapons against a bad Giants defense in a game that promises a lot of scoring, that’s an easy stream.

We’ll have a good idea how strong Wentz is in his injury return by this point in the season; if he’s 100% and looks good, you probably aren’t sitting him regardless. But if it’s a slow start, you might want to sit him in a tough matchup and look for an alternative.

Philip Rivers, Los Angeles Chargers (@ Dolphins): If Melvin Gordon’s holdout lasts into the season (and into Week 4), the Chargers are probably going to pass more than we currently expect, and that bodes well for Rivers’ fantasy value overall and especially in a Week 4 matchup at Miami.

Dwayne Haskins, Washington (@ Giants): Case Keenum is on track to open the season as the Washington starting quarterback, but with games the first three weeks against the Eagles, Cowboys, and Bears, a change could come really quickly. Would you blame Washington if they wanted to get their first-round rookie his first start in what promises to be an appealing matchup against the Giants? I wouldn’t. Big risk, but big reward.

Identifying probable starters at tight end is dicey, and if you want to say Ebron is the only one from this group who qualifies, I won’t argue. But regardless, unless you have one of the big three, you’re likely to consider streaming at some point in the season.

Mark Andrews, Baltimore Ravens (@ Dolphins): Lamar Jackson loved him some Andrews last year when both were rookies. Now they both have a year of experience. Andrews could be the sleeper tight end in the league this year. 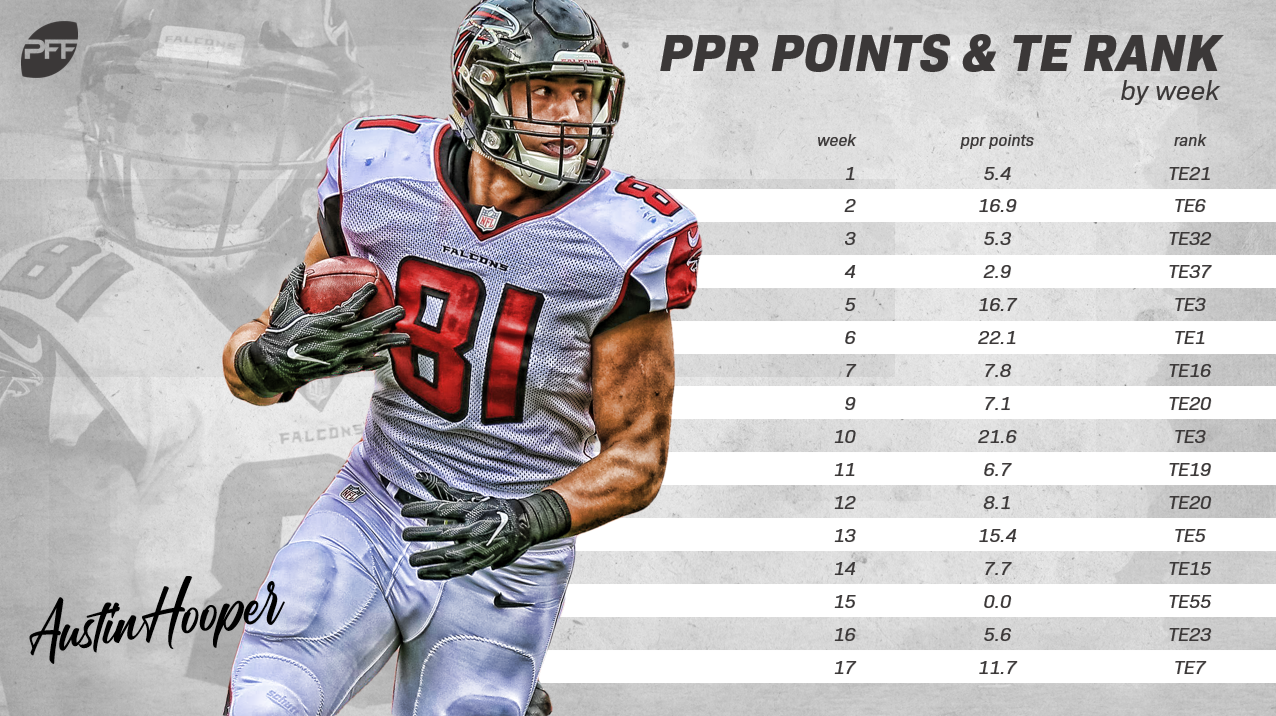 For how well Hooper’s full-season numbers look from last year, he was very volatile on a week-to-week basis. He was a top-10 weekly tight end six times, but outside the top-20 another five. That makes him a tough play in bad matchups. And as appealing as Cook is in Year 1 with the Saints, he has exactly one year as a big-time fantasy contributor. We expect good things, but it wouldn’t be the biggest surprise ever if he reverts back to his old performance.

Tyler Eifert, Cincinnati Bengals (vs. 49ers): The knock against Eifert, now and forever, is health. If he looks healthy and productive in Week 1, he’ll be a great pickup for Week 2 and the future.

Will Dissly, Seattle Seahawks (@ Steelers): Dissly is Eifert on a smaller scale. He was a huge surprise in Weeks 1 and 2 as a rookie, but got hurt in Week 4 and missed the rest of the year. If he shows he’s healthy in Week 1 and has anything like the production he had last year, he’ll be an intriguing streamer.

By Week 3, we’ll have at least an idea of how the Browns will utilize the new and improved offense. Between Njoku, Nick Chubb, Odell Beckham Jr., Jarvis Landry, and whoever else, there might not be enough touches to go around, and if Njoku is the odd man out, you’ll want to look elsewhere.

Kyle Rudolph, Minnesota Vikings (vs. Raiders): Sort of the inverse of Njoku, by Week 3 we’ll have an idea of whether the Vikings will still utilize Rudolph heavily or if Irv Smith Jr. and/or a No. 3 receiver develops in that offense. If Rudolph is getting decent usage, his ceiling shoots up.

Gerald Everett, Los Angeles Rams (@ Browns): Every piece of news about Cooper Kupp’s health has been positive. Still, this is a guy coming back from a midseason ACL tear, and if he’s slow out of the gate, Everett (our No. 4-graded tight end in 2018), could be the beneficiary.

If the concerns about Bruce Arians’ historic tight end usage are true and not just a product of him never having a tight end of Howard’s quality, then he might be the most overdrafted player in fantasy this year. (I don’t believe this to be the case, but I must admit it’s a possibility.) In that case, you’ll want to start shying away from him by Week 4.

Jordan Reed, Washington (@ Giants): Just like Eifert, if Reed is healthy, we should expect him to be productive. Keep an eye on his health and you could find a big profit early in the year.

Noah Fant, Denver Broncos (vs. Jaguars): Will Fant get heavy usage as a rookie? He’s a rookie tight end, so the odds are against him, but by the time we get to Week 4, we’ll have an idea.